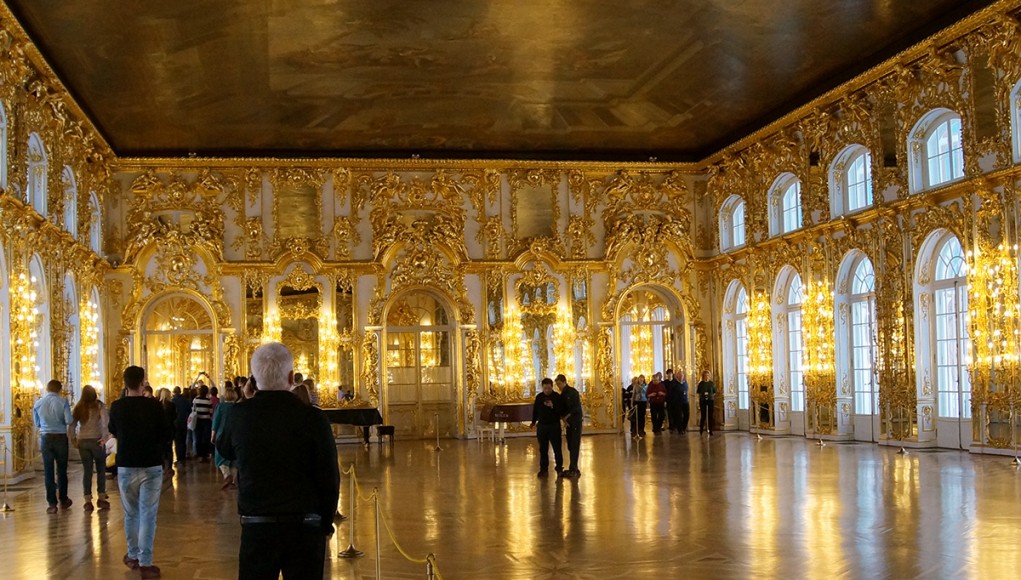 A travel guide to the Catherine Palace in St. Petersburg. 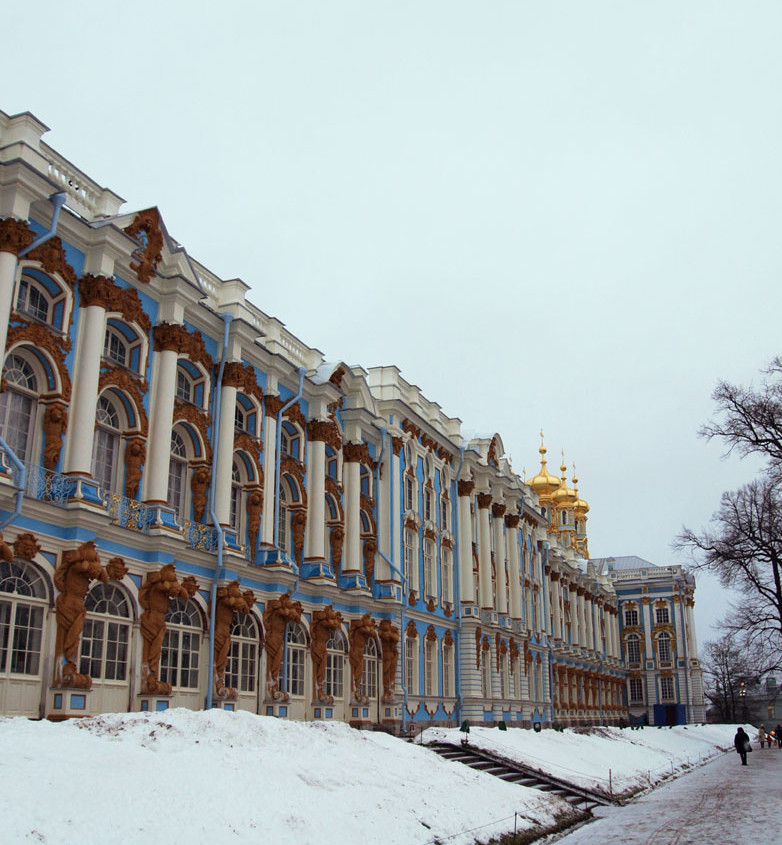 In the town of Pushkin, 25 kilometers outside St. Petersburg, you will find a magnificent respite from city life: the Catherine Palace. It has always been that – a respite. Catherine the Great built it to escape the many obligations of the court. She would rather hunt in solitude. As a tourist, you too shall go hunting there. You, however, will not bring home the antler of a mighty deer, but rather a wealth of baroque impressions from the many sights at the former residence of the czars. Foremost of all the 325-meter long façade and of course the Amber Room, which is sometimes dubbed the 8th world wonder. But let’s take things slowly.

I visited St. Petersburg over New Year, fully knowing that it would be bone-freezing cold. Up to minus 30 reasons why most tourists will avoid the city in winter and one big chance to have its famous sights all to yourself. Instead of thousands, you will compete with hundreds of other tourists for the best pictures. And the cold? What does the cold matter, if you spend the day inside some of the finest museums in the world anyway?

Nonetheless, I did not expect the weather to be so bleary during my stay. Normally the cold would ensure a blue sky. But this year was far from normal. In fact, the temperatures were close to the freezing point and the sky thus overcast. Maybe even that had to be seen as a chance. Russia with its saunas and samovars, after all, offers a culture that is well suited to the demands of darker days.

Getting to the Catherine Palace 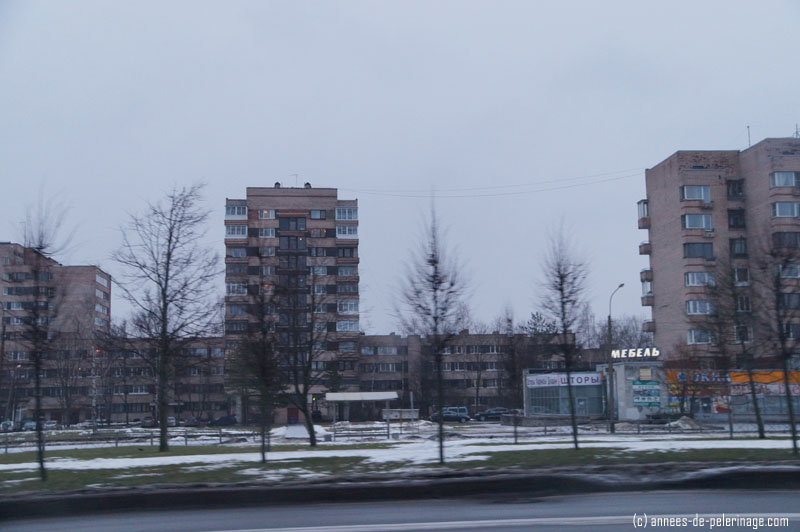 I take a cab from my hotel to bring me to the city of Pushkin, where the Catherine Palace is located. In summer the worst idea you could have, but in winter traffic jams are more or less unheard off. The ride still takes roughly 30 minutes and parades me past the architectural sins of the communist era. It is not a pretty sight and stands in such a stark contrast to what will expect me in Pushkin. But how could you ever understand the Russians, if you haven’t seen this part of the country as well?

The taxi driver gives me his business card; the taxi situation in St. Petersburg is quite precarious. Sometimes you are lucky, and one is parking right in front of the door. Mostly, though, you could wait for hours and not see one. Understandable perhaps, since most tourists are disgorged from buses on a guided trip. For me, that has never been an option. I hate being treated like cattle, ever being driven on to the next highlight. This time, however, I wish I was part of one. The ticket office informs me that before 12:00 am only scheduled groups are allowed in. (This is true for national holidays only.)

Exploring the Park of the Catherine Palace 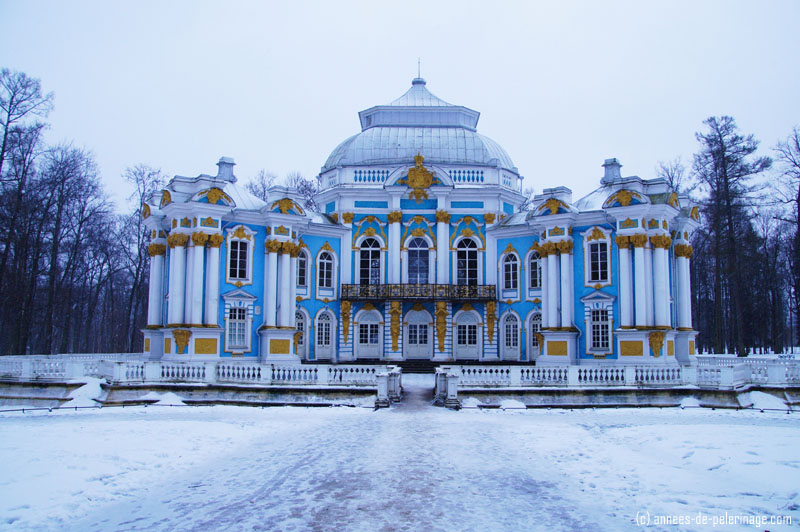 One and half hour is too long to wait in front of the door. So I decide to take the time and explore the vast gardens of the Catherine Palace. Quite a daring decision, since the weather is far from inviting. Wet snow is falling, clouding the breath-taking vistas on the many outbuildings in the park. The Hermitage, the largest of them, presents itself virtually empty. Not even a single tourist to obstruct my view. Incidentally, this is the whole theme of the Hermitage. Here Catherine the Great could withdraw herself if even her maids and attendants proofed to be too much. The whole building is ingeniously fitted with elevators and pulleys. At the empress’ request they were able to lift tables from the ground floor to the secluded main floor – already set and steaming with delicacies. Much to my dismay, the Hermitage was closed. 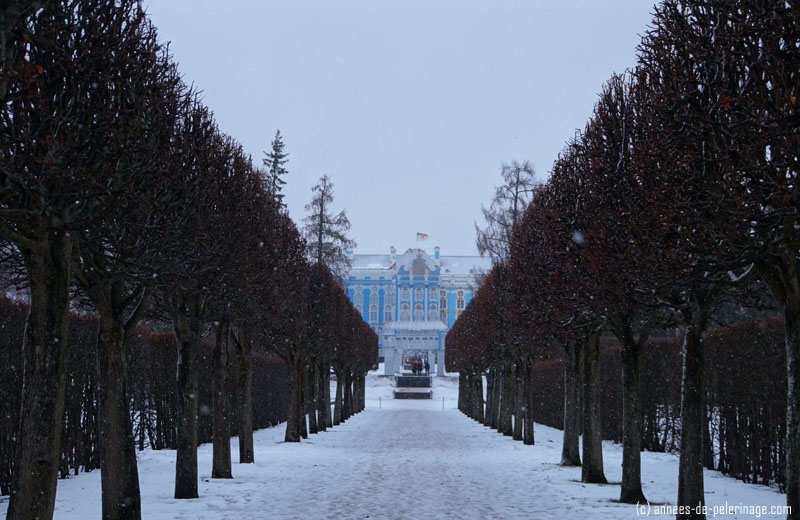 I am forced to spend some more time in a park devoid of tourist. Thinking back that was in fact quite spectacular. There I was at one of the biggest tourist attraction in Russia, if not the world, and all around not a soul in sight.

Inside the Catherine Palace 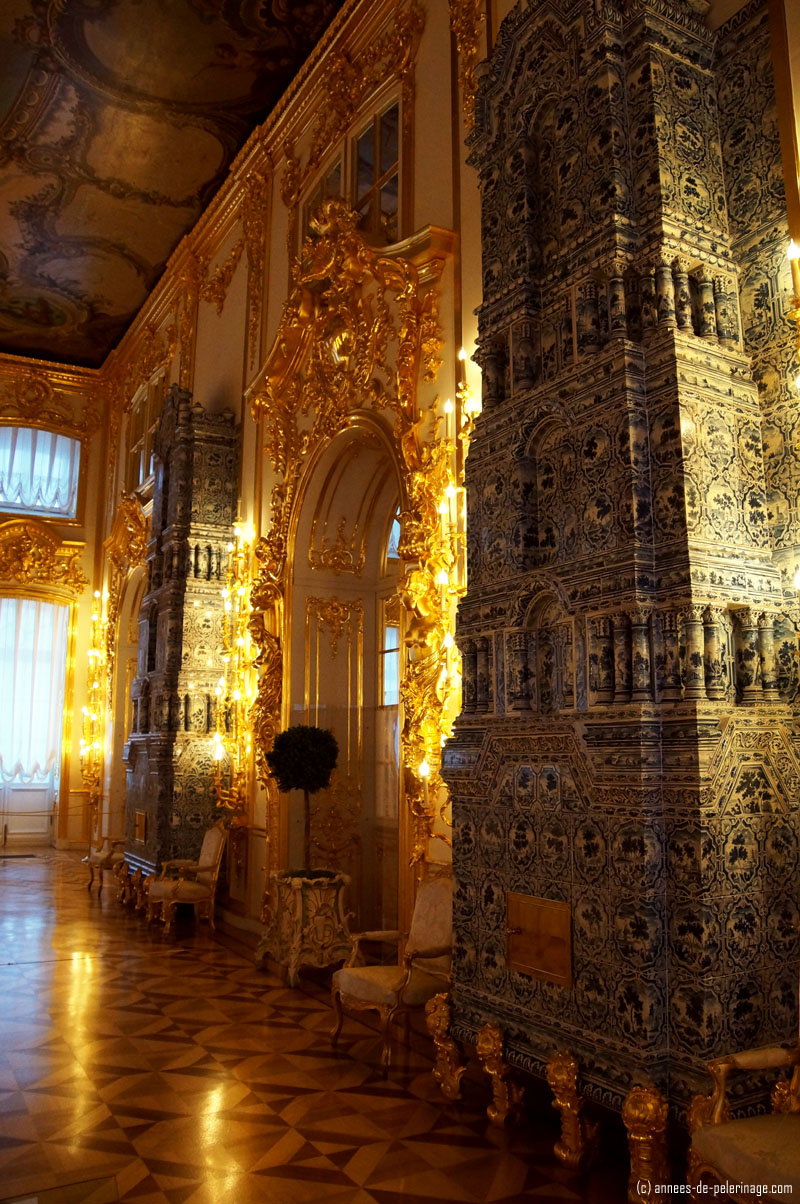 30 minutes later and quite chilled, I was finally permitted to go inside for a fee of 400 Ruble. What follows, will be a lucent dream of gold, crystals and the finest stucco workmanship – once I was able to get rid of my cloak that is. With everyone wearing 20 different layers to keep them warm, the cloak rooms are the biggest chokepoint of all. That actually applies to all Russian museums in winter. I hate to advise queue-jumping but will do anyway. Mostly, however, just walking past the first couple of desks in the cloak room will suffice. 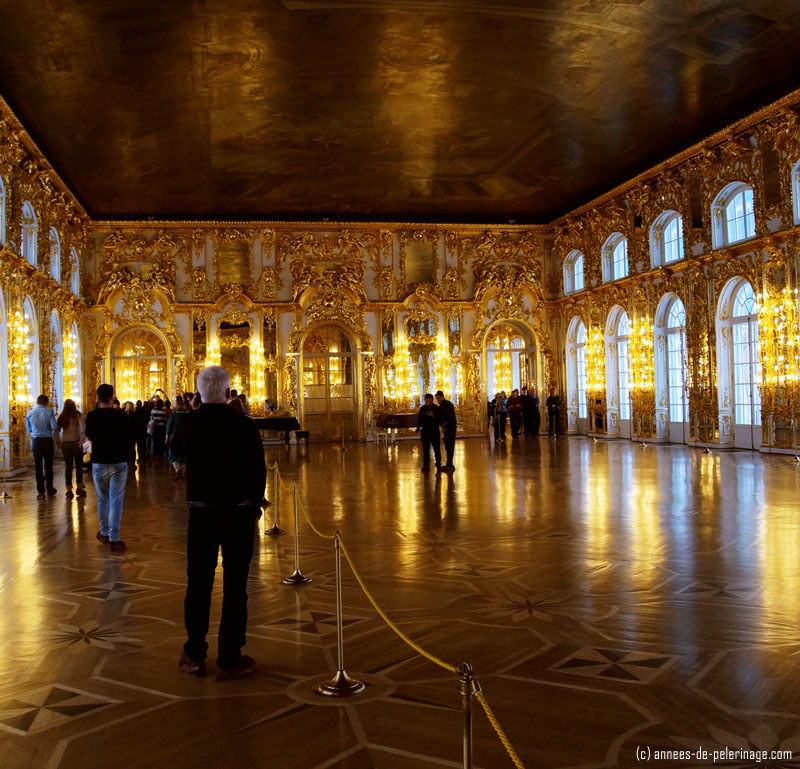 Equipped with an audio guide I start my tour. Little of the Catherine Palace survived the occupation of Nazis during World War II. The entire golden splendor that is presented to me is, in fact, the product of decades of restoration. Yet I was not left guessing what this palace must have looked like 200 years ago, so perfect has everything been reproduced. Every last inch is covered with gold leaf. Where the Russians found craftsmen still skilled in the old stucco techniques is beyond comprehension. 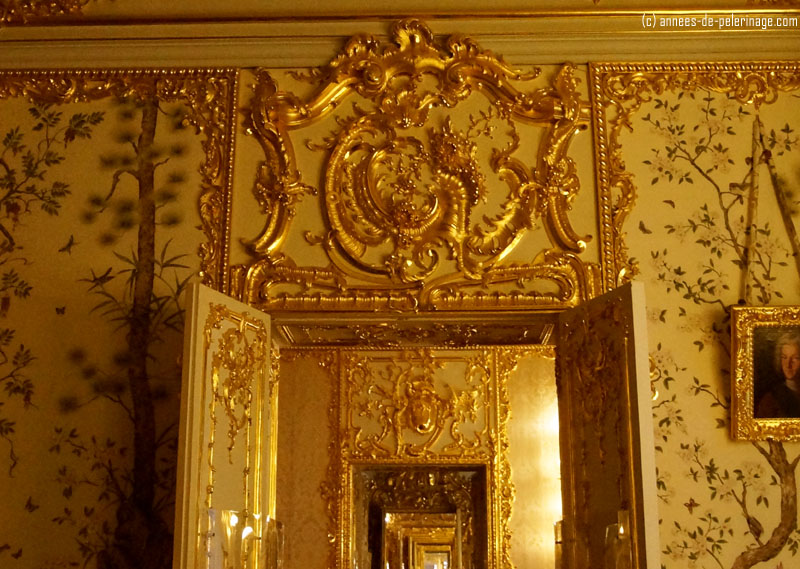 I tour a sheer endless corridor of ballrooms, antechambers and reception rooms. Bartolomeo Rastrelli designed it all back in 1752, my audio guide informs me. I wish I could still recount what I have seen, but my memory fused it all into one golden blob. A theater, dining rooms, dressing rooms, portrait halls, and yet more dining rooms and ballrooms – it somewhat all looks the same to me. Now mind you, I don’t want to appear an oaf. There are in fact subtle differences to mark each room. To me, however, they all pale compared to the rich baroque gold leaf décor. 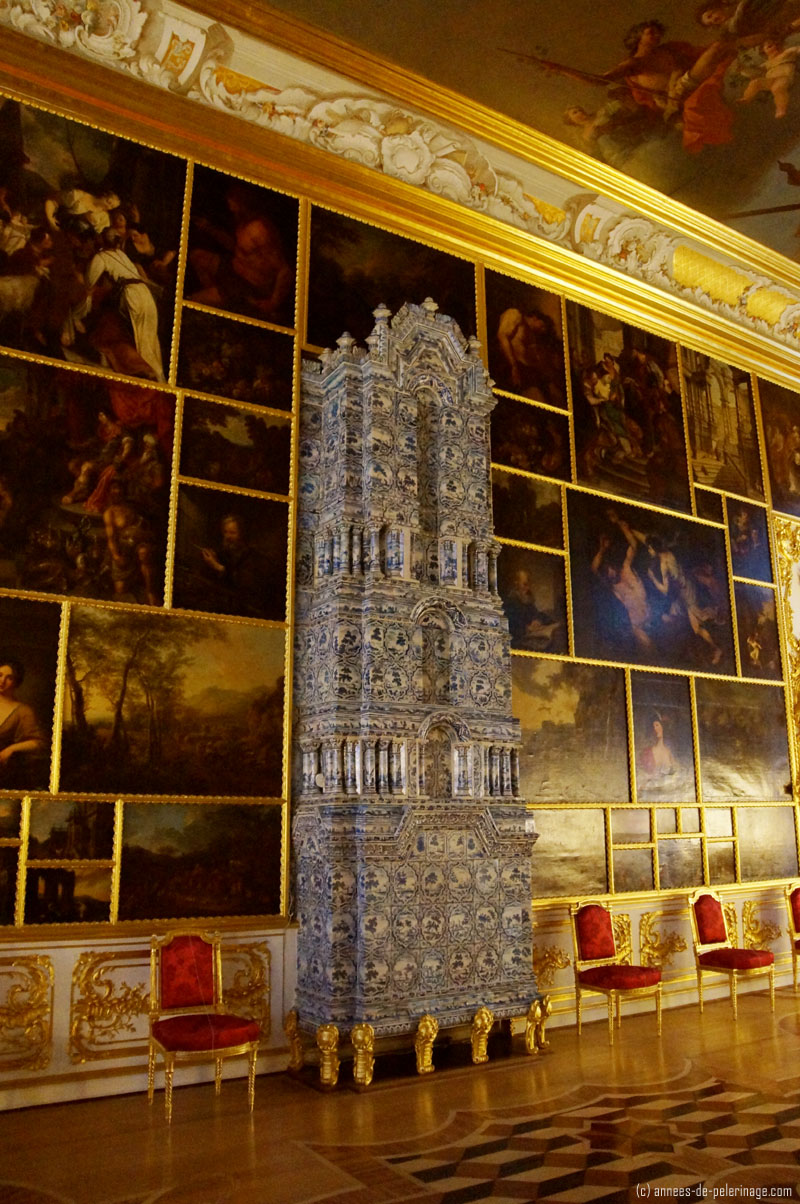 I don’t mean to belittle the architecture or play things down. Quite to the contrary! I think this is, in fact, a marvelous achievement. The palace spans 300-odd meters and still retains that fundamental integrity that lets each room match the next – how could that not take your breath away? 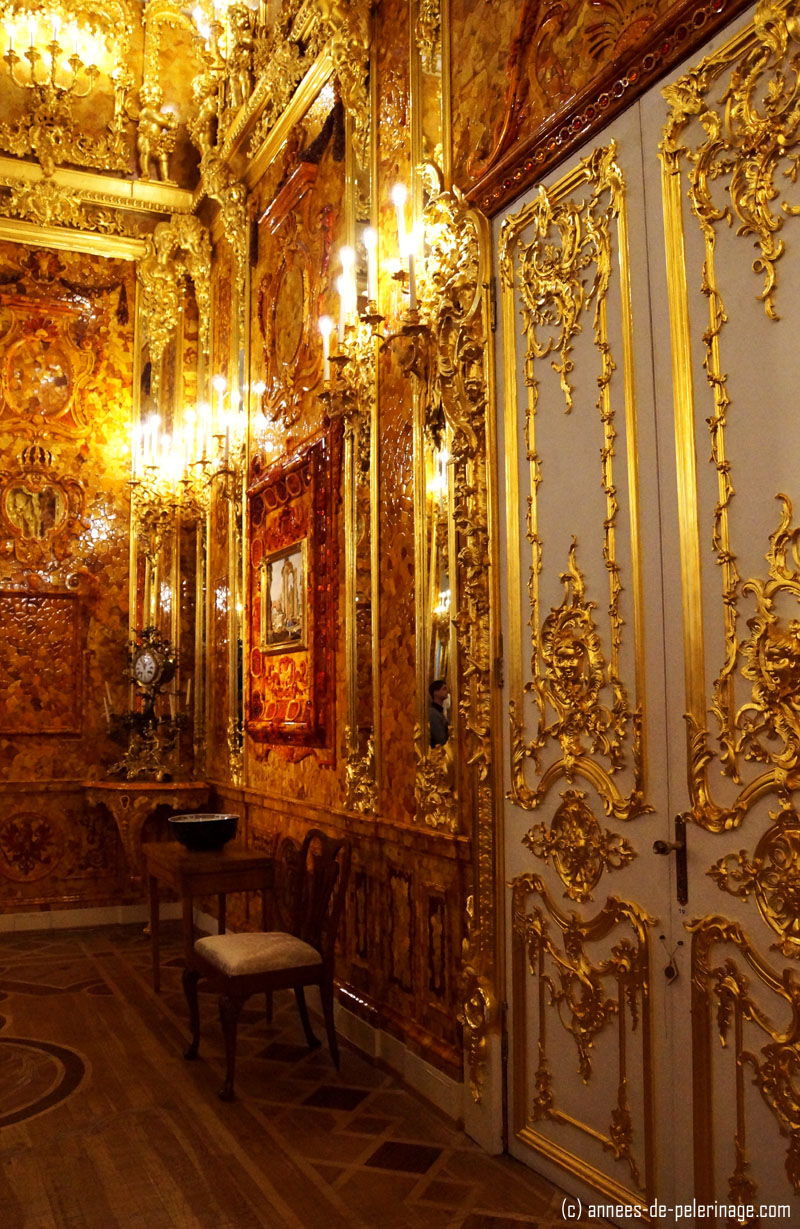 I, for one, stagger onward in my gold induced delirium, until a huge knot of tourists clogs the entrance to the next room. I have, my audio guide announces with much fanfare, reached the Amber Room. This room is, without a doubt, the most famous room in the whole Catherine Palace. A host of well-known myths and legends rank around the Amber Room, and I am not going to recount them here. It may suffice, I think, to point out that the Germans stole the whole Amber Room during their invasion of Leningrad (how St. Petersburg was called by the Soviets) in 1941. Nobody ever found out what happened to the invaluable piece of art after the capitulation. It remains a fact, however, that a joint effort of both Russian and Germans led to the reconstruction of the Amber Room by 2003, using old prints and photographs. 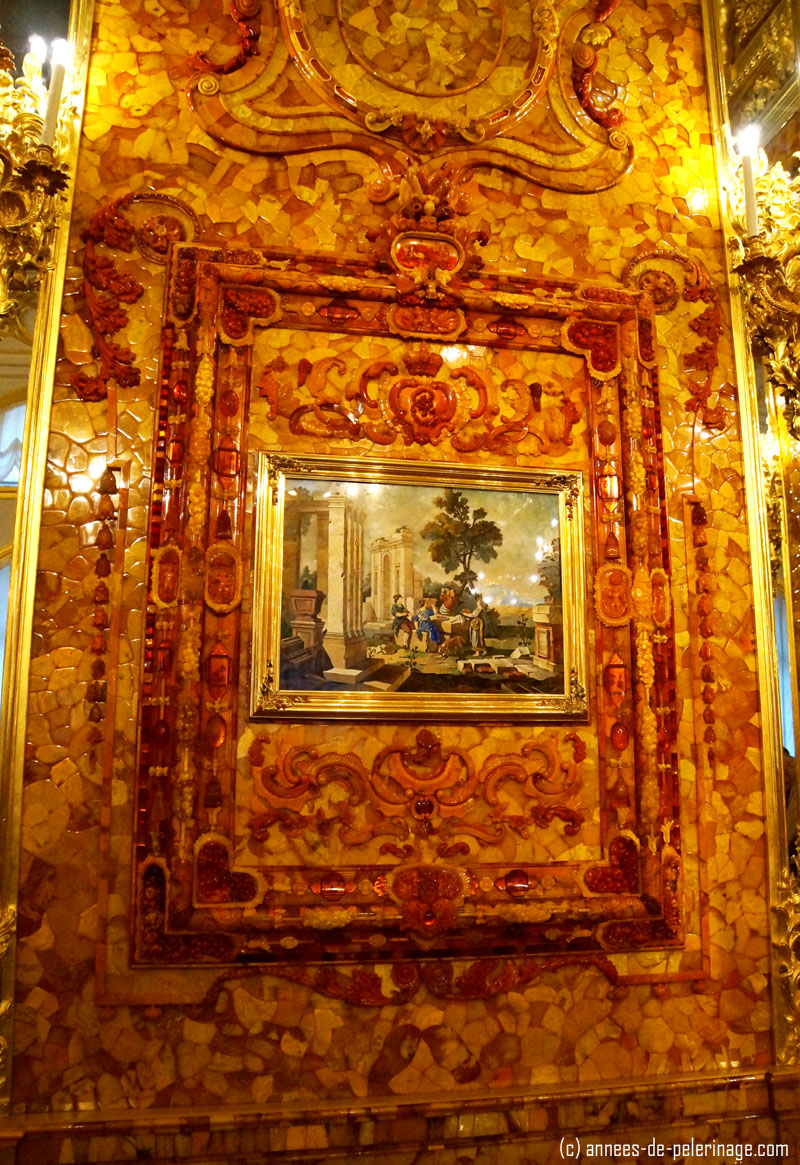 After a short wait, and with yet more tourists pressing me ever onward from behind, I finally make my way inside the Amber Room. Wall panels, mantelpieces, and picture frames present themselves in 300 different shades of amber hues. In all honesty, I have to admit that the room is not what I thought it would be. This might be a general problem when expectations are set to high. It may be that amber carving was considered a lost art. It may be that the fossilized resin is often used as a gemstone and is thus valued very highly. And I’ll willingly concede that the Amber Room is truly unique. Where else in the world would you be able to see such a showcase of craftsmanship? But is it outstandingly beautiful? No, I don’t think so.

I leave the Amber room with the feeling that the legend, and not the actual artistry, made those precious square meters of the Catherine Palace so popular.

Taking my leave from the Catherine Palace 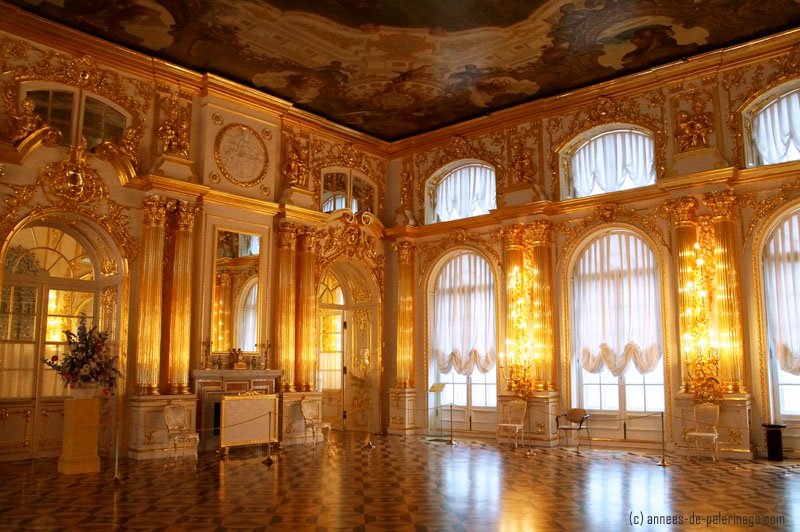 Onward the tour leads through yet another handful of exquisitely appointed rooms and suites.  More gold, more stucco, and more dazzling crystal my mind is barely able to take in any more. The Catherine Palace, I decide, is way too big! I wonder what living here was like for the tsars. Maybe later rulers felt just like me: too much gold and too much self-aggrandizing splendor. It could, at any rate, explain why the last additions to the Catherine Palace totally do without the ubiquitous gold leaf. 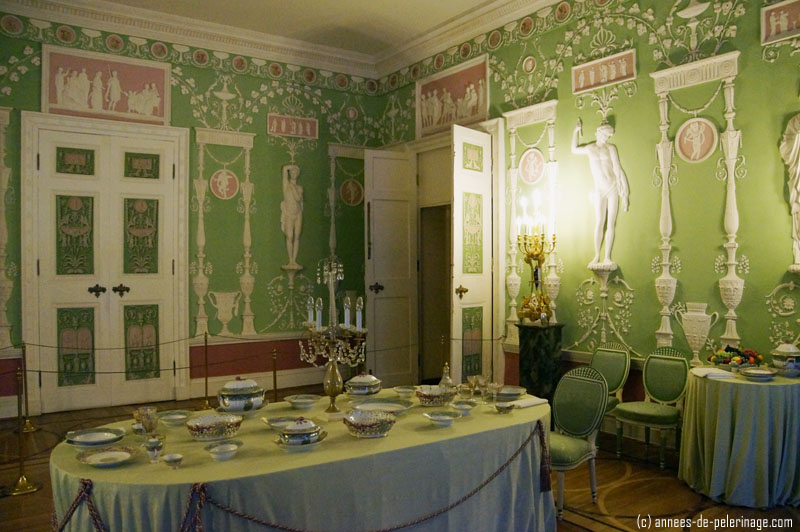 I would not go as far as saying I am glad, en I finally exit the building. For one it was snowing heavily again. But despite the fact that the Russian Baroque does not cater to my personal tastes and preferences, visiting the Catherine Palace was more than worth its time. Nobody can deny that the palace marks a political and cultural milestone in human history. So i’m saying: You do not want to miss the Catherine Palace when visiting St. Petersburg. 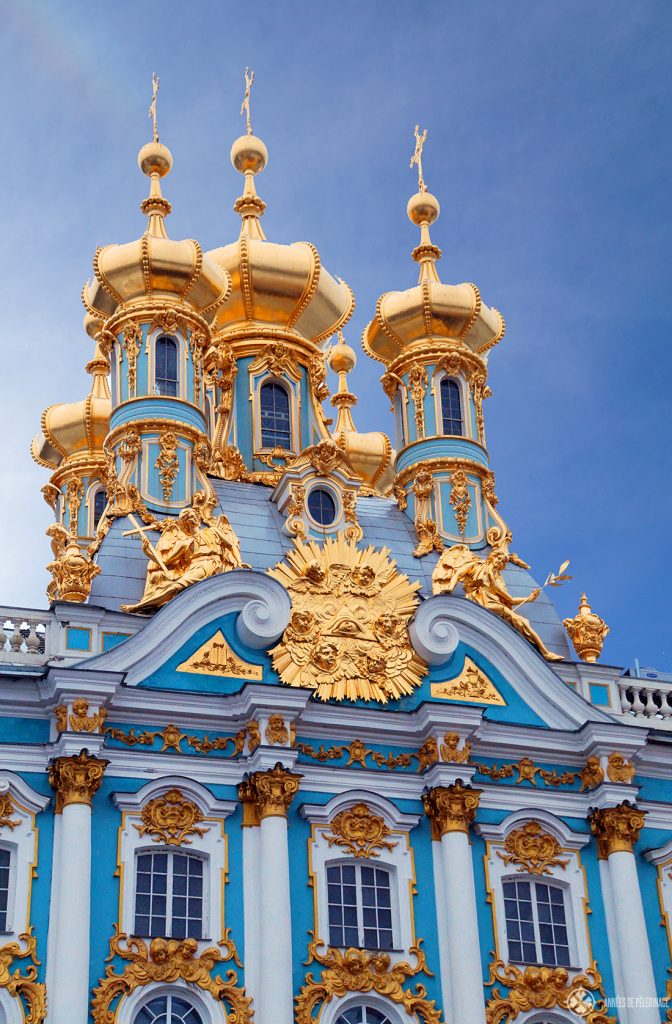 Further Reads for planning a trip to St. Petersburg: