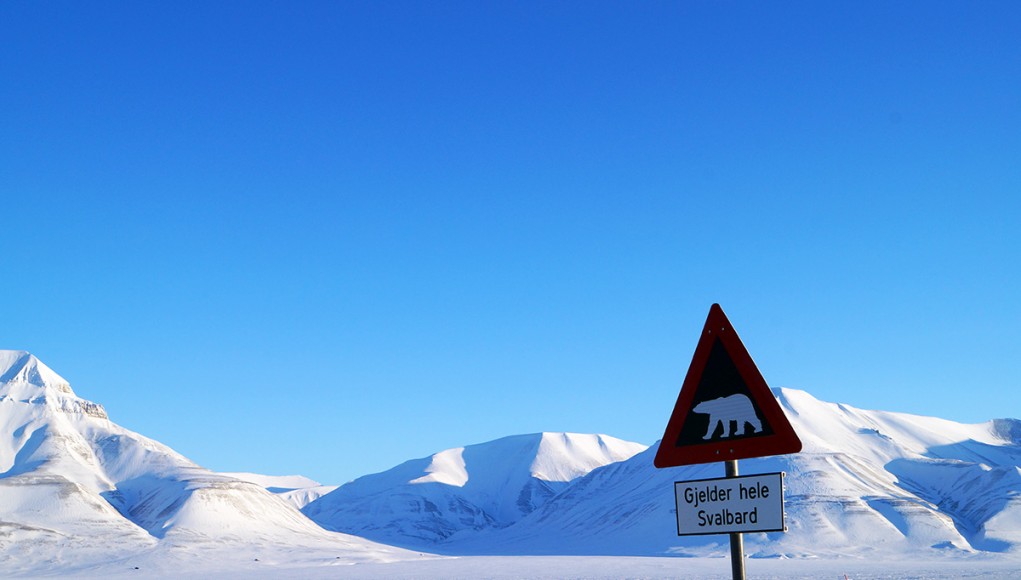 Everything you need to know about polar bear tours in Spitsbergen. This guide will show you how to increase the chances of seeing one in Svalbard. 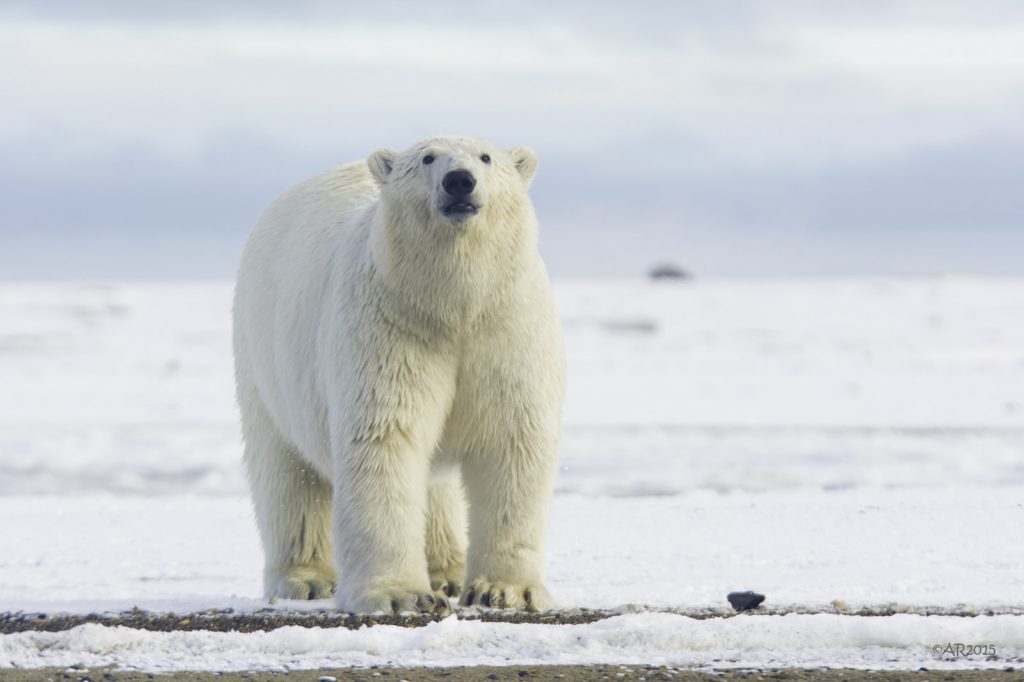 The polar bear is the largest carnivore on land. Spitsbergen alone is home to an estimated 2.000 of those majestic animals. So, it is no wonder that most tourists visiting the Svalbard archipelago want to see the iconic symbol of the eternal ice. Polar bear watching has become a holy grail for all visitors and they all share the same question, namely:

Where can you see polar bears in Spitsbergen?

Now there is no easy answer to this question. Okay, perhaps there is. You can see them on a special polar bear tour. Can. But first of all, you should know that even though there are around 2.000 polar bears in Spitsbergen, the island itself covers an area of roughly 40.000 square kilometers. Simple math will lead you to the conclusion that this leaves 20 square kilometers for every polar bear – not counting the huge mass of pack ice (which is the actual habitat of the polar bear during most of the year). This number alone will give you a good impression on how high your chance of actually seeing one of the constantly migrating animals is. To make this even more visual for you a quote from a tour guide in Spitsbergen:

Essentially you are trying to track a white spot in a white snow waste spanning 20 square kilometers.

So are you already giving up on seeing polar bears in Spitsbergen, Svalbard? You shouldn’t! There are ways to increase the likelihood of actually spotting one after all. So let’s start with the habits of polar bears!

Do polar bears have a favorite spot? 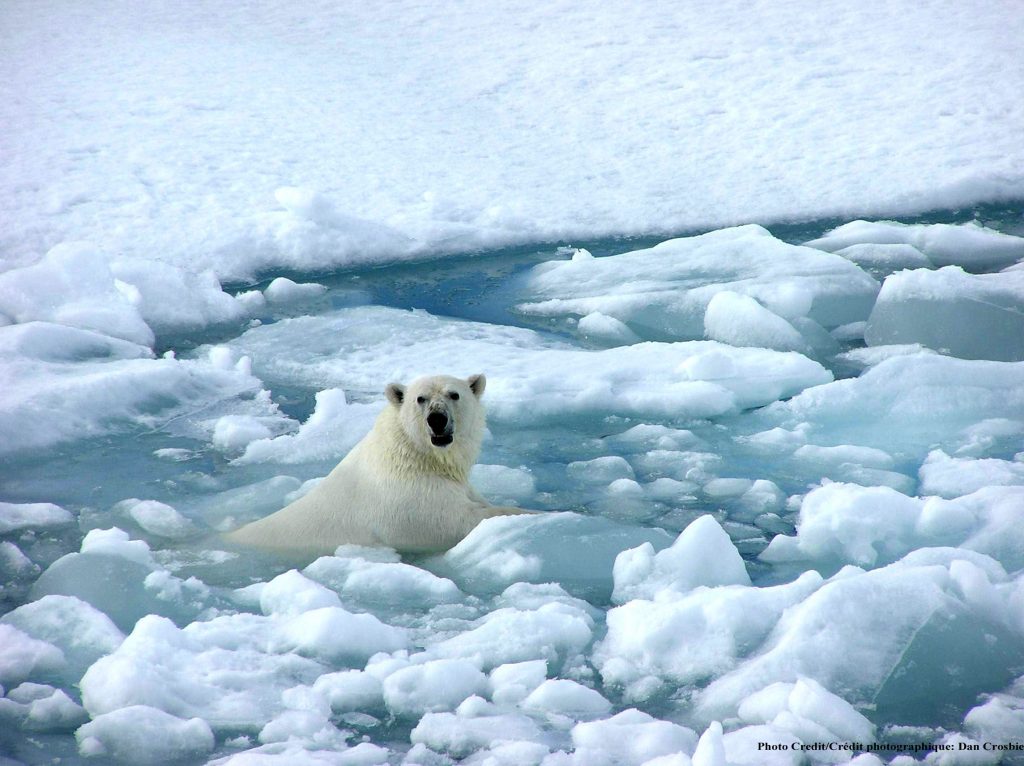 Baring pregnancy and childbirth polar bears don’t live in a den. Actually, they don’t even spend a lot of time on the solid ground at all. They are classified as a marine mammal for a reason. Most of their life is spent out on the pack ice – the place where polar bear tours cannot reach. Only during especially warm summers you will find them inland – for the rest of their time they are hunting down their favorite prey: seals taking a rest near water holes.

This is not to say there are no polar bears ever seen near the settlements in Spitsbergen – only that the closer you are to civilization the more unlikely it is to see one. That has nothing to do with them being shy (to the contrary – they are extremely aggressive), but rather with the simple fact that there is no prey for them there.

So to answer your question: Yes polar bears have a favorite spot and you’ll find it out in the vastness of the polar desert. You will have to brave the cold and go out there on a special Spitsbergen polar bear tour with a local guide.

How do you get to the habitat of the polar bear? 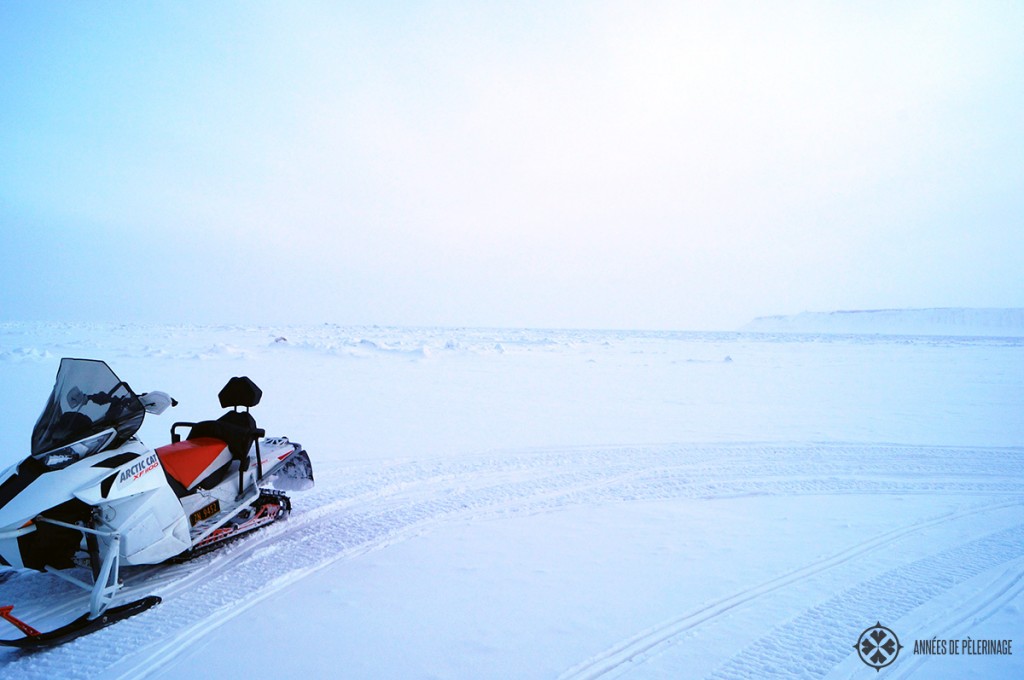 There are two ways to get into the habitat of polar bears: In summer you will be able to take an expedition boat to the melting pack ice regions for your polar bear experience. In winter, however, your only true option is the snowmobile. From Longyearbyen, you will have to cross the mountains over to the east coast. That’s where you will have the highest chance of seeing a polar bear. Some guides will offer tours to other, closer regions as well. But do not be deceived: Your chances of seeing a polar bear there are close to nil. Just ask around in town to verify our claim – citizens are very sensitive to polar bear sightings and will know about recent ones.

For the casual tourist, there are no means to stay overnight close to the polar bear habitats. If you are truly dedicated to the cause and willing to spend both a lot of money and a lot of time, local guides will be able to help you, though. There are some huts you might be able to rent on the east coast. With good weather camping is an option, though you’d have to decide for yourself if you can withstand camping at minus 30 degree Celsius.

When is the best time to see polar bears in Spitsbergen?

Getting to the pack ice – either by boat or snowmobile, sounds way easier than it actually is. Boat travel is possible just a few precious weeks in between July and August. The seaway will not be passable in the months directly before and after the short summer, and even then there may be problems. The way over land, however, is not consistently covered with snow to allow the motorized travel on runners in Summer. So your easy polar bear experience will not be possible.

During the actual winter, you will be facing the polar night and the journey to the East coast is not feasible as well since it will take roughly 4 hours by snowmobile. This pretty much leaves late March to the end of April. Even then you will start your little polar bear expedition very, very early in the morning (while it’s still dark) and barely make it home at dusk. Please be aware that getting there will take the longest time, leaving you with a scant hour or two in the actual polar bear habitat where spotting one is possible at all. Expect to be already half frozen by then!

How to spot a polar bear in winter?

Be aware that you won’t really be able to go on the pack ice with your snowmobile – it just doesn’t provide a smooth enough ground for the runners. So basically the only thing you can do is drive along the edge and hope a polar bear is near the edge. It is advisable to frequently stop and use your snowmobile as some kind of understand (or rather polar bear stand) since the pack ice usually features high protrusions blocking a direct line of sight at the average eye level.

Also, do take your time and thoroughly scan the landscape for any movements. You will not see the polar bear at first – remember you are looking for white on white somewhere hidden in the twilight of the fading arctic light. The movement will be your first hint. If you can, try to bring some binoculars along. Since the snowmobile ride is very bumpy, make sure to cushion them somehow so they don’t break. A knowledgeable guide will be your main asset! 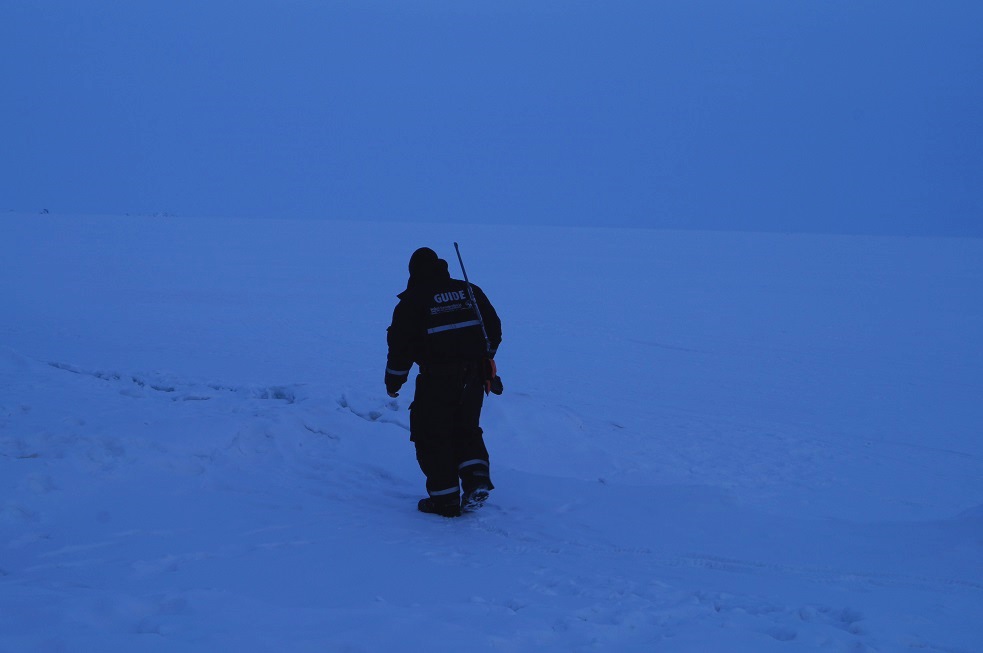 But please, be not disappointed if you won’t see a polar bear. Like I already pointed out chances are extremely slim. In Longyearbyen, they say that for every 1.000 visitors coming to Spitsbergen only one gets to see a polar bear. But let that not discourage you. The ride to the pack ice leads over majestic glaciers and along snow covered mountain ranges. You will see reindeer and if you got a good eye maybe even a rock ptarmigan (which is the only land-inhabiting bird residing in Spitsbergen the whole year). Since you will skirt along the coast there is a high chance you will also see seals resting on the ice near their water holes. So essentially I am saying: The journey is well worth the time and the money, even without the polar bear! (Read my guide to things to do in Spitsbergen to plan your stay there). 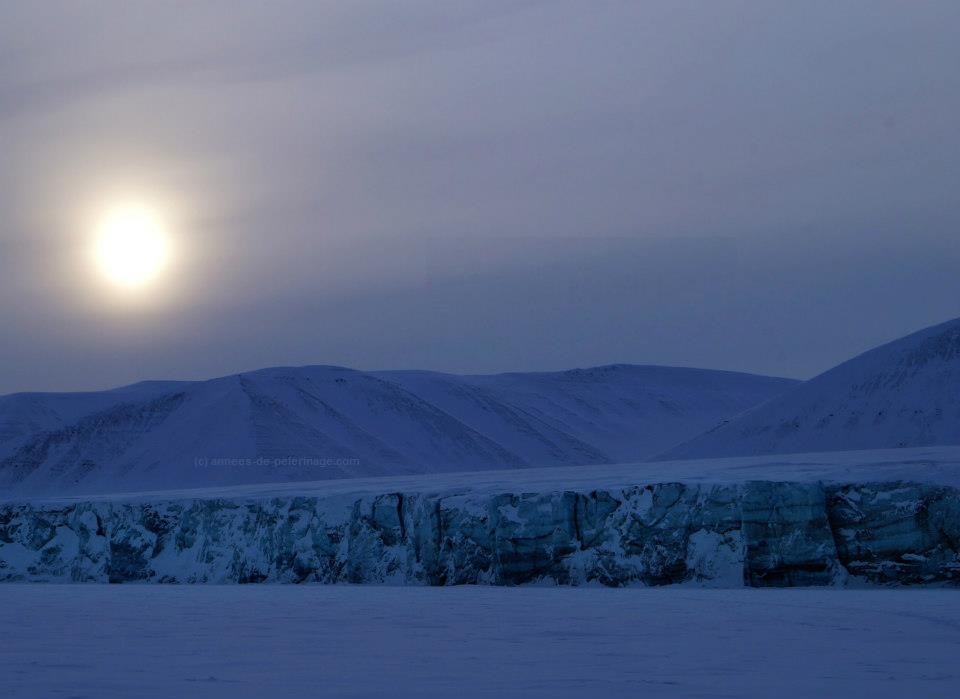 Did I see a polar bear?

The answer is yes, I did! In fact, I was lucky enough to see a female polar bear with her single cub. That was late March – about the time female polar bears dare to leave their den for the first time after the birth (which takes place roughly three months earlier). This, however, was a pure chance of the highest order. 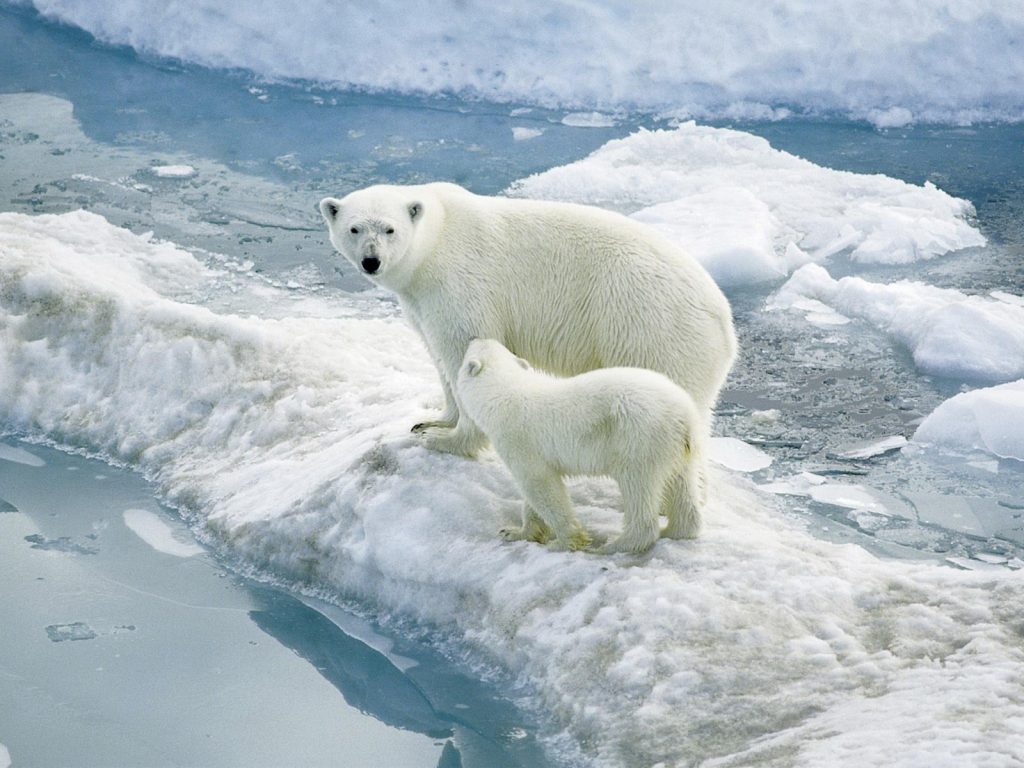 Once our tour group spotted the couple we had to stop out of safety considerations. That was roughly 700 meters away and did not allow for a proper picture, especially since the sun was already starting to set. If you decide to go on a polar bear watching tour (as I recommend you to do despite the low chances!) you will also get to know true cold. At the time I saw the polar bear mother with her little one merrily following her, we had been out on the snowmobile for 6 hours – at roughly minus 30° Celsius. You can imagine how cold my hands were at that time, fumbling around and desperately trying to press the trigger in time. Also be aware that you will be sitting on your snowmobile, maybe even driving around. So all in all the chances on the perfect snap-shot are virtually non-existent if you don’t happen to be sitting in a helicopter and have a telephoto lens longer than your arm.

Out of courtesy I attached a picture of the tracks those two left in the snow (please excuse the severe editing – the picture was taking close at dusk!). The picture of the ice cave that follows directly afterward was the place they apparently took a longer rest before they walked away out on the pack-ice to find some food (which was when we saw them). 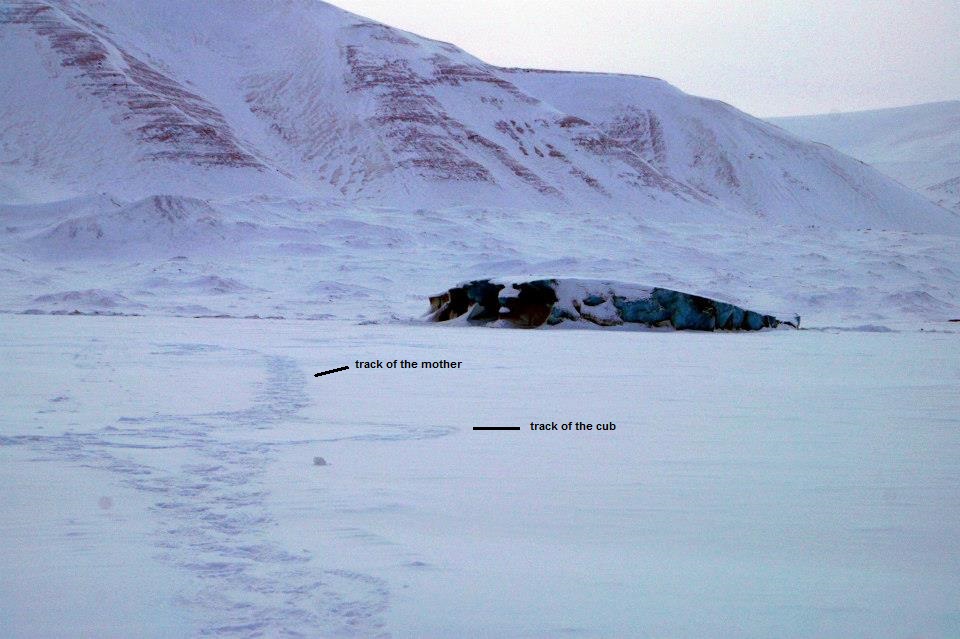 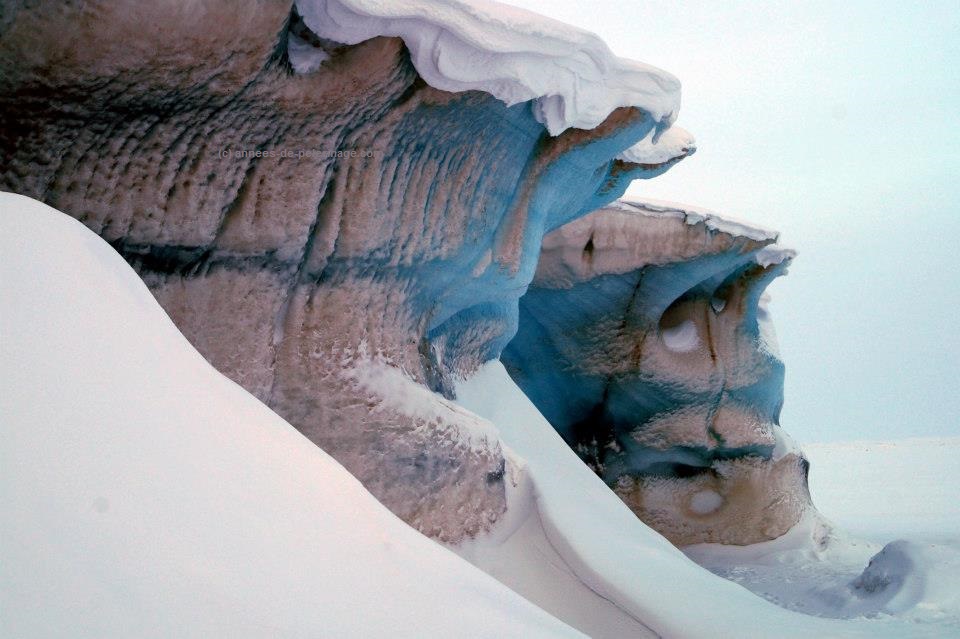 Please be aware that the polar bear is considered a vulnerable species. It is prohibited by law to do anything to endanger the life of a polar bear, barring self-defense. In fact, the Sysselmann (the political head of the island) decreed that closing in any further on the polar bear once you spotted him is prohibited. Meaning you probably won’t get closer than 500 meters – at least not if your guide / polar bear tour company knows his business. Getting closer can be dangerous for you (in fact, groups are required to take along at least one gun once you leave the vicinity of the settlement)! But also for the polar bear. They might decide to flee from the noise of the snowmobile and thus burn an excess of calories. This could, in fact, lead to death if you happen to stumble over a mother shortly after childbirth (since they don’t feed at all during the long months of pregnancy and the weeks they wean their baby cubs in their maternity den) or a male after a starving summer. So be careful and don’t endanger any wildlife by getting too close, lest you unsettle the narrow balance between life and death in the polar region.

Enjoyed my guide for making the most of a polar bear tour in Spitsbergen? Or do you like to add something from your own experience? Leave your reply below! 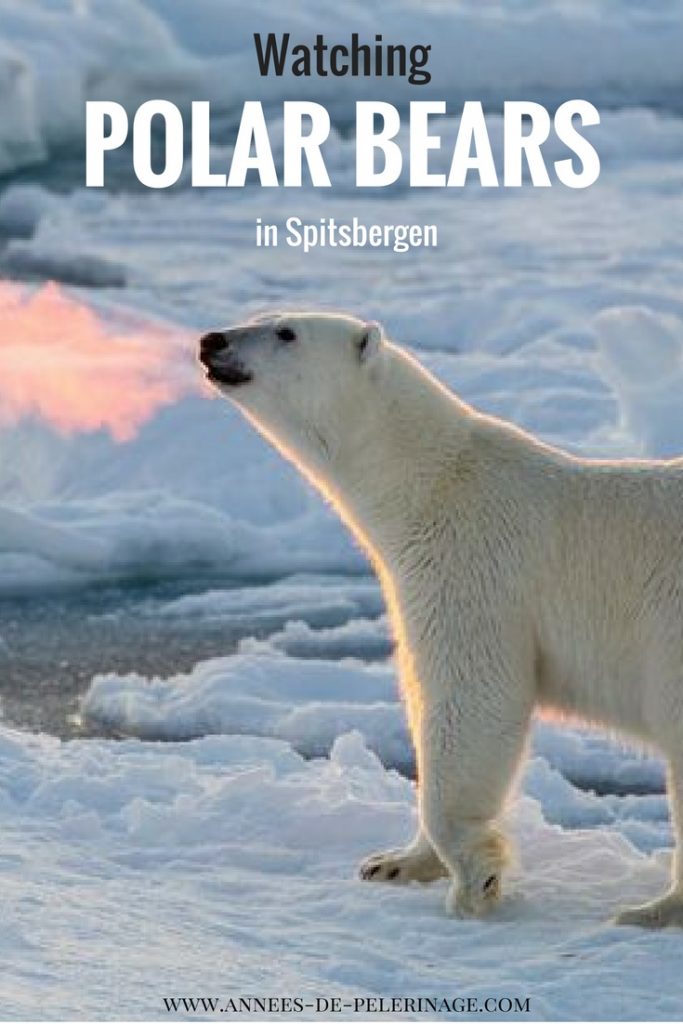 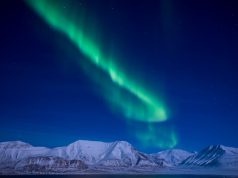 The 10 best things to do in Svalbard / Spitsbergen 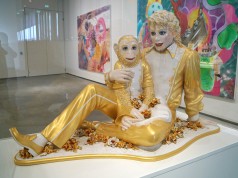 Astrup Fearnley Museum in Oslo – contemporary art at its best