Home Travel guides A rare encounter: Seeing a Tapir in the Amazon rain forest of... 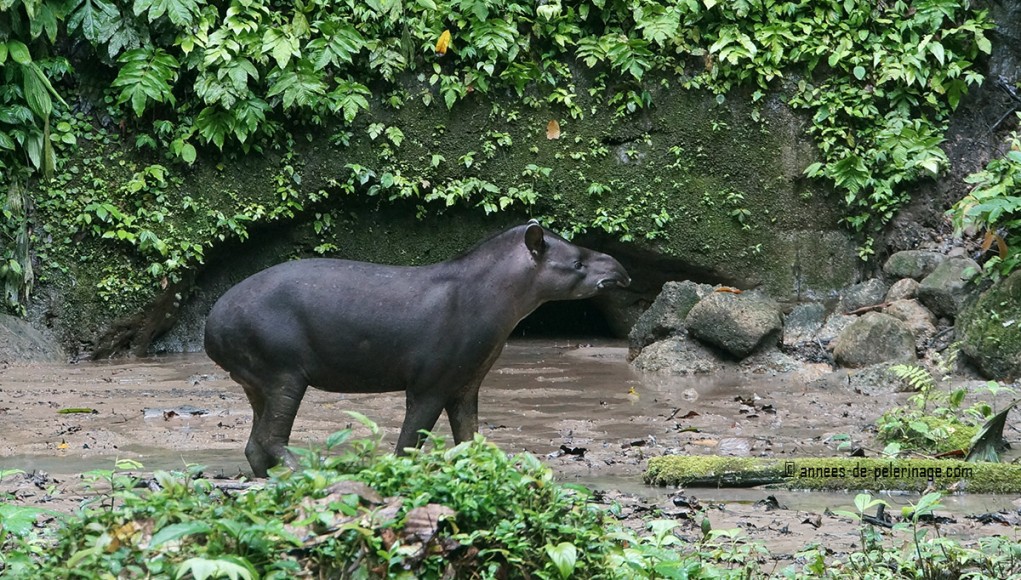 An authentic account of a rare encounter with a tapir in daylight. Seen in the amazon rain forest of Ecuador at a clay lick in the Yasuni National Park. 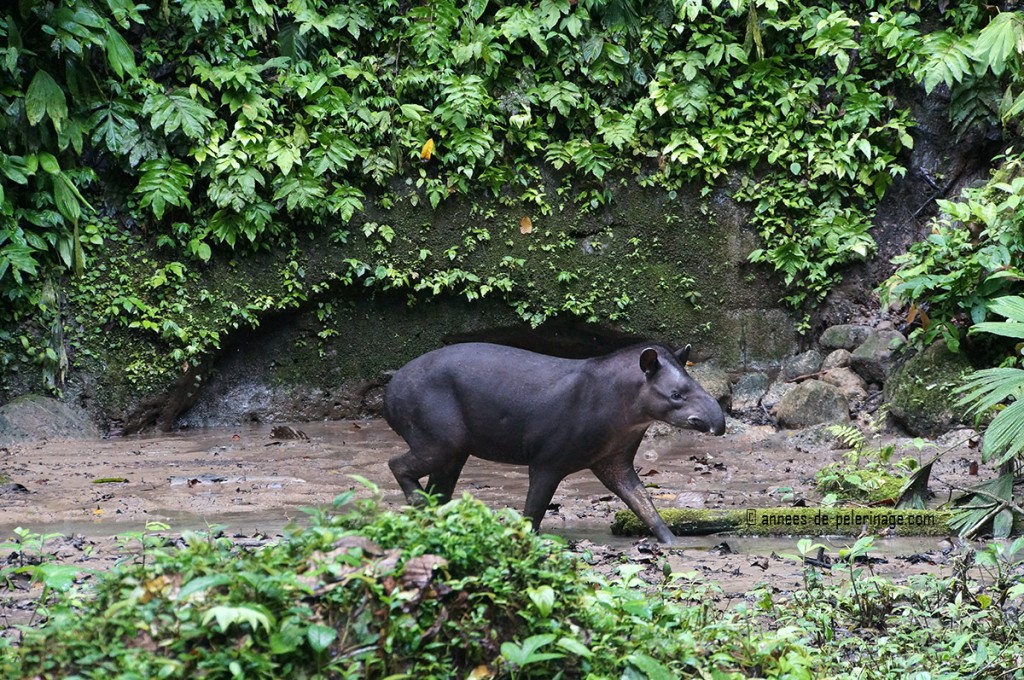 Rare is the moment to overwhelm an experienced traveller. A host of memories from years of travelling form a backdrop that prevents me from being truly impressed by any situation. It often feels like I’ve seen it all or knew it was coming. Still I will never forget when a wild South American tapir suddenly came out of the underbrush of the Amazon rain forest to silently drink water from a clay lick. Here is how that happened:

Starting out with something completely different in mind

For me my tapir adventure started in Ecuador. To be precise in the middle of the famed Yasuni National Park. I stayed there for a bit under a week and came well prepared. I knew that Yasuni National Park is the place with the highest biodiversity on earth. But it is also one of the places with the least species-density. On top of that, spotting even the tiniest insect in the insanely competitive surroundings of the Amazon rain forest is very hard. Everything preys on everything and thus everything hides from anything. Without a guide you can walk through that forest for hours and literally not see a thing – least of all such a big mammal as a Tapir.

Tapirs are the largest mammals of South America. They are an endangered species and mostly nocturnal. Their habitats range from 1 to 8 square kilometers. If you want to see tapir anywhere in the wild in Ecuador, these factors have your chances drop somewhere between nil and no percent. Especially considering that we are not talking about a square kilometers of wide open land, but the dense foliage around the Amazon River, where seeing anything past the next 10 meters is close to impossible.

But there is one exception: Clay licks. Clay licks are patches of open clay that can be found around the Amazon rain forest where generatios of parrots will come to get their daily dose of minerals (they need that to puffer the acids of certain seeds in their digestion tracks). One very famous clay lick is the Napo Wildlife Center. And I decided to head there on a somewhat overcast day.

There is a little shelter for bird watchers to hide in and that’s where my guides took me to await the approach of the macaws and parakeets. Each day they arrive around the same day. Nobody really knows why, they just do it.

A more than unexpected visitor

On this particular day we heard them sitting in the trees and tweeting like mad, but not daring to come down to the actual clay lick. My guide informed me that they must be afraid of something: “Could be a hawk, or any other predator. I dunno. But let’s wait, they will come!”. But it was anything but a hawk! It was a lowland tapir (tapirus terrestis) desperate in need of water. Equipped with binoculars I was scanning the trees and surroundings for any parakeet sightings for more than 2 hours. Nothing really happend. The parakeets seemed to be coming closer only to fly off again. To tell you the truth we were pretty close to packing our things, when suddenly I saw this huge, huge dark mass slowly gliding through the forest. 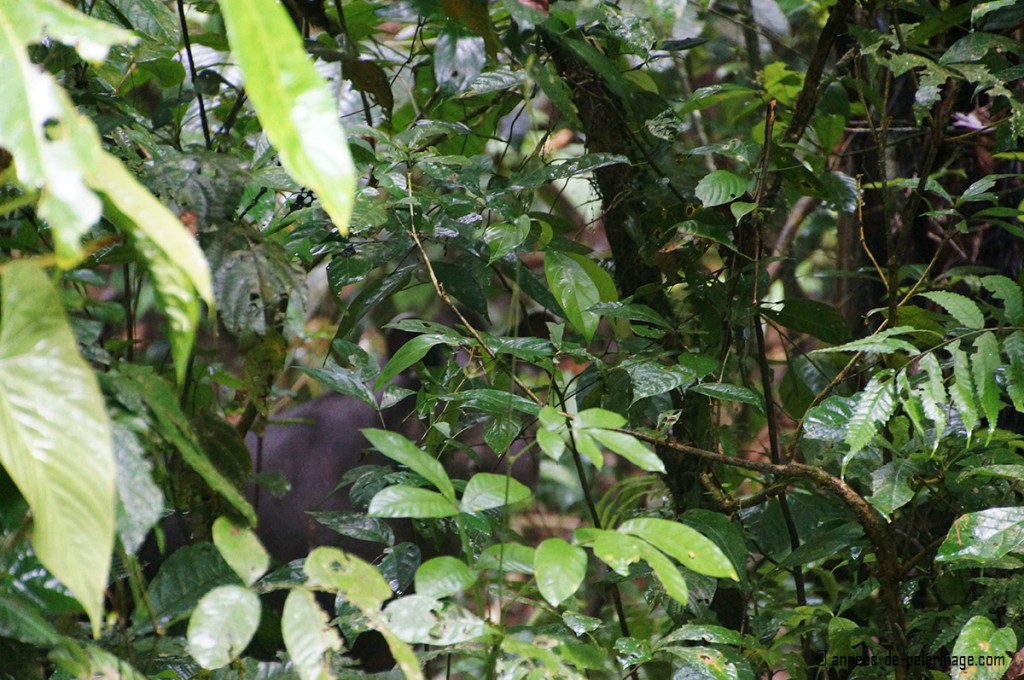 My heart began to race, my mind sort of filled in the blanks, while my hands desperately gripped for my camera. Please lord, let me shoot a good picture of the tapir, was my only wish. And luckily I got that one picture (damn that autofocus!), but a sudden move from one of the guides made the tapir bolt into the dense foliage. In hindsight I shouldn’t have exclaimed my spotting so loudly. Ah the mistakes of the unexperienced!

Still – only seeing that wild tapir for 10 seconds and I was feeling happy like a princess on her 18th birthday. In my state of blissfull elation I was already mentally preparing this very article and how to best to hide the fact that I only got that one crappy picture. But to give things perspective: My guide later told me that this has only been his 5th tapir sighting – and he has been living in the Amazon forest all his life (he was one of the indigenous people).

But curiosity had me checking the forest. Maybe the tapir didn’t bolt at all? My guides all were like: “No chance, he bolted!”. But again I carefully scanned the dense foliage and after not too long I spotted a dark blotch around a bush. There! I silently uttered between breaths and everyone got really quiet again. The guides confirmed my suspicion and told me to be very, very quiet. Maybe the tapir would come back?

So there we sat, very silently, hidden behind the concrete walls of the bird observation station – with success. After maybe 5 minutes the tapir, firmly fixing on it with my binoculars, started moving out into our direction again. Would he come towards us again? Would he hear or see us?

Tapirs are nocturnal and don’t have the best eye sight. Ancient as their genetic line is, they apparently don’t have a good sense of smell or hearing either. I’m fairly positive we were quite loud (despite all our efforts staying silent). Yet the Tapir did indeed get ever closer… 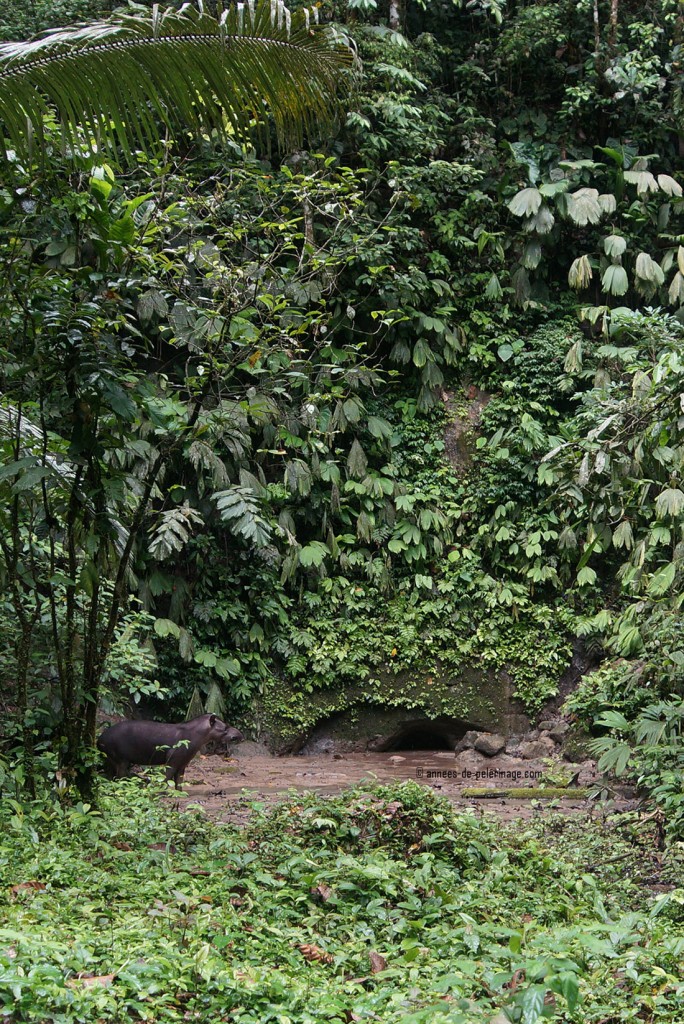 …until he silently entered the little clearing of the clay lick. It was such a surreal moment. There you have that huge animal, probably weighting around 200 Kilogram, walking through ankle deep mud and he was not making a single noise. I was afraid the sound of my camera, the mirror clicking with each picture, would scare him away. But the tapir seemed unimpressed. It almost appeared like it was trying to present me his best side for the perfect shot!

But something told me the tapir was not at ease. Repeatedly he was checking his surroundings, while crossing the clearing, without actually doing anything there. Tapirs, you must know, are known for wallowing in the mud, much like pigs do. Instead he just passed through an entered the forest again – waiting. 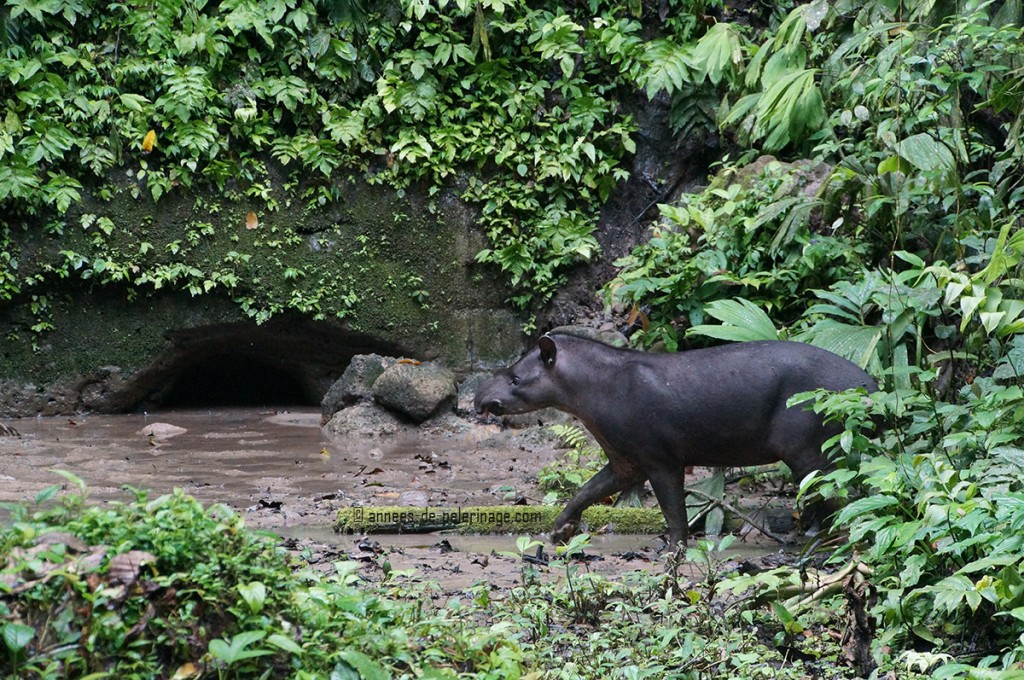 Only after some very long seconds of us being very quiet did he enter the clay lick again. With measured steps the tapir approached the little puddle of water at the far back of the clay lick to drink like mad. 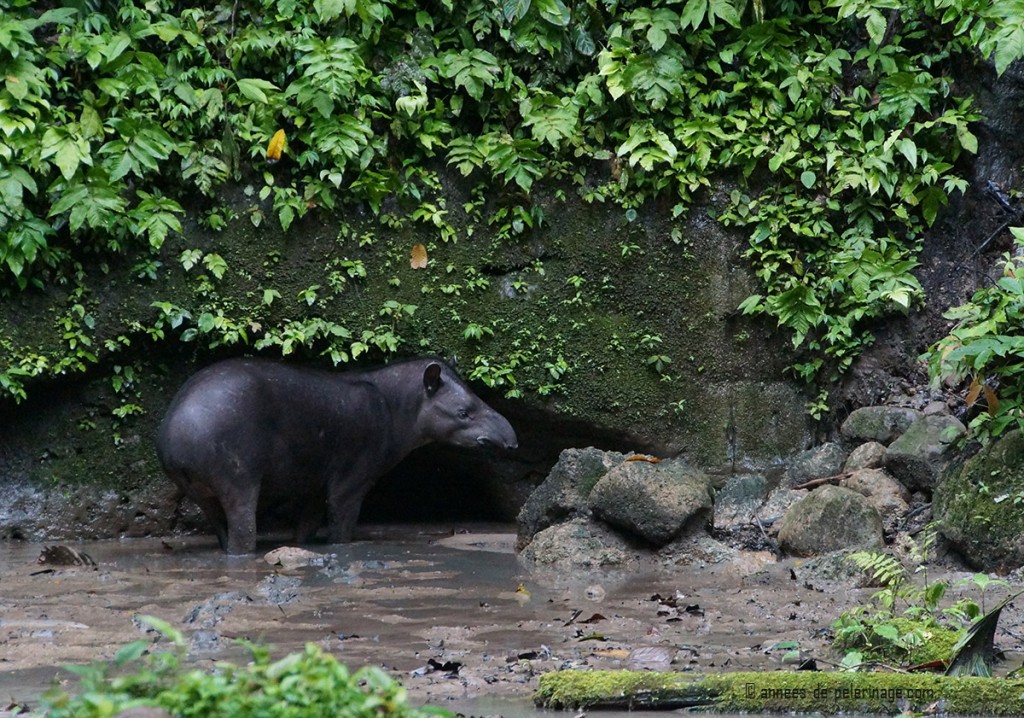 Looking this way and that way ever so often, it still took his fair time to satisfy his thirst. Only then did the tapir silently leave the clearing again. 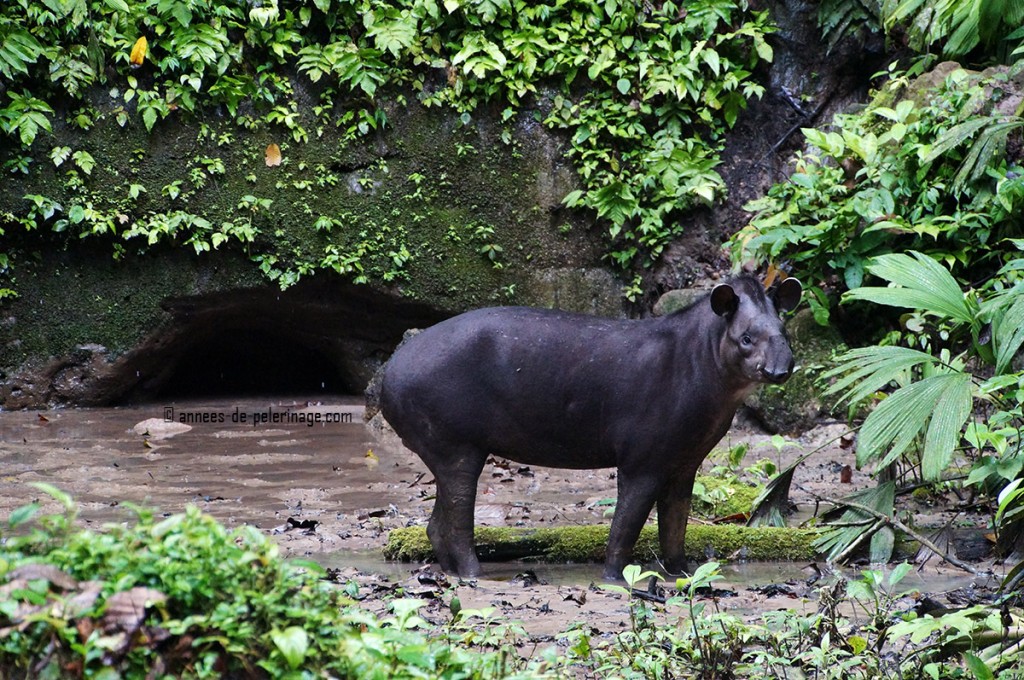 Weirdest of all, when some of the guides used his cell phone camera, which automatically turned into flash mode in the dark of the clearing, the tapir didn’t run. I am no expert on tapirs, but the guides later on agreed that it was desperately in need of water. That, along with its bad vision, was the only reason we could observe it for such a long time. 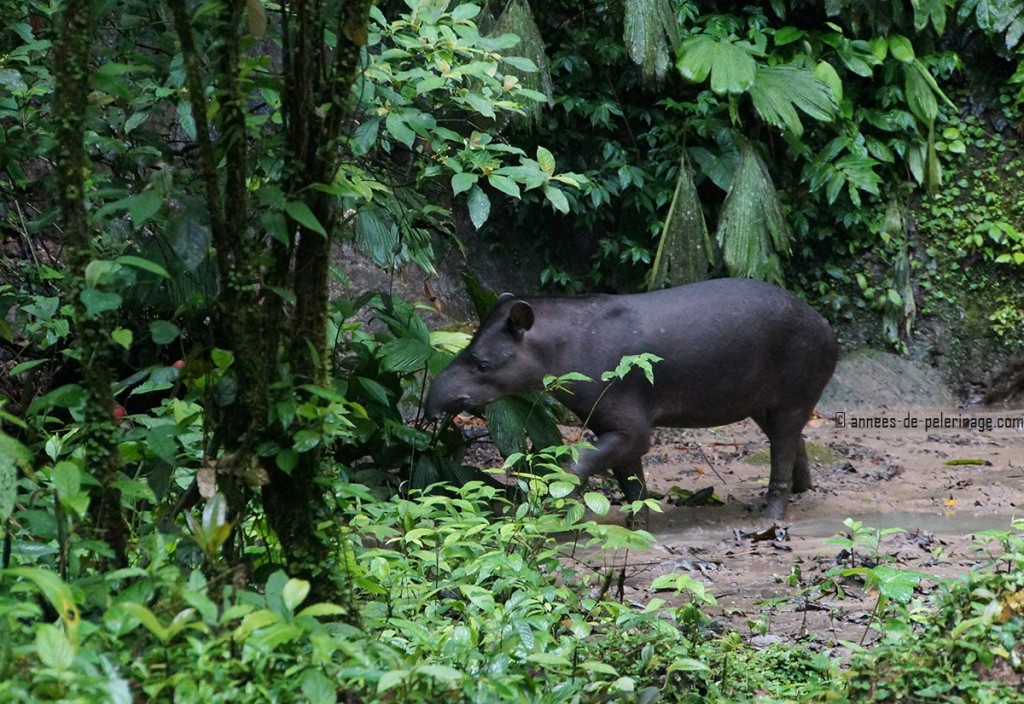 You can’t imagine the kind of happiness and elation that washed over us, after the tapir was gone for good. Scientists are usually forced to work with camera traps to observe them – and night vision camera traps at that. Luckily we had a lunch pack from our lodge along and we opened those to celebrate our once in a lifetime tapir sighting in what felt like a big communal feast (but was just a couple of sandwiches).

Here is the video of my tapir experience 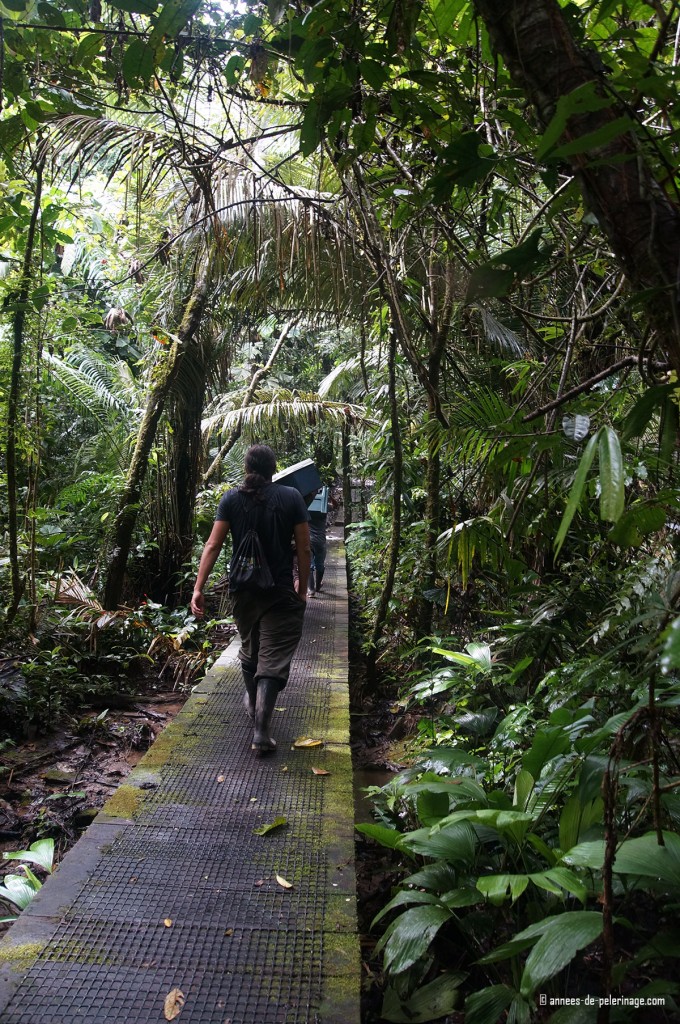 After that we packed our things and walked along the paved track of the Nappo Wildlife Center. It’s kind of strange how I came to see macaws and parakeets, and left without even looking sideways, not giving that missed experience a second thought. My mind was totally preoccupied with processing what it just witnessed.

I guess for you, as a reader, this report is kind of unfair. Maybe you came here searching for “how to see a tapir in Ecuador?”. To that question I cannot give you an answer. I saw it. But is it common to see a tapir in the Yasuni National Park Ecuador / Napo Wildlife Center? I should not think so – especially not in such an exposed way.

These majestic animals have been hunted over the past millennia (but more so in recent years) and have become quite shy. The current situation with big oil companies entering the area doesn’t make the habitat of the tapir any safer. I guess your best bet to see a tapir is in the very early morning hours or the later evening hours. But like I already detailed out – spotting anything in the Amazon rain forest solely depends on luck and the skill of your guides.

Have you ever seen a Tapir in the wild? Or any other rare big animal that left you feeling speechless? Let me know in the comments below. 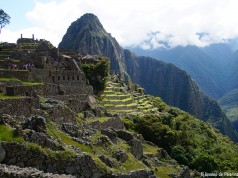 Machu Picchu altitude and how to prevent altitude sickness