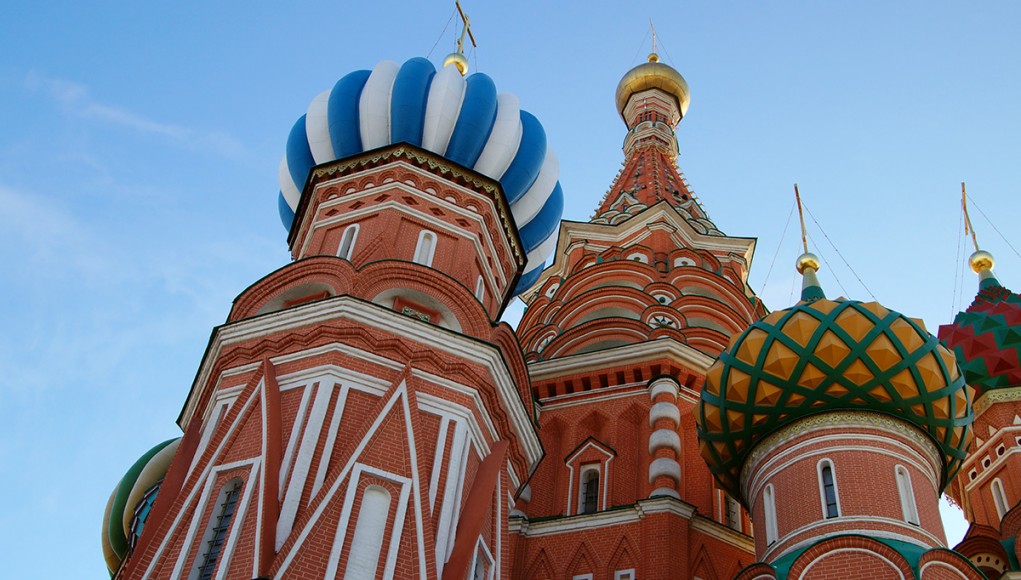 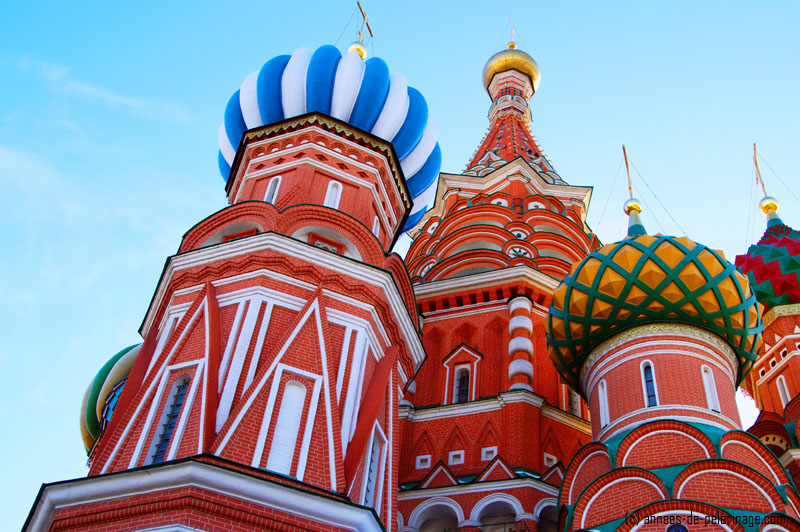 Russia has known 75 years of communism. From 1917 until 1992 the Stalinist regime systematically suppressed the religious views of the population. It’s rather ironic that the most readily recognized symbol of Mother Russia was and still is the St. Basil’s Cathedral in Moscow.

The ten iconic belfries mark the south end of the equally famous Red Square. Strangest of all: very few people know what hides within the building that has been often described as ‘a bonfire rising into the sky‘ even though it is an integral part of my list of the best things to do in Moscow.

So take my hand and let’s explore the interiors of the outstanding Cathedral, shall we?

History of the St. Basil’s Cathedral

Before I set out to visit St. Basil’s Cathedral, I did my homework. Wikipedia and an old hardcover travel guide from my grandpa revealed some fascinating facts. I’ll dispense with the details (and urge you to read them at your own leisure) and just mention a few highlights I feel like you might want to know.

The construction of St. Basil’s Cathedral started in 1552. Back then the infamous czar Ivan the Terrible commissioned the landmark to commemorate his various victories during the Russo-Kazan War. For each victory, he added one church.

This is one of the lesser known details about St. Basil’s Cathedral: Strictly speaking, it is not one big Cathedral but rather an agglomerate of 9 different chapels and one mausoleum! I didn’t know that before either. I just assumed there would be plenty of apses inside forming one big nave! But boy was I wrong! Instead, you’ll find 10 little altars like the one above – all in their own chapel.

Another misleading fact is the name itself. The Cathedral was originally known as Trinity Church, while the main sanctuary within is dedicated to the Intercession of Mary. However, the last addition of the church, the 10th chapel, is home to the grave of saint Vasily, who also goes by the name St. Basil.

The saint that died during the construction of the Church was very popular among the locals, and so the sacred complex as a whole became known as St. Basil’s Cathedral ever since. In truth, however, the tomb of St. Basil is just one of the minor chapels and no cathedral at all. 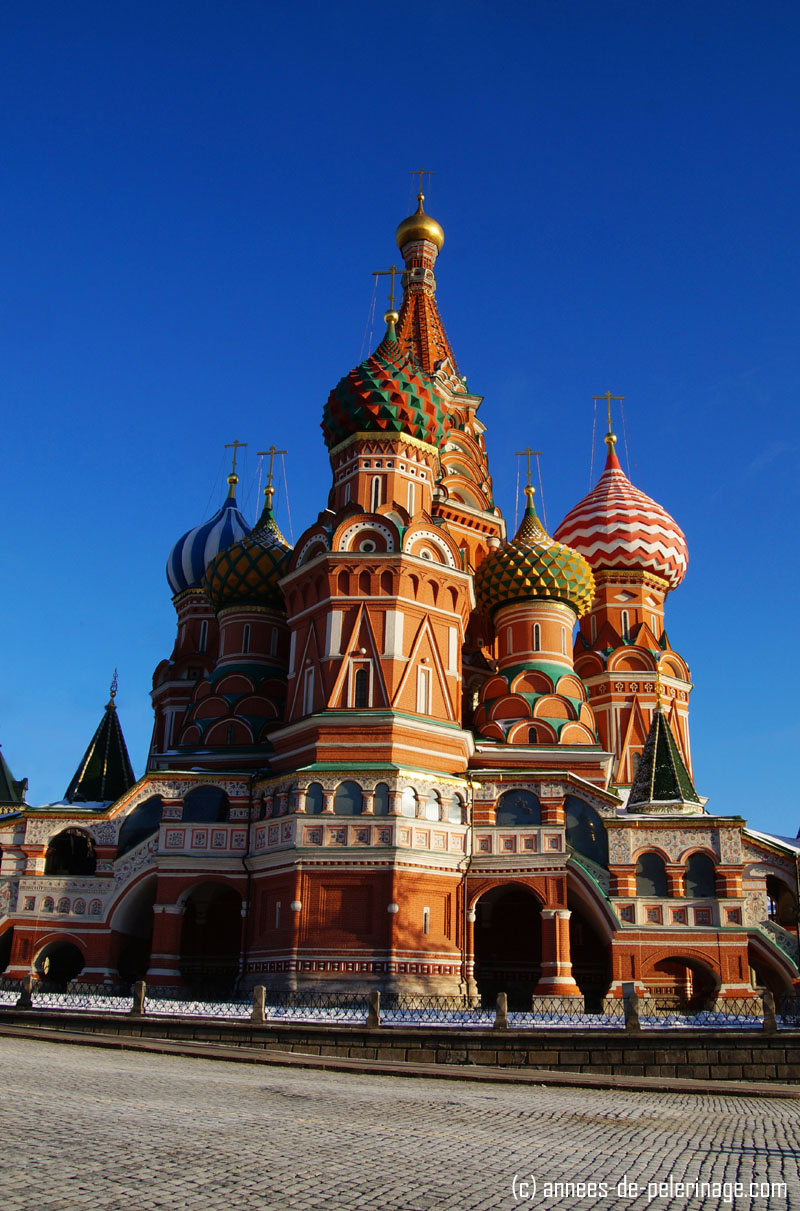 St. Basil’s Cathedral stands freely on the south end of the Red Square. So it really doesn’t matter from which direction you approach. In fact, I recommend you to take your time and walk around the whole building once. Know that the UNESCO World Heritage Site is most beautiful from outside. Passing by St. Basil’s Cathedral the Red Square leads down to the Moskva river on a gentle slope. This will give you a spectacular view of the colorful building – totally unobstructed by the ubiquitous touristic hordes!

Now I want to throw one last bit of history at you. Like I already laid out St. Basil’s Church was built to celebrate the victory over the Khanate of Kazan. So essentially the building is said to reflect the then conceived dominance of Christianity over the Muslims. Today you will find many other Orthodox churches that look like St. Basil’s Cathedral (e.g. the Church of the Savior on Spilled Blood in St. Petersburg).

But back at the end of the 16th century, the building was without precedent. It is believed that St. Basil’s Church quotes elements from the Qolşärif Mosque in Kazan that was destroyed during Ivan the Terrible’s conquest. While this theory certainly remains highly debated among scholars, I found the analogy fitting. Looking at the intricate woodwork of the onion-shaped spires I cannot help but think of a tile covered mosques with its minarets reaching to the sky. At any rate, there are old records indicating that German and Italian craftsmen helped to erect the church, adding even more elements to the stylist diversity. 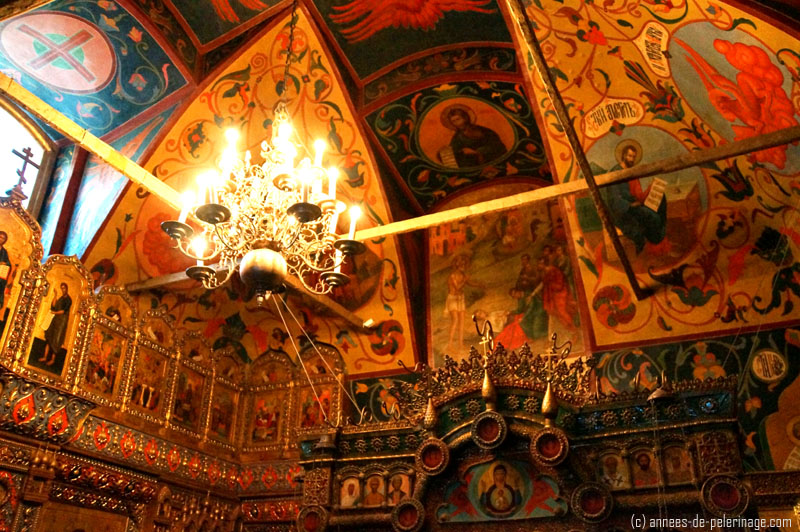 Once you are finished taking pictures outside, I’d urge you to go to the main entrance. You will reach it going through a door on the side facing Red Square. Now I visited Moscow in winter and had absolutely no problem with buying the tickets nor with getting in. There was literally no queue at all. I heard that during summer it will be quite hard to get in. So best be there as early as possible.

The insides of the Cathedral form a harsh contrast to the cosmopolitan facade. Within you will be able to explore a very narrow labyrinth of corridors and tiny oratories. Each spire you see from the outside belongs to its own church. These small chapels consist of little more than the foundation of the spire and a door. It is very, very cramped!

I honestly couldn’t believe how winded it all was. The walls are, however, meticulously painted with intricate floral designs and Christian motifs. Personally speaking, I really didn’t like the decoration all too much. The self-imposed stylistic limitations of Russian iconostases are beyond me. But that might just be me.

It’s fun, however, to explore the inner maze of St. Basil’s church, for it is a maze in truth! You might actually get lost (I at least did!). Also take the time, as you will involuntarily do anyway, to frequently take a glance at the splendor above. The tiny chapels, some of them barely spanning 10 square meters, don’t have a true apse. It is the hollow spires themselves that serve in this function. Some of the spectacular murals will give you the uncanny impression that the depicted saints are truly watching over you from above.

There are small signs all around the Cathedral tracing out a tour for you. Just follow these, and you will eventually find your way to the outside again. The exit will be through the door under the square green steeple at the front, which probably used to be the Main entrance once.

The Cathedral opens at 10 am and closes at 5 pm. Be aware that St. Basil will be closed the first Wednesday of any given month. Other than the St. Basil’s Cathedral is open seven days a week 365 days a year. It is important to understand that it is not an active church anymore. It has been forcefully secularized by the Soviets in 1928 and then turned into a museum. Tickets will be 350 Rubel for an adult.

Is St. Basil’s Church worth visiting?

Okay here is the deal: Visiting Moscow there is no way around St. Basil’s Cathedral – none whatsoever. It is a UNESCO World Heritage Site for a reason. I’ll even go as far as saying that nobody can claim to have seen Moscow without having seen St. Basil’s Cathedral. But, and here comes the big but, the outstanding building only gets an average score for its interiors.

There are so many churches, cathedrals, monasteries, and convents in Russia. In fact, just a couple of hundred meters away the Kremlin is home to a handful of them. In my humble opinion, there are more impressive sights in Moscow than the cramped corridors of St. Basil’s Cathedral (check out this guide on the most important attractions in Moscow).

Calculate roughly 30-60 minutes to tour the insides of St. Basil’s Cathedral. If there is no queue outside and you aren’t on a tight schedule, there is probably no need to skip this museum. I found the interior of the Churches within the grounds of the Kremlin to be more impressive though and would exclusively stick to these on my next visit.

What are your thoughts? Would you go inside St. Basil’s Cathedral in Moscow?