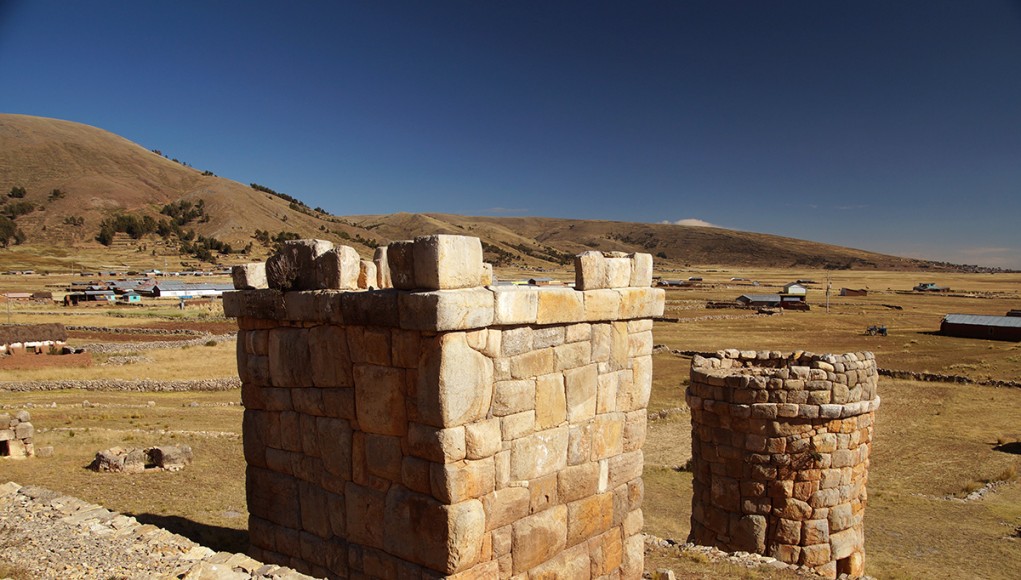 The ancient funerary towers of the Aymara people are scattered around the area of Puno. Almost unknown, the Chullpas impress with their monumental beauty. 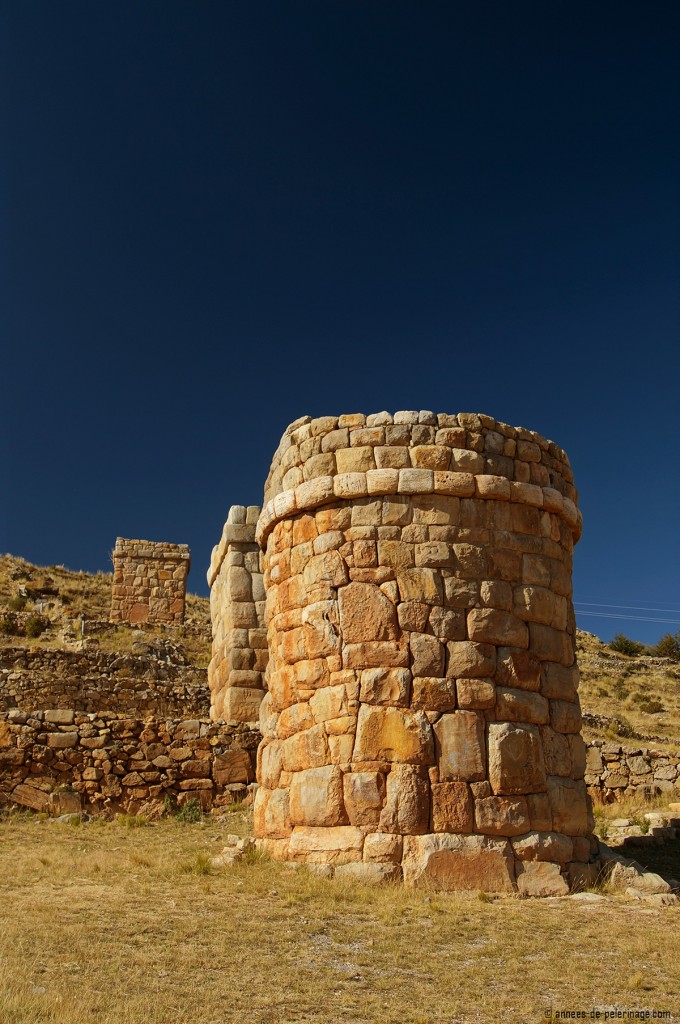 Scattered around the Altiplano between Bolivia and Peru insiders will be able to point out gigantic burial towers – ancient monuments to a culture almost forgotten. Archaeologists call them Chullpas or sometimes Chullpares and connect them with the Aymara people. They come in different sizes and shapes. Some are square, others round, some of them are little more than tiny urns of crumbling adobe, while others are built from perfectly cut stones. The tallest of them reach an impressive 12 meters into the sky. But can you imagine: even these spectacular funerary towers see almost no tourists. Now feel lucky I took some chullpa photos for you! 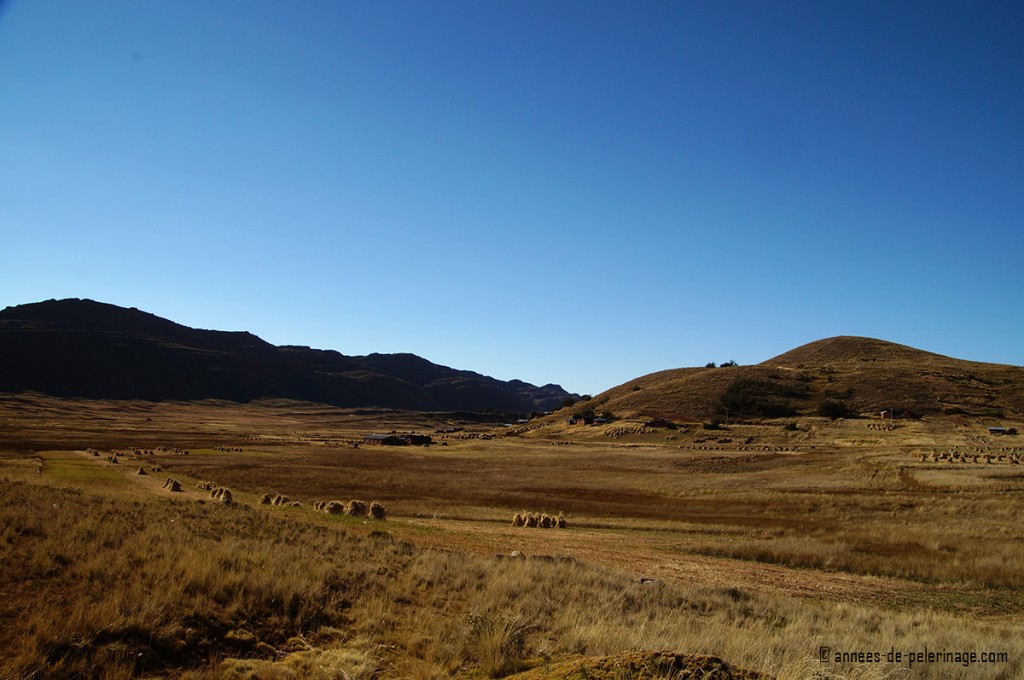 I have to admit that I came somewhat unprepared to Lake Titicaca. It was my guide who suggested visiting the Chullpas. From past experiences, I learned to trust him in such matters. After all, it was him suggesting the ancient stone gate of Amaru Muru just the day before and I will, in all honesty, remember the beauty of that place for the rest of my life (read the story here).

Chullpas can be found in the area of Puno, but like everything around Lake Titicaca, getting to the Chullpas isn’t easy. Or let’s put it differently – the approach is straight forward, but the roads around the highest commercially shippable lake are not meant for fast driving. Technically the place was just some 20 kilometres away from my hotel. Getting there nevertheless took almost three-quarters of an hour. 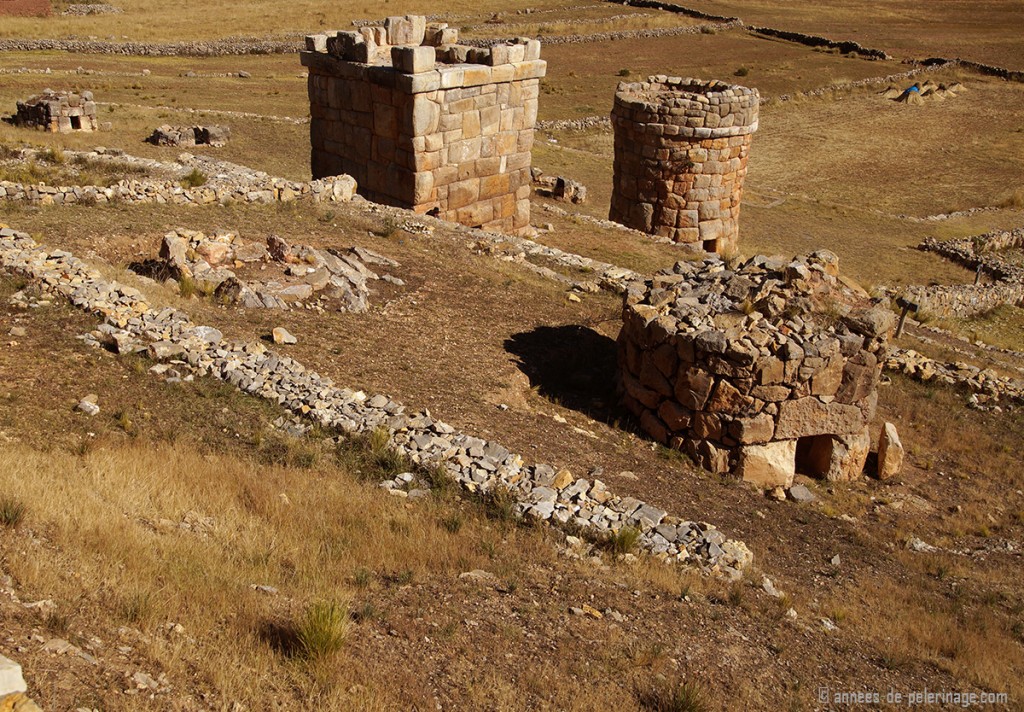 The trip was well worth it. At one point on the simple dirt road, we turned left and there they were. Sitting atop the hill overlooking a small village stood three impressive towers, with more crumbling ruins to the sides. The stark contrast of their warm colours against the perfectly blue sky created an image to wet one’s eyes. I had my camera out to take photos of the chullpas before my feet actually left the car!

Architecture of the Chullpas 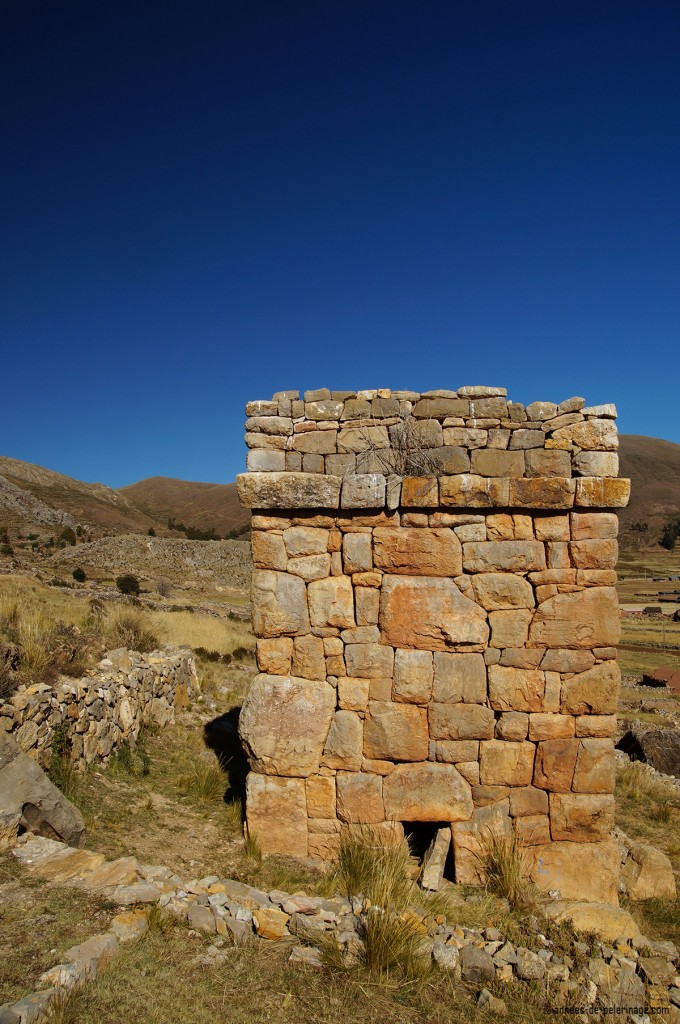 The first thing I noticed was, of course, the perfect masonry of the Chullpas. Each stone fit seamlessly into the next, reminding me of the Inca ruins I saw in the rest of Peru (check out my guide on the amazing water gardens of the Incas to see what I am talking about). Yet these funerary towers were older than everything the Inca ever built. 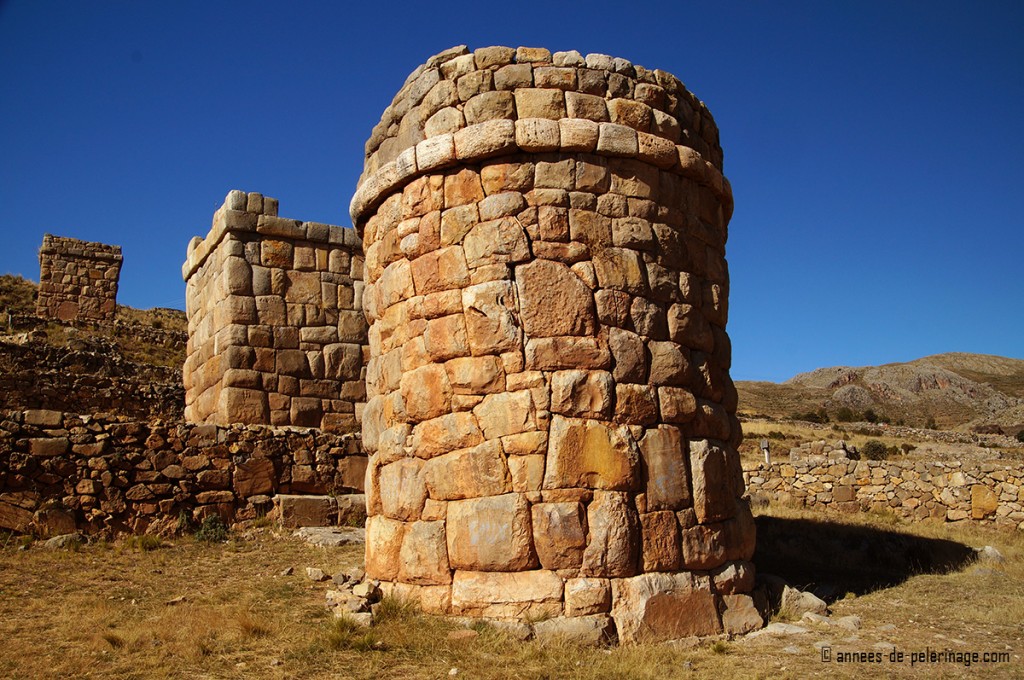 Some of the towers were square, others rounds. My guide informed me that the round Chullpas were younger than the others. Radiocarbon analysis allowed to glean this information from the bodies found within. None of them remain – archaeologists secured the precious mummies long ago, while others fell victim to tomb raiders. 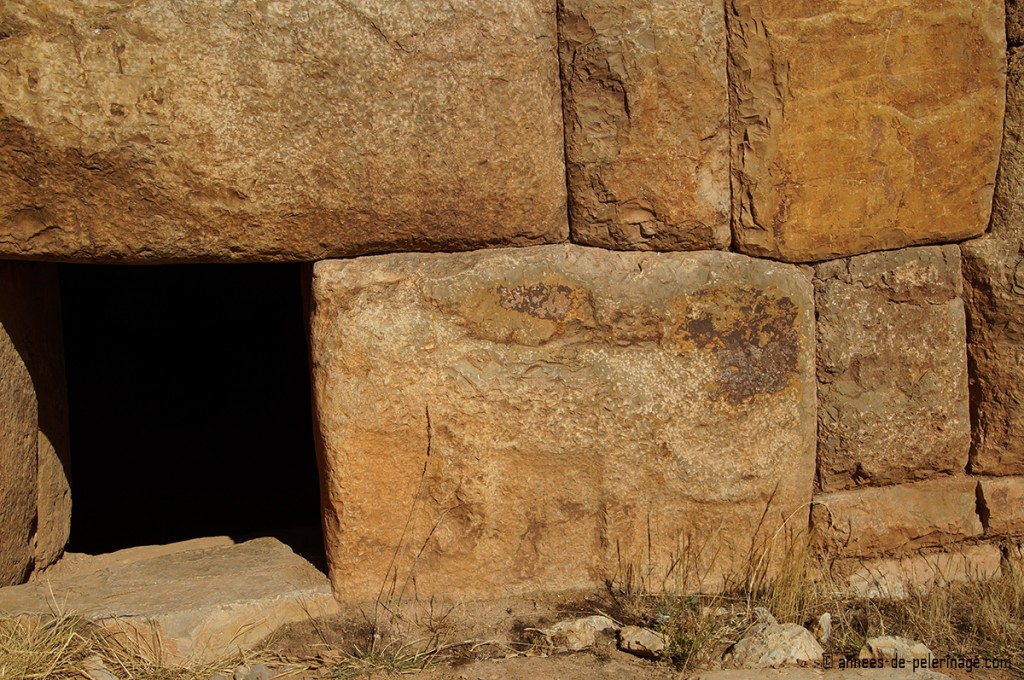 Of course, I couldn’t resist going inside. Once huge stone slabs must have protected the entrance to the Chullpas. These days the only barrier almost preventing me from inspecting the burial chamber was the sheer size of the entrance. I had to literally snake myself through the small opening. Still, the layout of the entrance suggests that the Chullpas were designed to be opened. Adding new bodies could have been one such purpose, and of perhaps for special celebrations centred on the mummies. It could also explain why all entrances face to the east, where the sun is, so mythology has it, reborn by mother Earth each day. 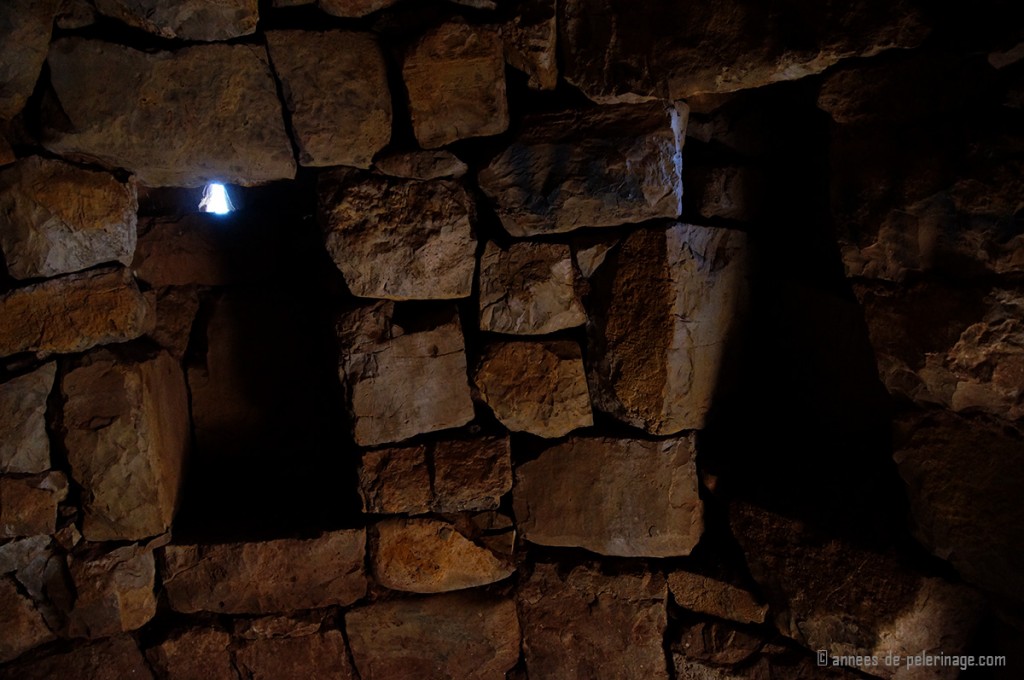 The picture above attests, that getting inside is possible. Within, I found a dome-shaped chamber (while the outside was square) and a couple of niches. All of them empty now, but I assume these must have held ritual objects or mummies sitting away eternity in their fetal crouches. 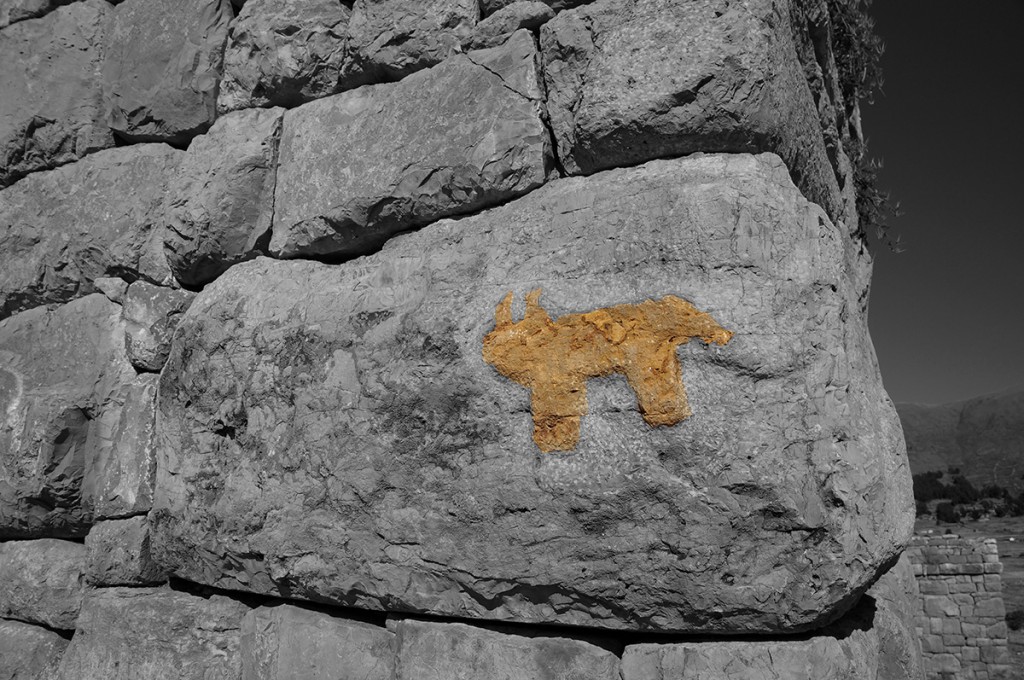 Had I came without a guide or unprepared I would never have noticed the many details adorning the Chullpas (this is a good opportunity to thank the crew of the outstanding Titilaka luxury Lodge!!). Almost faded after hundreds of years facing the harsh climate on the Altiplano, depictions of mythological animals around the Andes can be identified on the outer walls of the burial towers. I found a couple of lamas, a puma and a snake; though I am sure a condor must be around as well. As for the purpose of the reliefs, I am quite undecided: They have the feeling of graffiti, as their execution is quite crude.

In contrast to this observation Spanish Conquistador Cieza de Leon once wrote in his journal, that the Andean people “put more effort into building the Chullpas then they put in building their own houses”.

History of the Chullpas 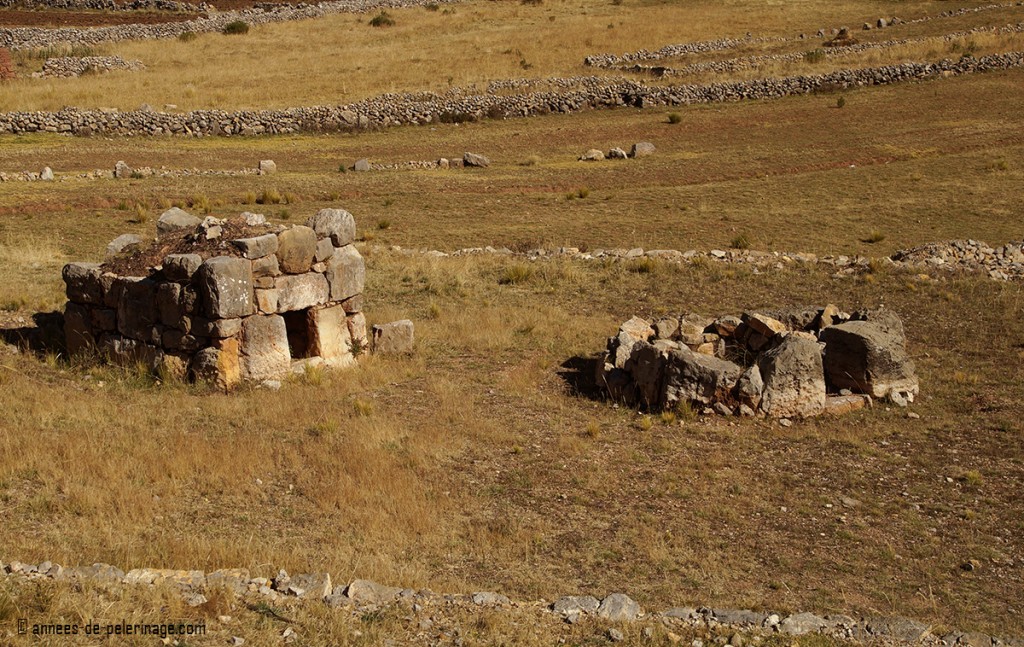 I guess this would be a good time to lose a few words about the history of the Chullpas: Tower sepulchre are nothing new in South America. In fact, most prehistoric and historic cultures built them at one point in their history. The first towers can be dated back to 200 BC, but the practice only becomes widespread in the Andes in the so-called Late Intermediate period between 1000 AD and 1476, when the Spaniards invaded the Inca kingdom. The area around Puno had been settled by a people called Colla, predecessors of the Aymara people. Later they got subjected by the Inca, who actually place their very origins in this region around Lake Titicaca (there are quite some hints that Inca nobility was actually Aymara). The Aymara retained some independence during the reign of the Incas and continued to build more Chullpas.

Their heyday was probably after the decline of the Tiahuanaco culture. Some archaeologist argued that following their demise they still served as a way to legitimize the new rulers. Most of the Chullpas around Lake Titicaca appear to have been built in between the 14th and the 15th century. 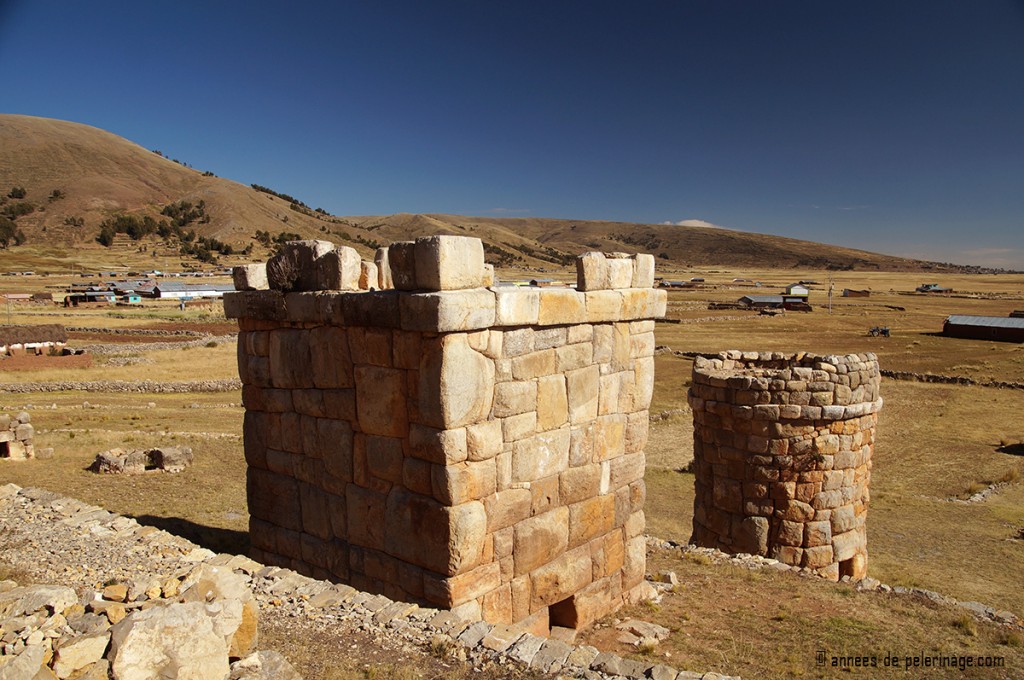 Interestingly enough most Chullpas can be found very close to important communities. Since they are always situated on elevated grounds, theories have been around that they served landmarking functions as well. Most Chullpas housed more than one body and DNA analysis showed that at least the males always were related. The Aymara themselves call them uta Amaya – houses of the soul. 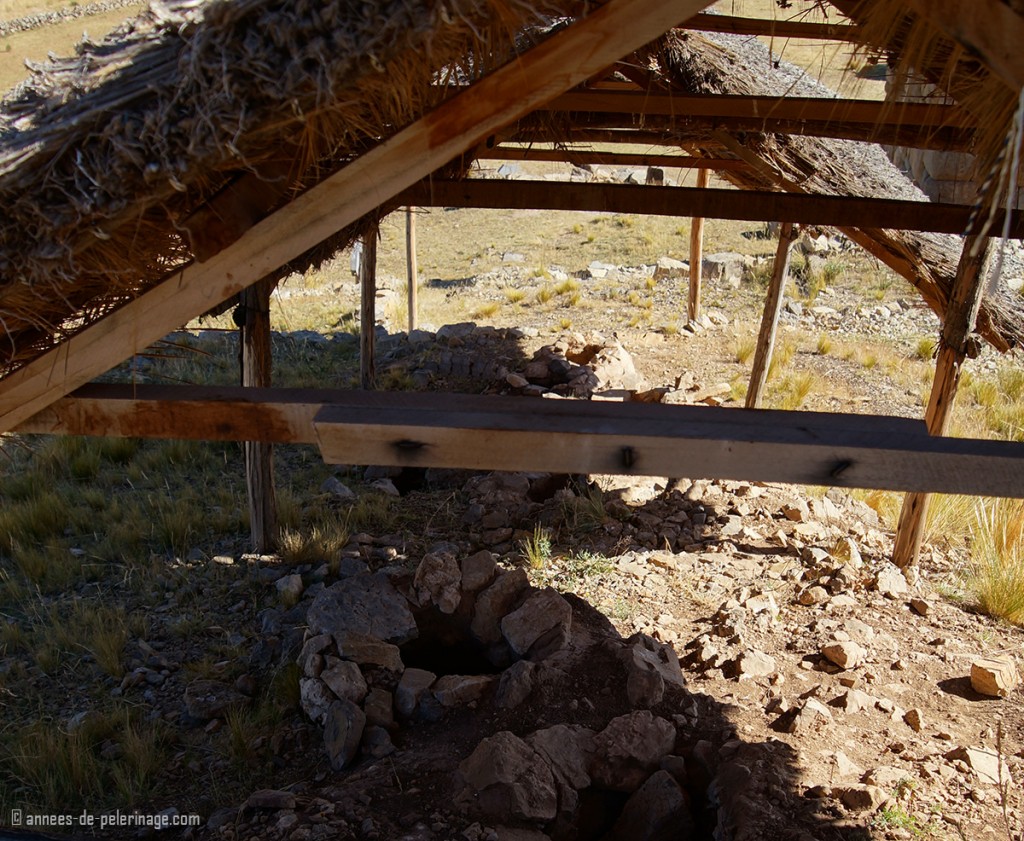 Close to the Chullpas, I visited, smaller burial chambers were visible. Now protected by a roof from further decay, they clearly must have been built at a late time. They do, however, support the theory that the Chullpas were more than just normal graves. They were epitaphs to the ongoing power of a clan, legitimated their claim on the territory and served as a site of ancestral worship.

Where to find & take photos of the Chullpas 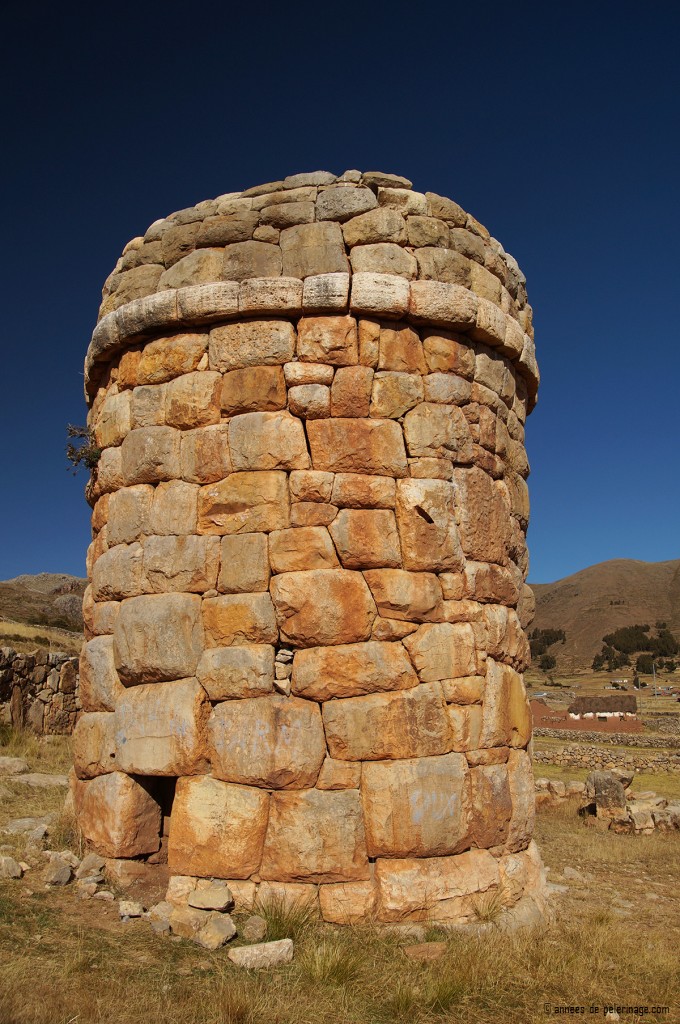 The ones I visited were located in a small community near Ilave District. But I guess the tombs at Sillustani are most famous, for no reason, I can actually say. Personally, I couldn’t find a map of all the Chullpas in the area of Puno, just this research paper. Sadly with no detailed locations attached. That being said local guides will know the most important grave sites and will be able to point them out. I think it would do the whole region good to actually develop these archaeological sites beyond the chullpas of Sillustani. After all the Aymara still settle the land and it is part of their history. Beyond that, they are just beautiful and somewhat mystical and just the thing what tourists are looking for. They do make for a wonderful price in your family photo album, eh? For me they certainly they proof that there are more things to do around Lake Titicaca than visiting the spectacular floating reed islands of the Uros people, even though I did that as well.

How do you feel about the Chullpas? Would you visit them while staying in Puno/Lake Titicaca? 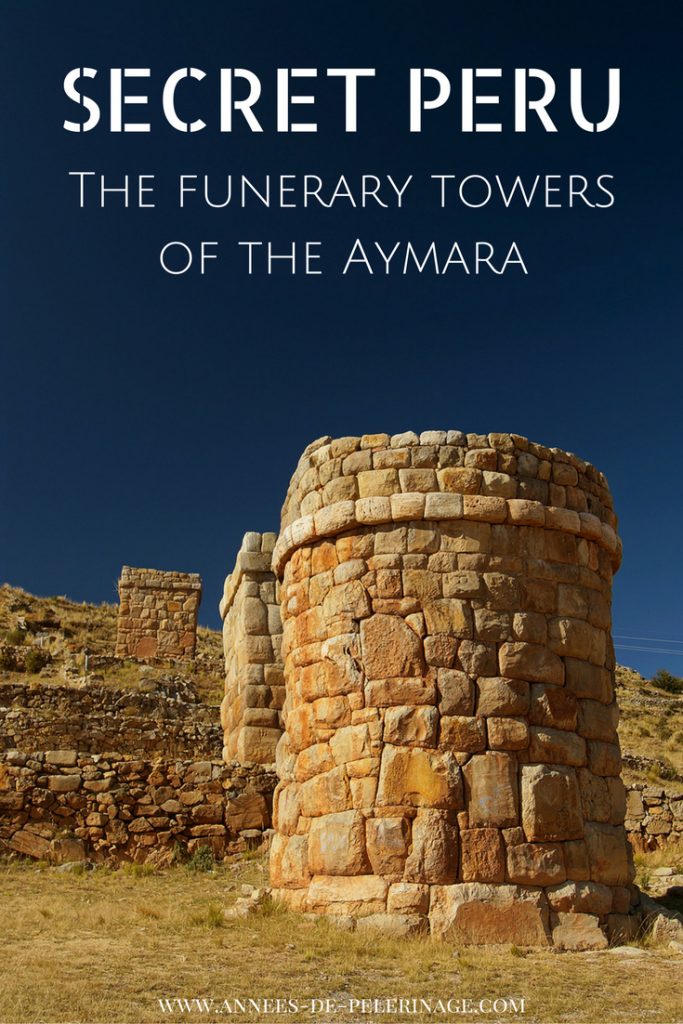