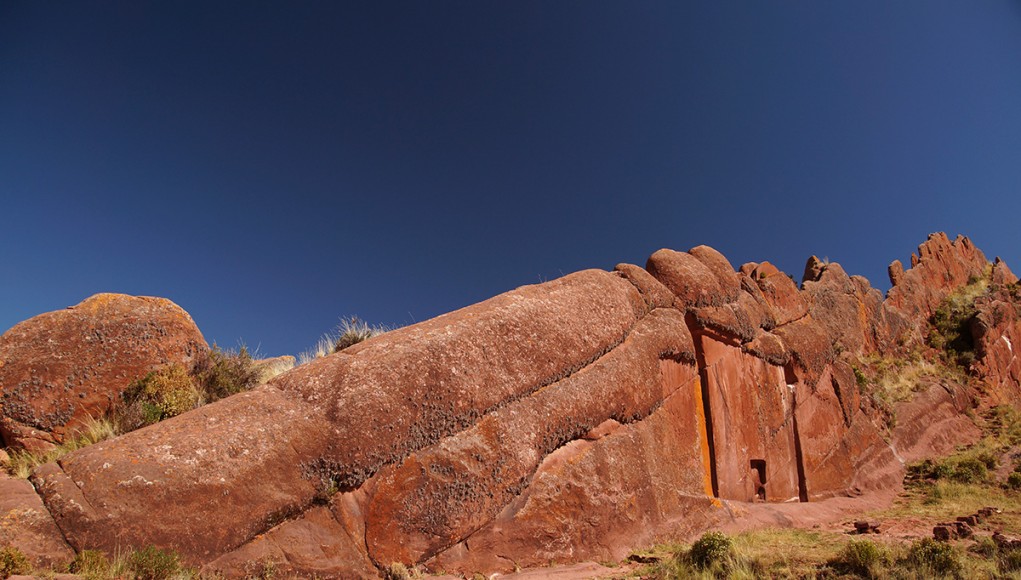 Breathtaking pictures and a detailed history of the pre-Inca site of Amaru Muru in the Hayu Marca mountains near Lake Titicaca. 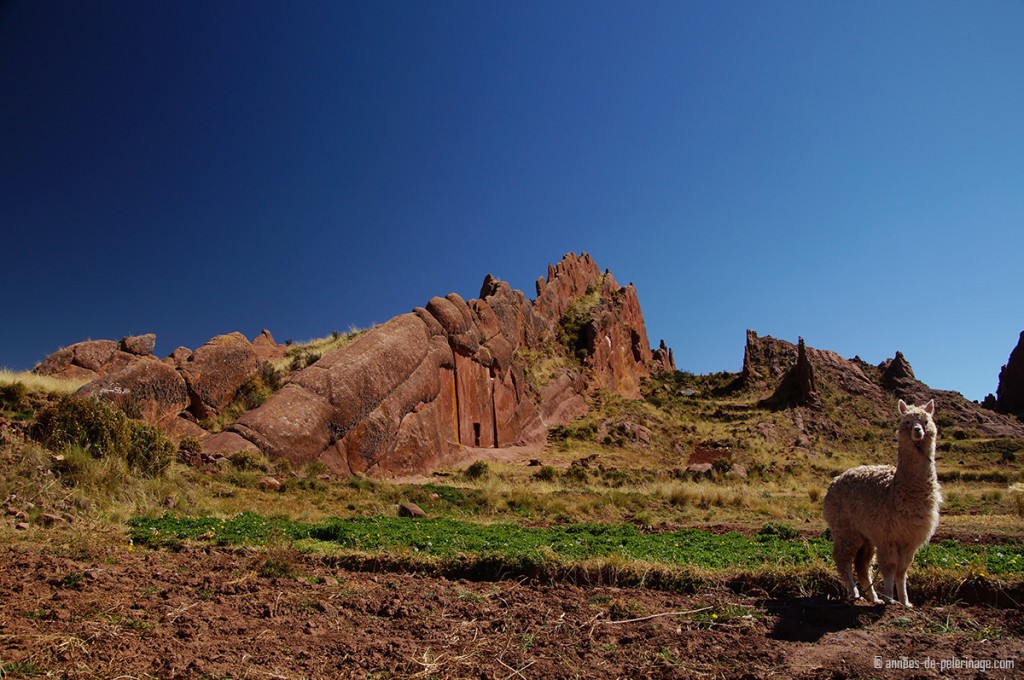 Hayu Marca is a majestic, yet rugged mountain range along the shores of Lake Titicaca. Accidently discovered in 1996 a gigantic doorway hides within the deep crevices of the stunning red rocks. Among the locals this virtually unknown Inca site is referred to as Amaru Muru – the original name all but lost in history. Which is why you will find many people actually calling this Aramu Muru – quite confusing if you ask me

To be quite frank with you, Amaru Maru hasn’t been on my itinerary for Peru. I’ve never heard of it before and it was through sheer luck and special circumstances that I ended up there. Originally I wanted to see Tihuanaco. On the map, the UNESCO World Heritage site was only a hundred miles across the border (I stayed at a more than beautiful luxury hotel called Titilaka near Puno; read my review here). But as it turned out the ongoing conflict between Peru and Bolivia made a simple road trip quite the financially exhausting endeavour. The two travel agencies I asked both quoted 500 USD per person, and all taxi drivers explained to me how they couldn’t cross the border. Faced with these inconveniences I turned to my local guide for alternatives. He was the one who came up with Aramu Muru.

A spiritual doorway, he said, could be seen a few Kilometres into the countryside hidden deep inside Hayu Marca. It would be a massive understatement to say I was very sceptical at first. Amaru Muru had the ring of some weird pseudo-buddist worship site for gentrified hipsters. But oh Lord was I wrong. 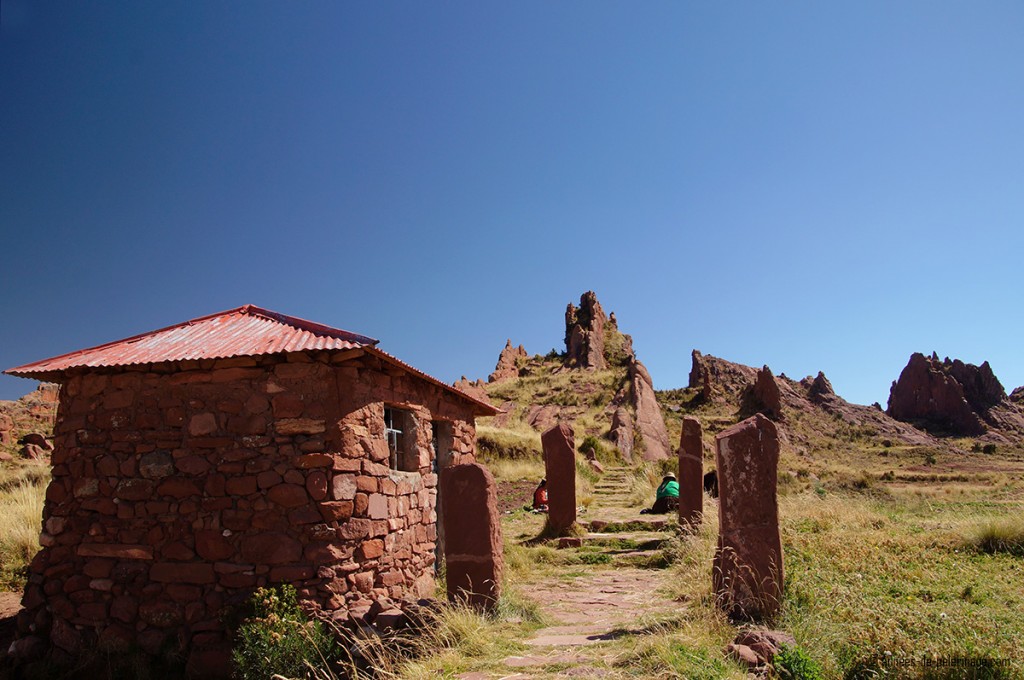 When our jeep finally stopped after a one hour’s drive over the bumpy road I already felt my camera itching to be taken out. To the right, the grand vista of the Hayu Marca expanded and formed the perfect contrast on the utterly blue sky.

Despite the overwhelming beauty, no tourist infrastructure exists around Amaru Muru. We basically dropped out right in front of it, with only a short pathway of perhaps 100 meters to our final destination. 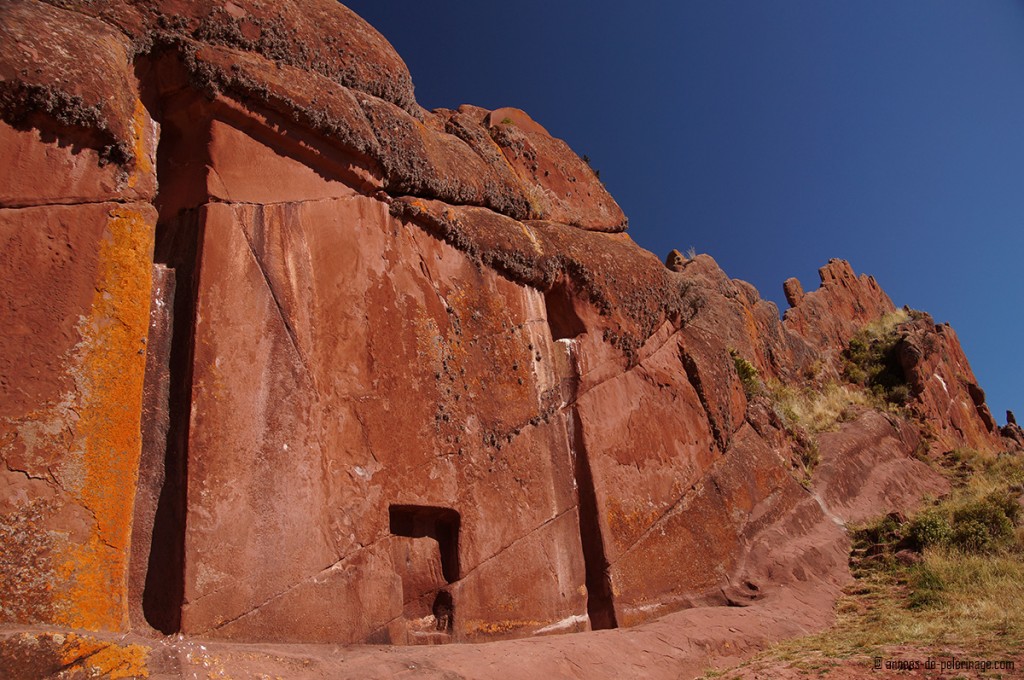 But let me explain the site a bit for you: Amaru Muru is roughly 7 meters high and again as many meters wide. Giant funnels frame the doorway to each site, while the actual door is large enough to fit an average sized man. A small circular recess is visible about the height of your belly button, while others seem to be made to fit your hands.

To this date, the real purpose of Amaru Muru remains utterly unknown. No written records of any kind exist – a common problem with all things related to the Inca culture and its predecessors. In fact, it is doubtful that the Incas carved it out of the rock, to begin with, though they probably made use of it in one way or another. Most likely it has been here long before. Other stone gates can be found around Lake Titicaca which dates back to around 1200 AC.

We will, however, never know, since no organic materials were found near the gate. So there really is nothing for archaeologist as a basis for proper age dating. And thus in recent years speculations and theories arose aplenty. In fact, local shamans use it, once again, for ceremonies of their own design. 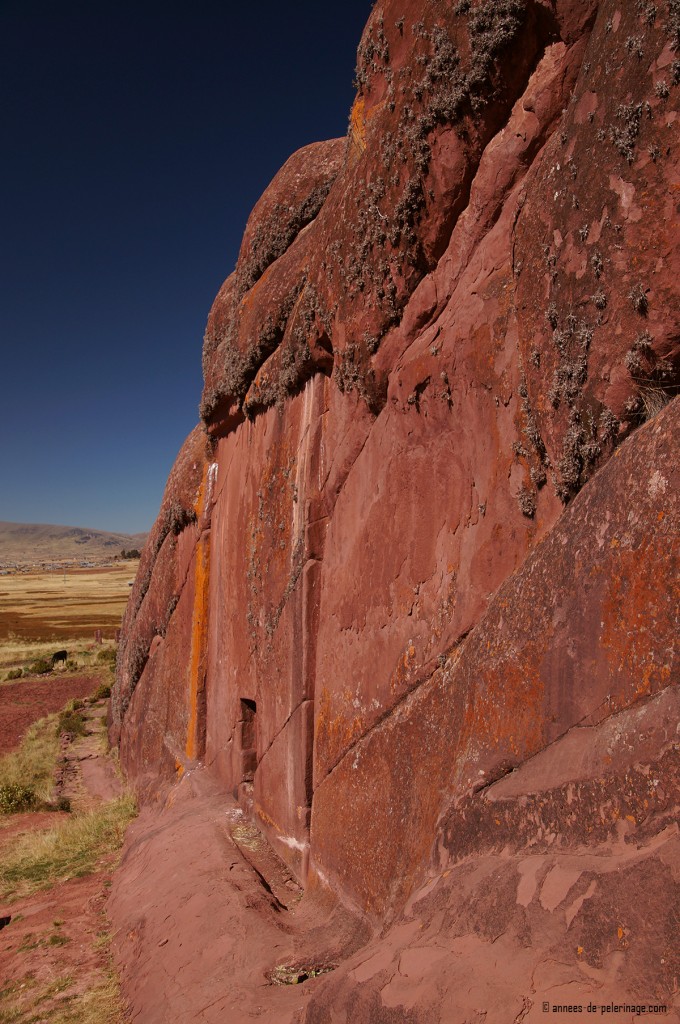 A doorway to another world. The entrance to a golden underworld. A stargate for aliens – around the internet you will find the wildest theories. And as I am not prone to speculation I will merely relate the origin of the name of Aramu Muru.

Amaru Muru was the name of a very important priest from the so-called Seven Rays Monastery. According to legend, he was fleeing the Spanish conquistadores trying to hide the Golden Sun Disk – the most important Inca artefact of all. Legend has it he escaped with the priceless treasure to the Hayu Marca mountains and vanished through this gate along the shores of Lake Titicaca into another world. He has never seen again.

Thus the site came to its current name: Amaru Muru, like that fleeing priest. To me, it all sounds a bit too convenient. Lake Titicaca was, you have to know, the mystical birthplace of the Inca Empire. Where else, but here, should it end – or rather not end. Reality probably was a lot more gruesome, even though it remains a fact that the Golden Sun Disk has never been found.

The stone arch at Amaru Muru 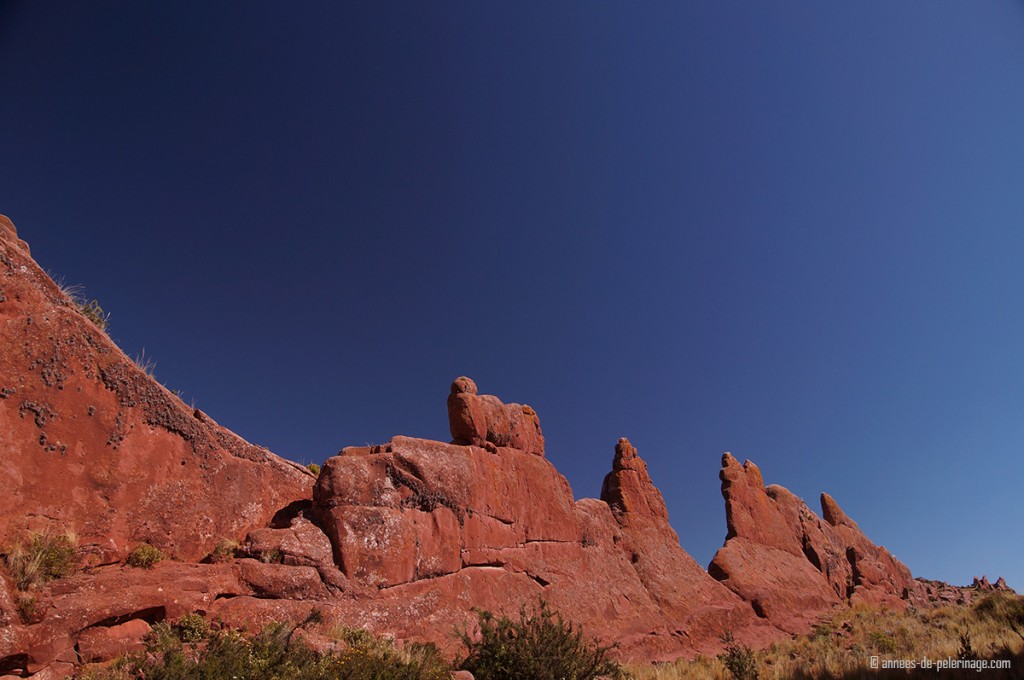 Instead of speculations I rather want to focus on the visible facts: For me, Amaru Muru is not a spiritual or mythical site. These days we are building hotels into cliff sites, so obviously there are many reasons to have stones hewn and dressed. What remains no doubt, however,  that the actual site of Amaru Muru is beyond breath-taking. 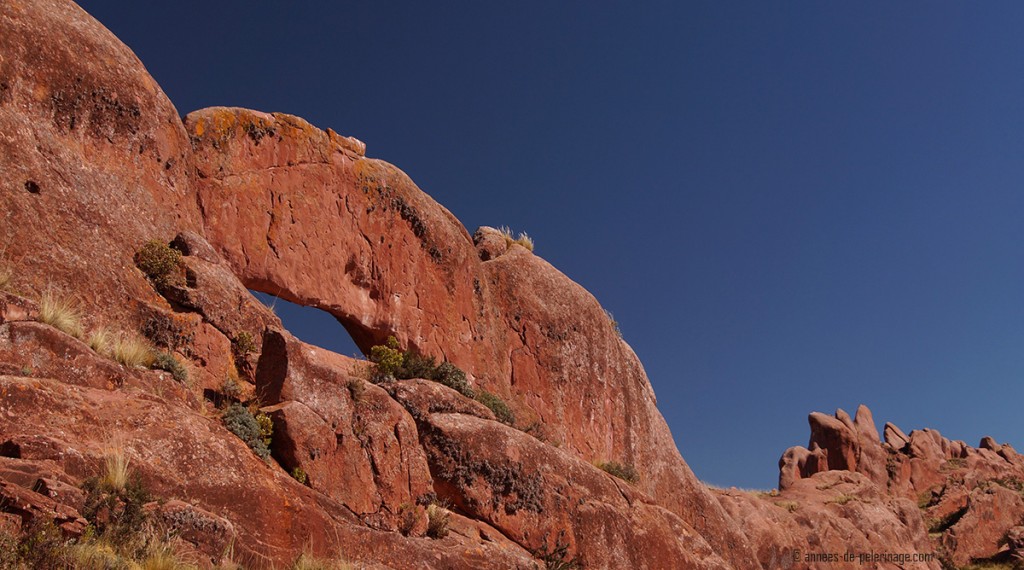 I strongly urge to walk a little further up the hill and into the mountains. There is a hardly a day I open Pinterest or Instagram without seeing one of the ubiquitous pictures of Arches National Park in the US. And truth be told, even after all those pictures it’s still worth seeing. But so is Amaru Muru! Just like in Utah you will find an impressive natural rock arch just behind the alleged doorway into another world. 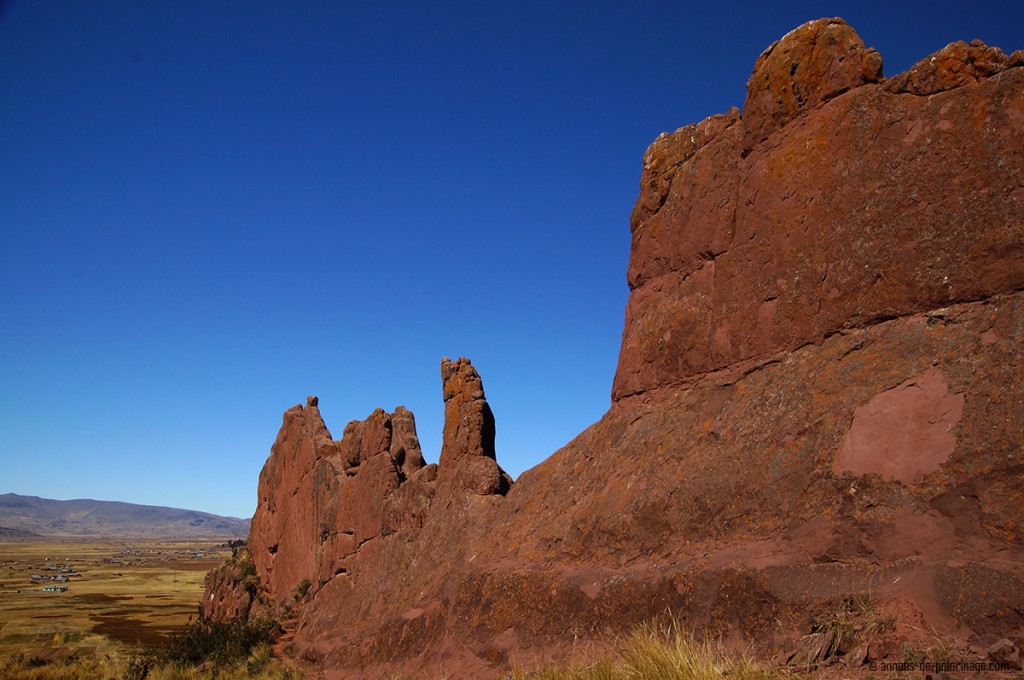 When I saw it, my guide literally heard my jaw drop! I really couldn’t figure out why I was the only tourist here. If this was Germany and not Peru, there probably would be thousands of tourists around me. In a way, I was thankful to be alone here. That, and not weird speculations made my few hours at Amaru Muru quite the spiritual experience. It’s one of the few places on earth where you can almost feel and touch geology at work. Glaciers, torrential rains, harsh winters and hot summers, the unceasing movement of mother earth and all that is below us – it can be seen and felt here. 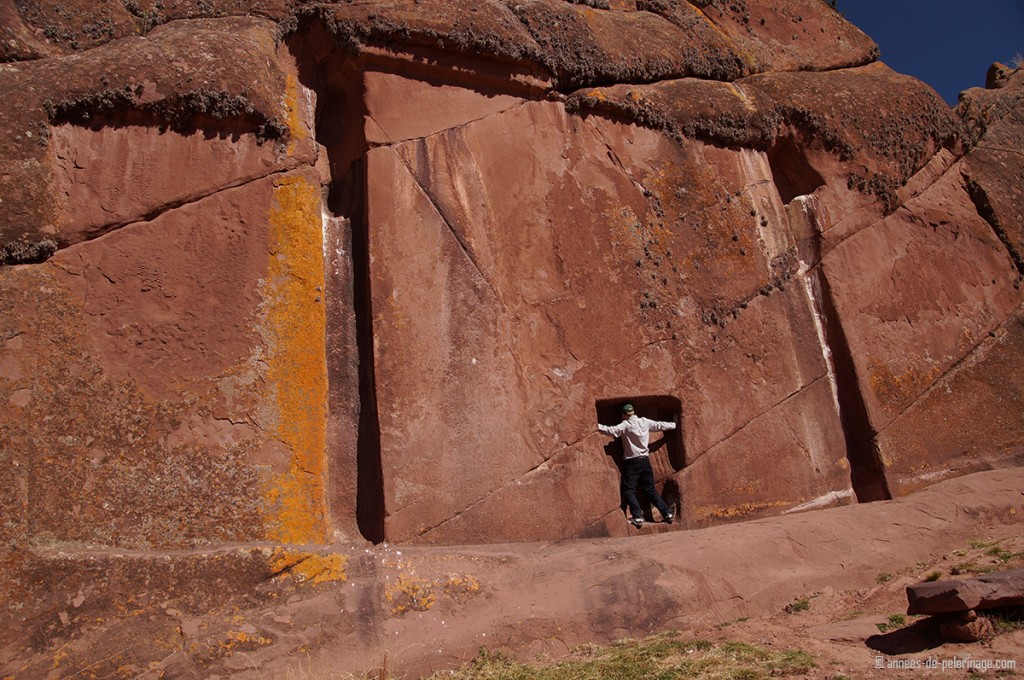 The locals, of course, believe that, if one stands inside the gate of Amaru Muru, places both palms into the door frame, and presses the belly button into the circular recess, contact to the another world is made. Strange visions will occur, otherworldly sound can be heard and for a lucky few the gate will open. I tried and can only report: It was quite uncomfortable. So I can only point out a special treat for you: A colony of black Ibis has taken residency in the rock formations around Aramu Muru. They will only stay here for the night, so it’s probably best to visit in the evening if you want to share their rather noisy company. During the day you will only see their droppings!

Have you heard of Aramu Muru/Amaru Muru before? Or did you, much like myself, accidently discover mind-blowing beauty among your travels? Let me know in the comments below.