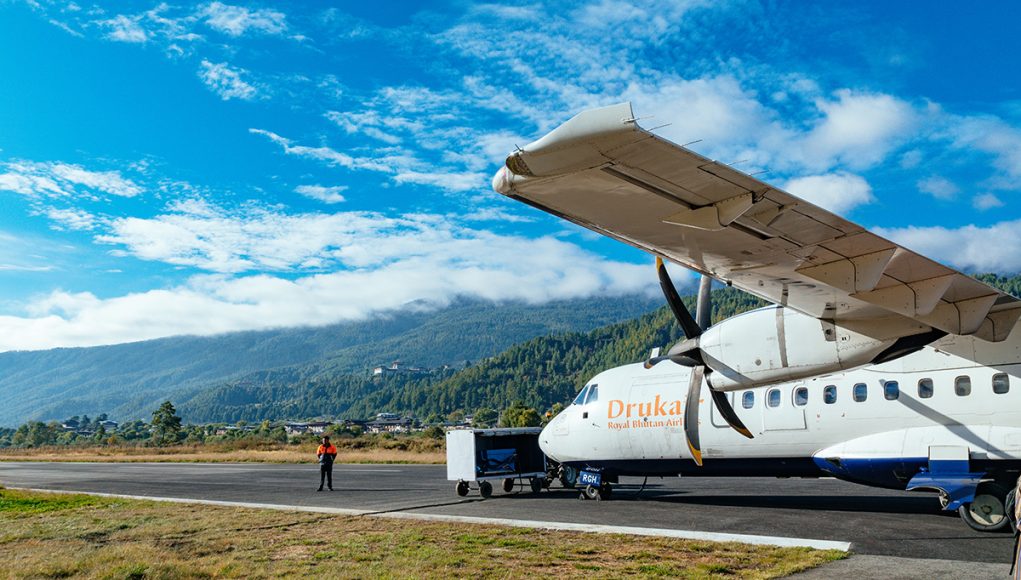 Bhutan is a mystical country full of natural beauty. Quite through a miracle the country still retains most of its original Buddhist culture and tradition. But there is a reason why the British never were able to incorporate it into their Empire and thus India: It is just so damn hard to get to Bhutan.

On the Northern side, the Himalaya forms a natural barrier of 20.000 feet and higher, while everything else is nothing else but incredibly steep valleys fully covered by a dense rain forest. Even today, only three roads lead into the Land of the Thunder Dragon. So, how to get to Bhutan then?

Before my recent trip, I researched extensively about the different options. Sadly there is not all that much detailed information around, which is why I wrote this little travel guide (I also wrote a guide about the 20 tourist attractions in Bhutan, which you will find here). What worked for me, might not work for you (really depends on the flight schedule and where you come from), but I hope all the information I gathered here will enable you to come to your own conclusion.

Also, make sure to read my guide on the best time to visit Bhutan, as I will not cover this topic in this guide.

How to get to Bhutan – the basics

Well, there are three standard ways for tourists to enter the country and I will take a detailed look at the different options. Residents of a SAARC country got a couple of different choices. As currently most of my readers come from the USA and Western Europe, I will not mention it.

All other tourists can decide to take a plane from Delhi, Kathmandu or Bangkok to Paro international Airport in Bhutan. As that airport is probably the most difficult and dangerous airport in the world, only the national carrier is allowed to land. All tourists will need a visa.

I’ll talk about the pros and cons of the different approaches in detail below. Your main takeaway, for now, should be: Except you are living in those cities, there are no direct commercial flights to Bhutan. There are also infrequent flights from Bangladesh and Singapore.

I would talk things over with your tour agency – sometimes they can get you a nice deal. I booked my flights with Aman (the most luxurious way to travel Bhutan). You can read my review of their lodges here.

General information about getting to Bhutan by flight

There is one important thing you should know in advance: Flights into Paro airport are only possible with good weather. Pilots use Visual Flight Rules, as autopilot is not available. This basically means flights are often delayed (or even canceled) when the weather is bad. For the very same reason, night flights are not possible either.

Paro airport is surrounded by high mountains on all sides and the pilot basically has to fly in a wiggly line. The landing strip is not visible to him until the very last moment. It’s quite scary, as it sometimes feels the wings of the aircraft would almost touch the mountain.

Currently, only five pilots in the world are allowed to land in Paro. As a result, you can either fly with DrukAir or Bhutan Airlines (which are essentially the same, though). There are no cheap flights to Bhutan.

There is another consequence: DrukAir only owns 3 long-distance aircraft. So the aircraft will leave Paro for Kolkata in the morning, then directly return to Paro and only then will it be able to fly onwards to Bangkok, etc. While there is a puffer, big delays will lead to delays for the whole schedule.

There is no visa on arrival, so before you even plan your trip to Bhutan, you have to deal with the visa requirements. Western tourists cannot apply for a visa themselves. Your tour operated has to request it for you. Which is why I should mention that you cannot visit Bhutan without a guide.

The visa process is quite straightforward and you basically just have to fill a form and e-mail it to your tour agency one month prior to your trip including your itinerary. Then you’ll receive a little visa document that you’ll have to print out and carry with you at all times. And that’s basically it. There is no fee involved.

How to travel to Bhutan from Delhi, India

The most popular way to get to Bhutan is from Delhi. There are daily flights connection Indra Gandhi International Airport with Paro. Flight time is a comfortable 2 hours 30 minutes and the distance is around 1.200 km. Bhutan is on very good terms with India, so the immigration process is rather straight forward.

I personally flew over Delhi via Abu Dhabi, as it meant the least flight time (read my review of Etihad Airways if you are interested). Flying is very stressful and I really feel it is important to reduce your time onboard an aircraft as much as possible. Ever since India allows for rather cheap multiple-entry tourist e-visas, I feel immigration is no big problem any longer.

Most importantly, international flights to Delhi are usually very inexpensive, which makes this option probably the cheapest of them all. Also, it’s the biggest airport, so you will be able to choose from a wide range of carriers depending on your personal preferences and optimal flight times.

Still, you need to allow at least 1 hour to go through immigration.

Note: There are also regular flights from Guwahati, Gaya, Bagdogra, and Kolkata, but those are not daily and probably less than ideal as an international connecting flight.

How to visit to Bhutan from Kathmandu, Nepal

As an alternative, you can also get to Bhutan from Kathmandu. Incidentally, my plane to Delhi shortly stopped in Katmandu on the way back, so it is basically the same flight. The distance is only 400 kilometers and the flight takes roughly 1 hour and 20 minutes.

Usually, there are no direct flights to Kathmandu from most western airports. That being said, a layover in Dubai, Qatar or Abu Dhabi can be a nice way to split a long flight into smaller and more manageable legs. It really boils down to personal preferences and which airlines you like to fly with.

How to get to Bhutan from Bangkok

Probably the easiest and most hassle-free way to get to Bhutan is from Bangkok Thailand. This can mainly be attributed to the fact that you don’t need a visa, so you’ll go through immigration like a breeze.

On the contrary, a quick glance at a map will reveal quite quickly that it means flying some 2.500 kilometers pasts Bhutan. As a result, you will also spend quite a lot longer on the plane (except you are coming for Oceania or East Asia).

There are two flights per week from Singapore. While Singapore airport is a dream, this is probably only an option for Australien, Japanese citizens, etc. And even then it is probably cheaper to fly via Bangkok as the Singapore connection is incredibly expensive.

How to get to Bhutan by car

As I already mentioned above, there is an overland route into Bhutan and I’d quickly like to mention it as well. While the main roads in Bhutan are, generally speaking, in fairly decent shape, it is important to note that due to Bhutan’s unique geography, the roads don’t exactly take you to places directly.

Bridges are often no possibility (they’d had to fill the gap of a chasm of 2 kilometers), so you end up driving all the way around the whole valley. Anyways, the most popular way to get to Bhutan by car is via Phuentsoling.

For Indian travelers, this is often a cheap alternative, even though it takes roughly 6 hours to get from Phuentsoling to the capital Thimphu. But for western tourists, I am not sure how convenient this route is. There are buses from Darjeeling to Phuentsoling, and the closest airport would be Bagdogra.

Samdrup Jongkhar and Gelephu in the Southeast would be the other two border towns where your guide (you cannot enter the country without one) could meet you. But again, except you plan an extended road trip through the Northeast of India, the overland route is probably not viable (nor cheaper).

Also, you should know that the Bhutanese roads can be incredibly scenic at times. But at other times they are incredibly dangerous. This will be something you have to face whether you fly or not but decide for yourself if you want to add further stress.

In a nutshell: Delhi and Kathmandu are the best ways to get to Bhutan from the US and Europe. 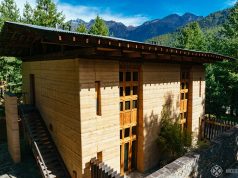 Aman Bhutan – a review of the fantastic Amankora luxury hotels 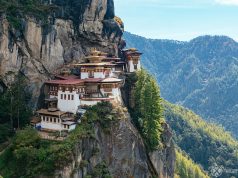 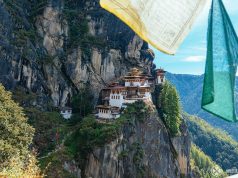 The 20 best places to visit in Bhutan