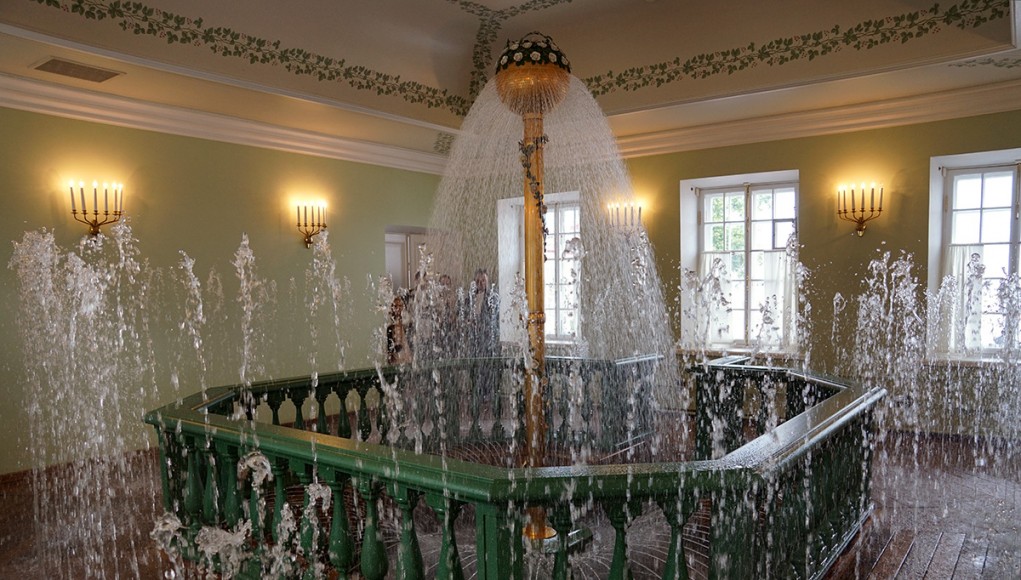 Peterhof, St. Petersburg is a grand example of the Russian Baroque. On its grounds, you will find the Monplaisir Palace, where Catherine the Great took her baths. 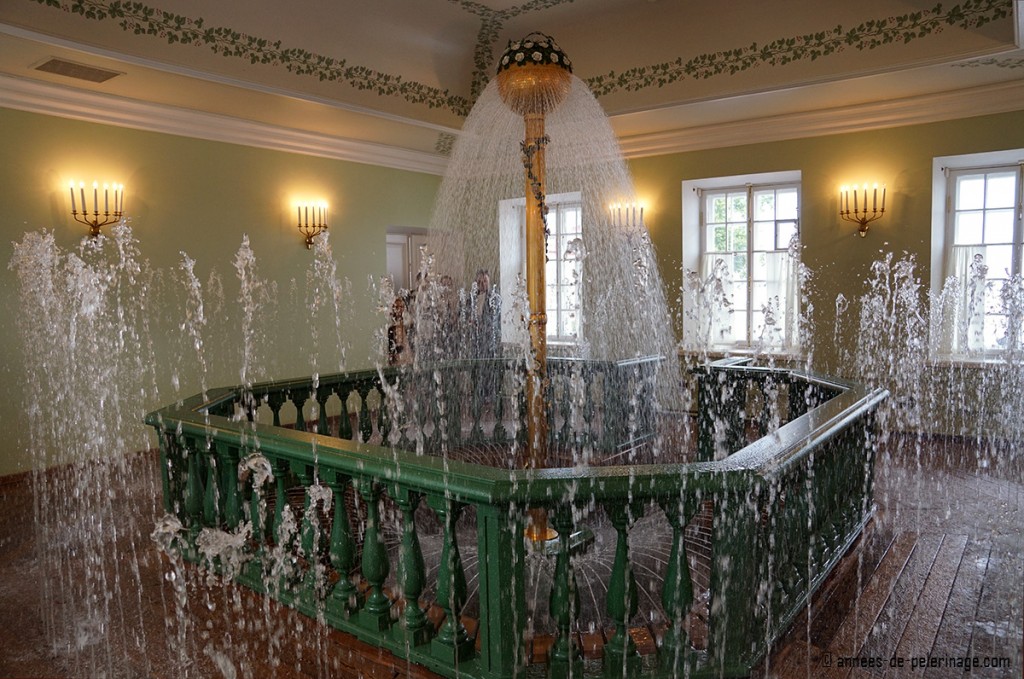 What if I told you that there is a private little palace, where you can observe the bathing habits of the Russian tsars? What if I told you that this very place lies inside famous Peterhof Palace (wrote about this amazing UNESCO site here) in St. Petersburg, yet almost all visitors skip it? Well then, be prepared to be amazed by this unique insider tip.

Peterhof has often been compared with Versaille. In both cases, the megalomaniac golden splendor attracts a million tourists each year. But while the gigantic castle in the suburbs of Paris is famous for its lack of toilets, Peterhof boasts a host of answers to the cleanly matters of the court. The answer is called Monplaisir – my pleasure. 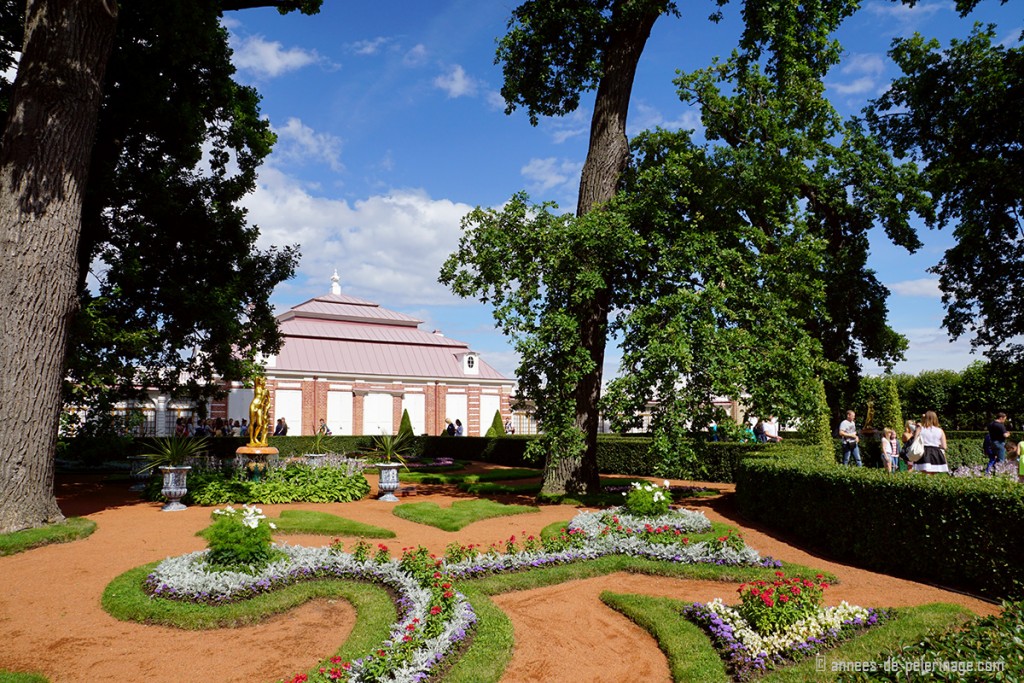 The name alone indicates an intimate affair. My pleasure, not yours nor ours. Mine. Above all Monplaisir was the pet project of Tsar Peter the Great, designed as a private retreat from the court and all the demands of the state. In this, almost insignificant, brick house he would entertain his most trusted friends and advisors. While it did feature a banquet hall and a reception room, the most striking feature of Monplaisir Palace are its outstanding bathing facilities.

The Bathhouse Wing of Monplaisir 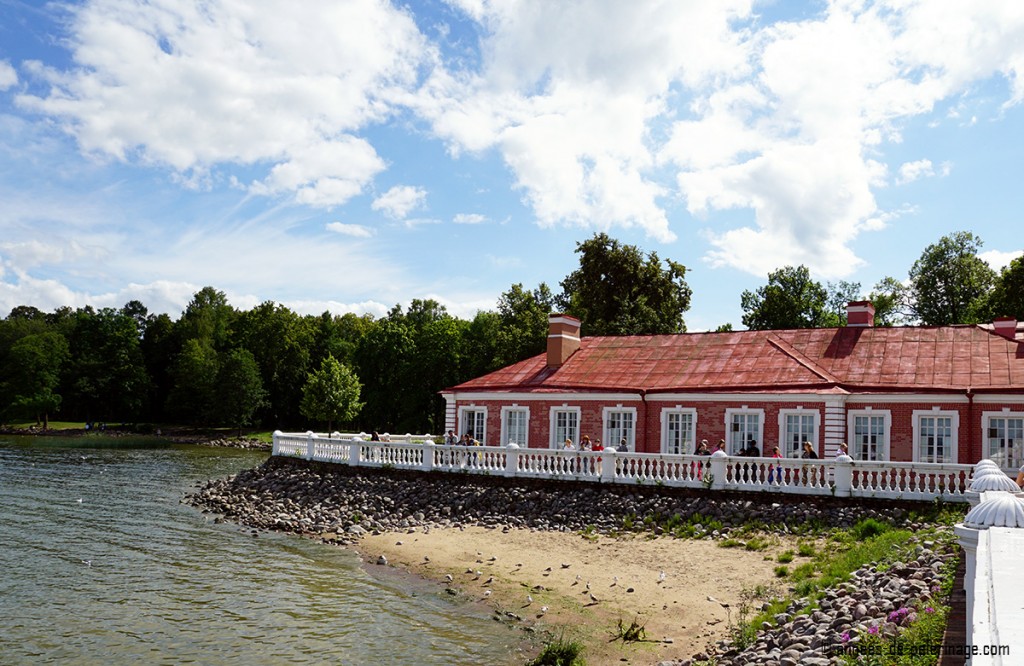 Monplaisir sits at the very tip of the Peterhof property, overlooking the gulf of Finland in an almost rural way. Monplaisir was completed in 1723, but it was not until the death of its founder, that Catherine (who would later become Catherine the Great) added the bathhouse wing. It is those later additions that will give you an intimate glimpse into the bathing culture at the Russian court. 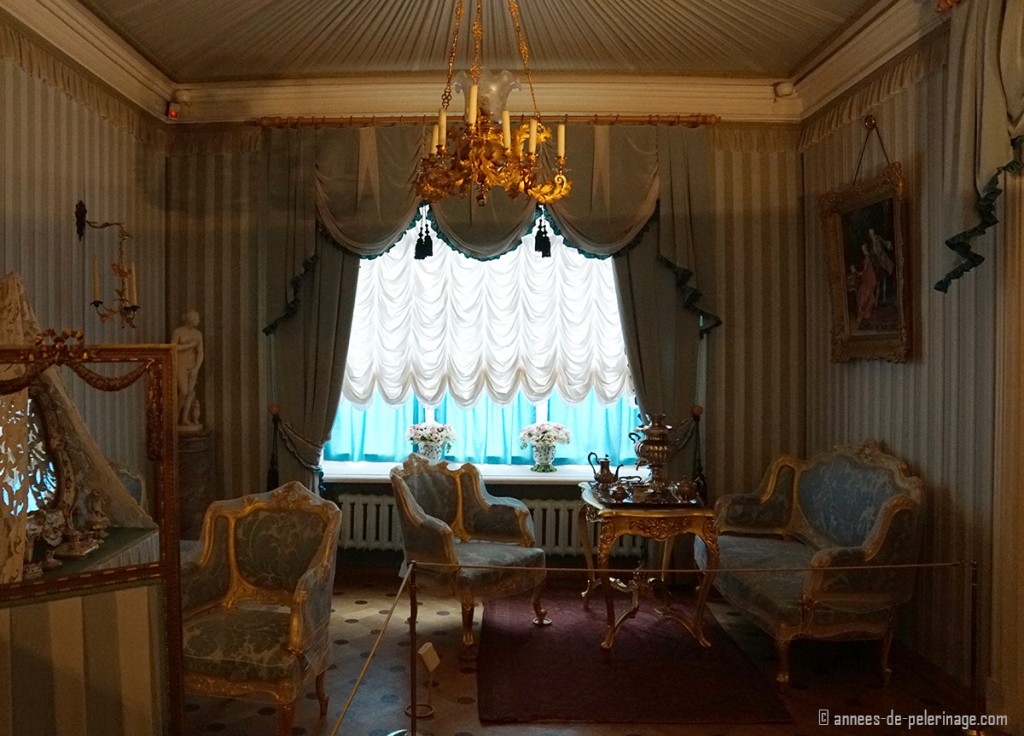 As you enter the bathing wing of Monplaisir, you will most certainly be struck by the fact of how small it at all is. When you read the histories and visit all the spectacular palaces around St. Petersburg and Moscow (wrote about the spectacular Kremlin here; and Catherine Palace here), you soon get the impression that under the reign of the tsar’s everything had to be larger than live. But apparently, when in private, there was a grand need for intimacy. Though I really have to say that it all reminded me pretty much the luxury hotel I was staying during my time in St. Petersburg (read my review of the amazing Four Seasons Lion Palace here). 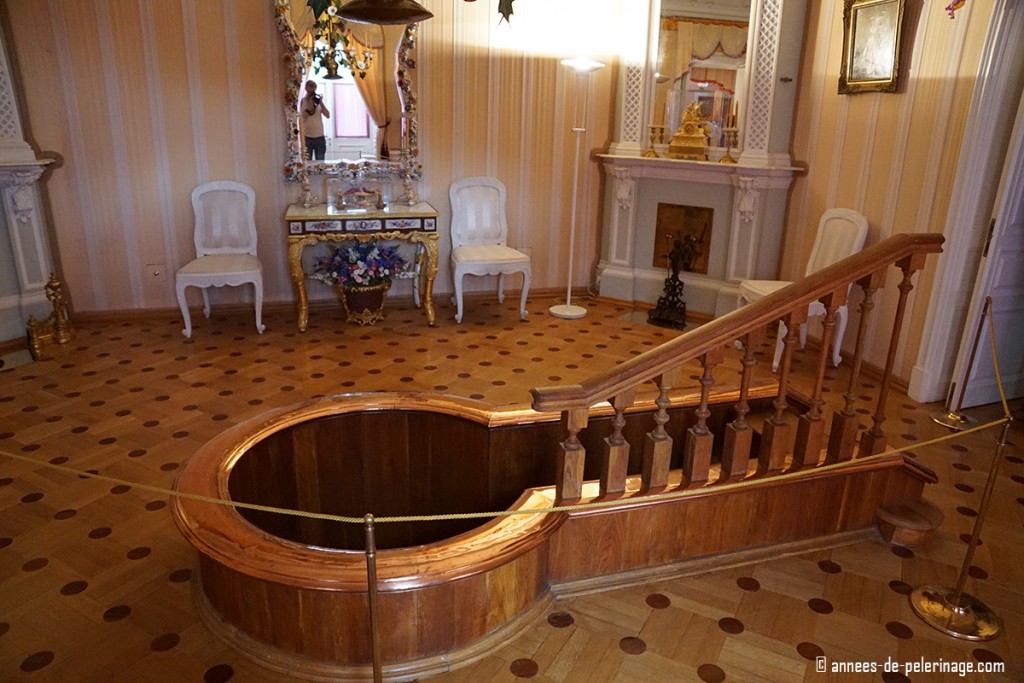 Small as the bathhouse is, it is equally as odd: Within you will find a wooden contraption with a stair and handrail attached to a copper rim. I am sure it might inspire modern interior designers with an idea or two – but as a whole, it appears more than quaint. I mean, this was built for the tsars! Compare that with the grand pools of our age. I am just thinking of my visit to the more than amazing Six Senses in Koh Yao Noi and its infinity pool overlooking the Andaman Sea. 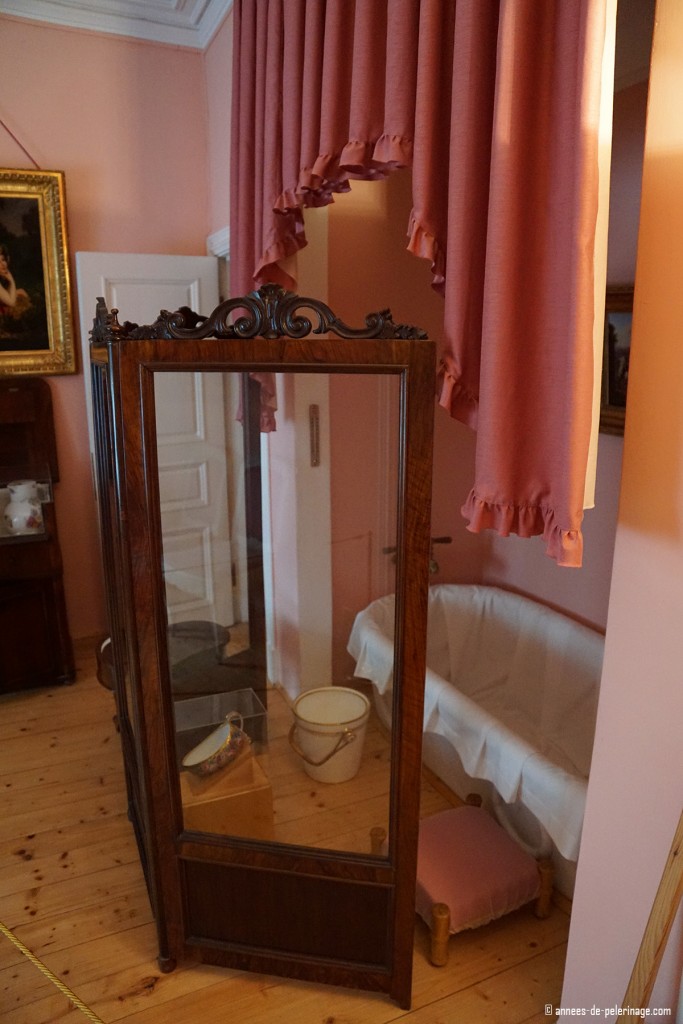 It really makes you savor modern technology and inventions in a very special way. If you have a look at the other bathtubs within the Bathhouse Wing of Monplaisir, the odd feeling lingers. But then again you should be very aware of the time these facilities had been built. 18th century Europe was not a period in history famous for its cleanliness. What the tsars installed here was indeed the state of the art at that time.  Remember that warm water was considered harmful until the 19th century. Also, be aware that complicated plumbing systems were all but lost since the Roman times and were only about to reemerge for indoor applications. 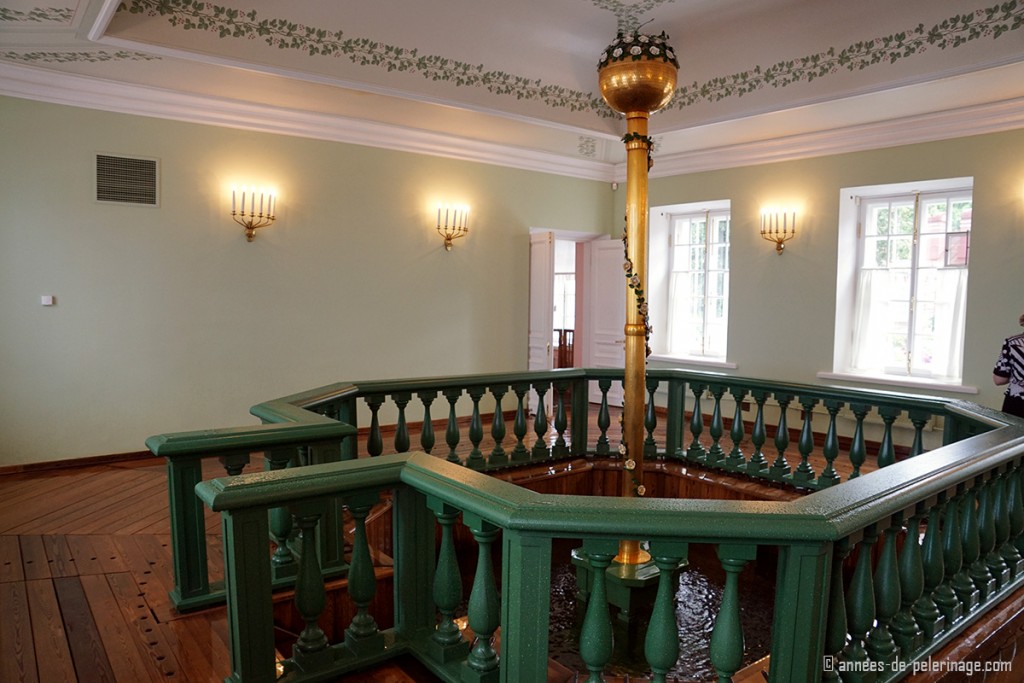 But to stay true to the facts: It is a common misconception that people of the 18th century were excessively dirty. They did, however, have a different take on cleaning. You’d have to skip your morning shower because showers really did not exist back then. It was sponge and basin! Well with one exception – Monplaisir actually had a shower. In the middle of the Bathhouse Wing, you will find an incredibly ingenious pool. Rimmed by yet another handrail, it is best described as an indoor fountain. 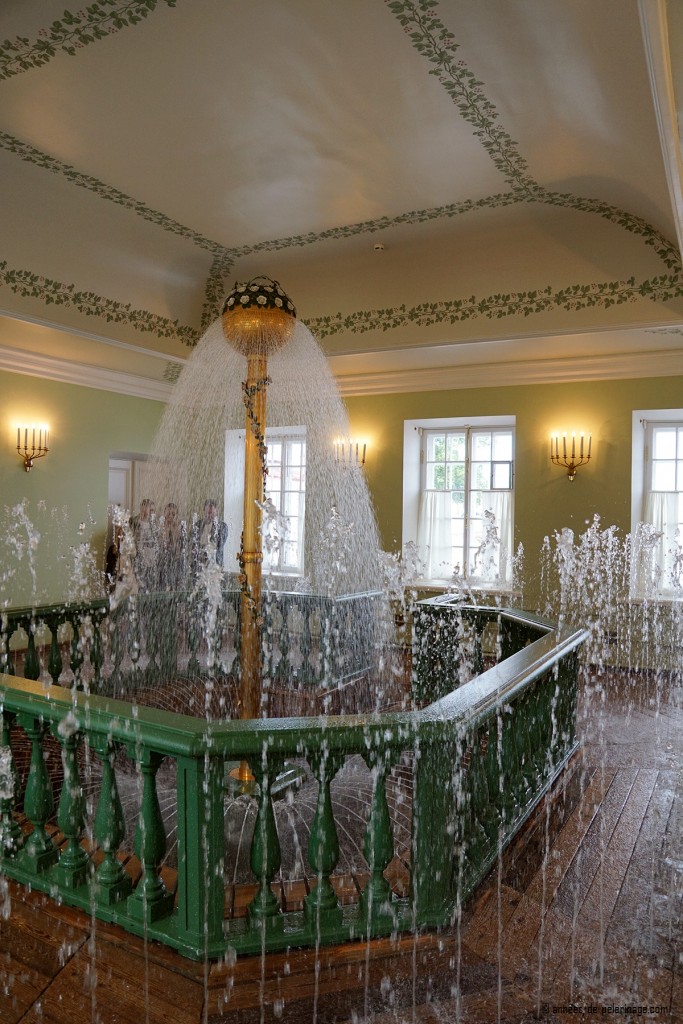 Again the sheer oddness of it all is almost overwhelming. Here you have this beautiful fountain – but the floor around it is wooden and the walls around it make you beg for tiles. Also, the amount of water sprouting here and there makes you wonder just how pleasurable this all was. I certainly couldn’t help but wonder how the tsars frolicked among the gurgling waters, wearing whatever the 18th century deemed proper bathing apparel.

Sauna and Treatments for the Tsars 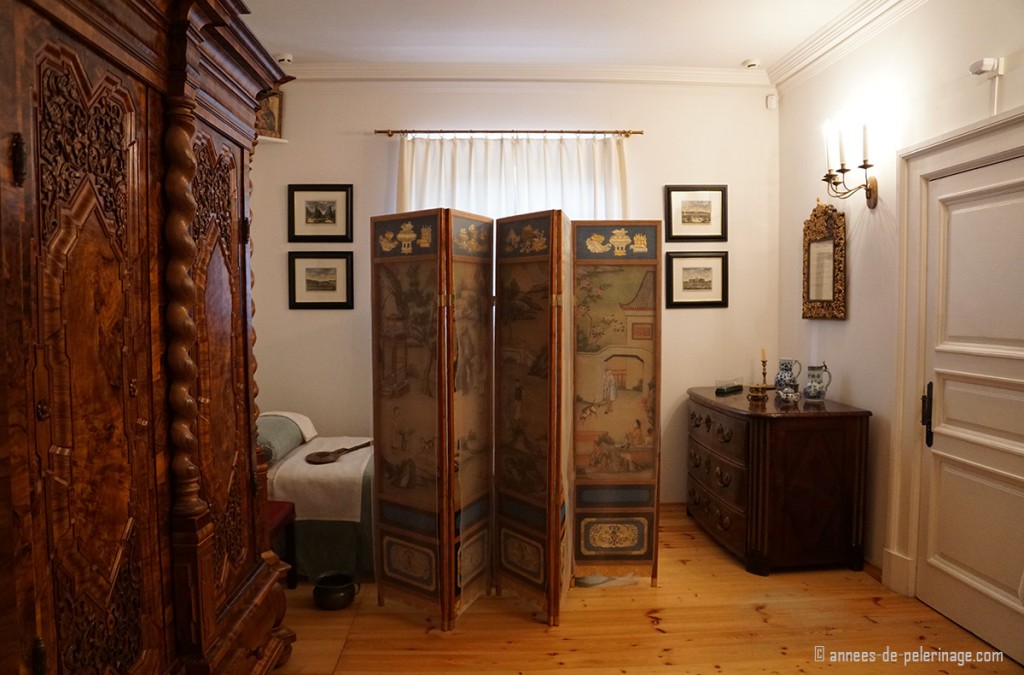 Not all rooms of the Bathhouse wing of Monplaisir were made for sheer pleasure. There is also an examination room with some medical instruments from that time. Bathing was, among others, considered a treatment. Quite a modern idea if you think of the extensive spa menus some luxury hotels offer these days. 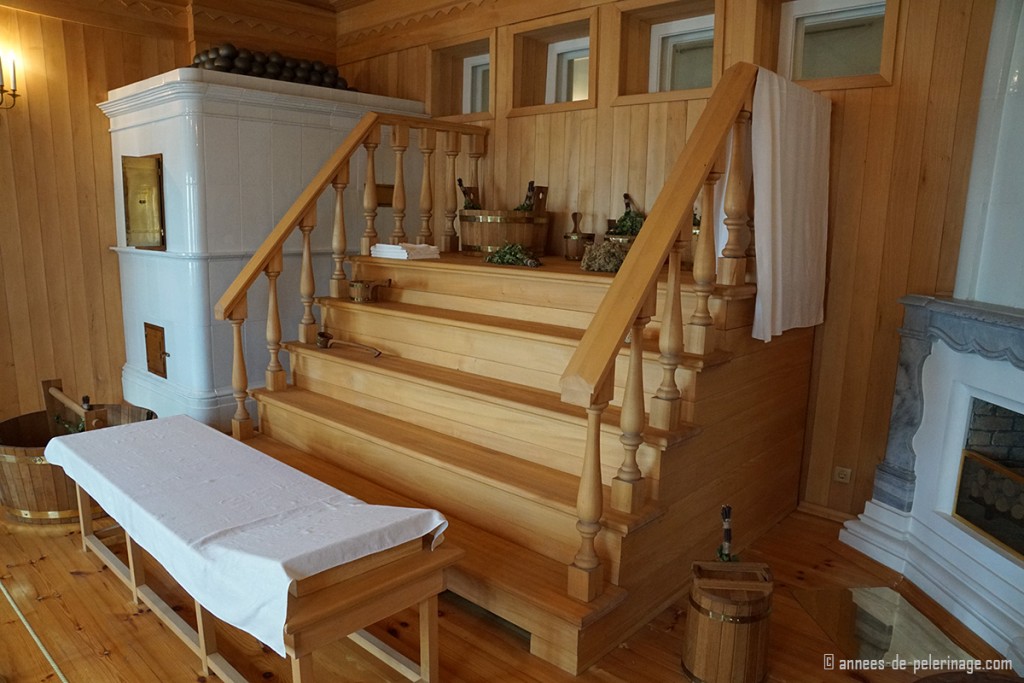 St. Petersburg is only a couple of kilometers away from Finland. So it comes as little surprise that a sauna can be found in the Bathhouse Wing. The steam room is, all things considered, incredibly modern – having windows to enjoy the ocean vista. But it is also sooo neat! Had I the chance, this really was the only room I would personally use.

Actually, there are two steam rooms, the one a bit smaller, but just as lovely!

The odds and ends 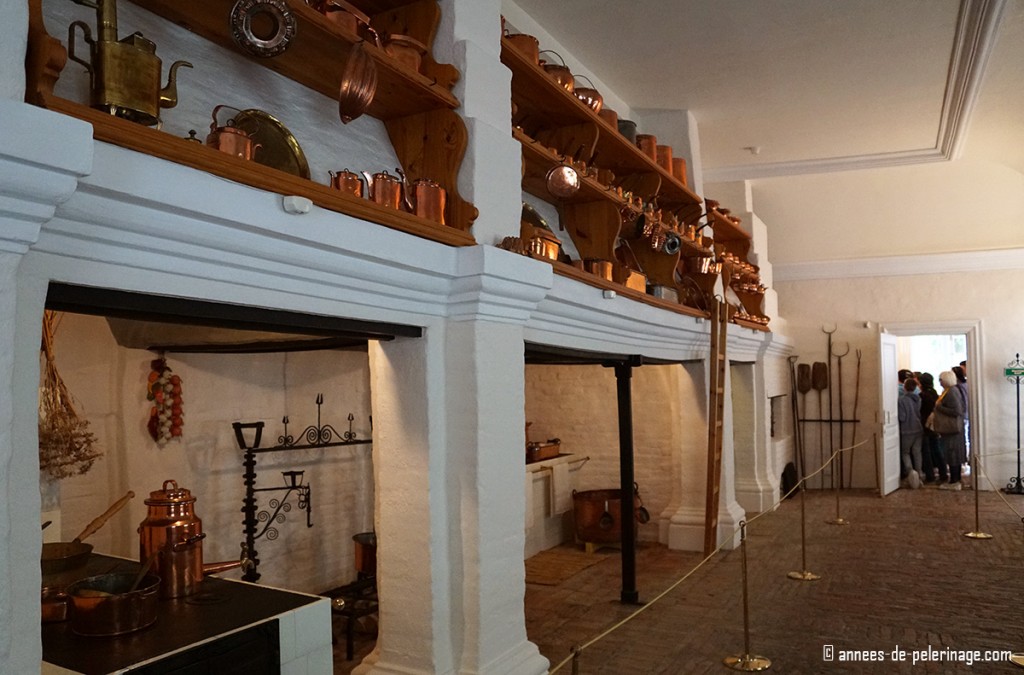 I don’t understand just why, but within in the Bathhouse Wing of Monplaisir Palace, you will also find a huge kitchen. Shiny copper kettles and pans are hanging from large racks. Allegedly Catherine the Great sometimes stood at the hearth herself, cooking for her guests. 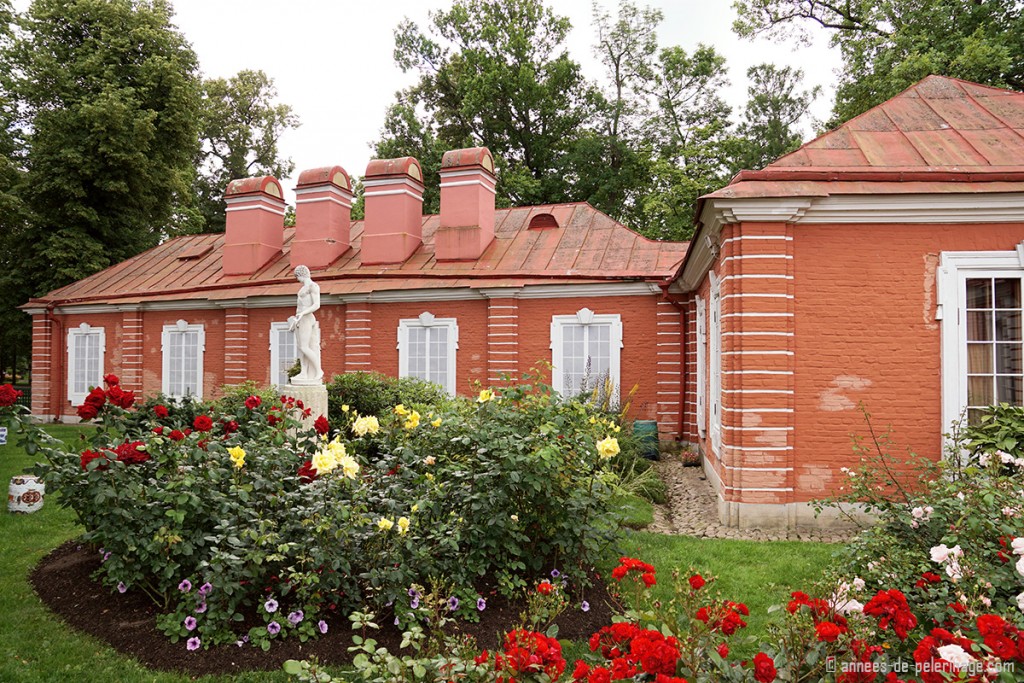 Whether that is true or just a persistent myth I do not know. It remains a fact, however, that everything you saw has been meticulously restored from original sketches and whatever survived WWII. Peterhof, much like the rest of St. Petersburg, suffered severely during the siege of the Nazis. So perfect are the reconstructions, that you will hardly notice the difference.

Personally, I absolutely enjoyed visiting the Bathhouse Wing of Monplaisir. I’ve seen my share of baroque castles around the world, and all that golden splendor gets repetitive after a while. I am tired of seeing yet another grand bedroom or throne. I want to get the look behind the curtains and the Bathhouse Wing of Monplaisir Palace offers you just that. My verdict: Absolutely do visit! 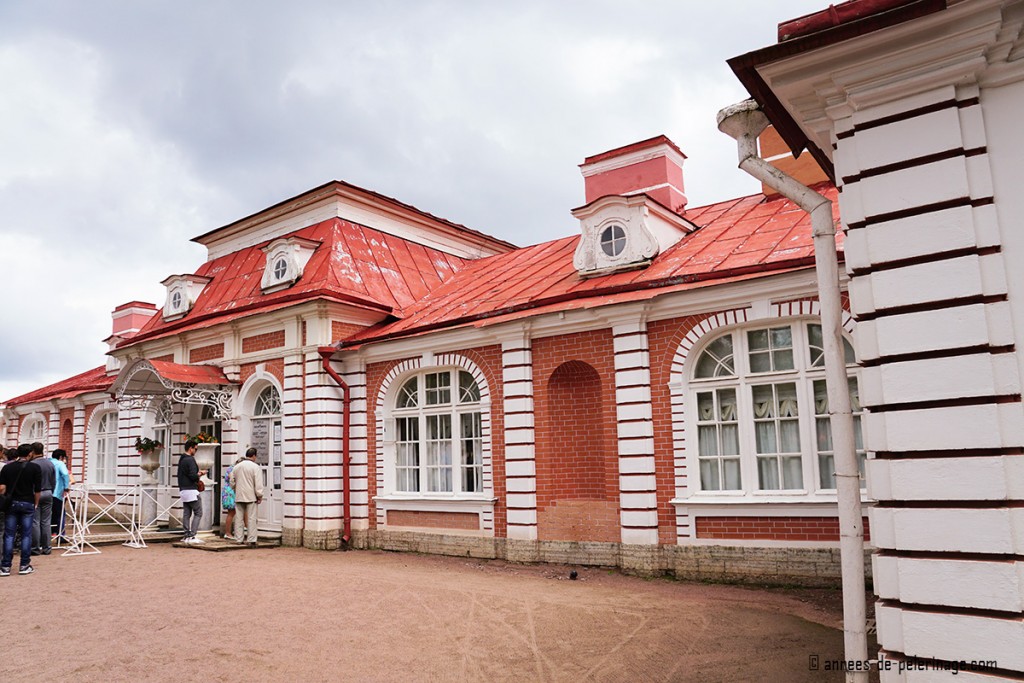 Tickets for the Bathhouse Wing can be bought directly at the entrance of Monplaisir. They are not included in your general Peterhof entrance fee.