Home Travel guides 10 amazing things to do in Samarkand 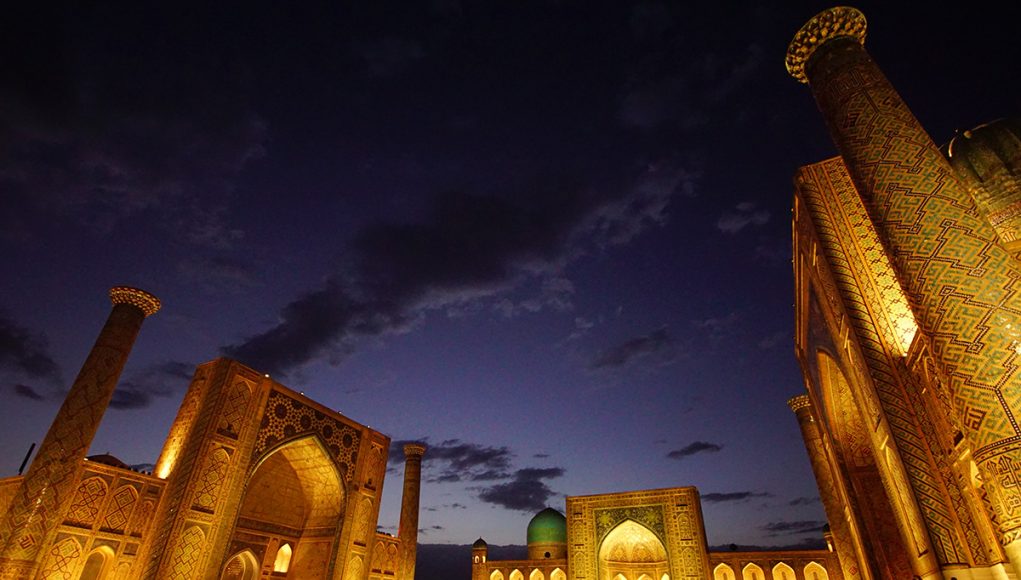 Paris, London, Rome – ask 20 people what they think the most beautiful city on this planet is, and you will probably find these among the top results. (Check out my guides to Rome and Paris to see for yourself). It will be a very rare day when someone will answer with Samarkand, Uzbekistan. It’s more likely that people will reply with an astonished “Uzbeki-what?”. Yet it is my honest opinion that Samarkand is one of the most beautiful cities on this planet. Here is why:

Samarkand is, however, not only beautiful beyond comparison, it is also one of the oldest cities on this planet. Current evidence suggests that the land has been settled as early as 40,000 years ago. The city itself was founded around the 7th century BC, making it even older than ancient Rome.

It truly blossomed under the rule of Timur in the 14th century and the heydays of the Silk Road trade. It is from this period the fascinating mosques, mausoleums, and madrassa survived. These will be your main reason to visit the grand city, and what a reason they are. If you are currently in the process of planning a trip to Central Asia,

I do recommend you to read my Silk Road itinerary. Why? Because beautiful as Samarkand is, there are so many other things to do in Uzbekistan! :) Not convinced yet? Well then, guys and girls, what follows is my list of 10 things to see in Samarkand, beautiful pictures included. 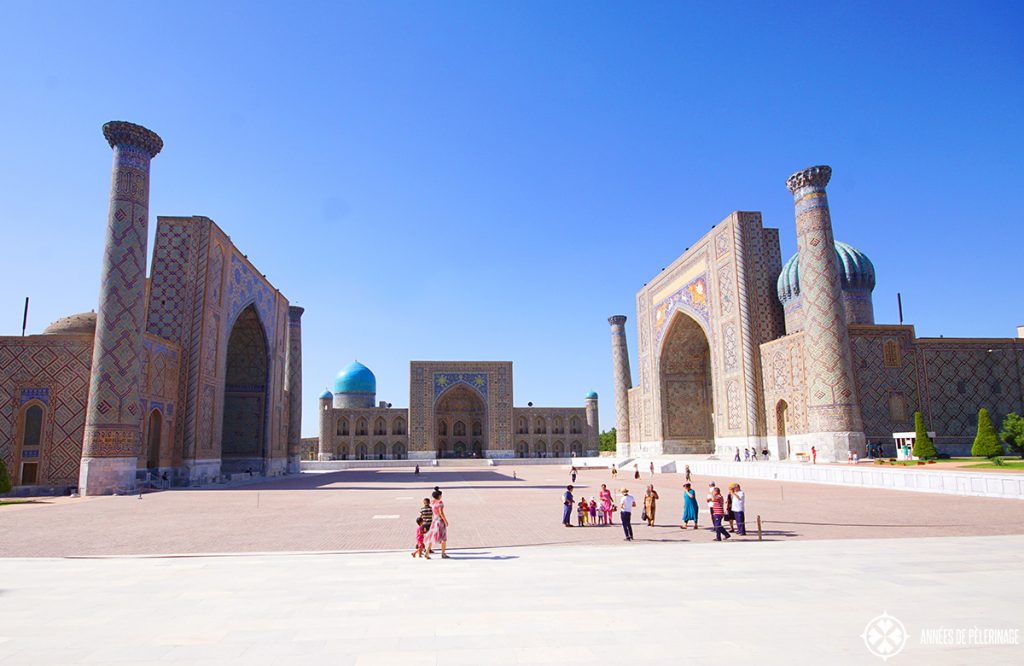 If beauty has a name, then surely it must be Registan. It consists of three distinct madrasahs (Islamic schools) around a central plaza. Each of them is in itself a prime example of Islamic architecture, only rivaled by Isfahan (Iran) itself. 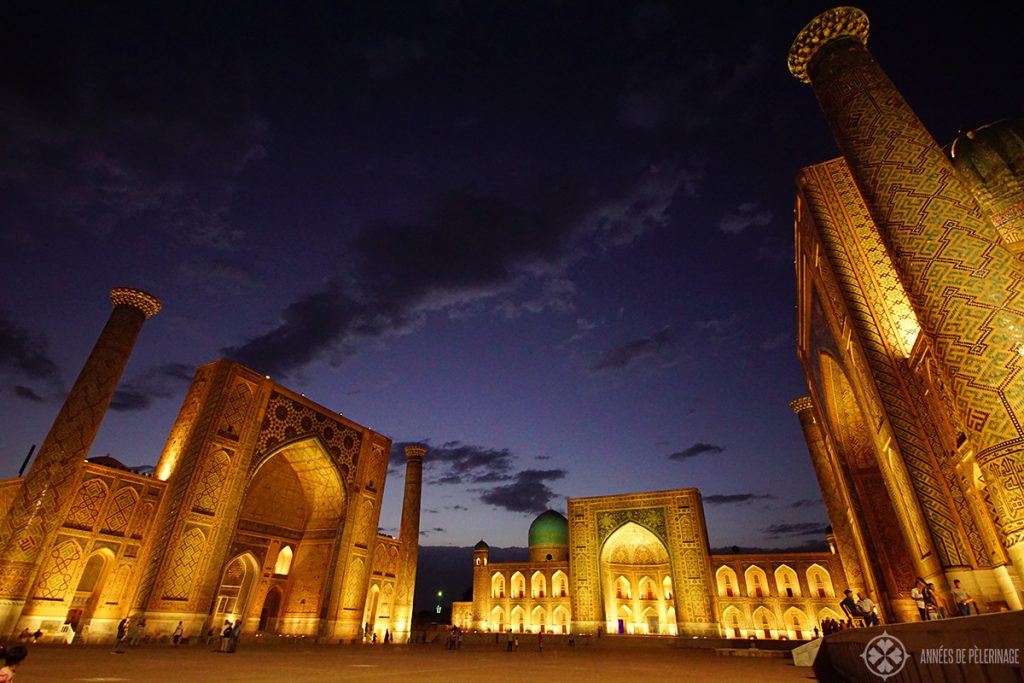 Consider going here once during the daytime and once at night. The whole square is illuminated via an intricate light show, creating a fairy tale straight out of the Arabian Nights. Locals will stroll around in surrounding the parks then, and the temperatures will be so much cooler. 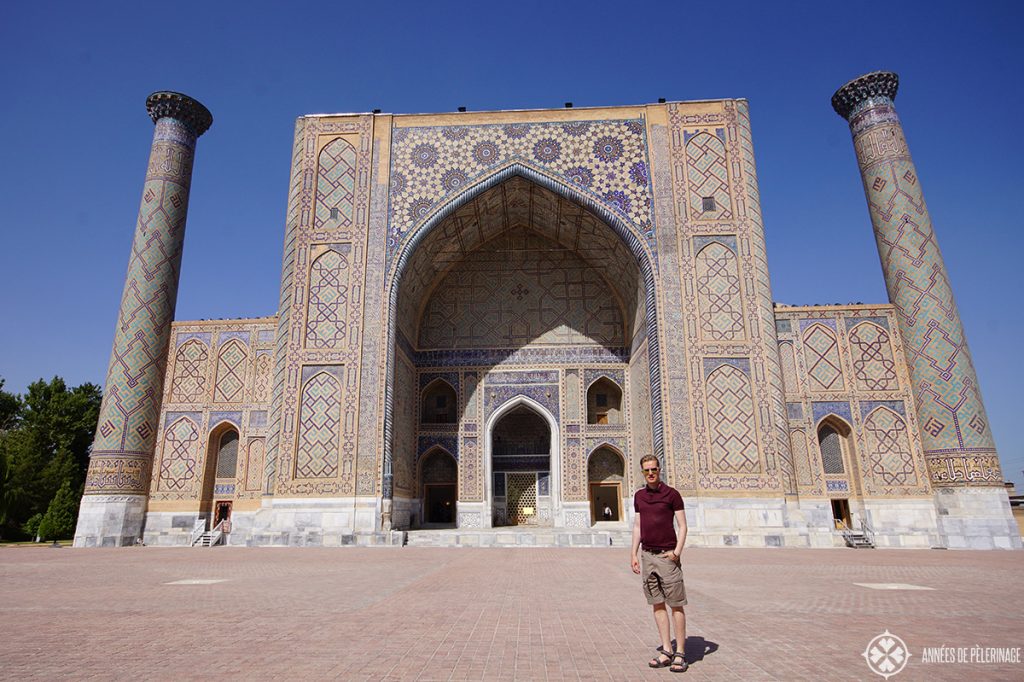 The Ulugh Beg Madrasah is the oldest building of the Registan Ensemble and dates back to the early 14th century. Once it has been one of the finest universities in the whole Orient. Today, only its utter beauty remains. Absolutely do get inside to explore the gardens within. 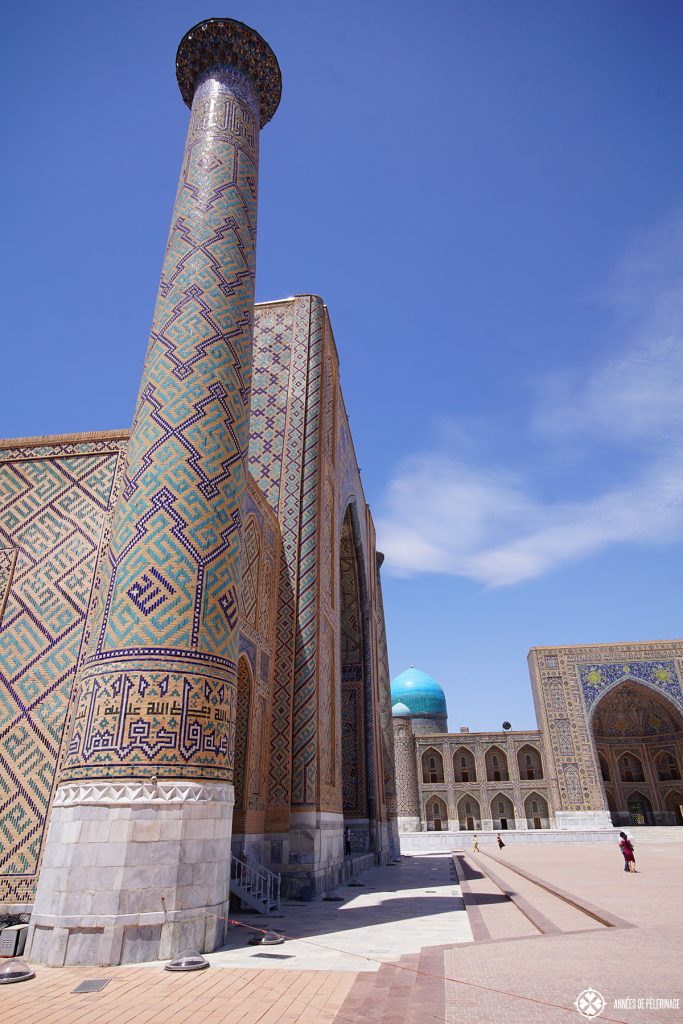 Insider tip: If you bribe the soldiers on the square, you will be able to climb the minaret for a rather stately sum of 20.000 som. Having done it (pssst!), I am not utterly convinced the view is really worth it. The whole minaret is severely leaning to one side, so the hike up the exceedingly narrow minaret will be quite scary. 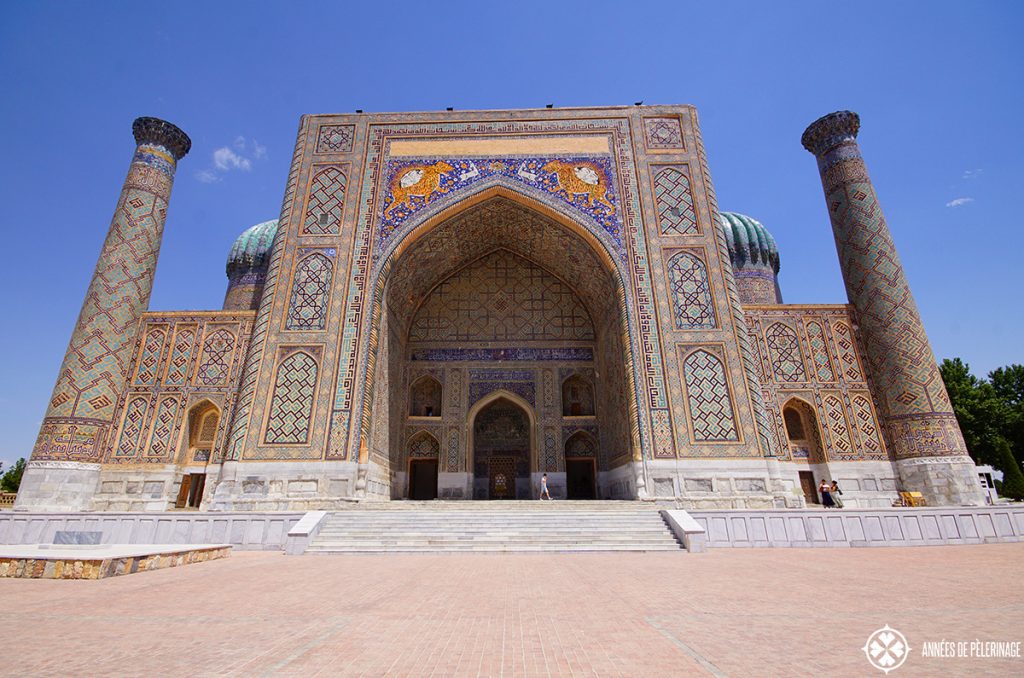 The second Madrasah to be built on the Registan square is the Sher-Dor Madrasah from 1619 until 1636. It is one of the very few religious buildings flouting the general Aniconism in Islam. Ani what? The depiction of god, the prophet, people and animals, in general, became quite unpopular in the Islamic world starting from the late medieval time – especially in public buildings. This absence is called Aniconism. 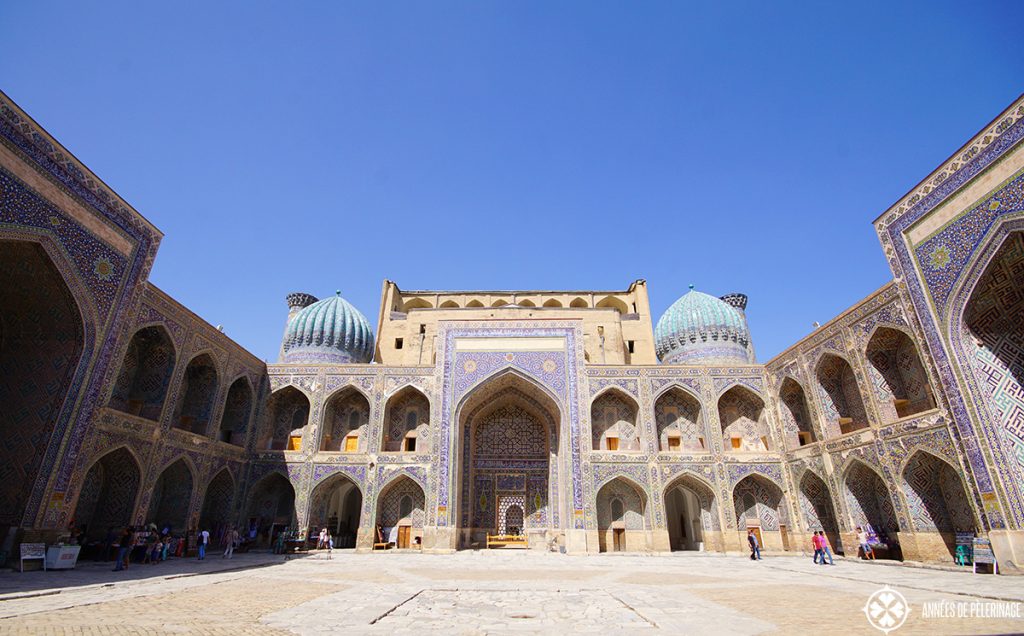 So do look closely to see the two grand tiger mosaics abutting the grand arch. This is especially noteworthy because Uzbekistan was not one of the far-flung Islamic countries (like Spain and the Alhambra), but so very close to the core. Either way, don’t forget to marvel at the sheer artistry of its onion domes. 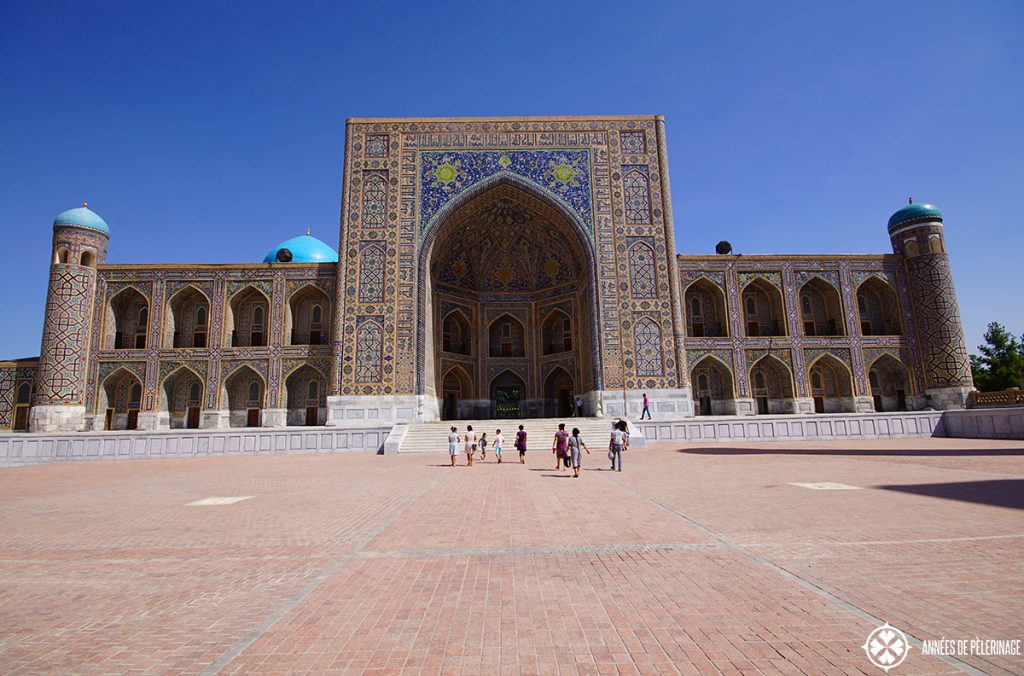 Last, but not least among the Registan Ensemble is the Tilya-Kori Madrasah. Built only 10 years after the Sher-Dor, this unique Madrassah features a wonderful mosque in its quiet courtyard. As the central piece of the whole square, it certainly stands out the most, and it is certainly one of the must-see attractions in Samarkand. 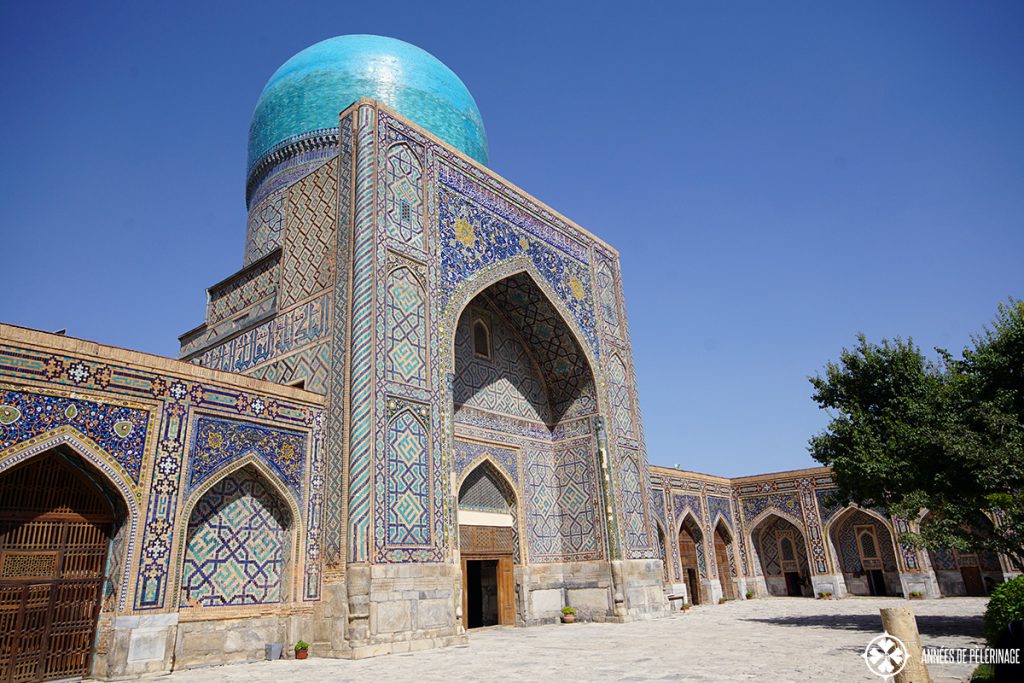 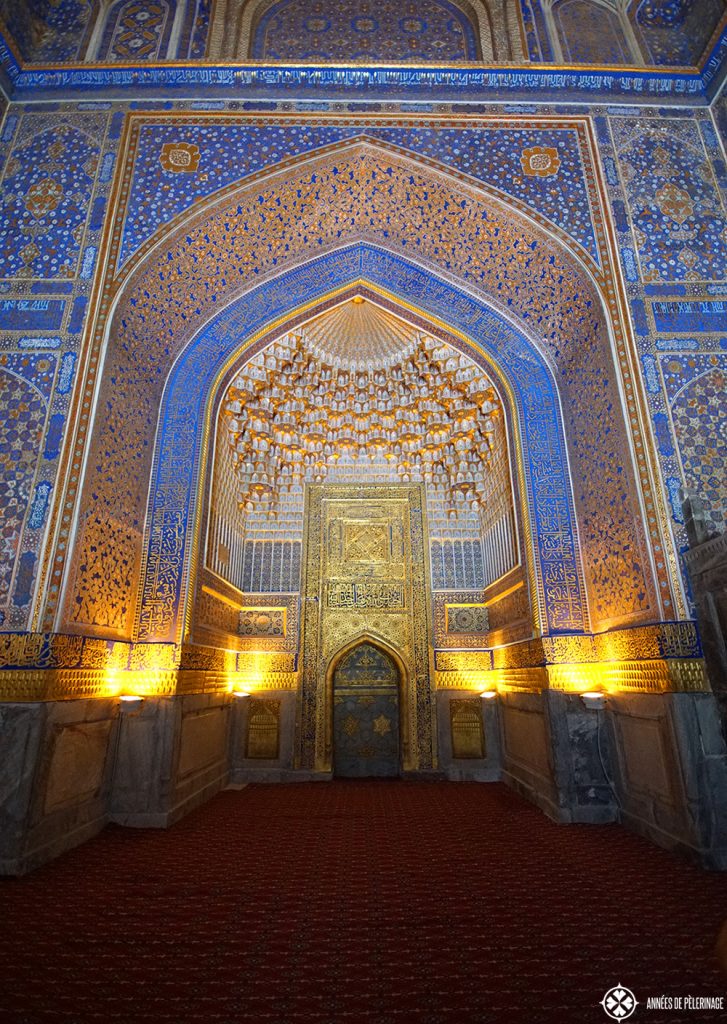 Don’t be afraid to get inside. It is a museum these days (like the rest of the Registan). Out of respect you really should wear modest clothing, though! Still, you will actually find a little museum and even a shop inside. So really don’t overdo it with your modesty. 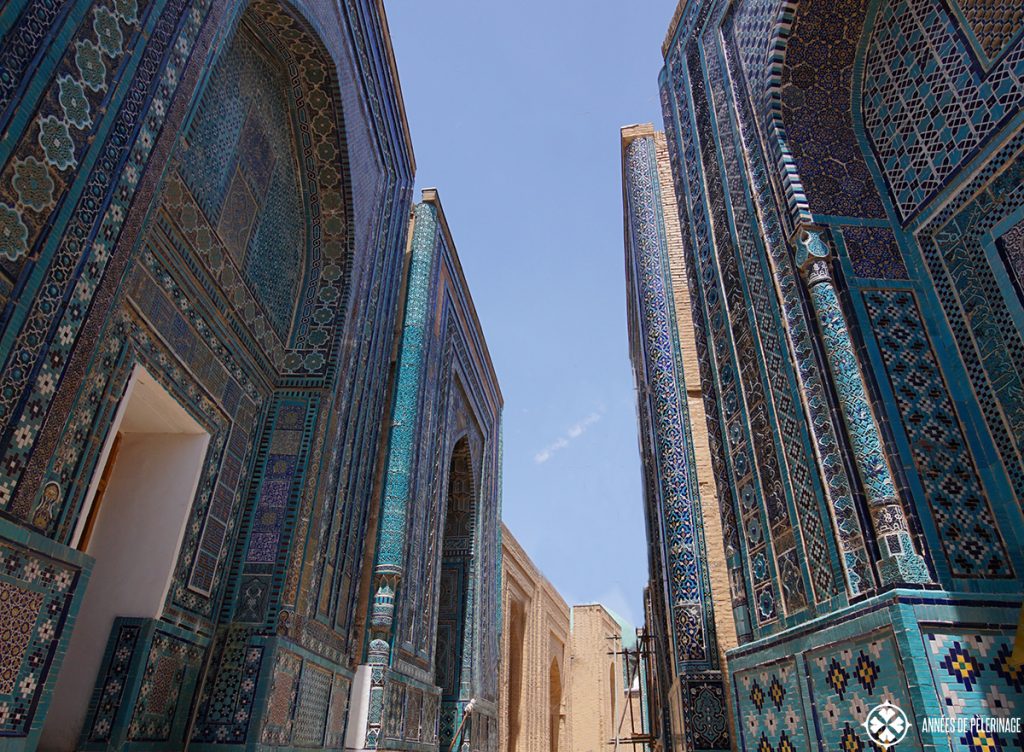 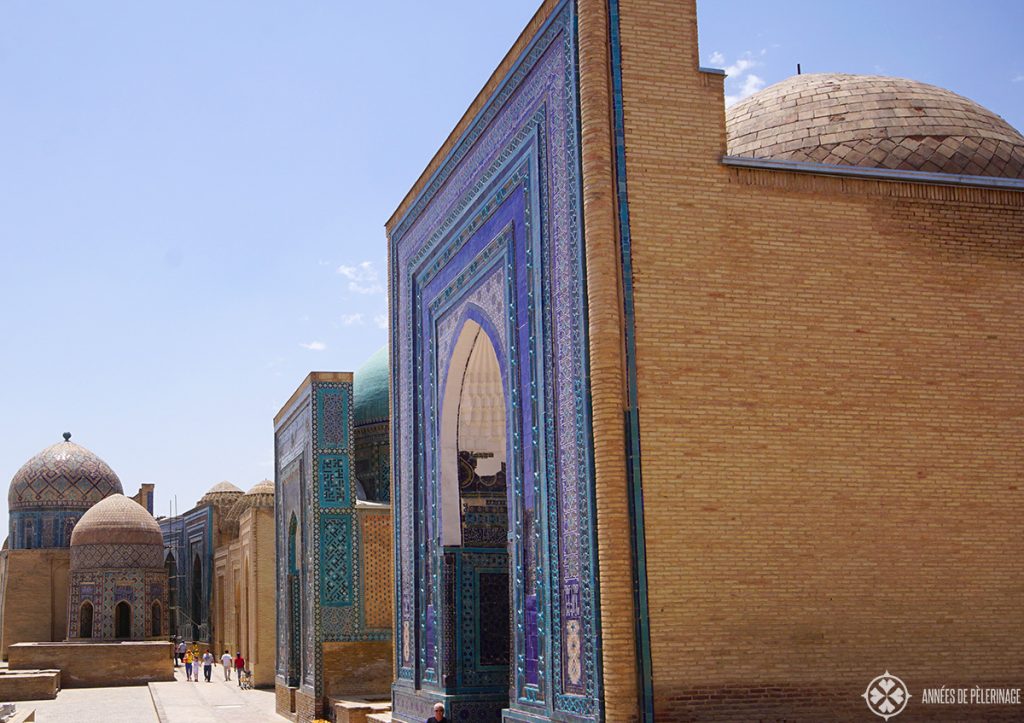 If you thought the Registan was beautiful, then you have not seen the Shah-i-Zinda necropolis. Imagine a blue tiled maze from the 14th century, losing itself in infinite geometric patterns. This and so much more is the Sha-i-Zinda necropolis. 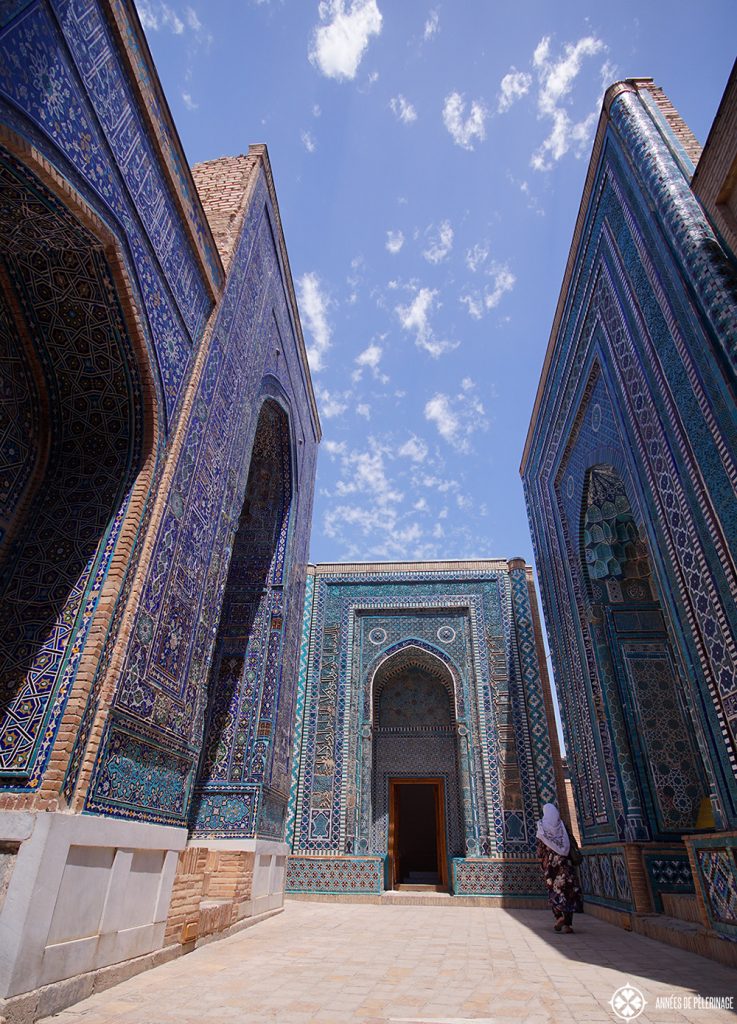 Basically, it is a glorified graveyard for the Timurids and later ruling dynasties and notables of Uzbekistan. Starting from the 9th century, work basically never really stopped on the whole complex, with new buildings being added over the centuries. Personally speaking, I think this is the most beautiful site in Inner Asia, and certainly in Samarkand. If I had to pick only one item of all these things to do in Samarkand, I’d always pick the Shah-i-Zinda ensemble! It truly feels like a piece of heaven. 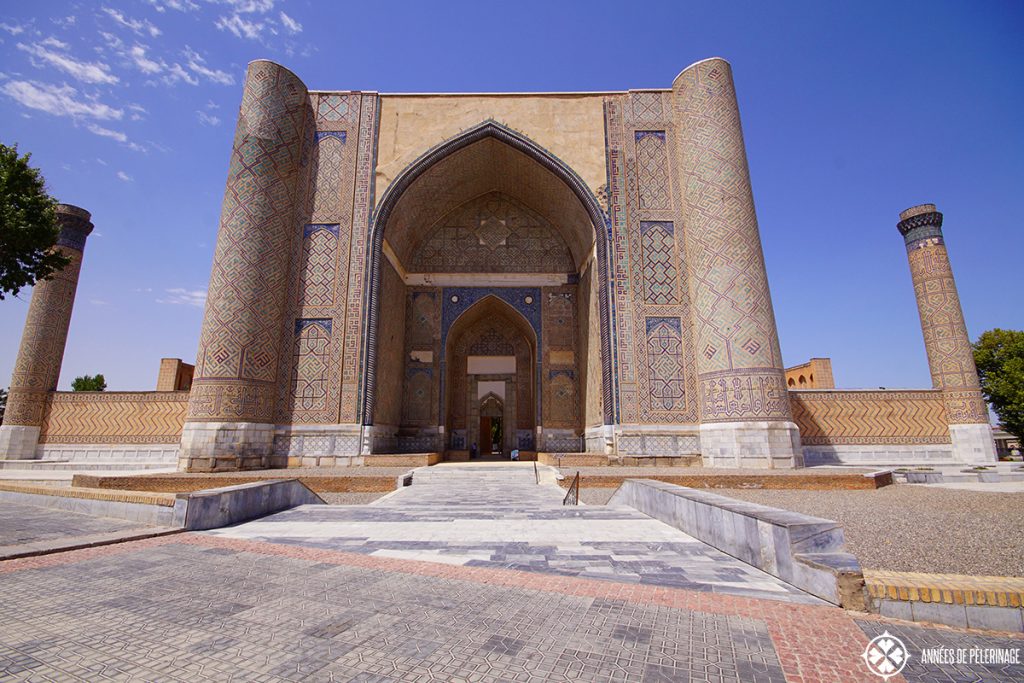 The Bibi-Khanym Mosque was once one of the greatest mosques in the whole Islamic world. The grand Timur (again) started the construction, but due to its daunting plan, the courtyard mosque real was not built to last. In fact, only 100 years after the construction had started the mosque lay basically in ruins. 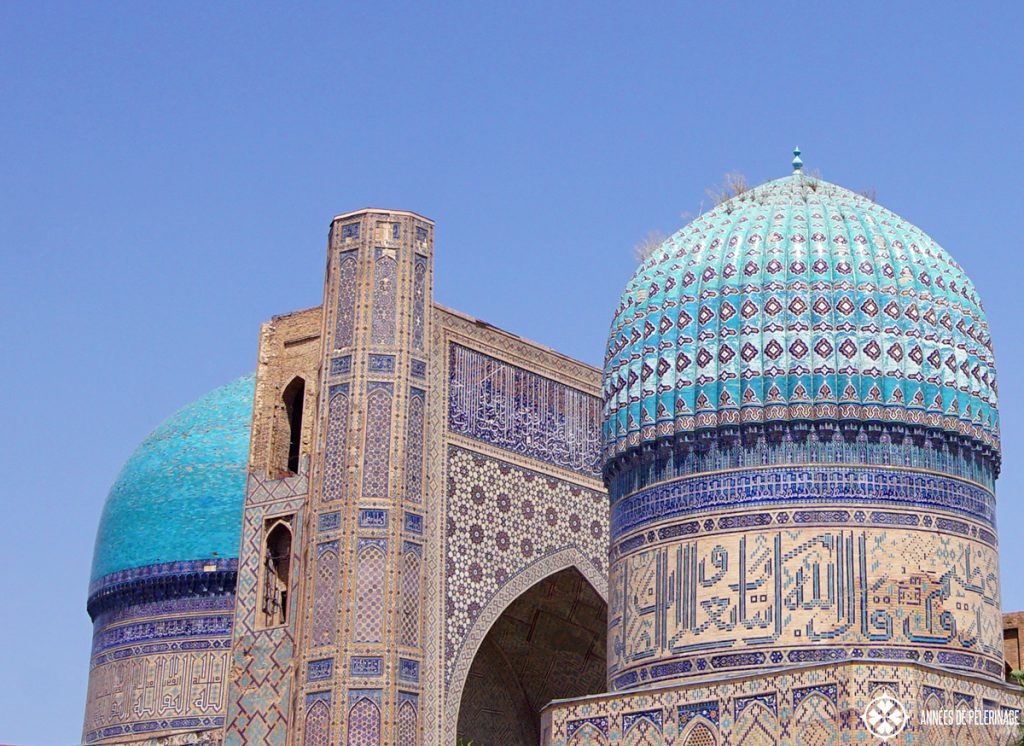 Reconstruction work started in 1974, still under the Soviets, and is being continued until today. Given how very big the mosque is, the restoration still continues, with no end in sight. Still, the facades, especially the majestic entrance arch with its height of 35 meters, will impress you nonetheless. Absolutely do go inside!

A similar mosque stands in Bukhara. Find out more about this amazing stop on the Silk Road in my guide. 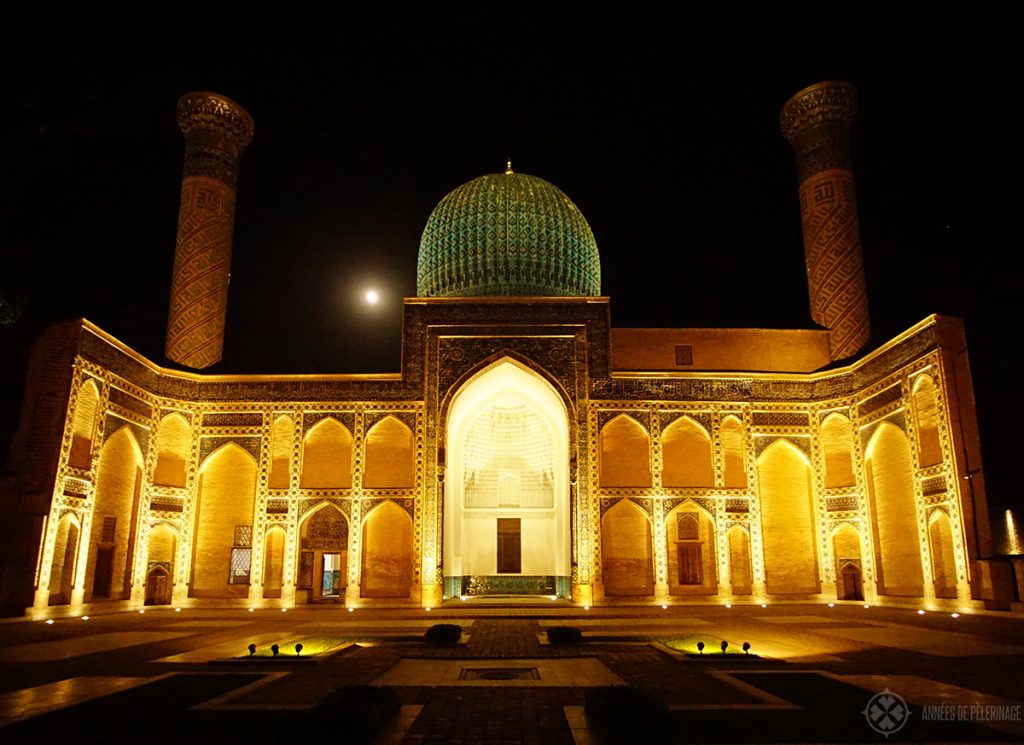 If you read this guide closely, you heard the name Timur quite a lot. He was one of Uzbekistan’s greatest rulers, and it comes as little surprise that his grave is just as impressive. Roughly 500 meters away from the Registan you will find his mausoleum – the Gur-e-Amir. 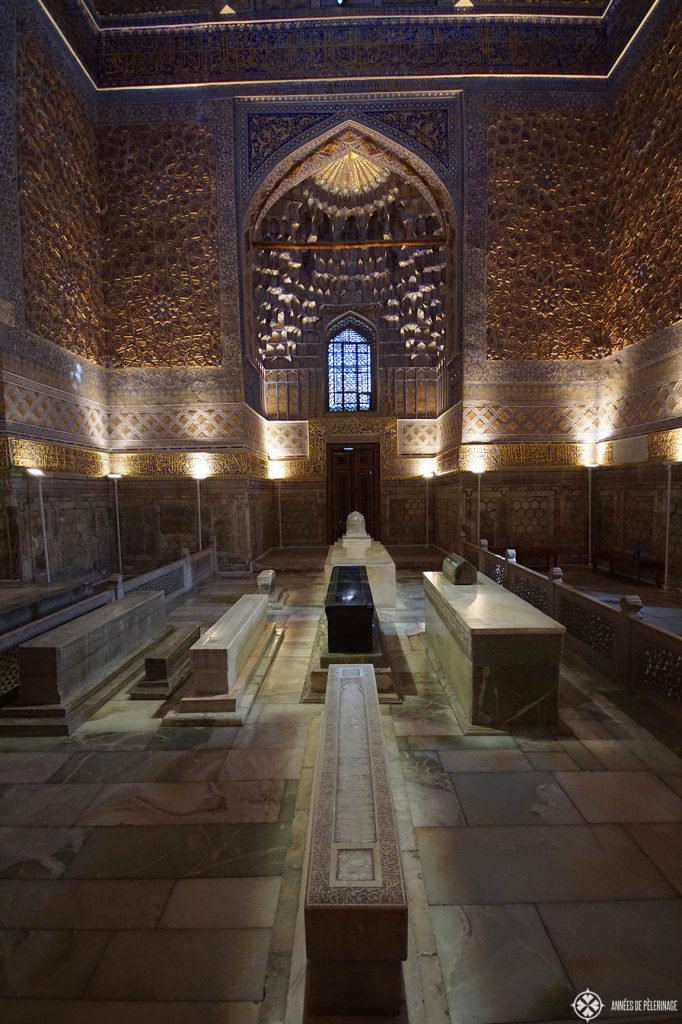 Much like the rest of Samarkand, this great site fell into disrepair starting from the 17th century and the decline of the Silk Road trade. Only in recent years, interest for the historical highlights is on an uptrend, which ultimately led to the reconstruction of Timur’s mausoleum as well. Absolutely check it out at night, when a light show illuminates its beautiful domes and courtyards.

Ulugh Beg was one of the Timurid rulers. But he was also a renowned astronomer, mathematician, and sultan. He ordered the construction of a grand observatory in Samarkand, where he worked himself. The main feature was a grand sextant with a radius of 40,4 meters, of which only the lower half survived.

With this instrument, Ulugh Beg was able to calculate the duration of the tropical year with an error of only 25 seconds. Not even Copernicus came as close! But it gets better. His values for the axial tilt of our earth were as precise as the most accurate current measurements. It thus remains a sad fact, that religious fanatics destroyed his observatory in 1449, only to be unearthed 500 years later. What remains, is still as impressive! The attached museum is quite good (which is rare for Uzbekistan). 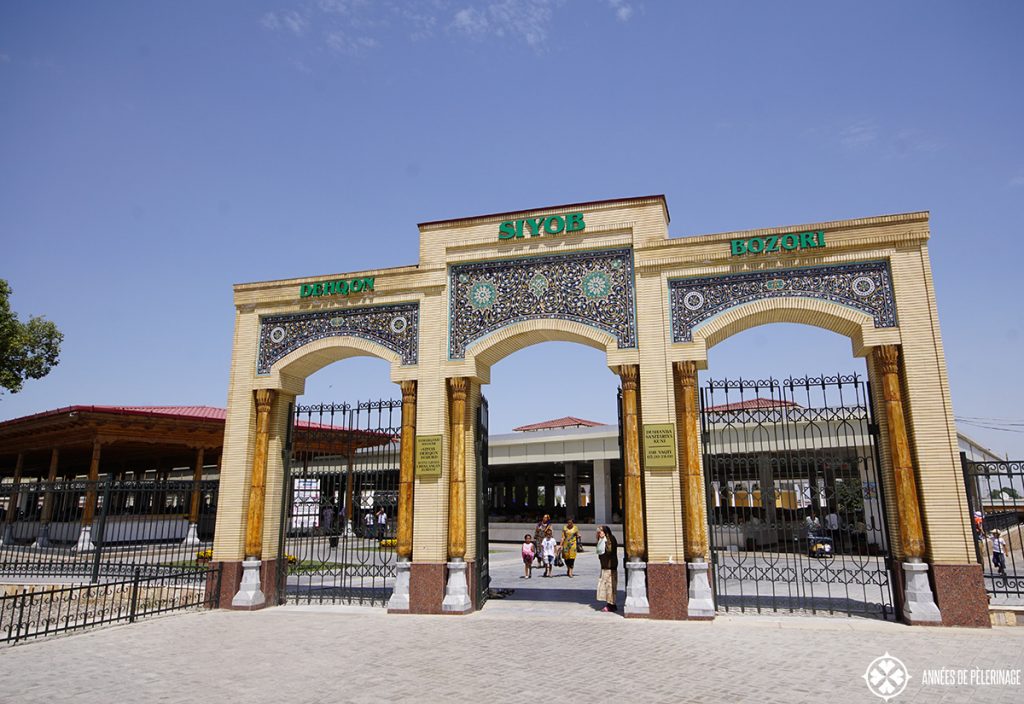 No Uzbek city can do without a bazaar. Samarkand’s bazaar is a buzzing hub of daily activity. Vegetables, dairy products, meat, fish – you will find all daily necessities here. Marvel at the sheer amount of food that is being displayed and don’t be too afraid to take a bite! :) 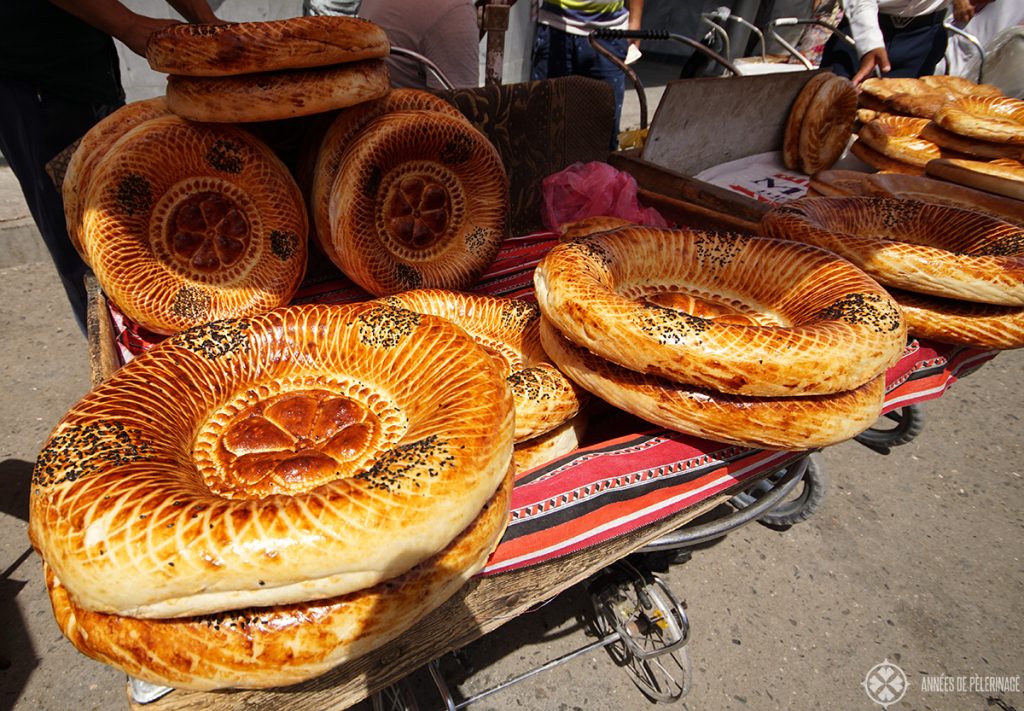 Most famous of them all is certainly the Uzbek bread or naan as it is called in the local language. These golden loaves come in many shapes and sizes, and you should certainly try them during your stay! Some of them are closer to art than to food. 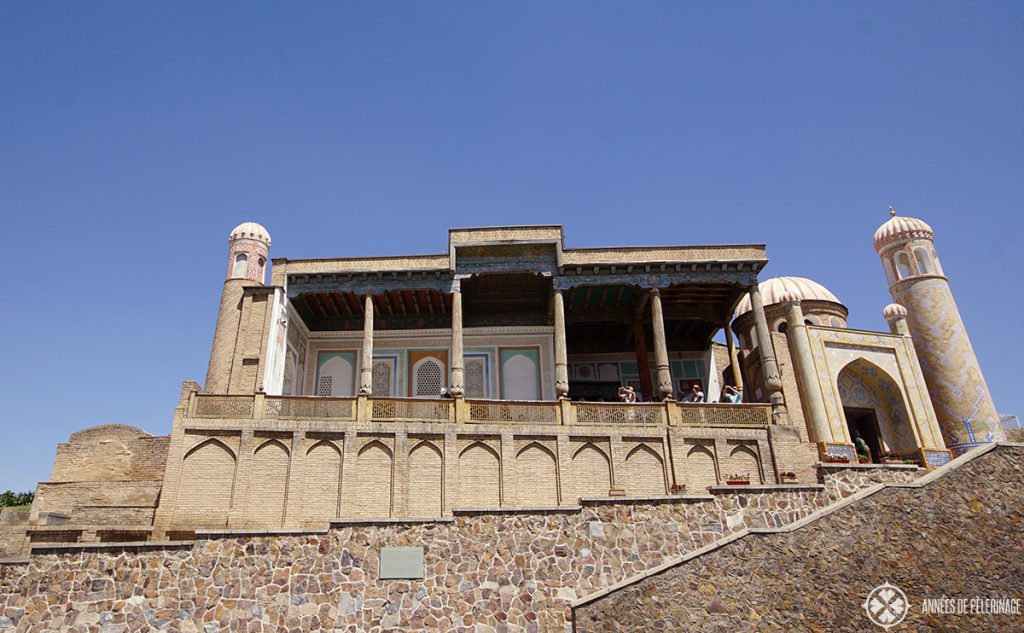 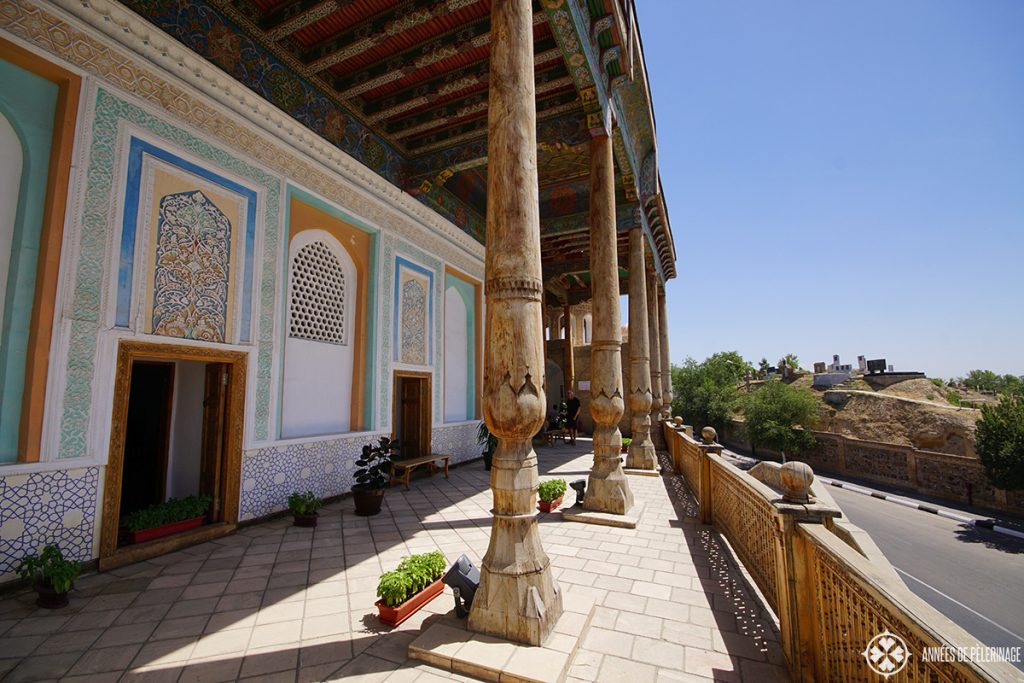 This mosque won’t appear on many lists of things to do in Samarkand. In a way, it is nothing all that spectacular, save for its elevated spot granting a wonderful view over the city. But the mosque is insofar very significant because it has been built in the 7th century. It is thus, in fact, one of the oldest mosques in the world, and the very first that has been built in Uzbekistan, shortly after the Arabs conquered Samarkand.

_________
Looking for more input? Check out this Uzbekistan itinerary from Lost With Purpose.

Other things to do in Samarkand, Uzbekistan 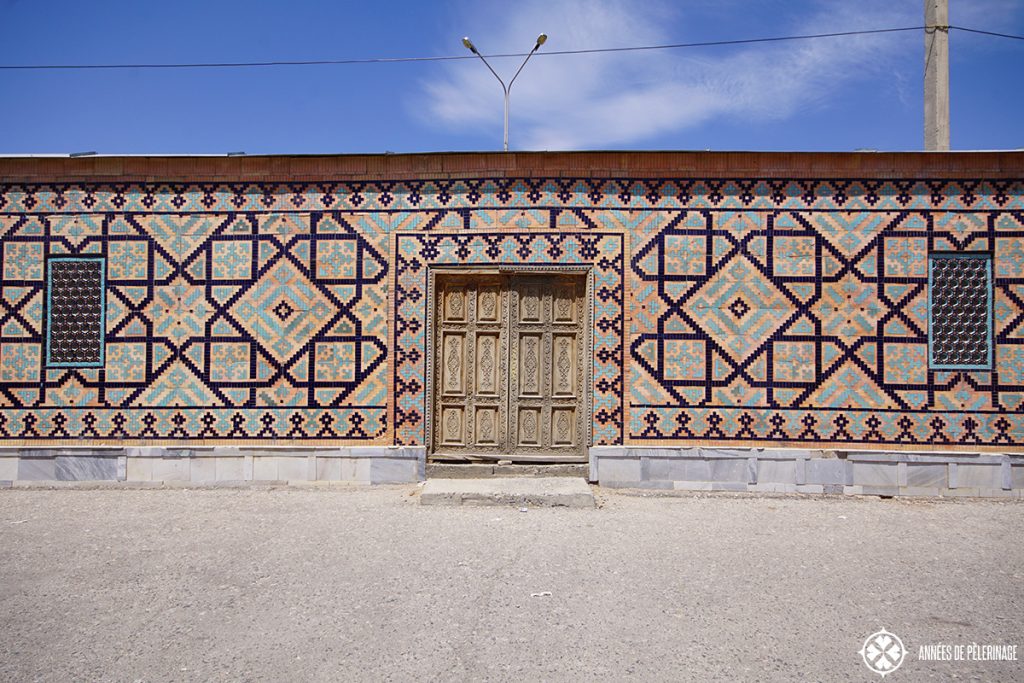 So this is my list of things to do in Samarkand. I hope I was able to convince you that this city is beautiful beyond belief and more than worth a visit. So far there are hardly any tourists there. During my stay I sometimes had the fabled UNESCO World Heritage sites all to myself. To be quite honest, this felt utterly strange.

Perhaps there are a lot of people afraid of the infamous –stan suffix. Afghanistan, Tajikistan – there are dangerous places in this region. Uzbekistan and especially Samarkand is none of them. The people are exceedingly open and friendly, everything is very inexpensive, and due to the high presence of police, the crime rate is below moderate (not counting bribery and the like, which should not concern you as a tourist).

You will have a bit of a hassle with getting a visa for Uzbekistan, but everything else will work like a charm! If you are looking for a good paperback travel guide to Uzbekistan, I can really recommend the Bradt Travel Guide! Am in frequent contact with these guys and they are really doing an amazing job.

Short as my guide is, it could obviously not cover every last bit, though it really covers the major highlights. Do take some time to explore the back alleys as well, and chat up with the locals. They are all beyond friendly and open. Expect them to ask for pictures with you, though!

Much like any other big city around the world, visiting Samarkand is possible the whole year. The arguably best time will be the summer months, as the weather will be very stable during that time and blue skies are almost guaranteed the whole time. July will be the hottest month, with temperatures sometimes rising above 40 degrees celsius.

But it will be a very dry heat that is actually quite bearable. In fact, I did visit Samarkand at the beginning of July and really had no problem. I often took a nap during the midday heat, but as I wanted to explore the fabulous city during the night time as well that was quite welcome anyway.

June or September are usually considered to be the best times to visit Samarkand, but there will also be more tourists then. But do not be afraid, Samarkand is so far off the international tourist routes that “many tourists” translates to 3 or 4 instead of none.

Where to stay in Samarkand

Samarkand is a big city and there are quite a lot of hotels. Whatever you pick, do not expect anything in the way of luxury or western standard. I personally picked the Hotel Diyora. The rooms were clean, there was a western standard bathroom (rare in Uzbekistan, trust me), and even a pool (which I never used). All things considered, the hotel was clean, the breakfast as expected and, most of all, it was more or less in walking distance of the Registan.

The Hotel Diyora is probably the best hotel in Samarkand. If you are more budget sensitive, there are a couple of other, cheaper, options available as well (click here for a list of all hotels and prices). Just try to pick something close to the center, as taxis are actually not that cheap and there can be traffic jams. 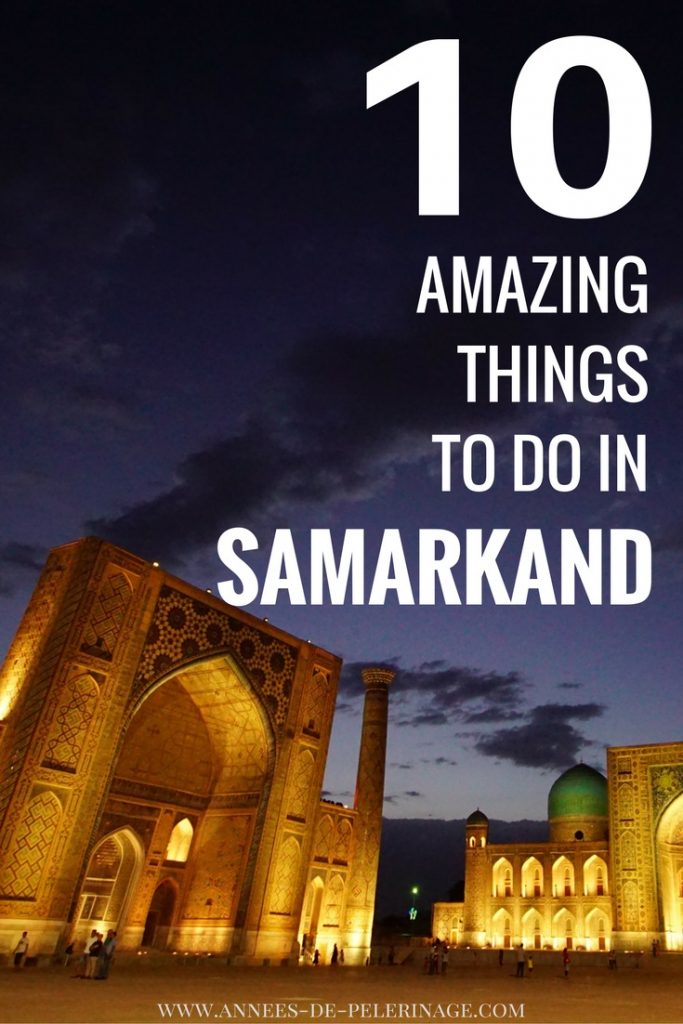 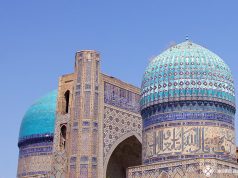 The 10 best things to do in Uzbekistan 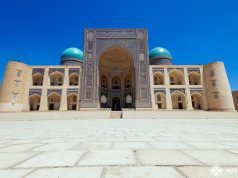 The 10 best things to do in Bukhara, Uzbekistan 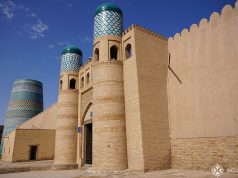