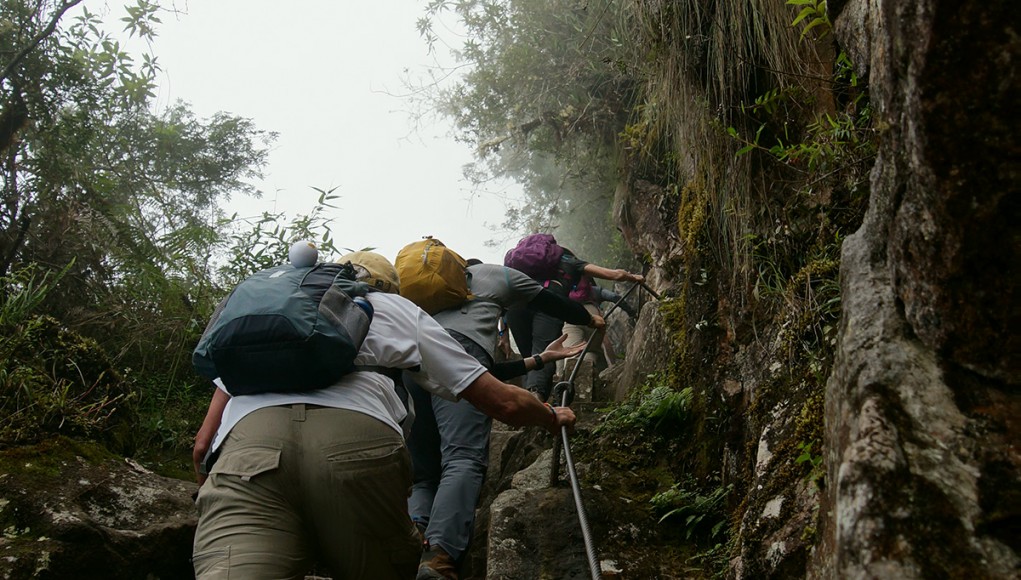 An analysis of all reported deaths and accidents of people trying to climb Huayna Picchu.

Huayna Picchu is the impressive mountain behind the near mythical Machu Picchu in Peru. Millions of people come to visit the lost city of the Incas each year but only the most experienced hikers option to see the full beauty of Machu Picchu from above (here is a comprehensive guide to Machu Picchu which explains all the wonderful sites you will be able to see). Huayna Picchu (or sometimes spelled Wayna Picchu) is often named one of the most dangerous hikes on this planet, and ubiquitous are the reports of people having died climbing the imposing mountain. But is the Huayna Picchu death toll real or just an urban myth? Here is my analysis:
_____________________
Still looking for the perfect accommodation. Here is my list of the best hotels in Machu Picchu I have faced other travelers confronting me with these rumors during my stays in Machu Picchu. I have read some references to possible deaths in guide books and I have heard some rumors directly from the rangers. Above all it left me quite..shall we say worried before my first planned hike to the summit of Huayna Picchu (read all the details how I braved the stairs of death here ). Here is a video for you to get a good feeling of what i am talking about.

If you love grizzly details, I also wrote a little article about the Dark Side of Machu Picchu, I am sure you will find entertaining. 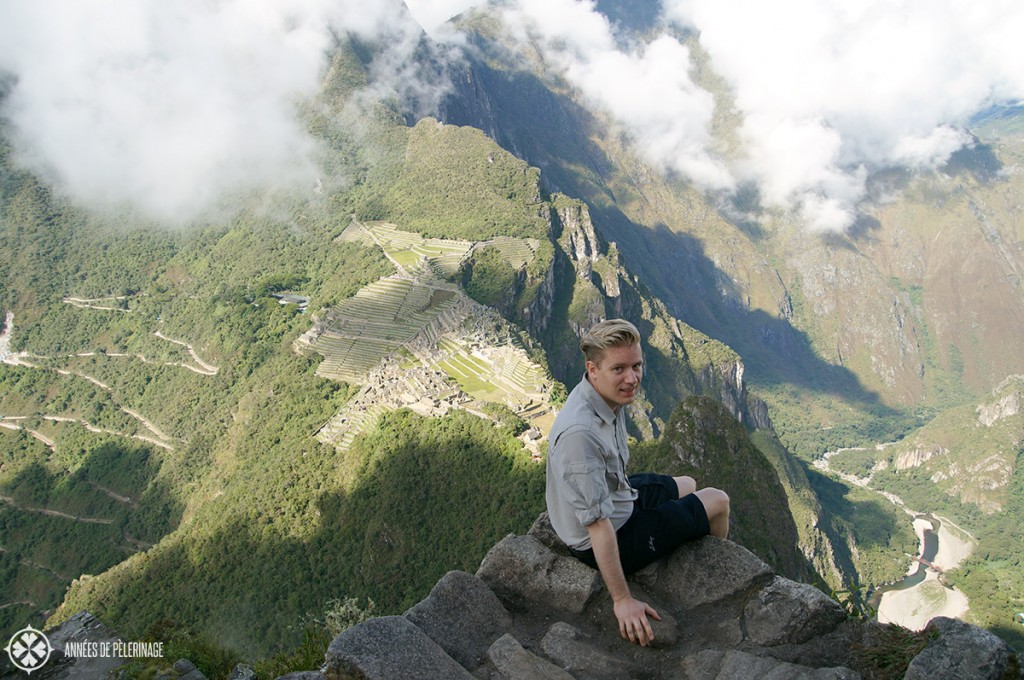 Sadly I could not find a single source with any authority or comprehensive research to answer all those worrying questions I was asking myself before making the decision whether I should or should not climb Huayna Picchu. Personally speaking, I love facts and hate rumors. Which is why I really enjoyed reading  Turn Right at Machu Picchu: Rediscovering the Lost City One Step at a Time! That book is just marvelous.

Either way, I really felt obliged to close the gap or at least uh..die trying (sorry for the bad pun, I just couldn’t resist). 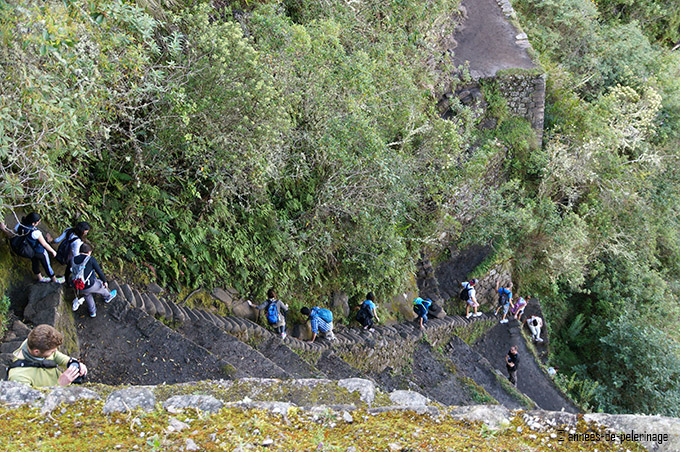 The spoiler ahead: People have died in Macchu Picchu and on the Inca trail, but I could only find 2 confirmed deaths for climbing Huayna Picchu. That’s a fact and I will share some official sources below. But with a tourist hotspot seeing a million visitors each year, the chances are statistically very high for people to die – none of these reasons would necessarily have to be related to the site itself. It also remains a fact that the hike upon Huayna Picchu IS scary and dangerous as hell.

It also might be possible that not all deaths are fully disclosed, and reports in Peruvian media are discouraged. Naturally, not all sources are available in English, so I will not be able to give a full answer either way (In case you got more information, feel free to contact me and I shall add your details below!).

Quick facts about Huayna Picchu & the stairs of death

The most important fact maybe: Every tourist has to register before he or she starts the climb and will have to report back to an official after the climb. These lists are getting checked each day for missing people. There are also some rangers scattered throughout the climb, but not as many as in Machu Picchu proper. These are there to prevent accidents (and will keep an eye on the ruins as well). I want to be honest with you: If Huayna Picchu was located in Germany, the hike would have been closed decades ago. Not because of the death toll, but rather because it is so very unsafe. There are dangerous hikes in the Alps as well, but these hikes are not attracting 400 more or less suitable travelers looking for their perfect selfie each day. That being said, I found almost no media coverage of deaths in Huayna Picchu. I mostly found some for Machu Picchu in general. Here is the list: 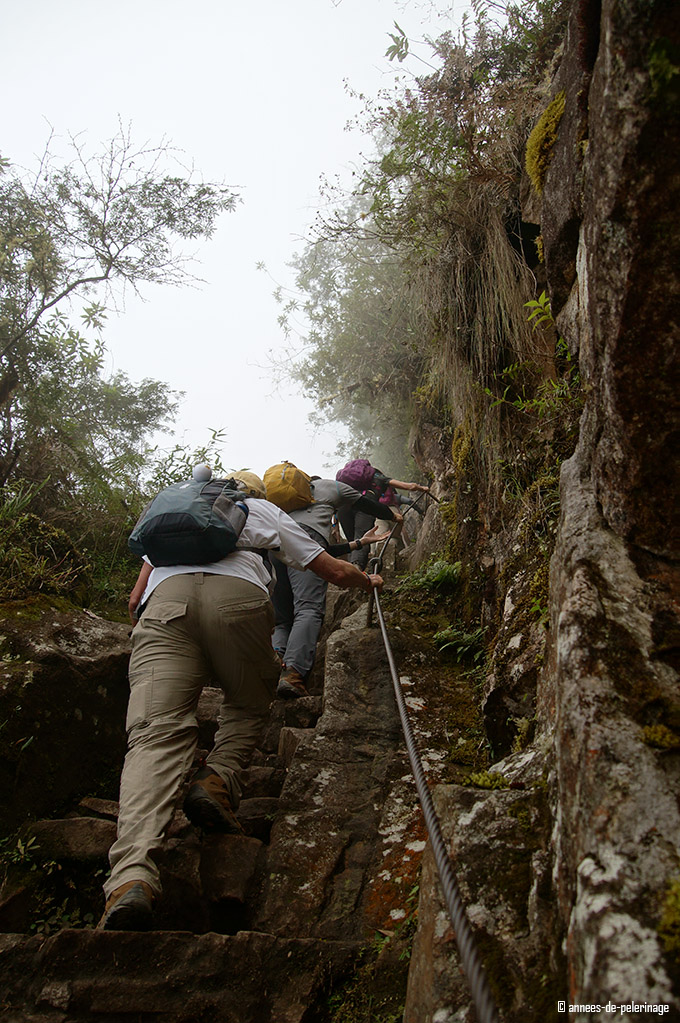 Researching for this blog post I found an incredible amount of other blog posts and newspaper articles about Machu Picchu and Huayna Picchu. The pictures and depths of information sometimes left me speechless. But I also found a lot of casual information without sources. I am not sure what to do with these. I am sure the respective authors believed them to be true, but I am quite unsure whether anyone planning hiking Huayna Picchu should value them all too much. Here is my myth list:

I found some more sites and details, more or less regurgitating the same information, so I did not bother to mention them a second time. None of them were authority sites or newspapers anyway.

Still, I want to include a thought experiment. Let’s assume 20 people have died climbing Huayna Picchu in the last 10 years. With 400 people climbing the mountain 9 months a year that would result in a calculated chance of 0,00002 percent among all climbers. The traffic-related death rate per inhabitant in the US is almost hundred fold higher. 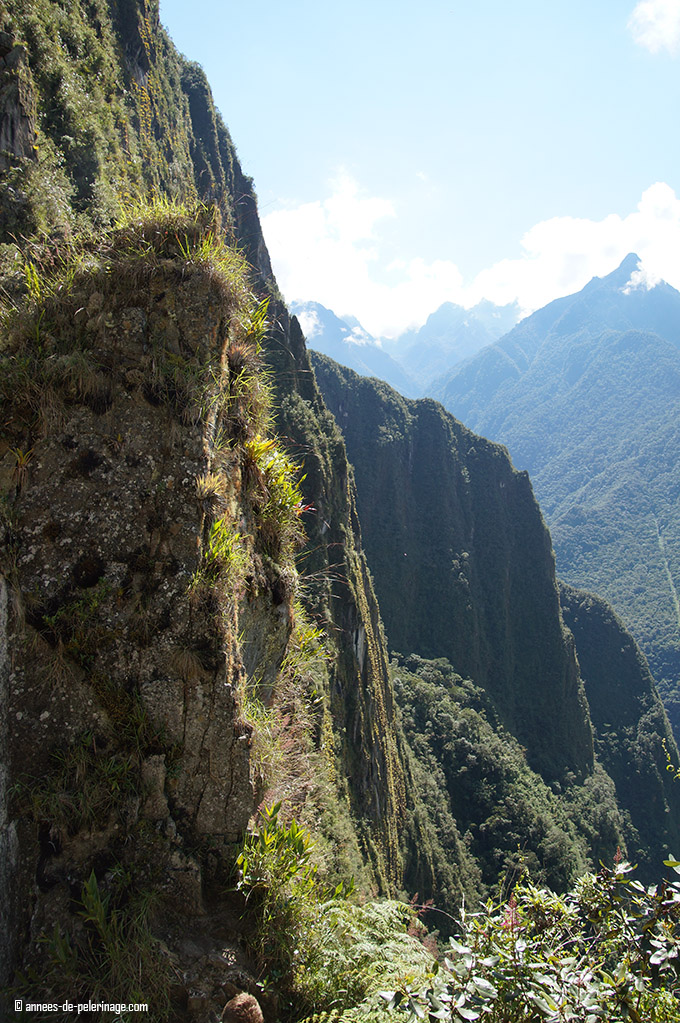 So what can I say: I did experience the so-called stairs of deaths and I really have to admit: It was scary. One misstep would have you tumbling down a couple of hundred meters. I have also seen people with bad shoes and equipment. Some people were also clearly not in a physical adequate shape to master this hike.

But I also grew up in the German Alps and I am very aware that any mountain is to be approached with respect. During the summer months of my childhood, it was a rare day we did not see the rescue helicopter flying around the area. Accidents, can, will and do happen – especially after sudden changes of the weather. Huayna Picchu is and cannot be any different. So if you are a fit and experienced hiker, Huayna Picchu will be a challenge, but one that you can master.

If you suffer from vertigo or got an unsure footing, it is very much recommended to skip this part of Machu Picchu. You can have a wonderful view of Machu Picchu from the Gate of the Sun – without that hazardous hike.

As for the reports about people dying climbing Huayna Picchu: Well clearly people have died in Machu Picchu. People also die climbing Mount Everest, the Kilimanjaro or a ladder to change that light bulb in the living room. If you are scared of these things, it is best to stay at home. But it is also quite impossible to see the world without facing some risks. I have been traveling the world for more than 30 years. Thanks to a lot of luck and some common sense I never had any serious accidents, never experienced any thefts or lost luggage, and never really regretted visiting any country. So there you have it: The world is no safe haven and Wayna Picchu is no exceptions. There is a risk attached to enjoying the beautiful view, but if you prepare well enough, you will be able to handle it.

I believe that Huayna Picchu is one of the very few places in the world, where inexperienced hikers are faced in a very direct way with the dangers of high mountains and hiking. I believe that and not actual facts, led to a lot of myth making. But again, do not underestimate this hike.

Oh and before you go, here are some more articles I wrote about Macchu Picchu.

Last, but not least a disclaimer: I do not claim to have any insider information on deaths or accidents on Wayna Picchu nor did I witness any accidents first hand. I merely compiled a list of official and unofficial sources to clear up some facts about the Huayna Picchu death toll. 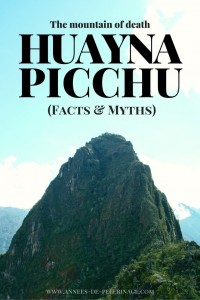