Home Travel guides Jūnihitoe – an experience with the most expensive kimono 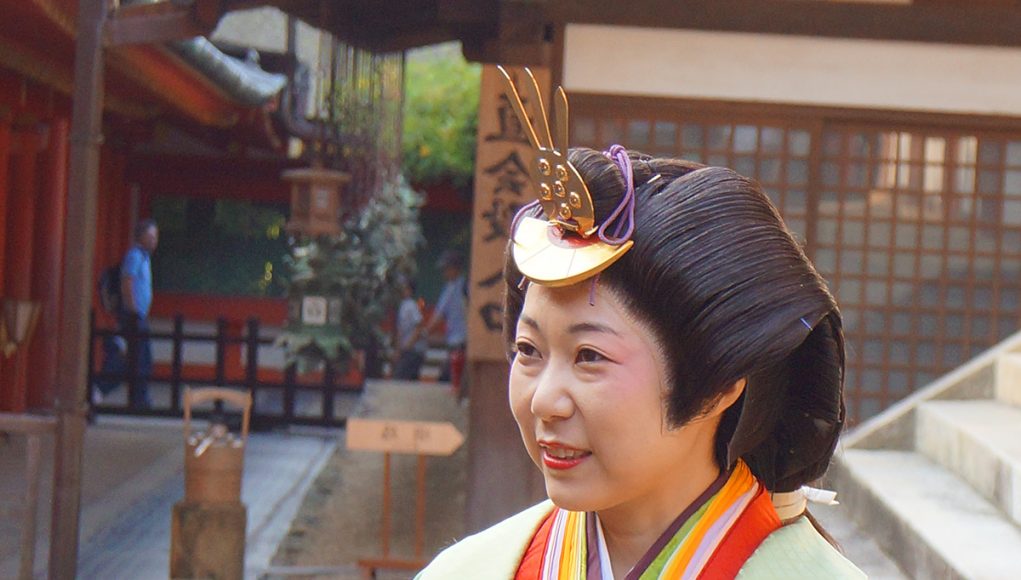 Watching a spectacular wedding ceremony at Kasuga Taisha Shrine in Kyoto with a woman wearing a Jūnihitoe.

There are those few moments in a traveler’s life when he or she gets lucky beyond measure. Those rare moments where you chance upon an outstanding experience, without ever having planned for it. My visit to Kasuga Taisha Shrine in Nara proofed to be one of them. There I saw a woman elegantly wearing a Jūnihitoe. A Japanese dress so ancient, it remained virtually unchanged for more than thousand years, and at the same time so expensive it beggars comprehension.

I guess you don’t need to be a fashion addict to be blown away by that experience. But if you are a true fan of Japan and its history (like me), the whole the experience gets raised onto another level. For me, it really was something I would never even have dared to wish seeing in my life. I returned to Japan many a times (which made me compile this sample itinerary for your conveince), but haven’t shared such a moment ever again.

Catching my first glimpse of the Jūnihitoe 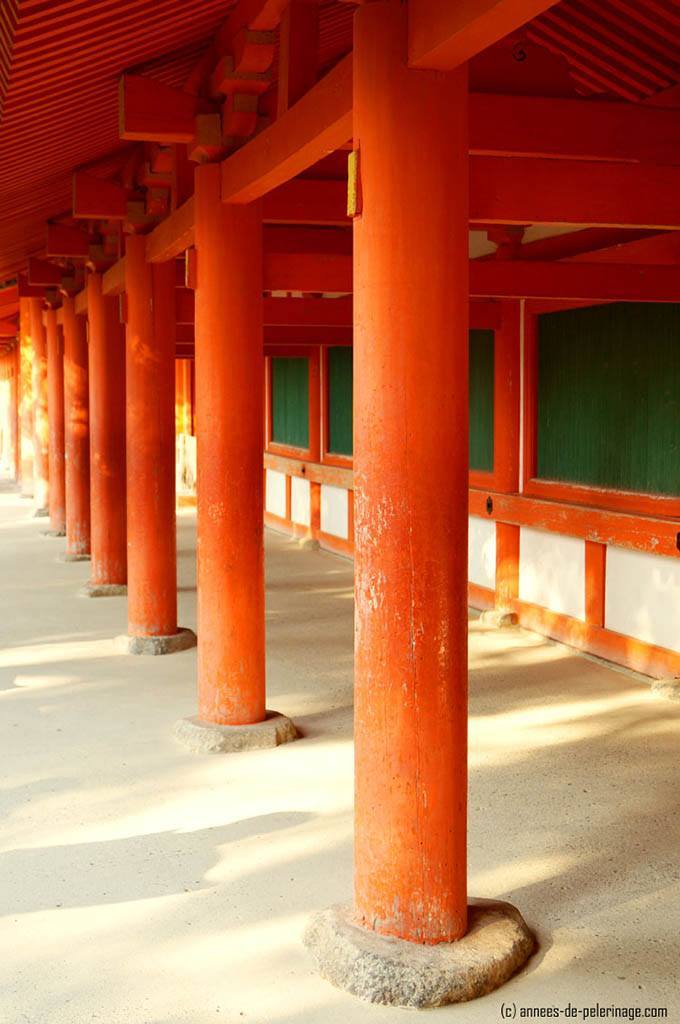 Two years back I was climbing the hill to Kasuga Taisha Shrine in Nara: Lanterns, deer and moss everywhere which finally gave away to a vermillion haze of red corridors. Despite its serene beauty, I really did not expect to see anything outstanding within the actual shrine building. The 10.000 lanterns were the real reason I stopped by at Kasuga Taisha. You see, Kyoto alone has 17 UNESCO World Heritage sites (click to read my guide on things to do in Kyoto) and I have seen them all and Nara has a couple of more. You very easily get what I would call the shrine-sickness.

So I entered the sacred grounds looking here and there, taking a couple of pictures (more out of professional need than anything else). A wishing well, some ema and a scattered few Japanese offering their casual prayers to the gods and spirits. That particular day had been very long. I’ve already been at the Horuji Temple and the Todaiji – all in a couple of hours. My feet and eyes were tired, and my mind suffering from an overflow of outstanding visuals.

And suddenly there, when I was just about to head back to the hotel, I saw through the lofty perforations of a gate a colorful procession of exquisitely dressed Japanese. Heading it all, much to my utter disbelieve, was a woman wearing a kimono of a sheer endless mass of layered silks. A Jūnihitoe! My mind instantly started rattling through the possibilities. Why, I silently asked myself, was a woman wearing the courtly robes of a noble woman from Japan’s ancient past? This garment hasn’t been fashionable for more than 1.000 years!

Right next to the lady in the Jūnihitoe was, much to my delight, a man dressed in the same ancient fashion. Not having a ready answer, I approached. No door was blocking my way, and nobody seemed to mind the lens of my camera documenting the outstanding situation.

The solemn procession then came to a halt and it was picture time. There was an official photographer in the entourage. He made the vibrant couple in their weighty robes pose for the perfect picture. Shuffling them hither and thither, while another attendant fixed the Jūnihitoe and arranged the priceless garments in a way it wouldn’t get dirty. The merry goings-on also gave me the chance to satisfy my photographic needs!

The whole ceremony took more than 20 minutes before the attendant finally helped the lady gathering up the many layers of her Jūnihitoe and in a matter of seconds, they all vanished into some outbuilding of the shrine. It left me happy, yet pondering what I just experienced. To be honest I don’t have the perfect explanation. I can only guess, and guessing will be what I shall share with you next:

Trying to explain the Jūnihitoe experience

Kasuga-Taisha originally was the royal shrine of the Fujiwara clan. This clan held, throughout history, very close ties to the imperial family. In fact, most consorts and empresses hailed from this family. So my guess is that I happened onto a wedding ceremony from a young couple of the wider circle of the Fujiwara clan. At least it would explain why she was wearing a Jūnihitoe – a garment normally reserved for the highest of highest state functions of the Empress and her attendants. I am not entirely sure anyone else in Japan would be able to hold any kind of ceremony at a prominent Shinto Shrine like Kasuga-Taisha wearing these clothes without at least some ancestry. This, however, is another educated guess.

It would also explain why the rest of the procession was so well dressed as well. Black-tie for the men and formal kimono for the women isn’t something the average Japanese wears every day – let alone can afford. It would also explain the official photographer documenting everything.

But really I could be dead wrong. So if anyone got a guess – make sure to enlighten me! I’m quite positive this was not an actor. I am equally positive that this was a genuine event and certainly not a tourist being dressed up in a cheap costume. Speculations aside, the fact remains that this was an outstanding experience from the rarefied inner circle of Japanese customs. One I will probably never forget.

Read my story about the secret world of geisha parties, if you want to learn more about another part of Japan’s unique culture that is usually off limits for strangers.

Now probably not everyone studied Japan science like me. So here are a few words on the Jūnihitoe at the end. Jūnihitoe (十二単衣) literally translates to twelve-layer robe and that’s just what it is: It is a kimono that has 12 layers all in all. This tremendously complicated kimono was worn by Japanese court nobles starting from around the 10th century. Even today it is still worn by the Japanese Empress on her wedding and a very few other highly formal occasions. All layers of a Jūnihitoe are pure silk, though you will only be able to see the exquisite pattern of each layer at the hem. Needless to say, these garments are prohibitively expensive and more than just rare. They are also extremely heavy. Fully dressed (counting in the under-robe and the coat covering it all up) a Jūnihitoe can weigh up to 20 kilograms!

It has to be said, though, that in ancient times the layered garment served, in fact, a quite practical use. Formal court architecture in Japan was, and to some degree still is, not very energy efficient – to say the least. In fact, old palaces didn’t even have real outer walls but were wide open to all sides. Indoor tents, folding screens and blinds provided the means for adjusting for the ups and down of Japanese weather. Just like that a court lady could shed or add layers to her Jūnihitoe. This is why the actual dress is called Itsutsu-ginu-touching (meaning little cloak over robes and a divided skirt), sometimes also referred to as Karaginu Mo – Chinese coat over a split apron-like skirt. So to be precise the Jūnihitoe is only the final, most elaborate form of this kind of dress. It is little wonder, that this really is the most expensive Kimono of them all.

Where to see a Jūnihitoe

Now I’ve been a bad, bad person by showing you all these pictures, without telling you where and how to see it yourself. But to tell you the truth: Seeing your own Jūnihitoe will be very hard, if not impossible. Your best bet would be at the enthronement ceremony of the next emperor where his wife will, in all likelihood wear a Jūnihitoe. Now I wish Emperor Akihito (actually properly addressed as Tennō Heika in Japan) a long life because your chances to be present at the ceremony are lower than nil anyway! Other than that there are a couple of festivals held out through Japan where historic dresses like the Jūnihitoe are used for the parades. One example would be the Saiō Matsuri in the Meiwa where costumes from the Heian period are showcased. Among them will be, with a high likelihood, a Jūnihitoe.

This, however, will not be the real deal – but you can only expect so much from a garment that probably costs more than the average family home in its authentic state. Way more popular than Saiō Matsuri (and probably on our tour through Japan anyway) is the Aoi Matsuri in Kyoto. This grand festival is held in May and also features a procession of people dressed in historic costumes.

Last but not least there is a costume rental service in Kyoto called the Heian Costume Experience Studio. If you want to wear a high-end Jūnihitoe they will quote a price of roughly 2.000 euros (280.000 Yen) for the full experience – and that only includes getting dressed and taking a few pictures! Given the fact that for a real Jūnihitoe all twelve layers will be hand-woven and embroidered, you will understand the exorbitant fee.

There is, however, some good news at the end. Kyoto’s famous geisha also wear elaborate kimonos. Read my guide on Geisha hunting in Kyoto to tremendously increase your chances of actually seeing one!

And as a special candy for those who want to see some moving pictures of the Jūnihitoe – here are is the video I filmed:

So that’s it. That’s all I can tell you about my personal Jūnihitoe-experience in Japan. Have you seen a Jūnihitoe yet? What do you think about this kind of garment? Let me know it the comment section below!