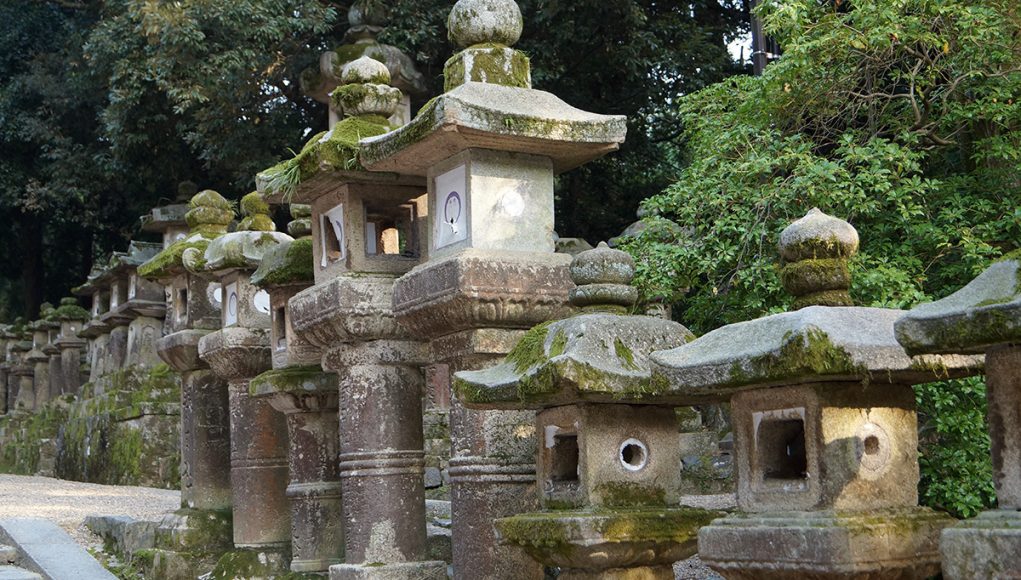 Kasuga-Taisha is Nara’s most celebrated Shinto Shrine. What to expect and how to visit this UNESCO World Heritage site from 768 AD.

High up on the hills above Nara lies a truly magical place. It somewhat reminds you of a Studio Ghibli movie – only this one is real! This is not your average temple, with a bit of incense and some luck charms to be bought. The Kasuga Grand Shrine (春日大社 Kasuga-Taisha) is one of the most celebrated and famous Shinto Shrines in Japan, probably only rivaled by Fushimi Inari Shrine in Kyoto and Ise Jingu. Here is my travel guide for tourists to Japan.

Before we start, do check out my detailed Japan itinerary, as Nara is an important stop on the road! And also visit my blog about the 10 best temples in Nara for some further inspiration.

Close to the spiritual world at Kasuga Taisha

The approach to Kasuga-Taisha leads through a truly primordial forest covering the hillside of Nara’s mountain range in verdant greens. The wide gravel paths are lined with thousands upon thousands of stone lanterns and are part of the Nara Park. Those lanterns have been donated by devotees as a token of faith.

In ages past, when Nara still was the capital of Japan, they are said to have been lit every night, but nowadays this custom sadly has stopped. Lanterns will be lit only on a few shrine festivals throughout the year (see below). Unfortunately, I haven’t had the chance to see that yet, but it must indeed be an awe-inspiring sight!

Lit or not, take your time walking the slight incline up the hill and breathe in the magical atmosphere of this unique UNESCO World Heritage site. Depending on which source you check, there are said to be roughly 3.000 stone lanterns in Kasuga-Taisha. It’s close to incomprehensible how much there are. After 5 minutes or so you will think something along the line: “Okay, so I guess the shrine will be around the next bend, we must have seen thousands of those lanterns already!”.

But no! The lantern-lined path goes on and on. Ever so often you will see one of the wild deer rushing through the shrubbery or even coming closer begging for fodder. Nara truly is amazing (do read my guide to the 10 must-see highlights, by the way!).

The path will finally lead you to the inner sanctuary and oldest part of Kasuga-Taisha. The whole shrine is painted in a bright red with green accents. A small entrance fee is asked which is well worth it. While outside all lanterns are fashioned from stone, the ones inside are cast in bronze. Some of them are even covered with gold leaf. The main buildings date back to 768 AD. However, the actual structure is less than 200 years old.

Why is that so? In ancient times Japanese Shinto shrines used to be rebuilt every 20 years. In some shrines, this tradition is kept alive to this date (e.g. in the Ise Grand Shrine). What sounds like a horrifying custom to us westerners, is to Japanese actually a healthy renewal of spirituality (and architecture & craft traditions). There is also a great fear that old things will gather evil spirits. But no matter!

The shrine hasn’t been rebuilt ever since the end of the Edo Period. The current building dates back to 1863. The only things that are being renewed every two decades these days are the roofs. The cedar chips would otherwise eventually rot and make the roofs leak (Note: The Grand Ise Shrine is still being rebuilt every 20 years).

But back to the building: the Kasuga Shrine is the family shrine of the Fujiwara clan. A lot of emperors married daughters from this clan, and throughout Japanese feudal history, that clan wielded a huge amount of political influence through its very subtle intermarriage policy. I recommend you to walk around all the buildings and watch the pilgrims go on about their business.

If you want to participate – observe them closely and emulate them as best as you can if you want to enhance the spiritual experience for yourself. It might feel awkward at the start, but go along anyway! (But obviously, try not to disturb anyone and remember this is an active shrine and not primarily a tourist attraction.)

If you got the time, you should make a short detour to the right side of the hill. There is a little path leading further uphill, and along its way (maybe 100 meters or so) you will find a little stall with thousands of heart-shaped ema. Here is where lovers, and those who want to be loved, will hand in their secret (or rather not so secret since you could read them all) wishes. Quite the sight – if a bit cheesy.

Around the grounds, you will also find the Kasuga Taisha Museum. In my personal experience, those treasure houses are very, very seldom worth the visit. Most of them will feel a bit outdated and the relics on display are usually far away from première qualité. The Kasuga-Taisha Museum is an exception to this rule as it has been only recently rebuilt and renovated. Still, if you really want to see some special Japanese treasure go to one of the big museums located close to the entrance of Nara Park, like the Nara National Museum.

There is also a botanical garden near the Kasuga Shrine. Its theme is the Man’yōshū (which is Japans oldest collection of poems dating back to roughly 500 AD) and you will find mostly plants and flowers mentioned in those books. If you are not very intimate with Japanese literature traditions, this will be somewhat boring. The garden is famous for the Kasuga Taisha wisteria though. So if you are in Nara in April, make sure to drop by since the sight will be amazing. Otherwise, I’d have to say that there are way more interesting gardens to see in Japan – actually in Nara itself.

Rather end your sightseeing tour through the Kasuga Shrine walking the path to the north and stay high up on the hill. This will eventually lead you to the Todaiji Nigatusdo temple (maybe a walk of 20 minutes). While the temple itself is quite impressive itself, the walkway so high up the hill will give you an excellent view over Nara Park – especially on the giant Tōdai-Ji temple. A view you do not want to miss.

The mountain behind Kasuga Taisha is called Kasugayama and is home to one of Japan’s most beautiful forest. The Kasugayama Primeval Forest is actually part of the UNESCO World Heritage site that compromises Kasuga Taisha. If you got enough time, you should definitely check out the many tranquil pathways, where only a few tourists can be seen. Instead, you will be more or less one with ancient Japanese nature. Truly awesome, especially as a lot of the native Sika deer are roaming freely around.

When to visit Kasuga Shrine

In my opinion, it really doesn’t matter which time of the year you visit Nara – this city will be beautiful throughout the year. Cherry blossom time and autumn are the most crowded times of the year. There are, however, three auspicious dates you might mark in your calendar concerning Kasuga Taisha. Here are the dates for the festivals (Matsuri) when the lanterns in the shrine will be lit at night:

If you are lucky you might see a wedding taking place there as well. When I was there the last time, I was probably lucky beyond measure (even today I still can’t believe my luck!) There was some sort of service for a family dressed very, very elegantly going on. Among them was a young couple dressed like court nobles from the Heian era with the woman wearing an authentic jūnihitoe (十二単?).

Can you believe that? She actually had three dress maidens along, which helped her lift the priceless garment high up in the air whenever she moved an inch as to not get it soiled. I can only assume those must have been members of the Fujiwara family or something (if anyone knows what this could have been – make sure to tell me in the comments below!). Anyway – what a sight!!!! I wrote a little article about the whole Jūnihitoe experience here.

Entering the general grounds of Kasuga Taisha is for free. If you want to see the inner sanctum, you will have to pay 500 yen. The adjacent botanical garden will be another 500 Yen and the treasure house 400 Yen per person. All tickets will be for sale directly at the entrance of each attraction and normally you will have no problem getting in.

Like most shrines in Japan Kasuga-Taisha is opened throughout the year with no closing days.

How to get to Kasuga-Taisha

Nara’s temples are more or less all located in the foothills of the mountain range in the east. Kasuga-Taisha is no exception to this rule. The whole area is known as Nara Park and you will find the shrine with the thousand lanterns at the very end of the Park. Starting from Nara-Station this will actually be quite a long walk of 50 minutes. I recommend you to go for this option. First of all, there are many other attractions located on the way (like Kofuku-ji or Nara National Museum).

Then the park itself is a true beauty and you will see a lot of wild, but very trusting deer on your way (they will actually feed on your hand!). If for whatever reason you can’t walk the way (which is paved all the way to Kasuga-Taisha) you can take the city bus and get off at Kasuga Taisha Honden station. Usually, there is a lot of traffic in the city – so don’t expect to be that much faster.

If you take the bus, however, get yourself a day-ticket since it will be much cheaper. Be warned though that the way up to Kasuga-Taisha gets a tiny bit steeper on the last meters. There will be some stone steps and I am not entirely sure the approach is suitable for handicapped people (or wheelchairs/buggies).

I recommend you to take a map of Nara at the tourist information before you go there, mark down all the things you want to see and then prepare a good and efficient route. Walking will be your best option to see everything, but you should avoid passing the same attraction twice since you will be short on time!

If you are planning to visit Nara on a day trip from Kyoto or Osaka (especially if you got a Japan Rail Pass), my day trip guide will help you to organize your trip efficiently.

Thus ends my little guide to Kasuga-Taisha in Nara. If you liked my review of this magical Shinto shrine make sure to leave a comment down below and share your views!