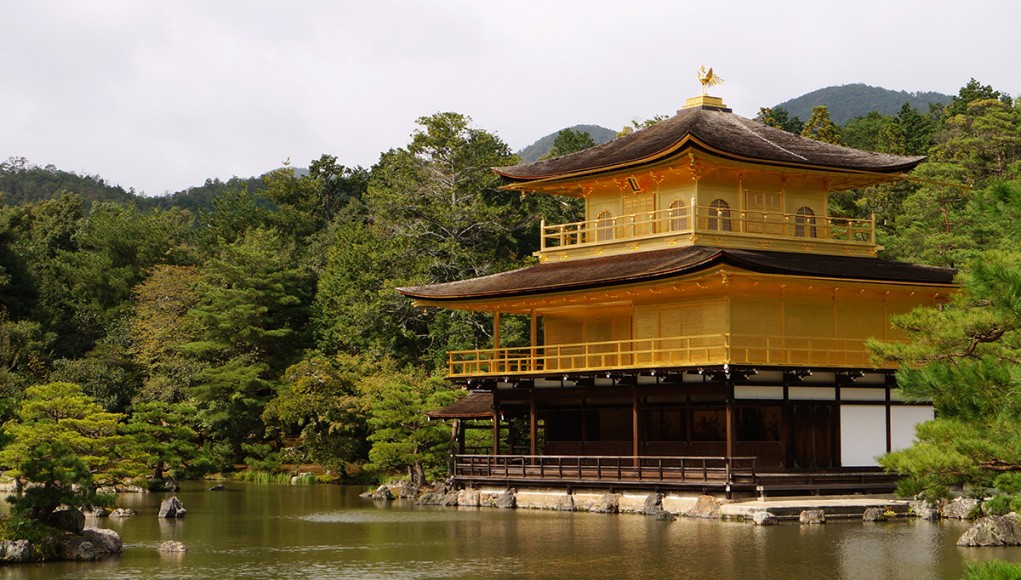 We mark the year 1397 when the Japanese Shogun Ashikaga Yoshimitsu decided to build a private country retreat. Meanwhile, the imperial throne is split into various fractions – all but helpless before the united will of the now ruling Samurai. Yoshimitsu’s golden vision, known today as Kinkaku-ji, effortlessly attest his absolute power.

But did the Shogun know that, then and there, he would set the foundation for one of the most photographed tourist hotspots on earth? Probably not – even though he probably would have enjoyed the thought. Join me on my tour through this amazing UNESCO World Heritage site!
_______
Looking for other highlights in Kyoto? Read my post about 20 amazing things to do in Kyoto

For Yoshimitsu, the Kinkaku-ji (金閣寺) was nothing but a sanctuary to live out his retirement – away from the many demands of the court. It was his will, however, that demanded the villa be turned into a Zen temple upon his death.

The ambiguity of its origin might explain why it is commonly referred to as the “Golden Pavilion” when in fact, something like Golden Temple Pavilion would be a more literal translation. Know then that Kinkaku-ji is, in reality, a Zen Buddhist temple run by a sect called Rinzai. The official name of the temple is hence not Golden Pavilion but Rukuon-ji (鹿苑寺) – the Deer Garden Temple.

And maybe it would have been a smart move to stick to this name: Kinkaku-ji is more than just golden roofs and doors – despite what most casual visitors to Japan might expect. It is peacefully nestled inside a carefully laid-out landscape garden to the northwest of Kyoto.

The close proximity can be explained by the fact that Kyoto served as Japan’s Capital from 794 until 1868! Yoshimitsu, after all, did not want to die far away from all that he had achieved during his reign.

So what makes Kinkaku-Ji so special? Apart from the obvious golden décor and its hybrid state between a villa and a temple, it is also a mixture of different styles. The lowest floor, easily identified by its bright white plaster walls, quotes stylistic elements from palaces dating back to the Heian Period. The austerity below forms a pleasing contrast with the rest of the structure – as if to ground it to reality.

Still, Kinkaku-ji remains ever so elusive – regular tourists are not allowed to go inside the Golden Pavilion. Yet a keen eye will be able to spot statues of Yoshimitsu and Shaka Buddha resting before a gilded background through the open sliding doors on the first floor. Hôsuiin, temple of Dharma Water, is the official name of this first floor.

The second tier then called Chôondô – the Tower of Sound Waves, represents the style of Japanese samurai residences. It is the first floor to be totally covered in gold leaf. The eyes ever darting onwards, will then find the third floor.

It is interesting to note that Shogun Yoshimitsu may have dreamed of a golden villa, but only managed to coat the ceiling of this last floor with gold during his life – the rest remained in its original wooden state. The rounded windows of the upper floor resemble the style of a Buddha hall within a Zen temple. This richest of all floors is known as the Kukkyôchô – the Superb Apex.

As for interesting details: A golden phoenix can be seen sitting on top and a black golden panel with Japanese writing below the upper roof. Underneath are enshrined 25 Bodhisattvas and an Amida triad. You may find it interesting to know that Kinkaku-ji is not only priced because of its marvelous architecture but also because it houses relics of Buddha. It is, what the Japanese will call a shariden (舎利殿) – a reliquary hall.

Sadly little else of Yoshimitsu sprawling villa, excepting the Golden Pavilion, survived throughout the ages. Given its wooden core, it may not come as a surprise that the site burned down more than a couple of times.

The last time is particularly tragic and famous: In 1950 a fanatical monk intentionally set the whole structure on fire, wanting to commit suicide in the hills behind the temple afterward. While he succeeded with the first, his latter attempt failed. Later investigations would find out that he was suffering from the persecution complex and schizophrenia.

The Kinkaku-ji you can visit these days has been rebuilt by 1955 – earlier pictures, prints, and stories make it doubtful that the temple had been covered with gold leaf in such an extensive way before. Ginkaku-ji (the silver temple, which also stands in Kyoto), by comparison, utterly lacks the ostentatious part of its name-giving attributes.

So is the Golden Pavilion all but a fantasy of too eager reconstruction efforts? Certainly not! The Kitayama culture was known for its splendor – even though large parts of the population suffered severely. Riots and Famine were more than common while the ruling class lived in abundance.

But let that fact not unsettle you. Take in the Golden Pavilion for what it is – a surreal feat of architecture that almost gives the impression of not belonging to this world. The way the golden hall rests on his little island seems like a quote from paradise, at least to me.

The gardens and outbuildings of Kinkaku-ji

A bit more worldly, however, are the rest of the Kinkakgu-ji-grounds. Passing the Pavilion you will be ushered past the former living quarters of the head priest. Unfortunately, this part of the site is also off-limits for visitors. You can all but guess the austere beauty within – at least judging from the exquisite garden surrounding it.

Near Kinkaku-ji there is also a little teahouse, called Sekkaitei. Once this structure must have invited visitors to contemplate their golden vision; drinking a faintly steaming cup of matcha. Now it is just another museum piece.

The only part of Kinkaku-ji that still seems in use is the Fudo Hall. This small temple stands close to the exit and houses a small statue of Fudo Myoo. While not a particularly noteworthy site of adoration I have seen a couple of Japanese ringing its bell through the hemp rope and offering their prayers – money tossing and incent burning included.

And talking about coins: Scattered around the garden of Kinkaku-ji are various little weather-worn statutes. People stop here and throw coins, asking for good luck and fortune. Personally, I’ve always found the adoration through money a bit blasphemous, but there is no denying that the custom permeates humanity. Is there a need to add a little pan to receive the coins of a particular skillful thrower? The Japanese quite obviously answered this question with a yes.

Like most temples and shrines in Kyoto, you have to pay a small entrance fee to enter Kinkakuji:

The good news: Kinkaku-JI is open every day of the year. The bad news: It closes quite early, but that’s probably no big news if you have been traveling around Japan a bit.

Here is one last cheesy picture and a profound thought at the end of this travel guide: The Golden Pavilion has, to some degree, become an industry. Among the 17 UNESCO World Heritage sites in the city of Kyoto, it is by far the most visited tourist attraction. I’ve never seen a calendar or a postcard collection doing without the motif, and certainly, Instagram, Facebook and a couple of odd-million private picture books are filled with selfies featuring the Golden Pavilion.

I found it fitting to add mine at the end of this article. My official excuse: It was the only picture I had of the barriers around the walkways and buildings. Together with the thousands of other visitors you do at times feel a bit like cattle.

What do you think of Kinkaku-Ji? Marvelous or too pretentious? Share your thoughts below!