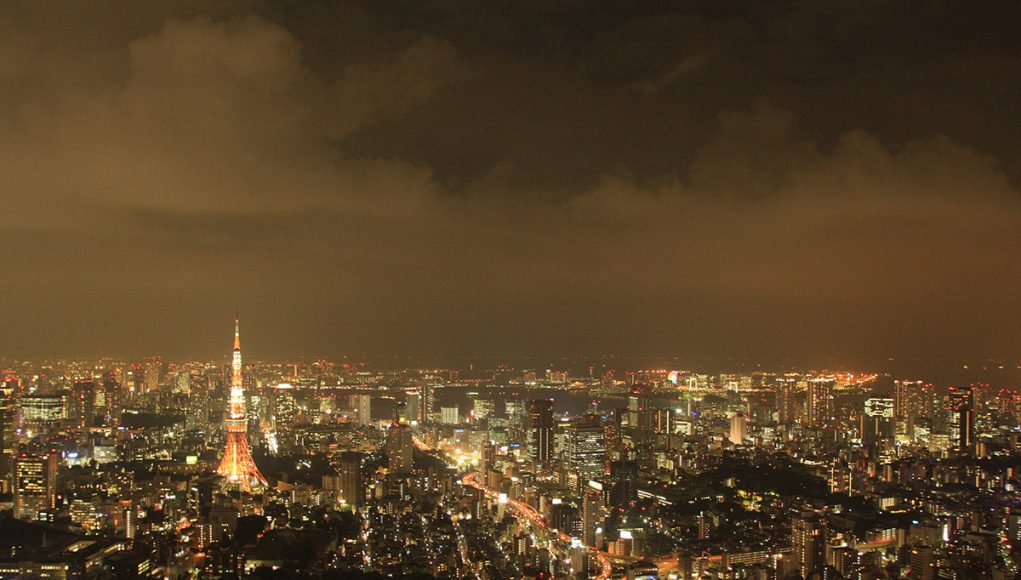 The Mori Tower in the Roppongi Hills Complex offers the best view of the heart of Tokyo.

You will see skyscrapers of 20 or more stories that are barely 3 meters wide and 4 long. Gasoline stations will attach their gasoline pumps to the ceiling to save the space on the ground. Of course, there are also a looot of things to see in Tokyo!

As a tourist, you should not miss the opportunity to take in this architectural efficiency in its entirety from above. I recommend you to do that from atop the Mori Towers in the Roppongi Hills Complex! No other spot in the city will give you a better vantage point and I featured it in my Japan itinerary!
______________
Planning a visit to Tokyo? Check out my other articles to have the time of your life:
How to get tickets for Sumo Wrestling in Tokyo
All you need to know about visiting the biggest fish market in the world

Why Roppongi Hills and not the Tokyo Sky Tree? 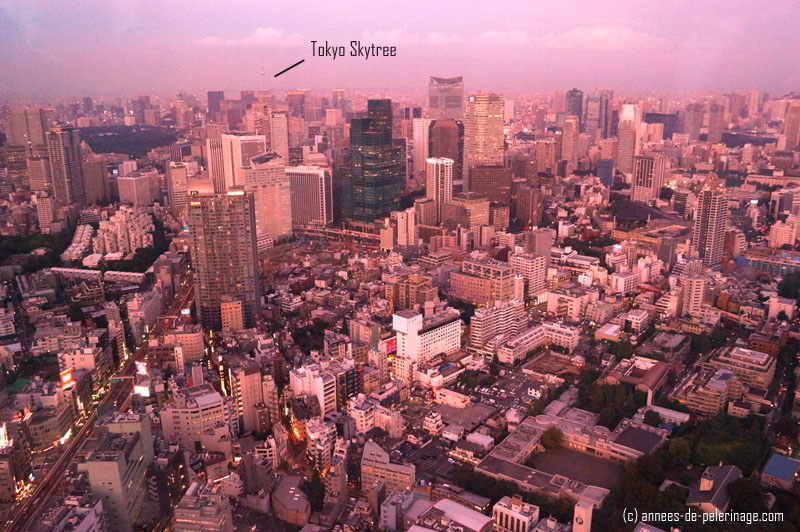 Okay, now most tourist guides will tell you to go to the Tokyo Skytree. With a height of 634 meters it certainly is the tallest building in Tokyo. In fact, it used to be the tallest building in the world until the Burj Khalifa in Dubai was finished. But a quick look at the map will show you that the Skytree is actually quite far outside! So far outside you can barely see it through the thick smog so common in Tokyo.

The Ginza is roughly 6.5 kilometers away, the Tokyo Tower almost 10! Now no matter how big your telephoto lens is – you won’t be able to take a good shot of those iconic sights. Even on a good day, that will be too far away. And those are rare (if not totally nonexistent) since Tokyo’s skyline constantly hides behind a veil of smog. If you really want to take a glimpse of Avalo…excuse me Tokyo… do go to the Mori Tower in Roppongi! Trust me!

What to expect on top of the Mori Tower 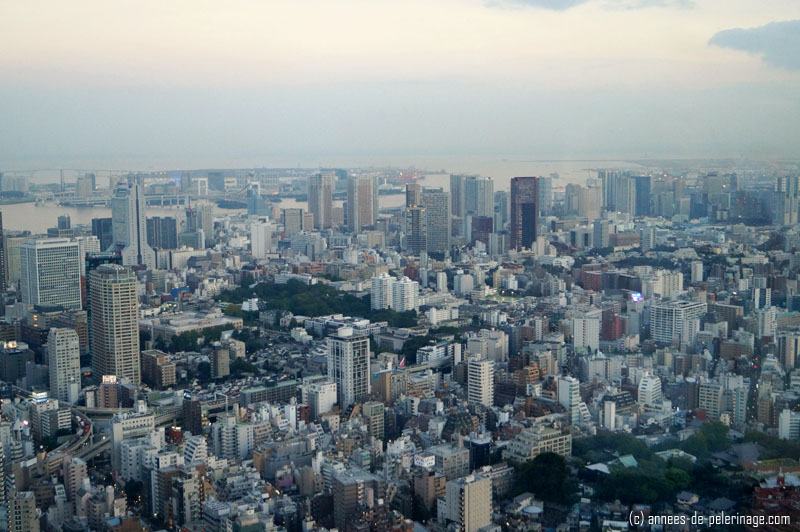 The Mori Tower is part of the Roppongi Hills Complex. It is roughly 240 meters high, which makes it the fifth tallest building in the city. Now certainly, the Roppongi Ward isn’t exactly in the city’s center either. But with a distance of roughly 2 kilometers to Tokyo Tower, it offers a good view of the skyline in the heart of the city, on the imperial palace and the harbor.

The viewpoint atop Mori tower is actually part of a museum (so if you are asking for directions – you are looking for the Mori Arts Center). So as an additional bonus to the breathtaking view of the city you can walk through one of the best art collection in town. Sweet, eh?

Now you will want to get to the 52nd floor of the tower. This is where a huge window gallery is located spanning all around the whole floor. There are a few cafés and a restaurant on this floor as well (none noteworthy other than for their spectacular view). Nevertheless, you should get yourself a snack and just enjoy the scenery a while. It appears to be a very popular spot for young lovers as well, especially at sunset – not only for the people of Roppongi Hills! 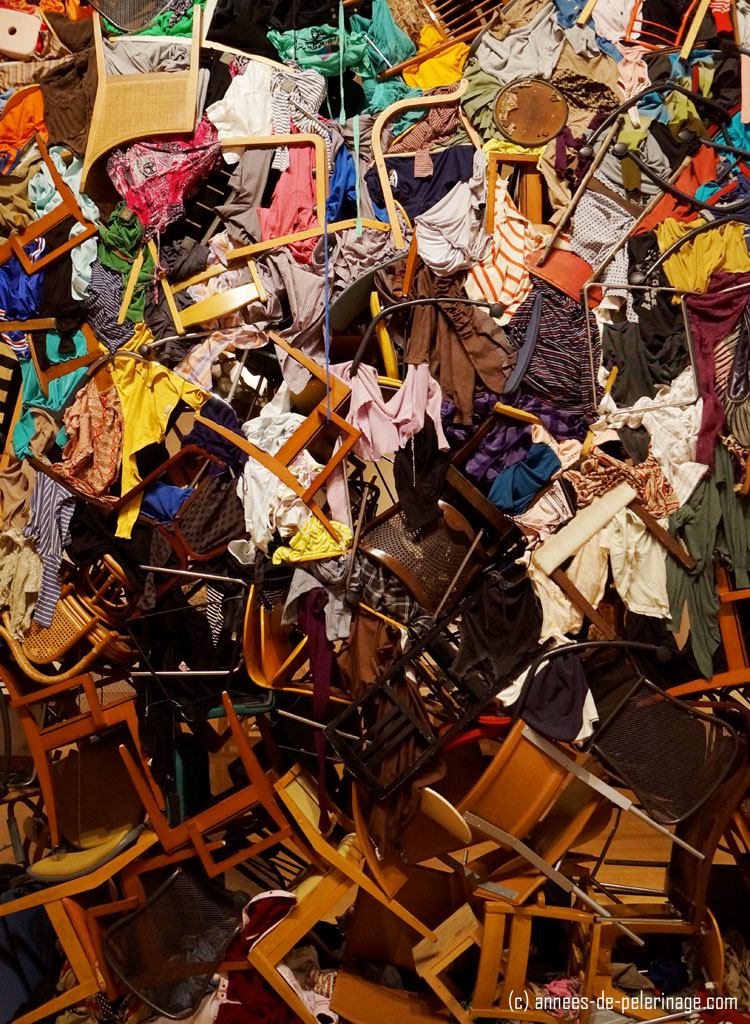 Now don’t ask me why the museum (which obviously doesn’t have any windows so the art works are not exposed to unfiltered natural light) is located one floor above – but whatever. If you are not into contemporary art you might consider skipping this. There will be video installation there will be very queer stuff from Japanese artists.

I personally enjoyed it a lot – especially so, since I didn’t recognize half the artists and it’s always a good thing to expand your horizon. (Sorry for not offering more pictures on that topic – but out of obvious reasons taking them wasn’t allowed in all rooms). 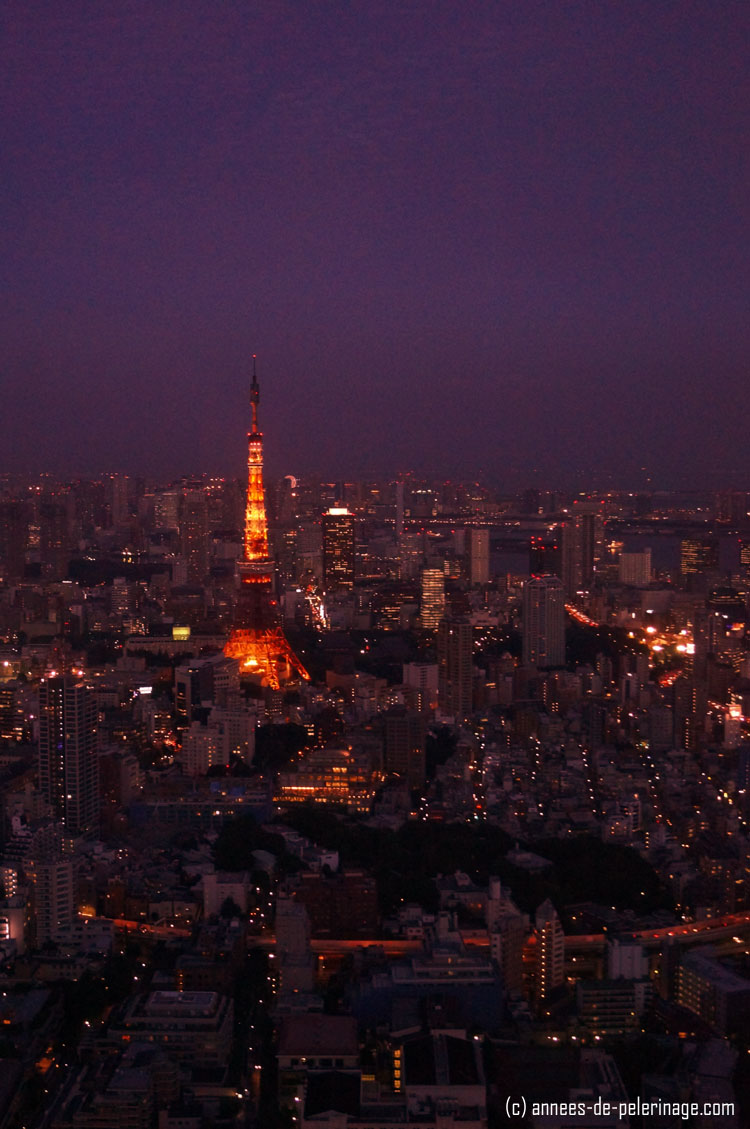 One floor above the art center, which would be the 54th floor, you will be able to actually go outside. This is called the “Sky Deck” and will need an extra ticket. You won’t be able to get as close to the edge as down in the window gallery. There will be a huge barrier and tight security measures to prevent anyone from taking that extra step – accidently or intentionally.

As for taking pictures: Well down below you will have a window in front of your lens and up above you will need to clip away parts of the building. Also, not all angles are accessible on top since parts of the building reaching yet higher obstruct the view on the sides. The smog will make you curse in anger everywhere, though ;-)

If money is no consideration then I would recommend you to go. Experiencing the height and the city directly (rather than safely from behind a security glass) will really add another lasting impression to your tour through Tokyo.

On your way out make sure to walk through the Roppongi Hills shopping mall on the ground floor of the Mori Tower. While it certainly isn’t Harajuku, it might be still worth a visit for a fashion enthusiast. Talking about Harajuku: It’s actually not that far away. So you could visit the Meiji Shrine at Harajuku Station (read my guide here) before and then finish the day at Roppongi hills.

Tickets for the Mori Tower 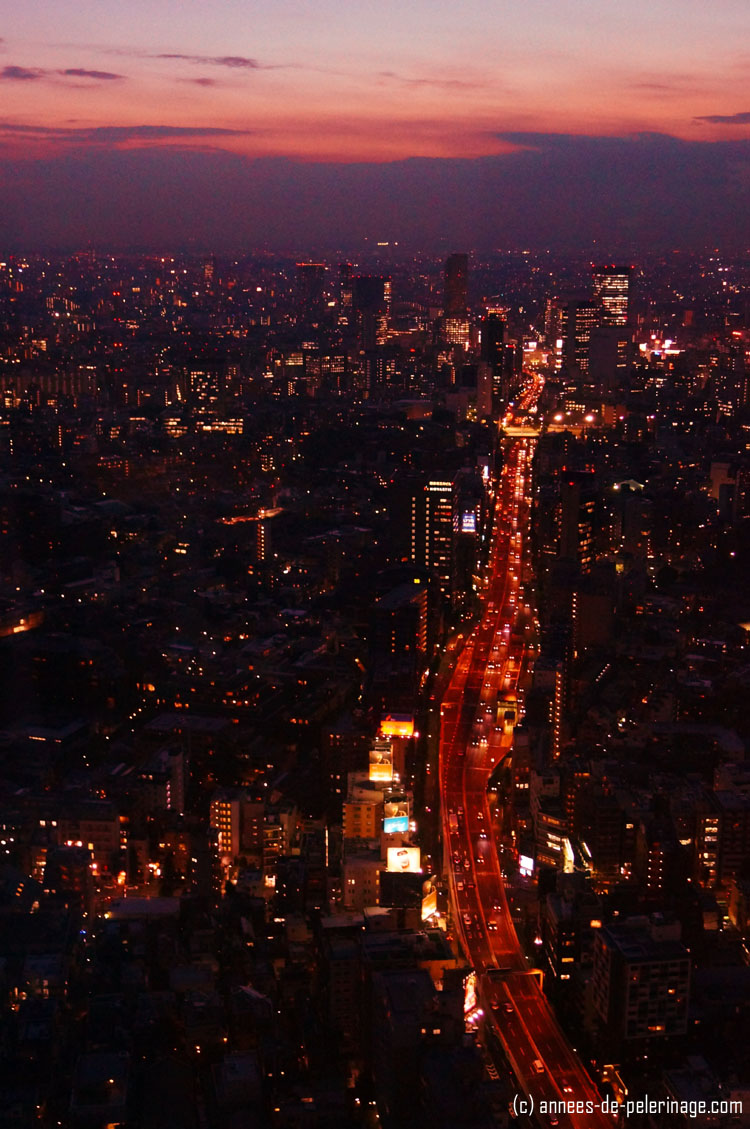 Like I said you will need to buy additional Tickets for the Sky Deck to get on the very top of the Mori Tower – they go for 500 Yen.

As for buying those tickets, you will have two options: The most convenient way probably is purchasing them directly at the Mori Tower. The ticket office can be accessed on the side of the actual Building and is located on the third floor. Now since I had problems finding it on my first time, I’ll visualize this for you:

Standing in front of the main entrance you will see a little tower (maybe 5 stories high or so) connected via a bridge to the main tower. This is where you will have to go to buy the tickets. It called the “Museum Cone”. In Japanese it’s written like that ミュージアム コーン. If you are taking the subway it will be on your left once you exit the escalator to the surface.

Now: If you are smart you will buy your tickets for the Mori Tower in advance. This will safe you 300 Yen per person. You can do that in any convenience store or at Ticket Pia counters. This is actually a very helpful tip for all travelers in Japan in general.

Remember that basically all tickets (no matter if it’s special exhibitions or pop concerts) can be bought at the vending machines in convenience stores (Lawson, Seven-Eleven, Ministop, etc). However, it will only work through those vending machines and basic Japanese will be needed to work your way through the process (I found this guide on the internet that might help you along).

If you don’t – well you can always hope for a friendly Japanese who knows how to speak English to help you along. The friendly part will probably be no problem – but in my experience very few actually speak English. (Then again I am fluent in Japanese so maybe you might ask someone else regarding this matter). 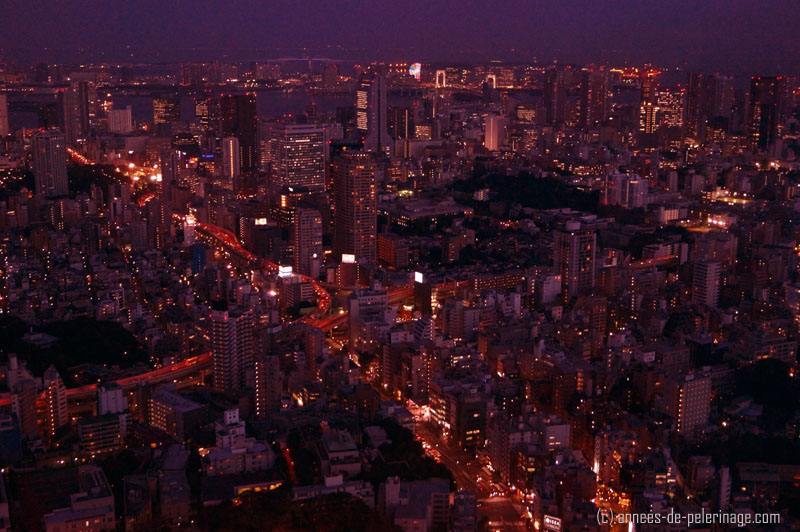 The observation deck on top of Mori tower is opened all year long. It will open at 10 am and close at 11 pm. On Fridays and Saturdays, it will be opened two hours longer (so until 1 am). The opening hours for the Sky deck differ, though. If you want to get outside as well you will have to come no earlier than 11 am and no later than 7:30 pm (when the last admission will be).

Personally, I recommend you to go roughly 1 hour before sunset (or on a very short notice when the sky happens to be crystal clear and the sun is shining). This will give you the opportunity to see both sides of Tokyo – day and night. Remember that you can stroll through the Mori Art Museum to pass some time and then come back later. I’m not sure if they are regularly re-admitting visitors, but speaking from my own experience it worked out for me.

How to get to Mori Tower, Roppongi Hills

Obviously, you will need to get to the Roppongi Hills area. If you check the official access-guide on the website of Roppongi Hills (they don’t allow for a deep link so please click on the “access”-tab) they will give you a couple of options. Except you can’t avoid it (because you don’t want to get another subway ticket or you already got a JR-Ticket), don’t get out anywhere else than at Roppongi Station on the Hibiya Line.

The Hibiya line is marked as gray on the maps and will bring you directly to the main entrance. Seriously – the whole district of Roppongi Hills, with the Mori Tower at its center, can get you lost in no time. Doubly so, if you don’t speak Japanese and got no way to ask for directions. Remember that Roppongi Hills is Japan’s largest integrated property development project ever.

That was my review of Mori Tower in the Roppongi Hills complex. Have you been there already and want to share your experience? Planning to go there? Let us know in the comment section below!

Check out my other Tokyo city guides as well: 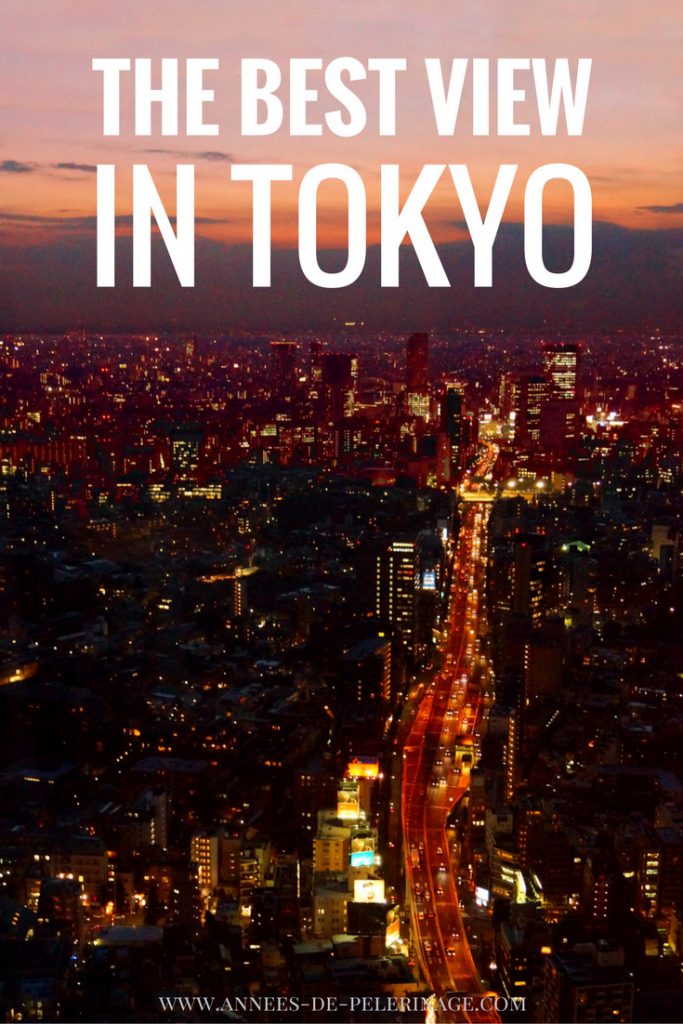