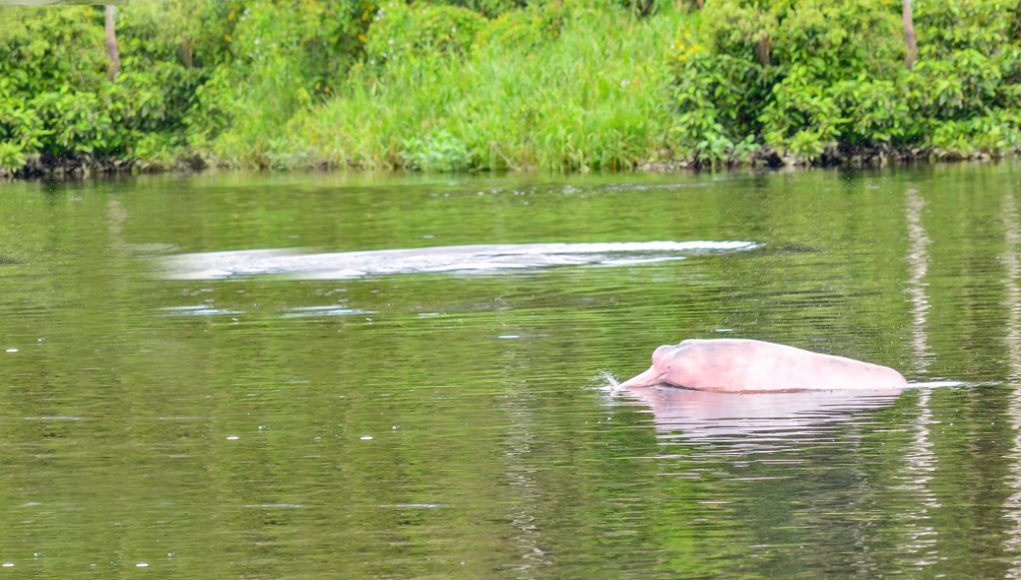 A little guide to the endangered pink dolphins of the Amazon River. Here is how I saw them in the Yasuni National Park in Ecuador.

I can’t really remember when I first read about the pink river dolphins. I still remember, though, that I thought it was some photoshoped hoax (and I guess some of the pictures out there are). But in the days of Wikipedia, it took only some seconds to find out the truth. Pink dolphins sounded like a wildlife enthusiast’s Holy Grail. So when I went to the Amazon River in Ecuador, there was no way around trying to see them. 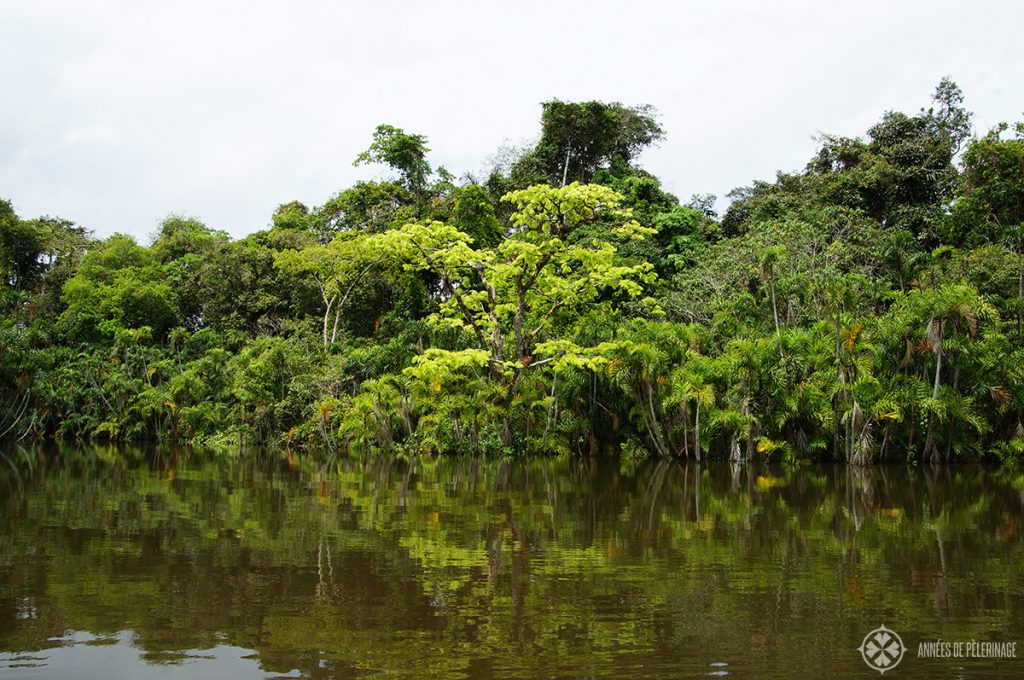 Little did I know how hard that was going to be.  I researched a lot and found very little information.  Both books and guides informed me, that the territory of the pink dolphins, or boto how they are often called, covers Ecuador. But apparently the Pañacocha Lagoon is the only place where they can be consistently spotted in the vicinity of the Yasuni National Park.

Entering the habitat of the Amazon River Dolphin 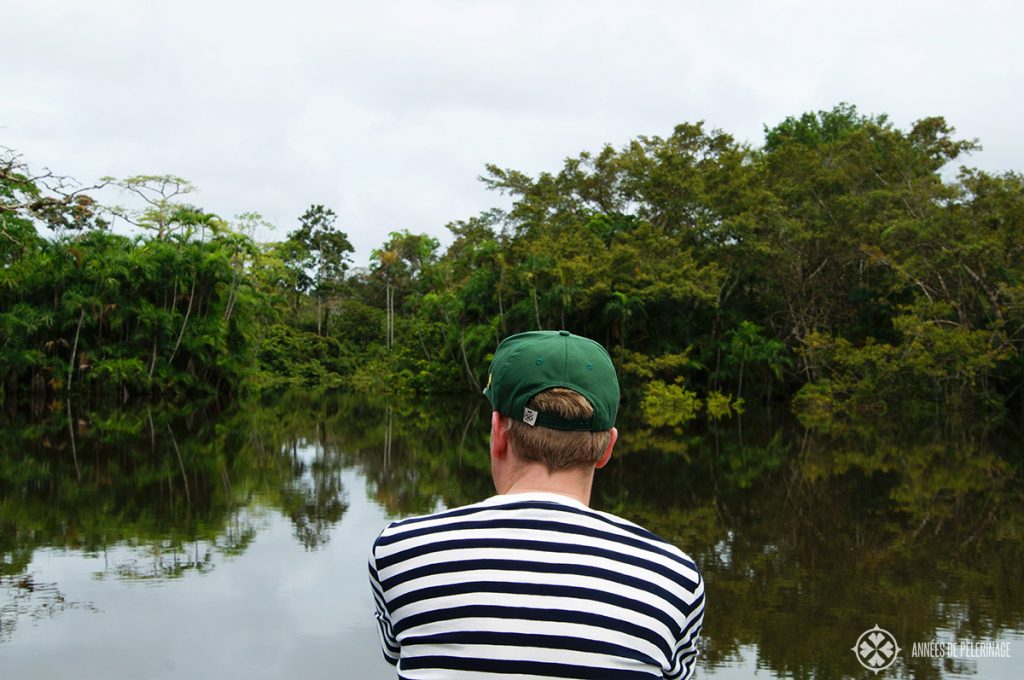 The pink amazon river dolphin has a huge territory. They can be found throughout the whole Amazon River system, both in the lower regions (so Brazil) but also in Ecuador, Peru, Bolivia and Colombia. There are two problems, though: First of all they migrate. During the dry seasons they will be occupying the main river channels, while they will retreat to the flooded plains, forests, and tributaries during the rainy season.

The second problem is related to this fact. The pink river dolphin are mostly swimming through rather muddy water. Greyish pink as they are, they are pretty much camouflaged.

This is where the Pañacocha Lagoon  comes into play. The Pañacocha Lagoon is a network of blackwater lagoons and riverines situated directly between Yasuni National Park and Cuyabeno Wildlife Resever. These extremely calm backwaters are a favorite retreat for the endangered pink dolphins. And apparently a wonderful place to spot them consistently in Ecuador. 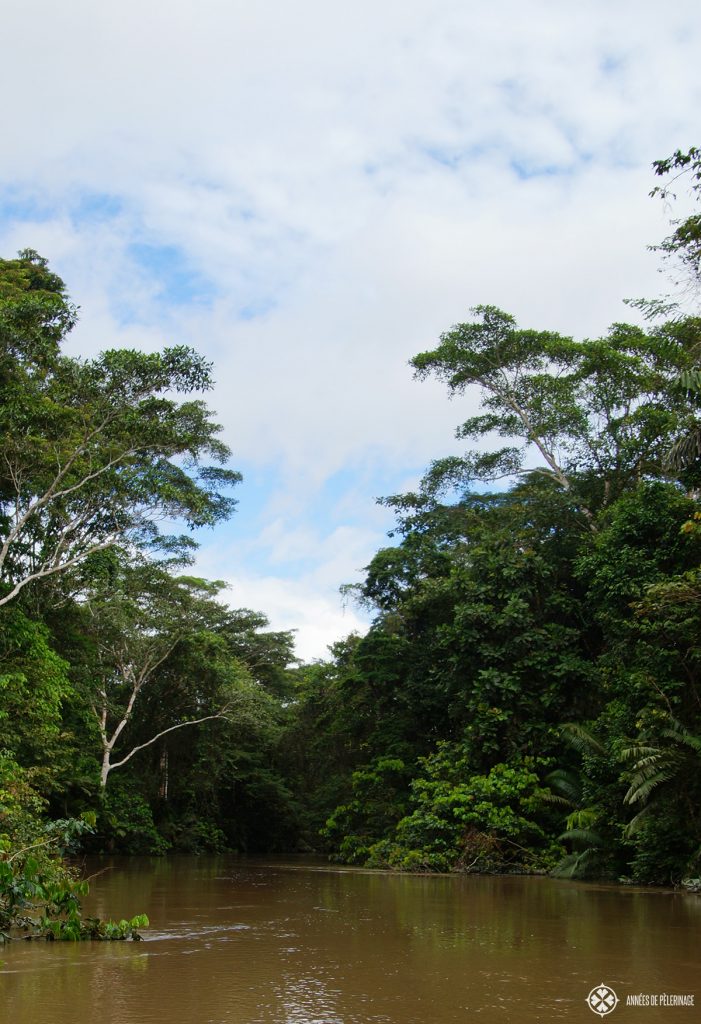 Mind you, there is no guarantee, as there is no guarantee to see even the most common of animals in the Amazon Rain forest. It’s just that chances are said to be higher in the Pañacocha Lagoon. While I personally was lucky, my guide told me that it was the 5th time he did this exact tour, but only the first time he saw them (here).

I was staying at the La Selva Lodge, which would be your ultimate luxury option for visiting the Amazon Rain forest in Ecuador. While it is a wonderful place, the Pañacocha Lagoon is some 2 hours’ drive by boat away. I was quite worried of investing so much time, because our tour operated told us that chances were slim.

Truth be told, the ride was wonderful and the whole Pañacocha Lagoon more than enchanting. Actually it turned out to be the actual highlight, right after the rare pink dolphins. I am quite positive that even without seeing them, I would have called the day spectacular

How to spot the pink river dolphins 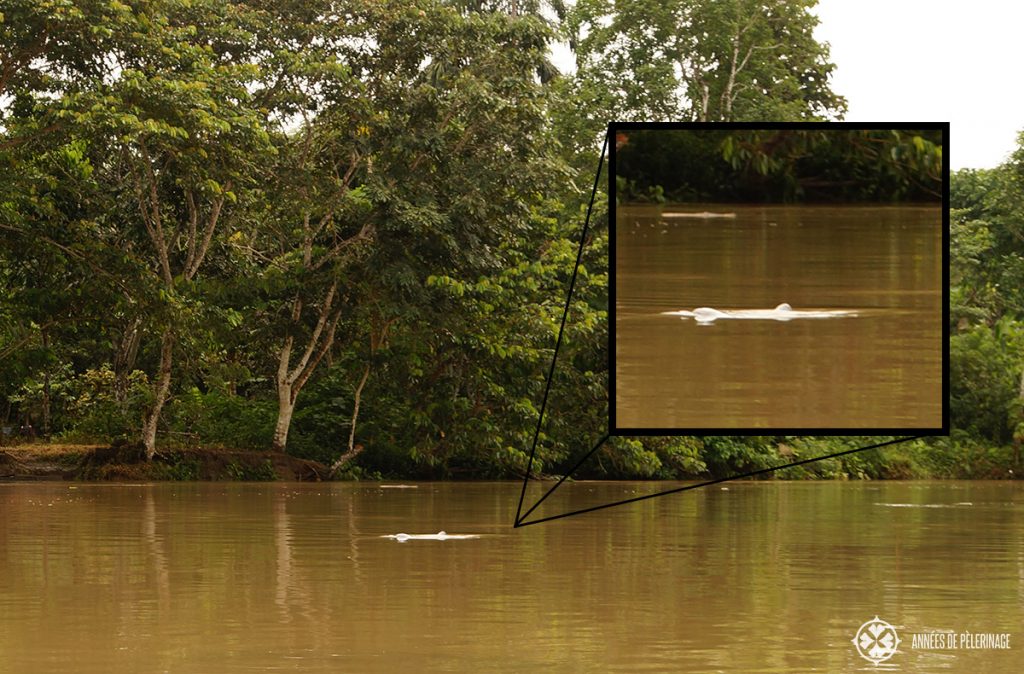 The main problem of spotting the pink dolphins lies in their behavior. They are not very sociable, so you will often find them alone or in very small groups (usually mother and child). They only surface for air every 30 seconds (roughly), while not swimming very fast (you could call it sluggish). So you will have to have a very keen eye to spot them amongst the churning waters of the Amazon River.

As we entered the Pañacocha waterways, we immediately noticed a calming of the waters. They also gradually cleared up a bit, but not all too much. From here it was being silent and observing the waters. You’ll need a very circumspect local guide to point them out – or sheer luck (probably both). 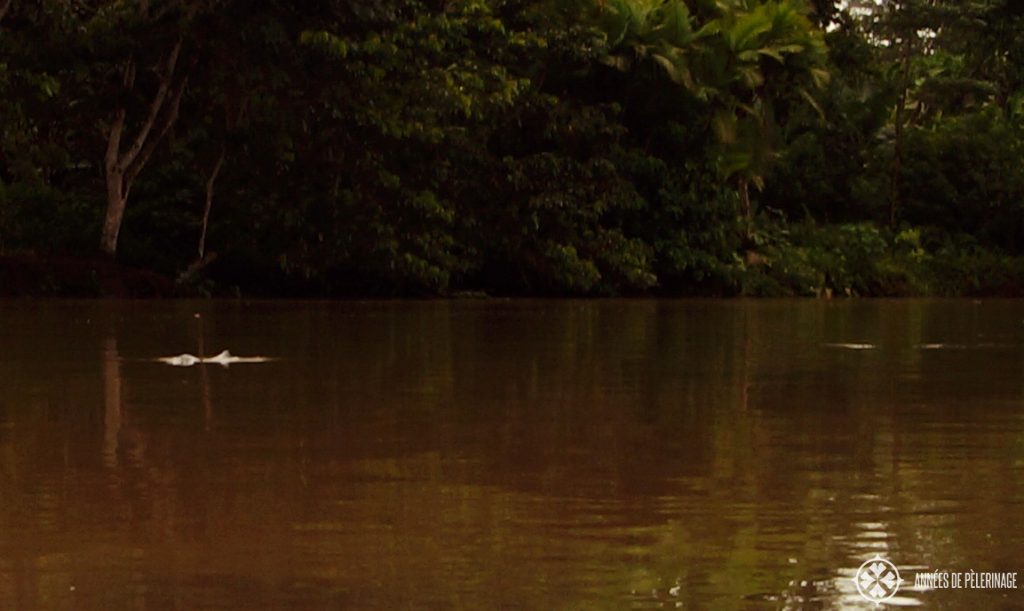 You see, the pink dolphins don’t jump out of the water. They really don’t follow the boat either (like their ocean-bound cousins).  And even when they surface, only a very tiny portion of their blowhole and head is being exposed.  It could be said that they are, all in all quite unspectacular. I inserted a few pictures I took during my tour to give you a proper impression of what to expect.

I have to say that these pictures are kind of misleading, though. As we entered the lagoon, we came to a little fork in the river with somewhat stronger currents. It was this nutrient rich area we found two dolphins diving for food. It was incredibly challenging to take pictures of that. 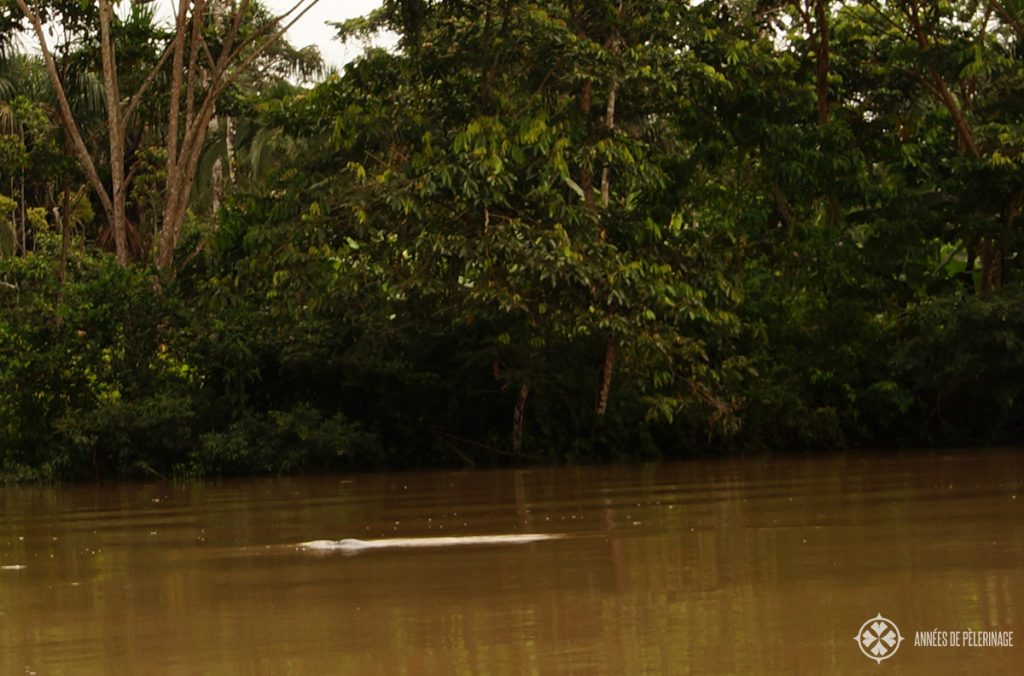 The area was considerably large, but there was no chance to know when and where the dolphins would resurface. So taking pictures turned into guesswork. I would zoom my camera into a certain area, pre-focused and then hit the button as soon as I saw them. Needless to say that 9 out of 10 pictures were not up to my standards – especially on our shaking canoe. But I guess at the end of the day it really did not matter. We were able to observe them for roughly 20 minutes and it really was a special kind of moment. Perfect pictures of the pink dolphins of the amazon would have been a special souvenir, but at the end it’s the experience and the memories that count the most.

Where can you find pink dolphins 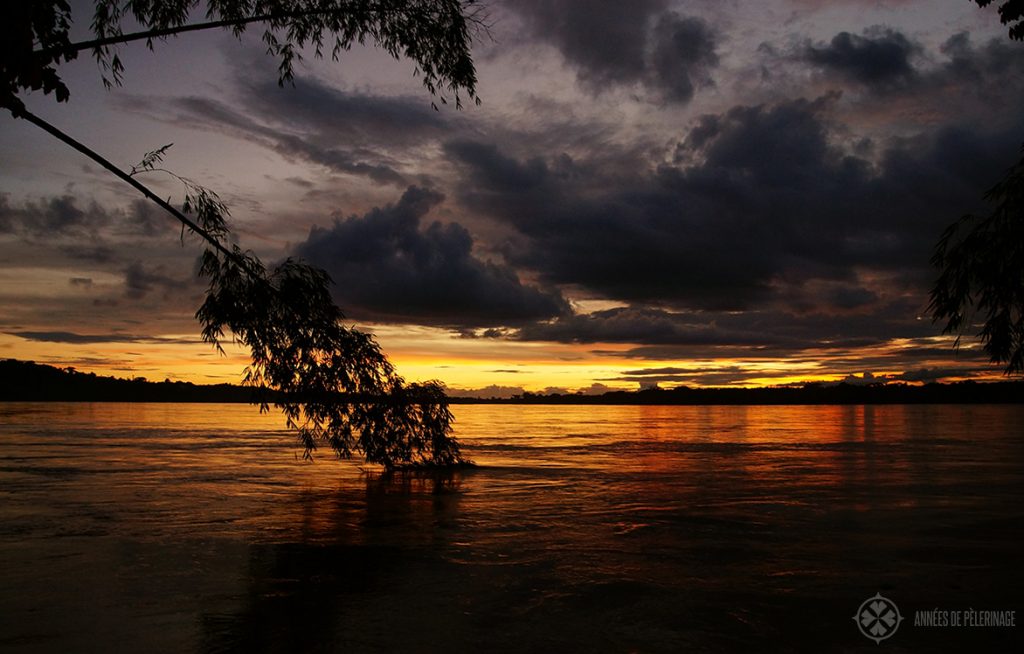 Now you are probably wondering where you can find these amazing freshwater dolphins as well, eh? To that I can only say: I found them at the Pañacocha Lagoon in Ecuador. It is probably easier to spot them in Brasil, where they are more abundant. Luck and very good eyes will help you!

I personally choose the Yasuni National Park as a destination, because it is the place with the highest biodiversity on earth. As it turned out I did not only see pink dolphins, but also the rare tapir (read about that here) and a jaguar. In hindsight I was beyond lucky, but it doesn’t change the fact I DID see them J 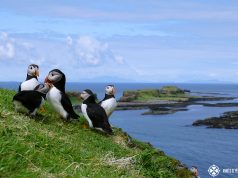 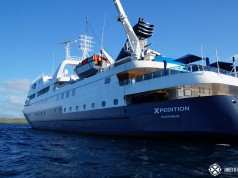