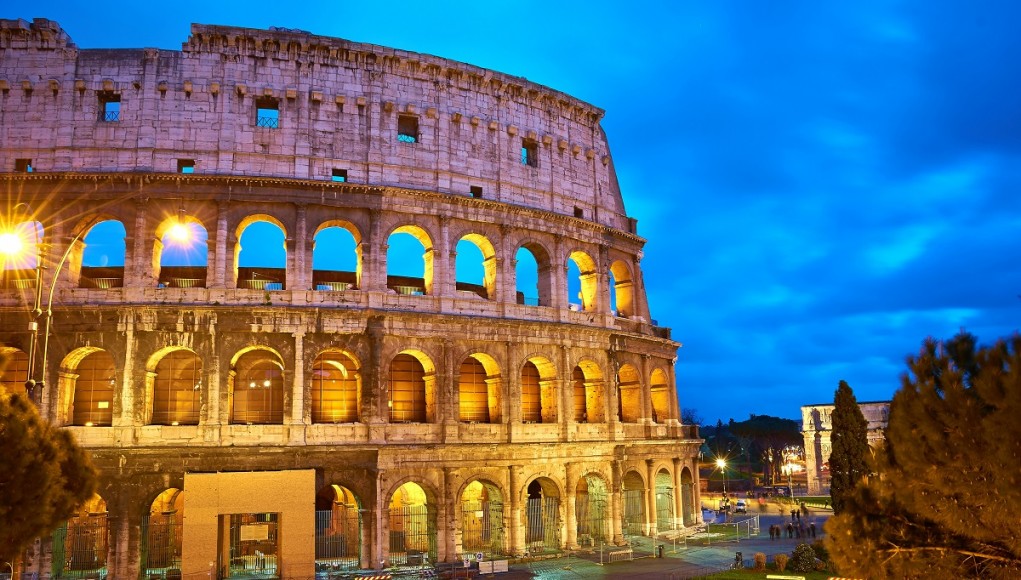 A complete Rome itinerary for spending 5 days in Italy’s spectacular capital and getting the most out of it.

It took way too long, but I finally managed to return to Rome this year. To inspire you I thought it would be a good idea to pen down my final Rome itinerary. All in all, I stayed for five luxurious days in the eternal city. While was certainly (and sadly) not enough time to see 2,000 years of history, I was able to cover the most important highlights for sure.

So here are all the things I did in Rome. Some of them were just mere options, others must-dos. Should you have any suggestions (in particular for restaurants and bars), feel free to comment below. The last time I have been in Rome was 5 years ago and it was really fun to see how certain sights have changed!

If you are currently planning a trip, you should definitely also check out my list of the 20 best places to see in Italy and my detailed Italy packing list. 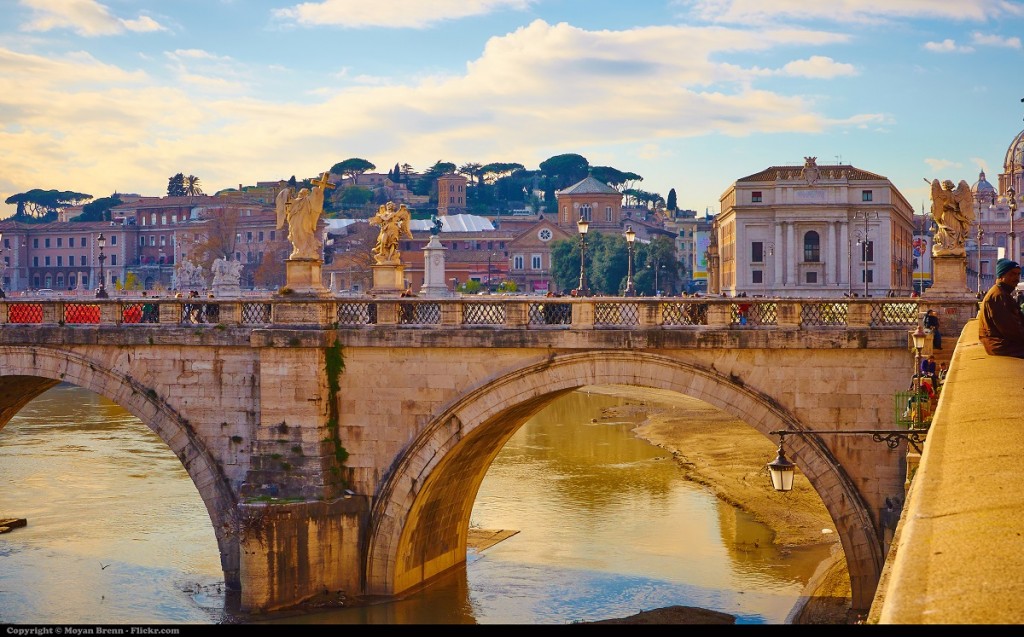 I arrived very early in the morning. I made a habit out of booking only early arrival flights and only late night departure flights, and I recommend you to do the same. While there might be cheaper flights, your most valuable commodity is time. And it really makes no sense whatsoever to save 100 bucks on a flight but then being forced to stay at a hotel that costs twice that amount for one more night with – and a huge emphasis on that fact – hardly more time to spend in the city.

One more note on picking Tuesday. Setting aside that I found a very cheap flight for Tuesday, Monday is also the day almost all Museums in Rome are closed. So it really pays off the plan ahead.

From Fiumicino airport, I took the Leonardo Express train right into the city. I usually prefer taxis and/or limousine services. However, in a big and sprawling metropole like Rome, it’s oftentimes faster, cheaper and better to take public railway transport.

I stayed at the Hotel Palazzo Dama (read my review here), which is an awesome new luxury hotel right in the middle of the city. The Vatican, Spanish stairs, and Villa Borghese are all within walking distance. How cool is that? (I also admit to having struck quite the unbeatable bargain via booking.com; this is an affiliate link)
Starting at noon I was already exploring the vicinity of the hotel and the city. Here is my list:

Of course, I planned to have one of the fabulous gelati on the way and found the perfect place to have dinner after enjoying the Giardino. Since this was my first day I retired early. Walking that much through the city, left me very exhausted. 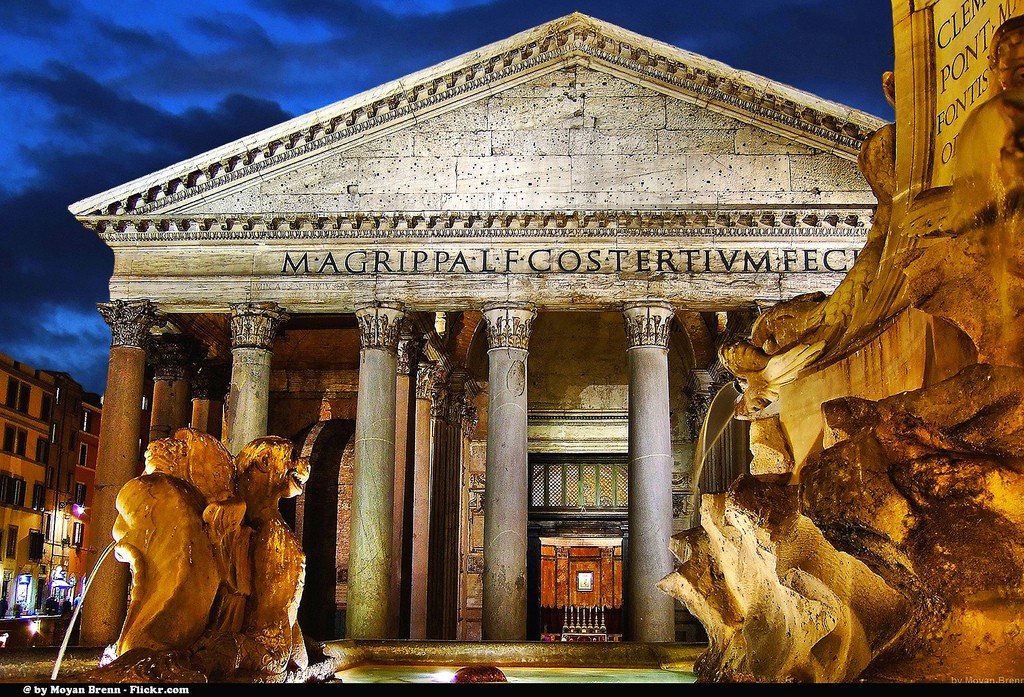 Right after breakfast, I went to see the Domus Aurea. The last time I’ve seen it was in the 1990ies. Since they are planning to close it for good in August, I really wanted to see it one last time.

After that, I walked past the Biblioteca Angelica. I’ve seen so many great pictures on the internet and well..as an avid reader I so wanted to breathe in all that booky must.

Then I headed straights towards the Vatican and St. Peters Basilica. Normally I wouldn’t opt for visiting the museum on a Wednesday. Why? Because this is where the pope has its weekly audience, which means there usually is a huge crowd. Personally speaking, I’d recommend you to go on Friday. Since the weather forecast for Wednesday was quite bad, I decided it would be a good day to spend (mostly) insides.

On the way to the Vatican, I passed the Castel Sant’Agenlo. I didn’t opt to go inside because the weather wasn’t that good on that day. It was in walking distance from the hotel, so I really didn’t see a reason to do it later. (which never happened – so much for a missed chance!) 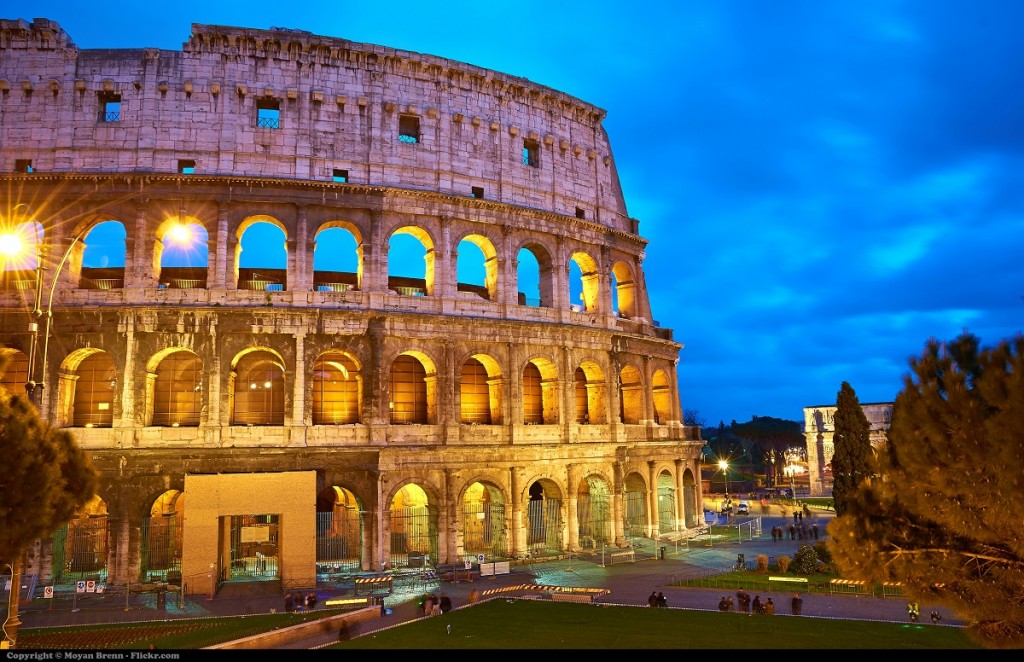 Day three in my Rome itinerary was reserved for exploring the ancient heart of Rome and the Roman Empire. It might be a lot and it meant having lunch in a very touristic area, but I guess that couldn’t be helped. Here is my list:

In the evening, I went to the Musee e Galleria Borghese. It is just around the corner from my hotel and is one of the finest art galleries in town. (Bribed a guy at the entrance to get a ticket, normally you have to reserve a lot in advance!!)

Time to head outside the city and do a small day trip. While there are almost endless options from Rome, I choose Tivoli. I am totally and utterly biased because I wanted to see the Villa d’Este. Why? Well, first of all, it is more than beautiful. But the piano suite by Franz Liszt which inspired this blog is called “Le jeux d’eaux à la Villa d’Este” (if you were wondering: the whole suite is called Années de Pélerinage) was written at this Villa. So there really is no way around visiting.

Hadrian’s villa (Villa Adriana) is also located in Tivoli and probably the most stellar place to visit in Rome. In no other place, the full splendor of the Roman emperors will hit you in the face like that. I wrote a full article on my experience at the Villa Adriana. All I can say: it was a dream. So do check out my article!

Tivoli is located an hour’s drive outside the inner city, so the day will be somewhat packed, but doable.

Since it is Friday I also hit one of the many clubs of the city (which happened to be right underneath my hotel, lol)!

I needed to catch my plane back to Munich, but as it is departing around 7 pm I really had a lot of spare time to explore the city.

This is why I optioned to see the more than famous Via Appia and the Aqueduct park (Parco degli Acquedotti). It’s half an hour’s drive with the metro and offered yet another perspective on Rome.

Sadly I didn’t have time to visit the Jewish Quarter. But as it was only an option I am not regretting it overly much.

Where to stay in Rome? 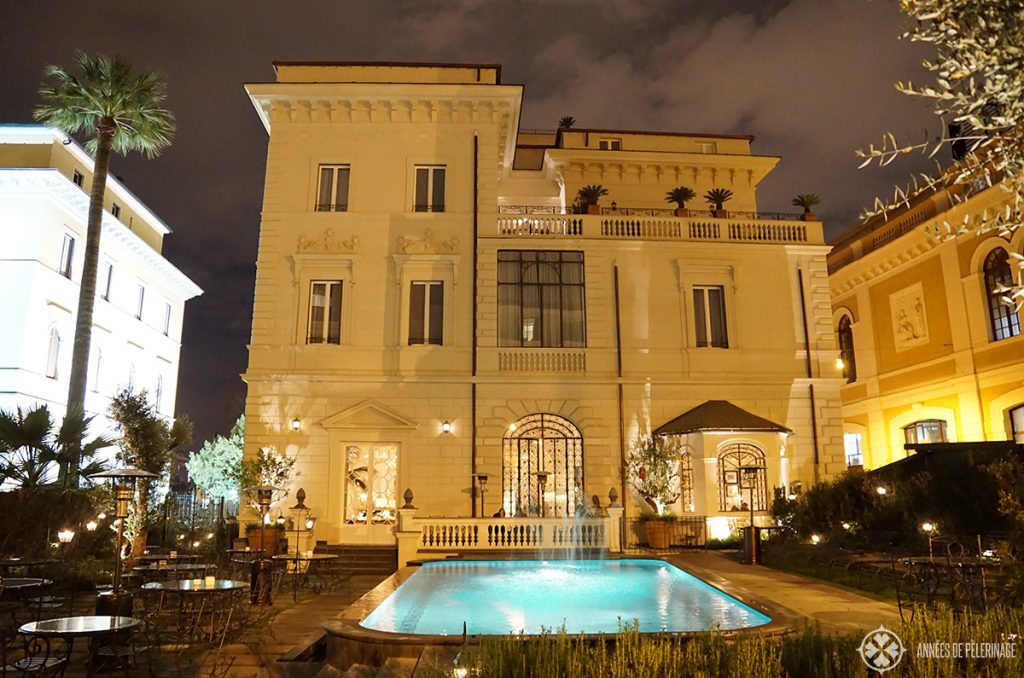 Rome is a city with many hotels, but very few are actually good. I really researched a lot and none of them really could convince me – either too expensive or the standard was just too low for my preference. I finally found the Palazzo Dama. A very charming little hotel located in a renovated old Palazzo right in the center of Rome. Spanish stairs, Castel Sant’Angelo are all within walking distance. The best part: the unique luxury hotel only opened a couple of months ago and already got featured in various design magazines around the globe. 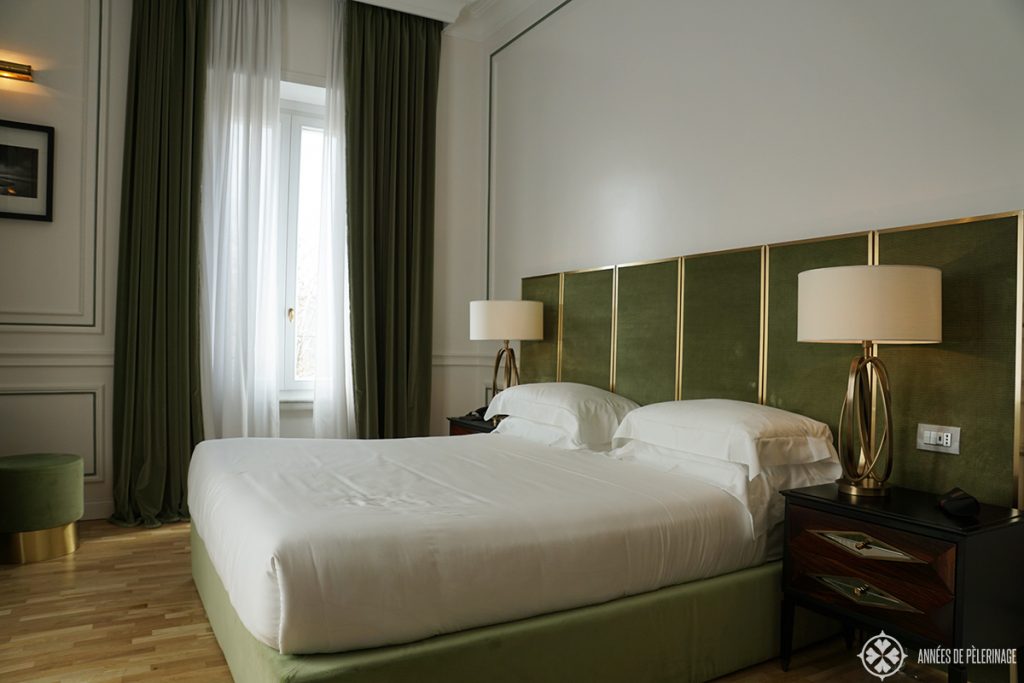 It is a very tiny hotel with only a couple of rooms. So it feels very intimate. Yet it has a pool (very, very rare in Rome), a rooftop terrace and a wonderful bar/restaurant. I can truly recommend this hotel from my heart. Despite the considerably low price (for the luxury that is offered) I’d say it is currently the best hotel in Rome. As always I booked via booking.com and found my best price there.

Check out more pictures and the best prices here >>

Initially, I wanted to buy the Roma & Piu Pass (the Piu version, because it will cover the trip to Tivoli). I would have activated it on day 2 because even that pass won’t cover the Leonardo Express from the airport. I could be taking the slow train, but as I will be walking in the afternoon and the pass is only valid for three days I didn’t see any point. The guys in the hotel told me that paying each tour separately would be cheaper – and it was. I did so much walking and used public transport very sparsely. The subway net isn’t exactly very dense in Rome.

I was considering to book one of the many private tours to the Vatican or the Colosseo because they offer you the unique opportunity to see those attractions without the crowd. Mainly because I really hate tour guides – even if it is just me without a group. I am very fond of doing a lot of research ahead (and afterward) and I don’t like hearing the same rote story thousands of tourists before me. Also, I love walking around the corner…which most guides hate doing. But I am very special in that regard (and I guess it is the very reason I am writing this blog).

Other than that I didn’t have a lot more plans. Actually, this was already too much of a plan. But that’s me. I love to have a very tight plan. A plan that makes me feel in control. Once I am in the city, I usually do everything differently and not according to the itinerary I planned ahead. For me, that is what plans are for: a sound foundation for an upcoming trip. So don’t take all the items within this itinerary as a must do, but rather a list to create your own itinerary.

Last but not least: Why did I choose March? The reason was quite trivial: March 16th is the day I met my partner and this trip was a (quite romantic) birthday present. In my opinion there really is no bad time to choose for Rome. Summer will be very hot with quite the crowd, while winter will be cold (with some museums being closed). Either way, you will always find more than enough things to do with your mostly limited time in Italy’s capital.

If you got any questions about this Rome itinerary or feel like I need to add an item or two: Let me know in the comments below or hit me up via social media! 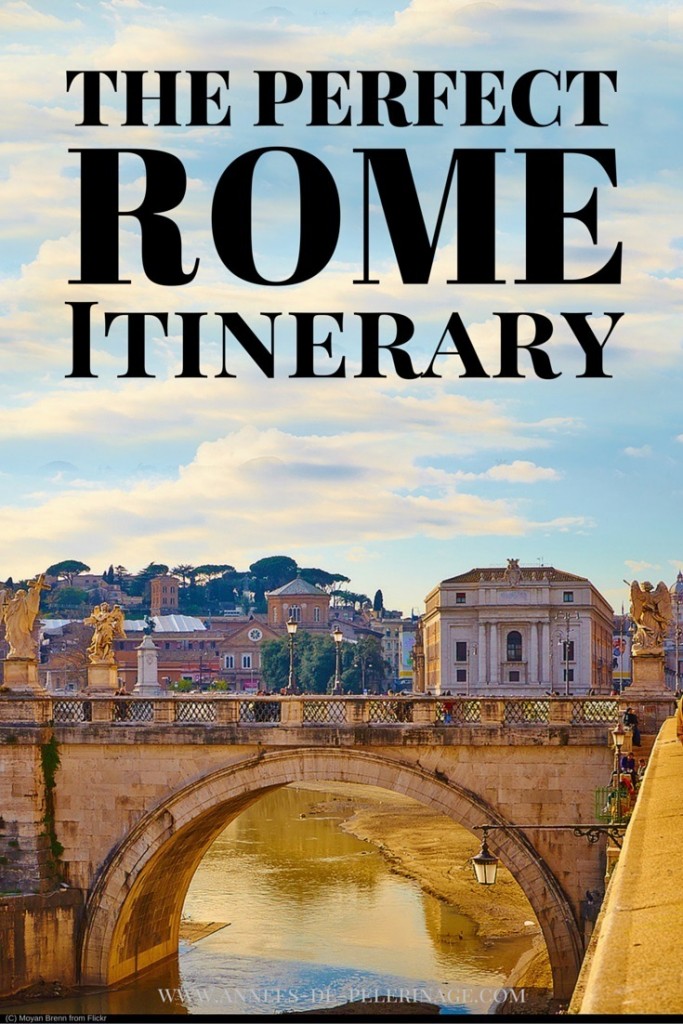 Pictures: As I the trip was still in planning when I wrote this article, picture credit goes out to Moyan Brenn from Flickr. You can see these pictures and more of this work here. 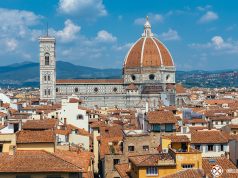