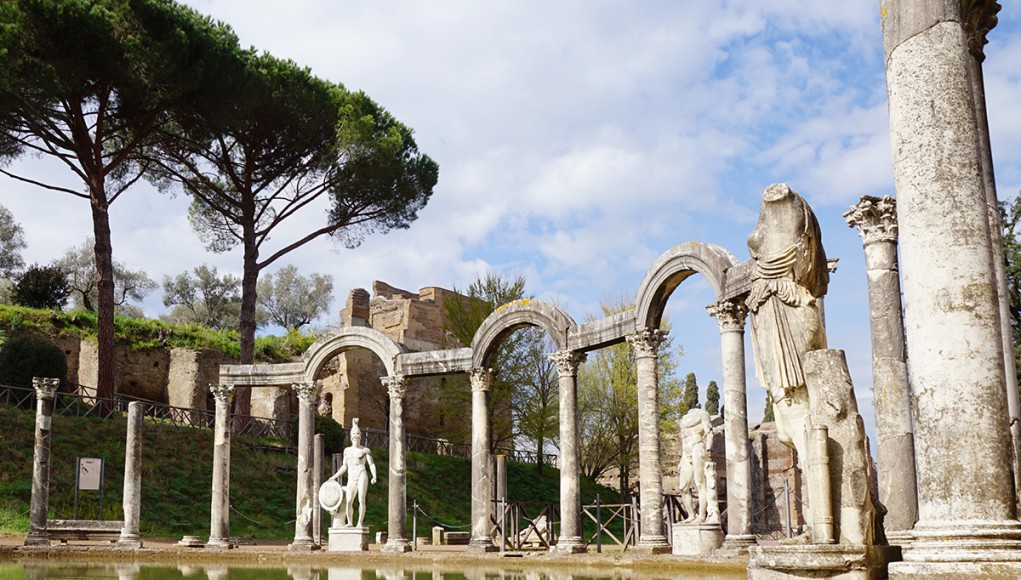 On the far outskirts of Rome lies an architectonical gem very few tourists ever get to see: The Villa Adriana. Built as the private retreat of Emperor Hadrian, who reigned the Roman Empire in the 2nd century AD, the gigantic archeological complex spans more than a square kilometer and is a UNESCO World Heritage site. 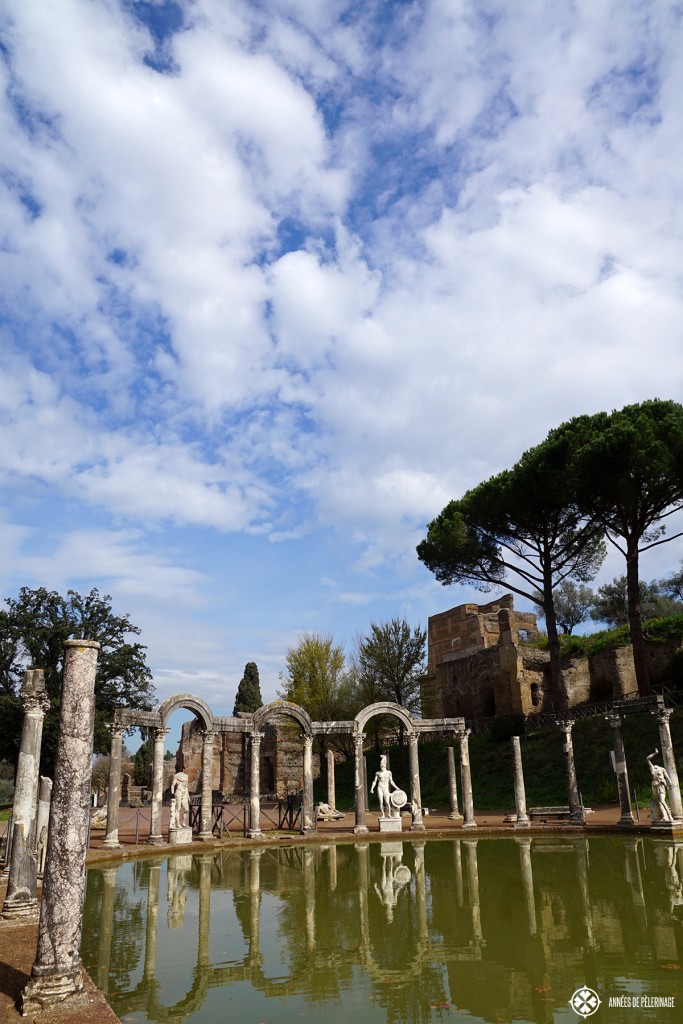 I find it hard to describe the full beauty of the villa, especially since it survived almost 2.000 years of human destruction. Mind you: Villa Adriana is far from pristine. Most of the outstanding artwork found a new home in museums throughout the world. Vatican, Louvre and British Museum, the list is long as august. Despite the pillaging the villa still radiates its former glory in copious amounts.

For me there was no way around putting Villa Adriana on my Rome itinerary (check it out here). Strangely enough Hadrian’s gigantic villa sees hardly any tourists – only about 100.000 a year. Compare that to the Colloseum with way above 5 million. Part of the reason could be that it lies so far outside. Some 30 lilometers in a little town called Tivoli (see below if you are wondering how to get there). 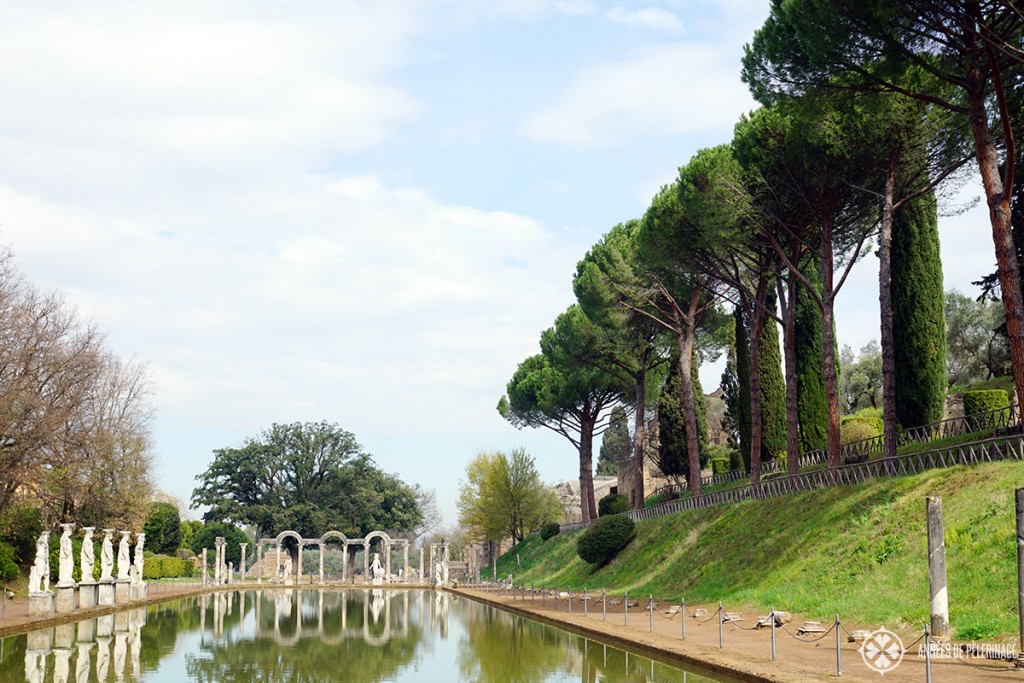 But I also guess that the Villa Adriana puts some demands on the visitors’ imagination. What survived is far from complete, yet no less beautiful. With each step you take, you only get a glimpse of the former grandeur – the rest is left to your imagination. 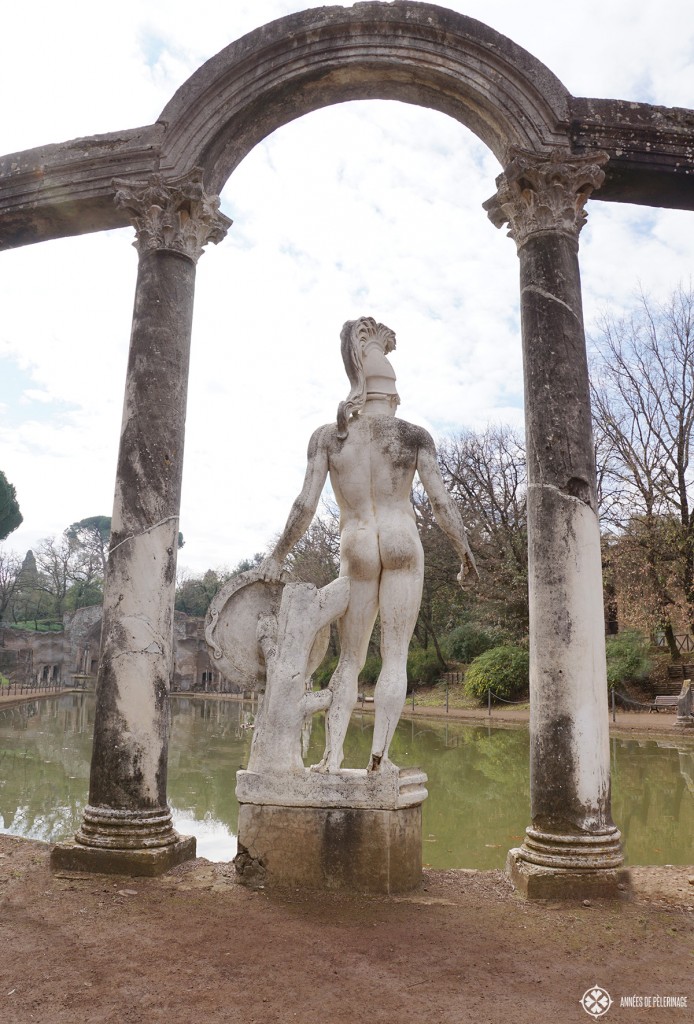 Right at the center of the Villa Adriana visitors will find a large pool surrounded by a colonnade. Almost 119 meters long and 18 meters wide, the Canopus is by no means a small affair. Once Greek and Egyptian statues have lined its banks, but only a handful of them are still in place. The rest can be found in the Vatican Museum (which you absolutely should visit). The utmost beauty of the place, however, persists seemingly undisturbed. 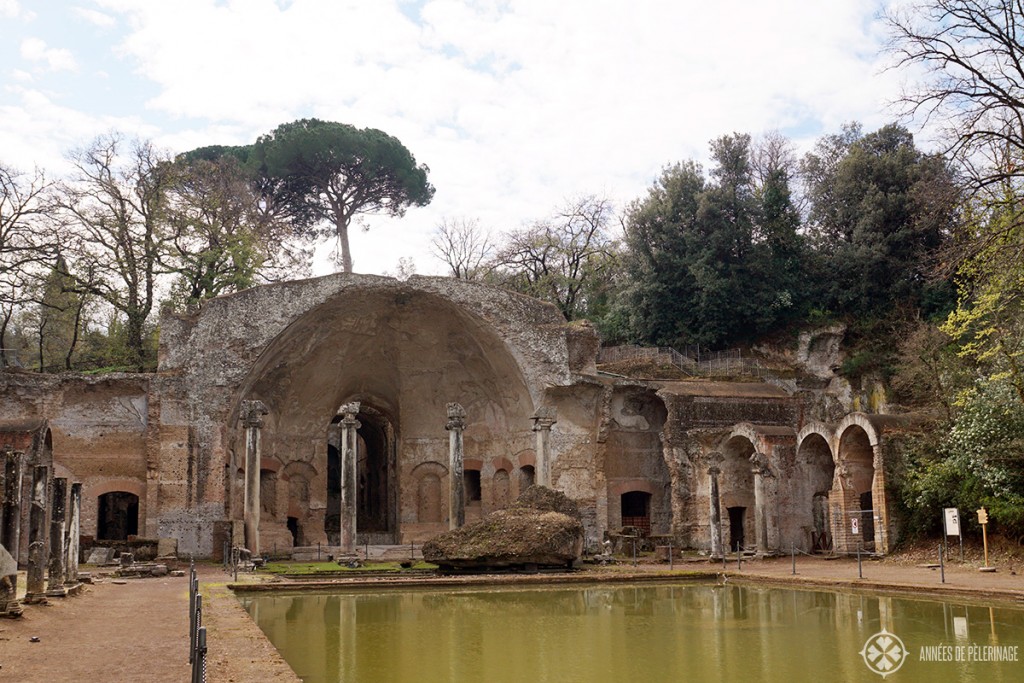 At the far end of the pool lies a banquet hall, called Serapeum. One is almost left speechless thinking what dining with the Emperor must have been like. The large dome is still standing and gives you a very accurate impression of its former glory.

Hadrian was a lover of arts. So it is little wonder he built a theater within the confines of his retreat. But what is now called the Maritime Theater is actually no stage, but a round portico surrounded by yet another pool. The whole affair was 40 meters in diameter and only accessible via two wooden drawbridges. Here the emperor could relax without disturbing. Sadly the Maritime Theater is currently closed because of extensive restoration work. 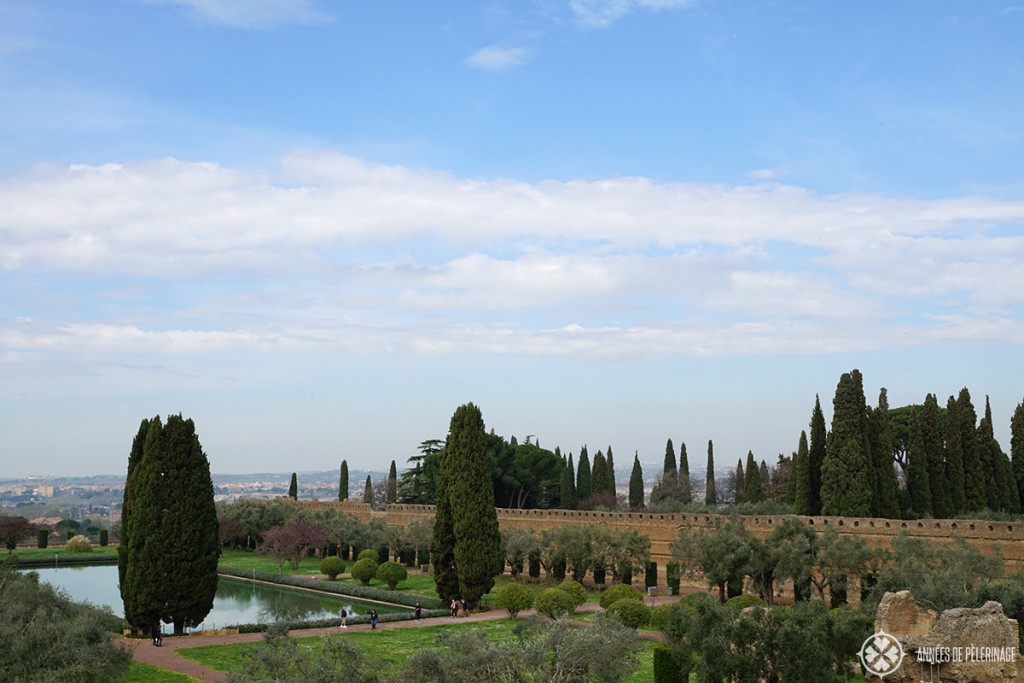 Visiting the Villa Adriana almost feels like you were in some kind of ancient water amusement park. Right at the entrance you are faced with a pool of truly colossal dimensions. 232 meters long and 97 meters wide, the park like structure is actually resting on an artificial terrace. 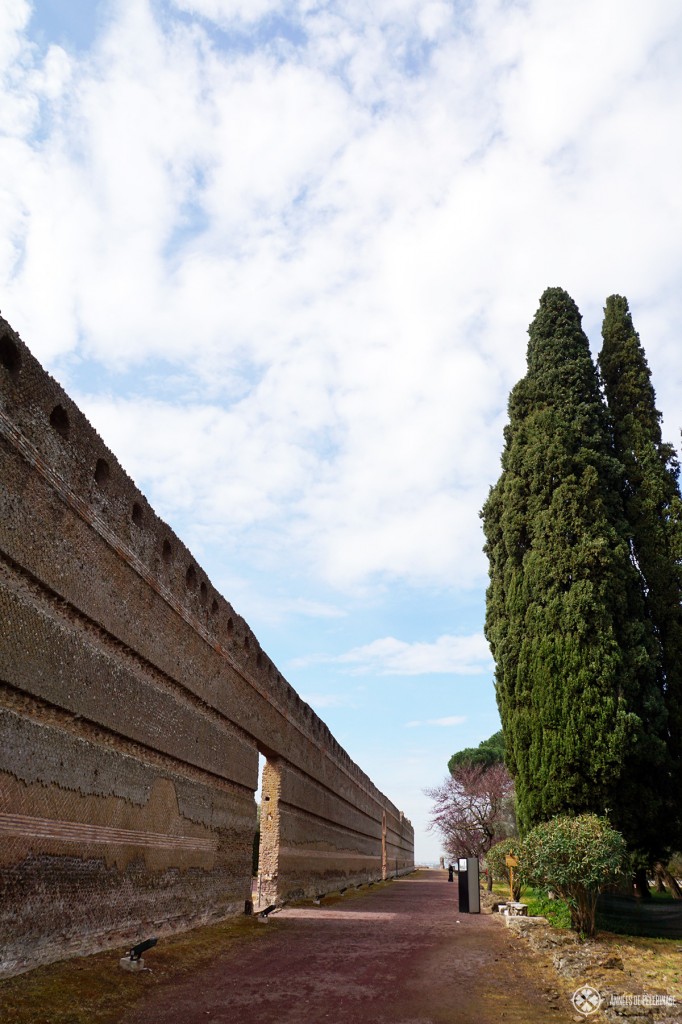 This was probably truly a swimming pool, though the colonnade surrounding it did not survive the ages. The more than impressive wall around it still stands though. Actually the sheer size reminded me a lot of the Forbidden City in Beijing (read about my experience here). Privacy, it seems, was important to Emperor Hadrian. 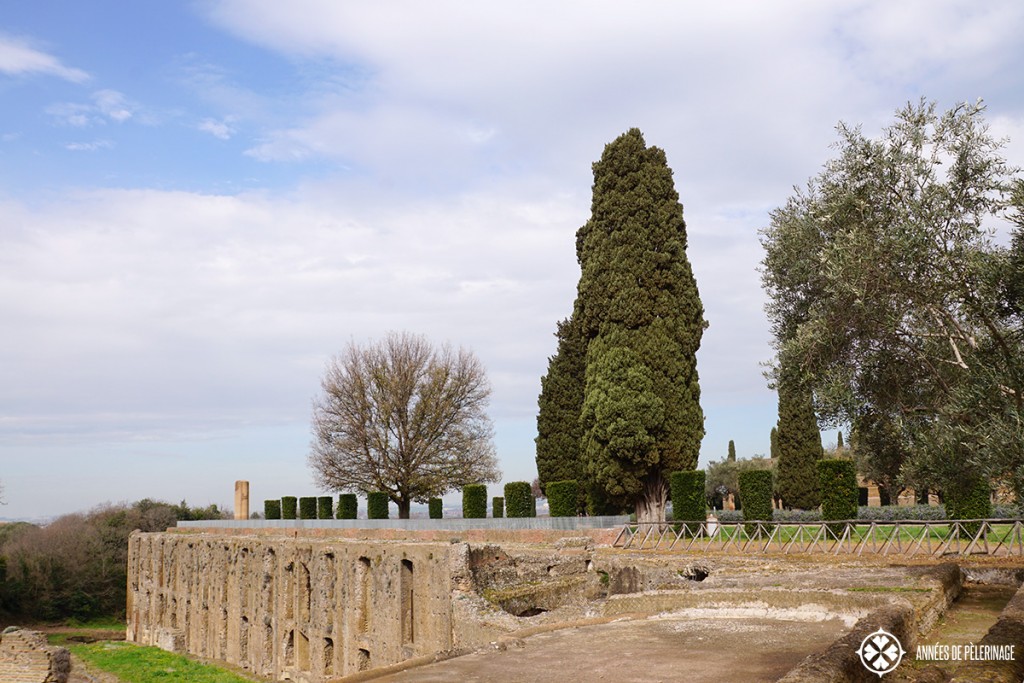 The terrace below is particularly striking – more so, since the whole area is honeycombed with subterranean tunnels. These tunnels once were reserved for servants, so the emperor and his guests could go about their business undisturbed.  It is estimated that roughly 1.500 servants found quarters here, just to give you a sense of dimensions! 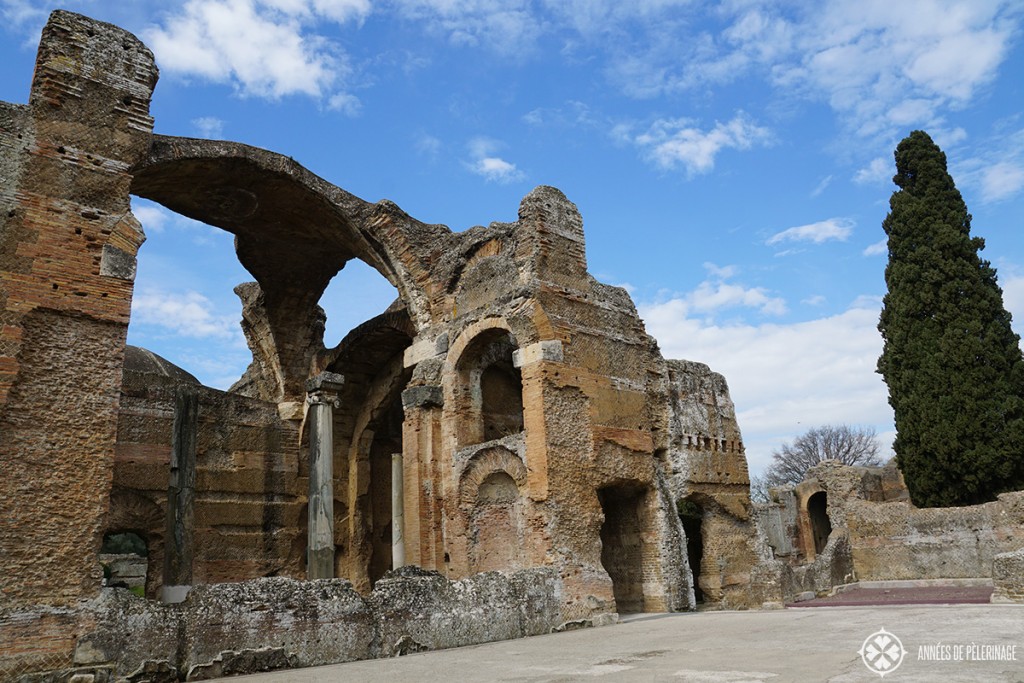 It is probably common knowledge that the Romans loved their baths. With all the pools around Villa Adriana it is little wonder that there was also a huge Thermae to be found on the ground (actually there is a smaller, second one as well). 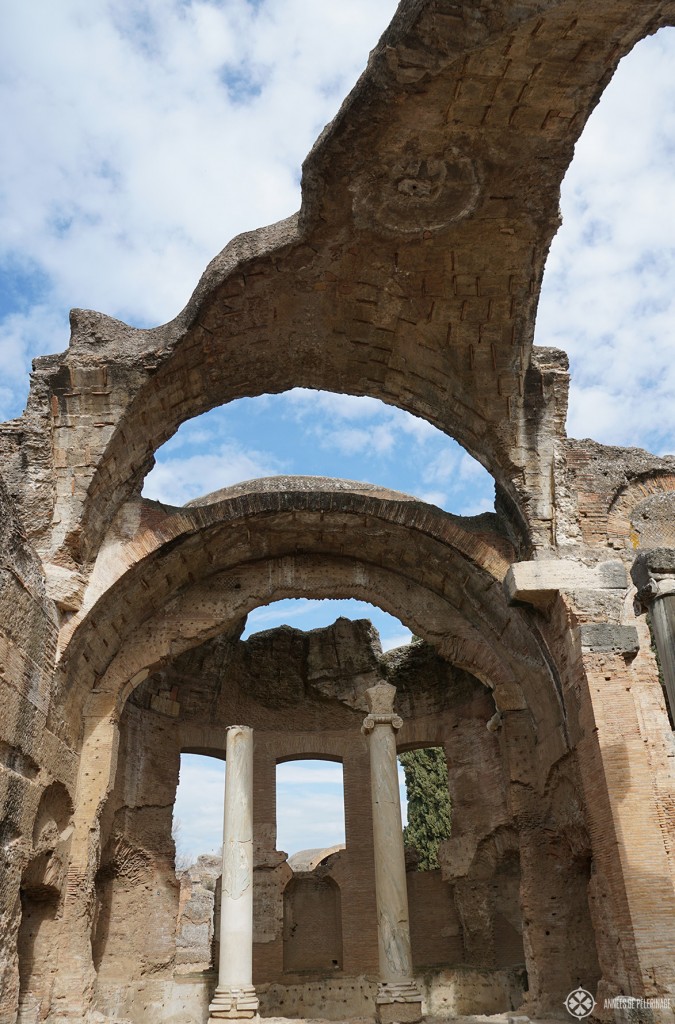 Parts of the large domes of the structure survived and if you look very closely you can even see a bit of the ancient stucco lining the walls and domes. How and why they are still there is more than just a miracle.

Other sights and highlights 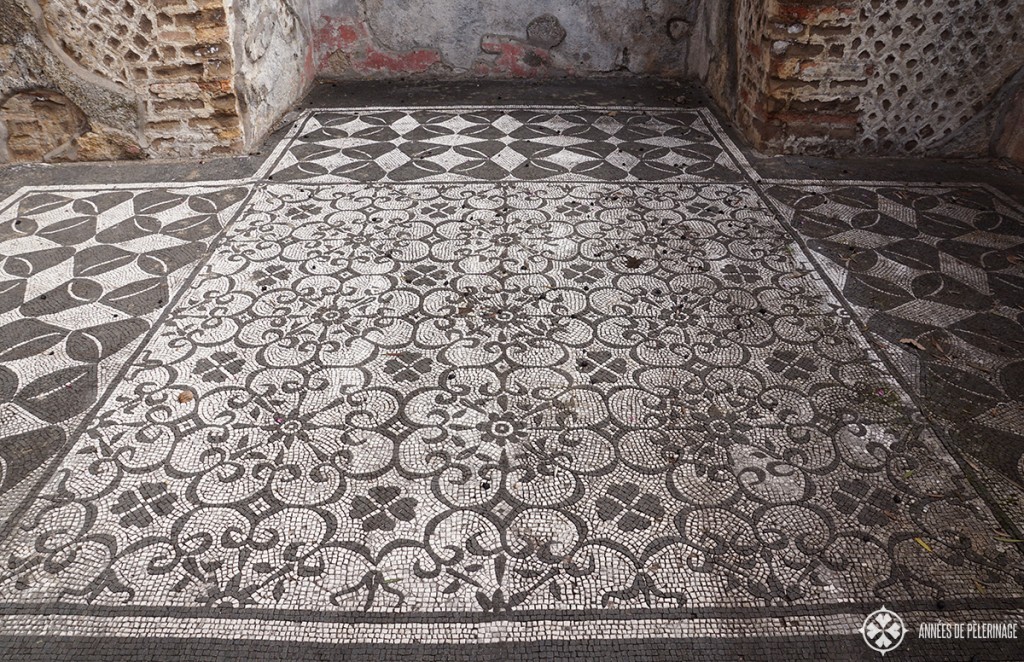 Personally I found the Hospital the most amazing part of the Villa Adriana (Okay the second most amazing right after the Canopus). Large parts of the beautiful Floor Mosaics survived here. But not only in one room, but in 10 or more little quarters once reserved for the eclectic guests. 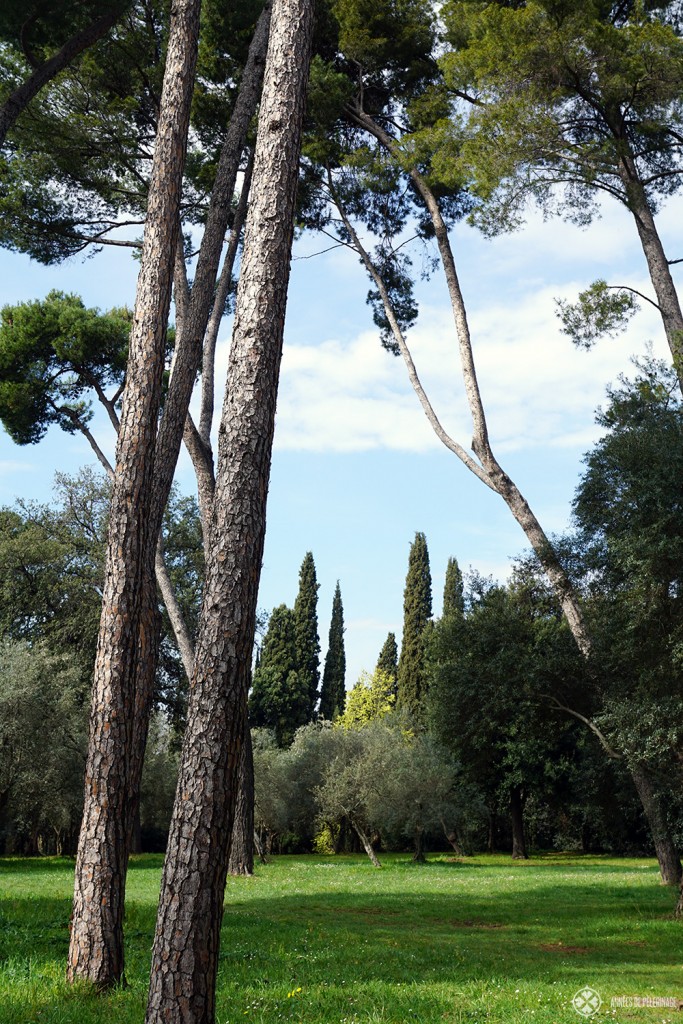 But I should also mention the whole setting of the estate. A beautiful park with tall cedars surrounds it all. During my visit I hardly saw any tourists (literally one other group of 3), so it all had this ultimately relaxing atmosphere. 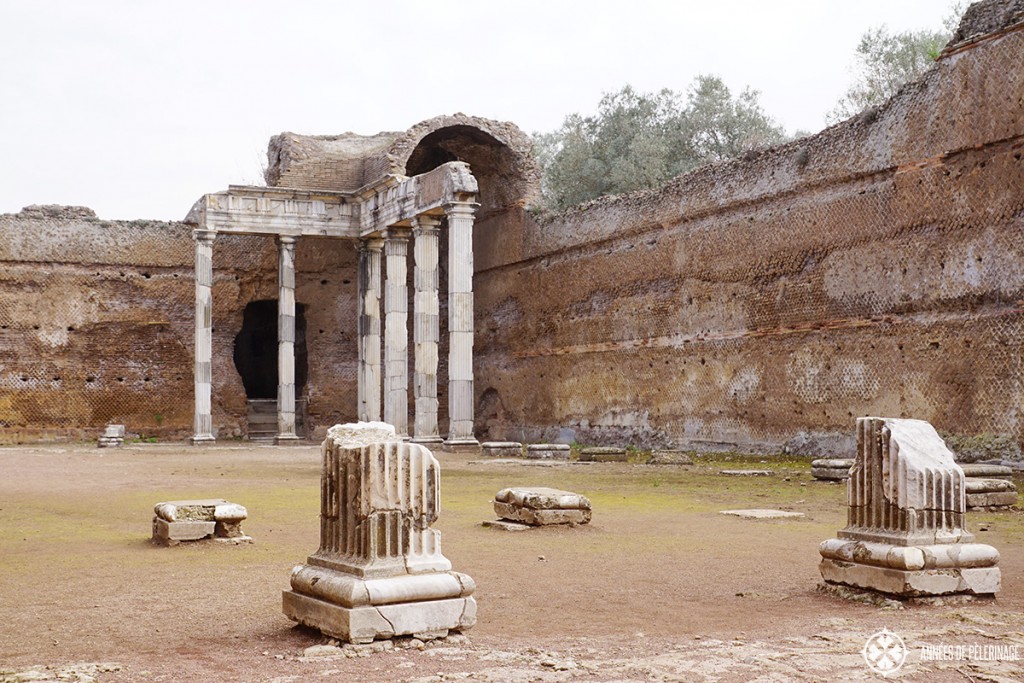 Also it is quite hard to convey the sheer size of the villa with pictures. Courtyard after courtyard, pool after pool is crowding the impressive grounds. It really makes you wish to have been here during the second century AD, when the emperor held court here. What an outstanding sight that must have been. 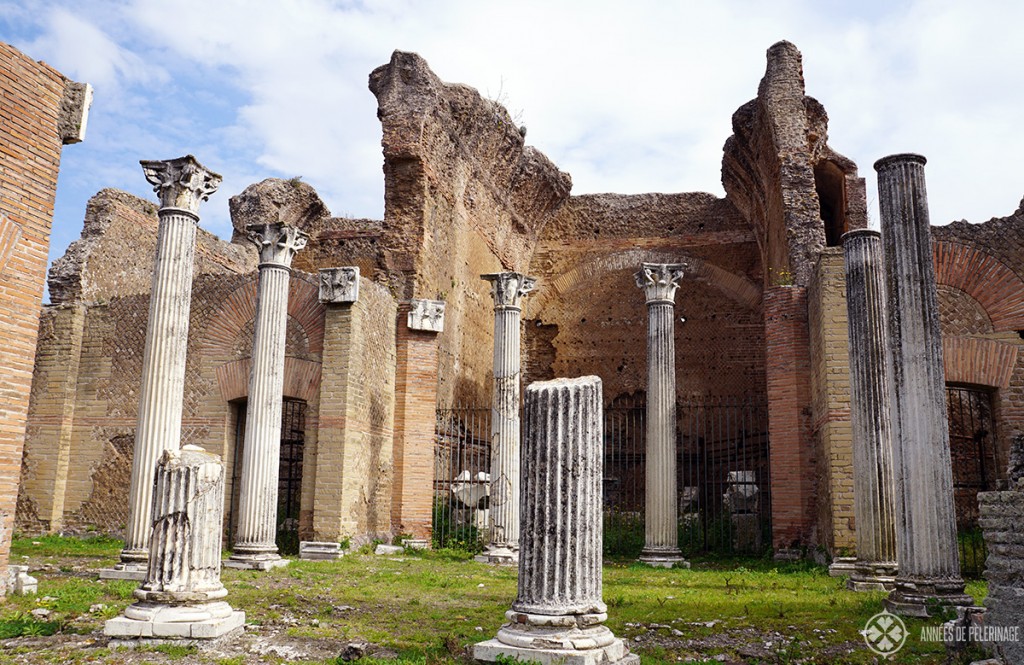 All in all my tour through the villa took about 2 hours. The whole terrain is almost flat and with wonderful pathways, though getting to the Villa Adriana involves walking up a small hill. Even though there are big signs explaining the many sights in four languages, it might be worth taking a knowledgeable tour guide.

How to get to Villa Adriana 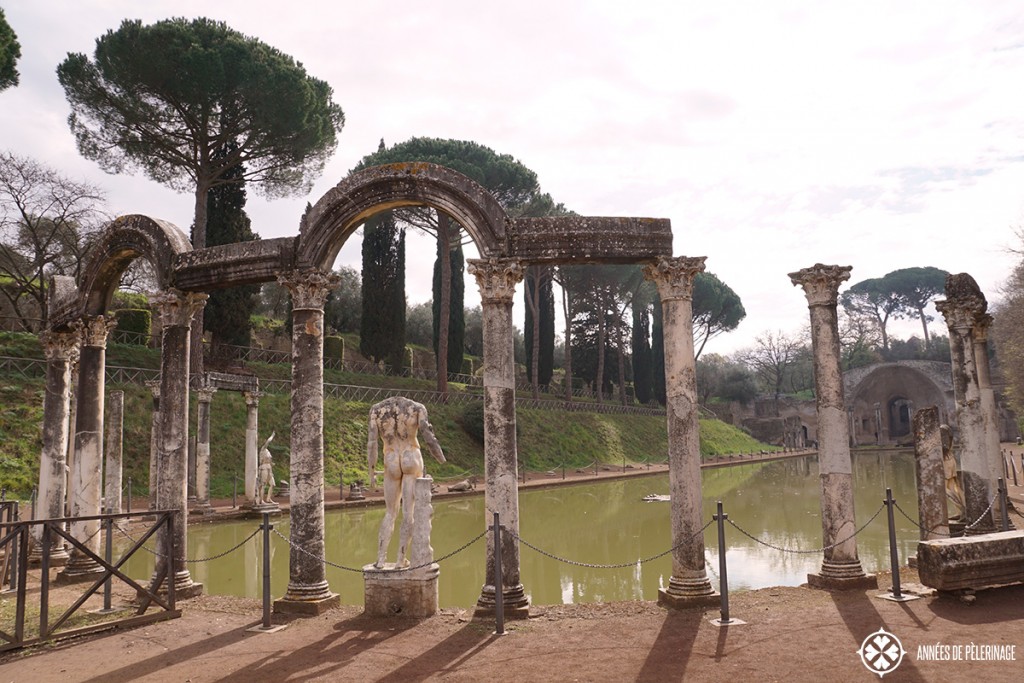 Now that you have seen my (hopefully) amazing pictures, you are probably wondering how to get to the Villa Adriana. Hadrian’s former estate is located on the outskirts of Tivoli. It can be a bit complicated to get there, but it is far from impossible. Basically you got three options to get to Villa Adriana:

1. By far the easiest and fastest is taking the Cotral Bus from Ponte Mammolo Metro station (line B1; that’s the blue one). Buses leave every 15 minutes or so from level 2 of Ponte Mammolo. You can buy tickets in the basement of the station. Just pick the next bus going to “Tivoli” and tell the driver you need to get to Villa Adriana. He will drop you out on the highway (via Tiburtina).

From there it is a 15 minutes’ walk to Villa Adriana through a residential area. There are some signs, but it is basically a straight walk up a small hill (you will see high cedars in the distance).
The bus ride will take about 30 to 50 minutes as Tivoli is quite far outside.

If you don’t want to walk, there is a Cotral Bus leaving from Ponte Mammolo stopping directly in front of Villa Adriana as well, but it departs very infrequently. You would have to check the schedule here. You could also head right to Tivoli and take a local C.A.T bus to Villa Adriana, but that will take another half hour.

As for getting back: You can either walk back to Via Tiburtina where you arrived and hop onto the next bus headed to ‘Roma’, or take the local bus leaving directly in front of Villa Adriana to Tivoli center (and either go back to Roma or visit the Villa d’Este).
Remember that each Cotral bus will have a display in front stating where it is going.

2. Your second option to visit Villa Adriana on a daytrip form Rome is taking the train from Tiburtina Metro Station to Tivoli. This is a bit tricky, because you will have to walk to the center of Tivoli (Piazza G. Garibaldi) and THEN take a local bus to Villa Adriana. There is tourist information on the main intersection of Tivoli center. Make sure to ask them.
The train will take roughly the same time.

3. There are a couple of tourist agencies offering guided tours from Rome. If you are not comfortable with local bus rides and finding your way (as well as walking quite a bit), this would be the easiest option. It will be a bit pricey as well – expect prices starting from 75 Euros for the trip.
I had absolutely no trouble of finding my way around. Google Maps and GPS on my smart phone really were a great help. But I could image that less experienced travelers would be way more comfortable (and faster) with taking a guided tour from Rome 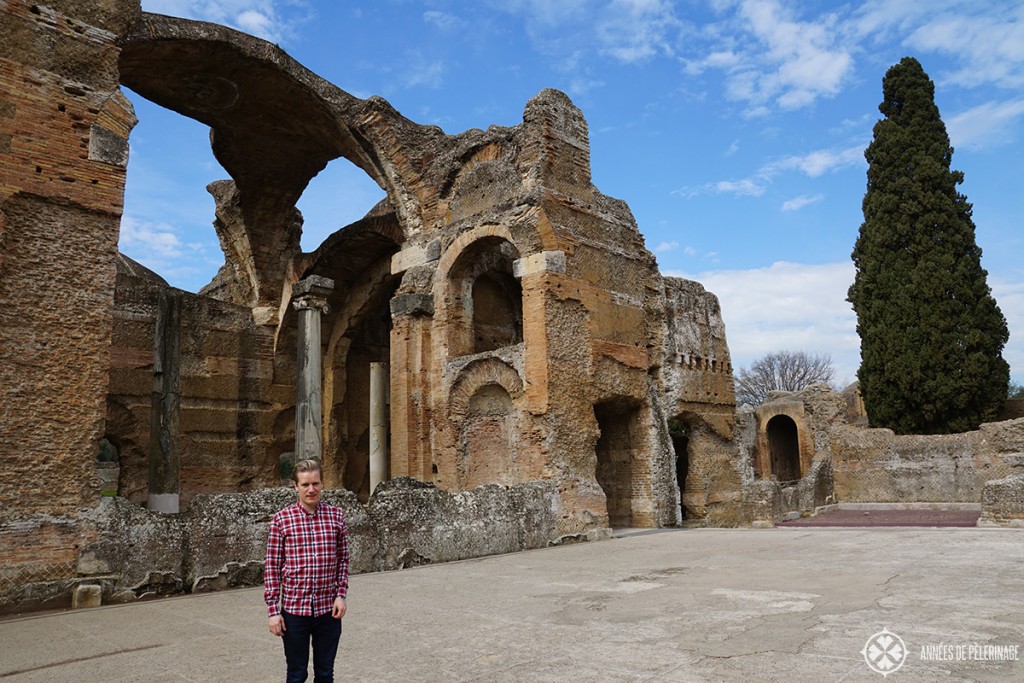 The Villa Adriana truly is beyond amazing and I urge you to see it for yourself. If you love Roman architecture and the Romans in general, there is no way around a visit. Mind you, compared to the Pantheon or the Colosseum, the beauty of the ancient buildings is a bit harder to grasp. Hadrian’s Villa is far from complete and might better be described as a ruin. But it is probably the only place in the world where you can still get a true sense of ancient roman court life. Last but not least it gives you the opportunity to leave the city on a small day trip to see more facets of the eternal city and Italy. Since the outstanding Villa d’Este is only a couple of kilometers away, a trip to Tivoli will be well worth your time.

If you have questions, make sure to ask them in the comments below. Liked my guide? Share it on social media! 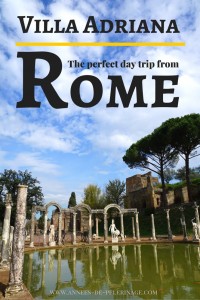 20 pictures of Venice, Italy that will make you want to visit

One day in Venice, Italy – The best things to do 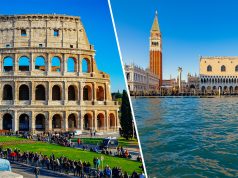 Venice or Rome? Which city in Italy should you visit?