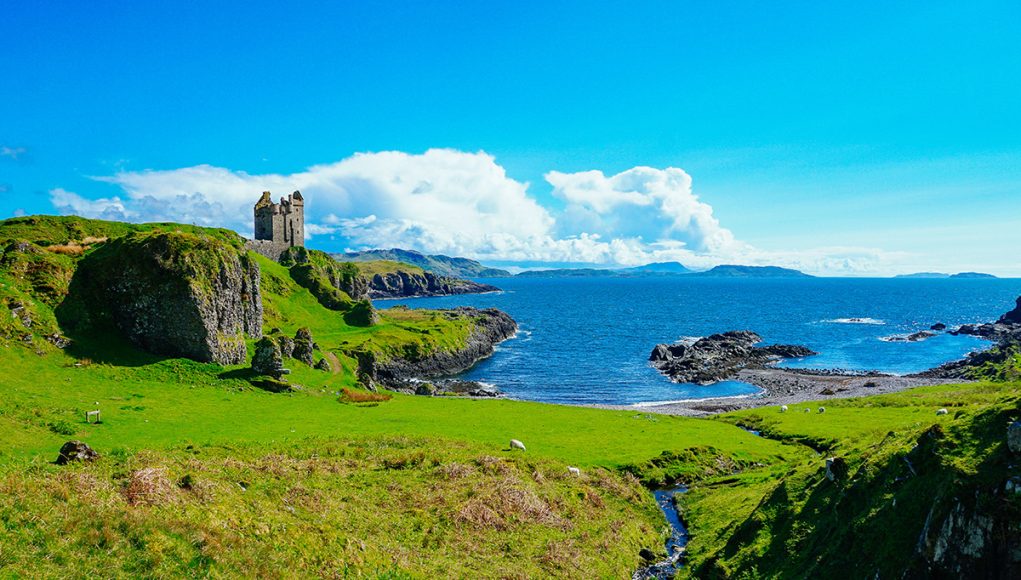 One for the bucket list: A list of the 15 best castles in Scotland you really need to visit!

Did I ever tell you I am madly in love with Scotland? I love the people, I can’t get enough of the beautiful landscape, but above all, it’s the Scottish castles I like the most. On my last trip to Scotland (find my itinerary here) I wanted to see them all or die trying. Haha! Well not exactly.

How many castles are there in Scotland? Over 4,000 castles, can you believe it? You’d need a lifetime to see them all. There are just so many amazing things to see in Scotland. As you probably do not have that much time, I had to narrow it down to the most amazing specimens. Here is my list of the best castles in Scotland:

Note: If you are planning a trip to Scotland, you should definitely check out my Scotland packing list!

You have not seen Scotland if you have not seen Eilean Donan. This castle is beyond picture-perfect. Located on a small island where the three lochs Duich, Long and Alsh meet, the water acts as a mirror to the perfect scenery surrounding it. Since 1932 it is open to the public, though no tickets are needed to tour the small castle grounds after the main building has closed.

Construction started in the 13th century, though what you see now is largely a 20th-century reconstruction. It is probably the most photographed castle in Scotland and you can easily visit it when you are taking the road to the Isle of Skye (don’t forget to read my guide to the Isle of Skye).

Note: It pays off to check a tide chart before you visit! It’s only half as pretty (but still pretty) at low tide.

Dunnottar Castle is one of the most auspicious tourist spots in Scotland. The ruins of the medieval fortress have been featured in uncounted films. Located on a 50-meter high cliff, Dunnottar Castle is especially beautiful when early morning mists surround the property. It was built in the 15th century and is very close to Aberdeen.

This scenic castle on the western side of the Isle of Skye is a true treasure. It is owned and operated by the MacLeod clan for 30 generations over almost 800 years. The best part: You can actually get inside and see how they used to live. The gardens are quite spectacular as well, as is the Loch in front of it, where a colony of seals took residence. Read more about Dunvegan Castle here.

Note: Again, check the tide chart before you visit

This beautiful castle is located in the Scottish West highlands. What makes Inverlochy special is that you can actually sleep here. It is a unique luxury hotel offering you to feel like a lord or a lady for a day. Or make it a week. There is just so much to do in the area of Fort William. Find prices and more pictures here >>

Towering above Scotland’s capital, Edinburgh Castle is the most visited tourist attraction in the country with over 1.4 million visitors each year. It is quite an ancient place. The first settlements date back as far as the 3rd century, while the oldest building (St Margaret’S Chapel) was built in the early 12 century. If you are looking for a full guide, then check out my comprehensive list of 20 amazing things to do in Edinburgh.

Today the castle is a museum focusing on the military history of Scotland. The ticket price is 17 pounds per person (adult), so quite expensive. If that’s too much for you, here’s a lovely guide with free things to do in Edinburgh.

If you still decide to go, absolutely be there for the 1 o clock gun thundering from its embattlements across the city each day! The annual Edinburgh Military Tattoo is also an auspicious date to visit. But remember to buy your tickets way in advance. There’s also the Hogmanay Festival, you really shouldn’t miss.

Gylen Castle is, by far, the best castle ruin in Scotland. It is hidden away on the Island of Kerrerea just in front of the town of Oban, and only a few tourists come here. Gylen Castle was once built by the MacDougall clan in 1582 but never served as a permanent residence. Take the ferry from Oban and hike along the beautiful island to see its beauty. Oh, and I might add: It is my favorite spot in Scotland!

Blair Castle near the village of Blair Atholl is the ancestral home of the Murray clan. The castle is famous for its beautiful gardens but especially famous for the Atholl Highlanders, said to be the only legal private army in Europe!

Do visit in May, when the Atholl Highlands games take place! It is probably your only chance to see the duke in full regalia! And besides, what would a visit to Scotland be, without some bagpipe madness, eh?

The most famous castles in Scotland is Balmoral. This architectonic gem is the official Scottish residence of the Queen in the summer months. Quite apparently Balmoral will be closed to the public while the queen is there, while you can tour the excellent gardens and the Scottish highland scenery when she is not. Be aware that it is not really possible to go within. Only the (quite spectacular) ballroom is open to the public on regular tours.

Duart Castle is located on the Isle of Mull and home to the MacLean Clan. For more than two centuries it lay in ruins and wasn’t restored until 1911 when Sir Fitzroy Donald Maclean bought back the property. Now, once again it is looking across Loch Linnhe and its beautiful scenery.

The Wallace Monument is not really a castle, but the impressive tower still made it on the list of the best castles in Scotland. It was built in the 19th century as a war memorial in the Victorian Gothic style. It is possible to climb to the topic of the 67-meter high sandstone tower and enjoy a beautiful view over the whole valley. From here, you can see the beautiful bend of the river Forth! So worth it

Urquhart Castle is located right on the banks of Loch Ness and drives thousands of tourists to hunt down history among its green lawns. The castle is in ruins, but otherwise very well preserved. It is, by far, the most-visited castle in Scotland and a bit of a tourist trap. I really gotta say it’s nothing all that special

Kilchurn Castle dates back to the 15th century and the first Lord of Glenorchy. The huge five-story tower house impresses with its perfect vista of Loch Awe. It is open to the public during the summer months and makes for a wonderful day trip from Oban. Entrance is either via boat or on foot from Dalmally.

Those of you who have seen Monty Python and the Holy Grail will probably recognize Castle Stalker. The four-story tower house above Loch Laich appeared in most of the castles scenes in the film. As Castle Stalker remains in private ownership, it is open to the public only a few days a year.

One over the most imposing castles in Scotland can be found in Inverness. The red sandstone castles dating back to 1836 is once again partially open to the public, so it’s really worth a visit, as the view is quite nice.

Trivia: An illustration of the castle can be seen on the reverse side of the 50 Pound note since 2005

Tantallon Castle is quite a unique place. It dates back to the 14-century and consists of a single large curtain wall guarding a coastal promontory. It is a ruin, to be sure, but the scenery is quite breathtaking – especially the view of the fantastic Bass Rock

Other castles in Scotland

So that was my list of the most amazing castles in Scotland. To be quite frank with you, there are just so much more. I found one amazing book on Amazon that covers them all. The Castles of Scotland: A Comprehensive Guide to More Than 4100 Castles and Towers. Sounds impressive and actually is.

Last but not least, if you feel like I missed any insider tip, let me know in the comments below! Also, know that there are a ton of private mansions and beautiful lighthouses worth their own books (and many have been written). If you want to see a lot of castles I recommend you to do a road trip, as you will be able to stop for a picture (or two) whenever you want to.