Egypt and the pyramids belong together like New York and the Statue of Liberty or Paris and the Eiffel tower. Most people will want to visit the Great Pyramids of Giza (read my guide), but if you really should plan some time to visit the Step Pyramid of Djoser in Saqqara well.

Why? Well, while there are so many things to do in Cairo (do read my list), Saqqara really surprised me the most. It was not only the sheer age of the site, even though I was fully aware the site was older than Giza & the Sphinx. It was also maybe ten times less crowded there, but, perhaps most importantly, the site retained some sort of spirituality and timeless beauty I missed at other sites.

Here is everything you need to know to visit the Step Pyramid of Djoser in Saqqara on a day trip from Cairo.

Note:  Definitely make sure to read my ultimate Egypt travel guide as well

The Step Pyramid of Djoser 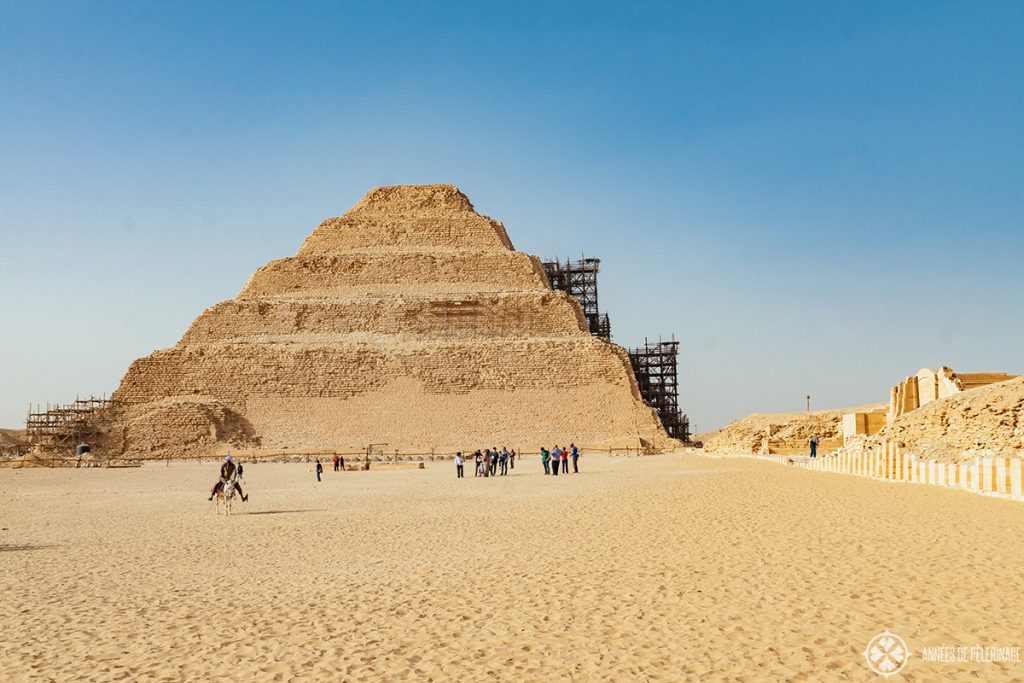 You can find them in China, South America, and even Tenerife – but the first true pyramid ever was built in Saqqara Egypt. Pharao Djoser of the third Dynasty conceived the plan, enlarging his mastaba further and further (due to his long reign) until he ended up with a gigantic step pyramid.

You see, the Pyramid was originally a standard royal mastaba – a square burial house if you will (or lets rather call it palace for its sheer size). This mastaba was first enlarged on all sides and then developed into a pyramid with 4 steps. In the last step, the small pyramid was again enlarged to 6 steps to one side. 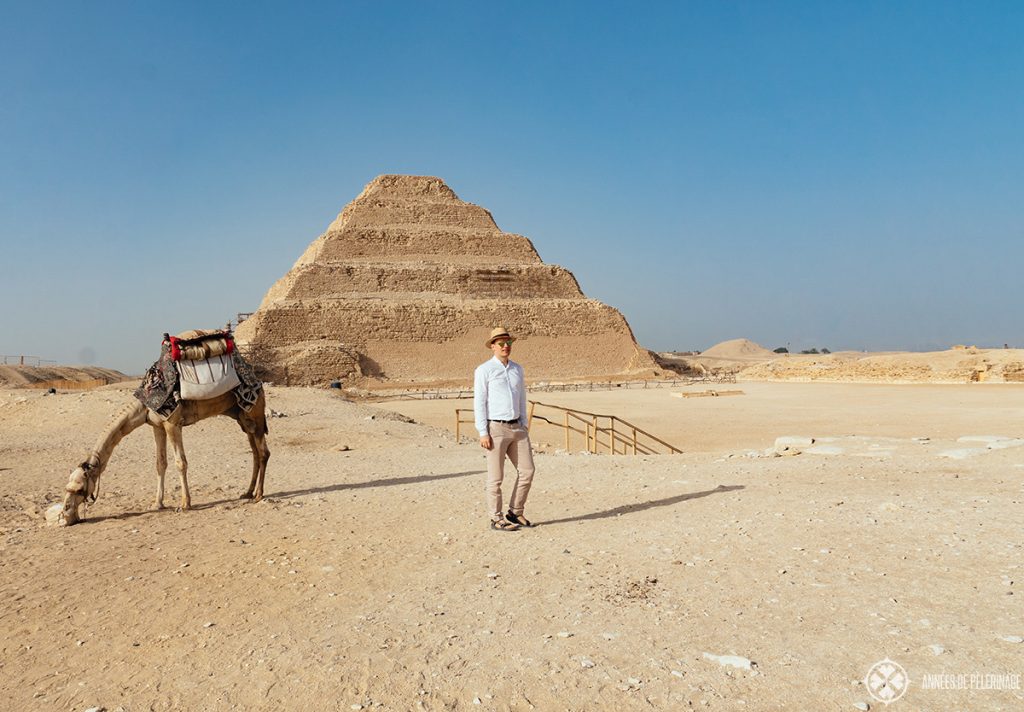 Imhotep was the architect (probably) who envisioned this first colossal stone monument in a long line of Pyramids that should follow. Nobody really knows just why it was finally designed that way and why Imhotep deviated from the traditional mastaba layout in such a monumental way.

I’m going to leave the speculation to archeologist and para-scientists and leave you with the fact that both Djoser, but especially Imhotep (who would later be deified for his deeds) succeeded in attaining immortality – if only in our thoughts.

PS: Have you checked out my detailed 14 days Egypt itinerary yet? Saqqara is featured there as well!

Saqqara is best described as one big burial complex and not “just” one large pyramid. It is surrounded by a gigantic Tura limestone wall with a height of 10.5 meters and 13 false doors. Only one will get you inside through a long collonade. This collonade is still pretty much intact (quite hard to believe after almost 5,000 years).

To tell you quite the truth, this was my favorite part. The entrance portal looked like it was built yesterday. It is both monumental and yet refined – a true masterpiece of Ancient Egyptian architecture.

The collonade was once roofed (today there is modern concrete protecting the unique pillars). Each pillar was chiseled to look like a bundle of plant stems and reached a height of 6.6 meters. Interestingly enough, these early columns were not, in fact, freestanding yet. They were attached to a supporting wall behind them.

Once you leave the collonade, you enter a huge courtyard with smaller temples and various places for important rituals to guide the pharaoh into the afterlife.

To the south of the court, you will also be able to see the deep shaft into the south tomb. Just why there is another tomb remains disputed. As Saqqara appears to be one gigantic architectonic playground, current evidence suggests this was an earlier, unused tomb.

Note: Ever since March 2020, you can once more enter the pyramid after it was renoved for 14 years!

Right next to the Pyramid of Djoser hides one of the secret highlights in Egypt: The Mastaba of Mereruka. Mereruka was the vizier of Pharaoh Teti (who founded the 6th dynasty of the Old Kingdome Period of Egypt). Mereruka’s mastaba is the largest in Saqqara and a true must visit.

The tomb with its 33 rooms shows vivid everyday scenes. See, if you go to the valley of the kings, you will see almost the exact scenes in every single tomb. There, every scene is laden with ritual significance and occult portents. Mereruka’s mastaba is more or less the exact opposite.

You will see hunting and fishing scenes, and even a couple of dwarfen jewelers at their handicraft. You really do not want to miss this authentic glimpse into ancient Egyptian everyday life!

Northwest of the grand step pyramid hides another little gem: The Serapeum of Saqqara. This was a unique burial place of Apis bulls – thought to be the incarnations of the ancient Egyptian deity Ptah. Once a long boulevard of 600 sphinxes lined the way into the temple.

The Serapeum is not always open, and you should know that the choicest statues are now on display inside the Louvre in Paris. Still, if you got the chance, you really should take your time to visit this unique underground temple. There are some beautiful sarcophagi on down there.

Where is the Saqqara pyramid located?

The Saqqara necropolis is located 30 kilometers from the Cairo city center. It will take about 60 minutes to get there by car and it’s best combined with a visit to the Pyramids of Giza.

There is no public transport, but frequent Pyramids tours that will get you. I hired a private guide who also showed me around Memphis, but if you don’t mind the crowd one of the many ‘Pyramids of Giza and Saqqara bus tours’ will get you there just fine. The Pyramids of Dashur are not that far away, so you might want to add that to your bus tour as well.

How to pronounce Saqqara?

Saqqara or Sakkara is pronounced as /səˈkɑːrə/. If you are not familiar with the IPA-notation, it’s like sa-kA-ra, where the first and the third “a” is weak (like in ago, as opposed to the middle a, which is more like in palm).

The Egyptian Arabic the pronunciation is a bit different. It’s written as سقارة and pronounced as [sɑʔˈʔɑːɾɑ], which actually sounds a bit like Sahara. There is a long glottal stop in between (like in uh-oh), so more like sa-aaa-RA.

So, hope you learned everything you need to know about visiting Saqqara, Egypt. You can easily visit on a day trip and I’m sure you will enjoy it.