Home Travel Tips Egypt vs Morocco – which country should you visit? 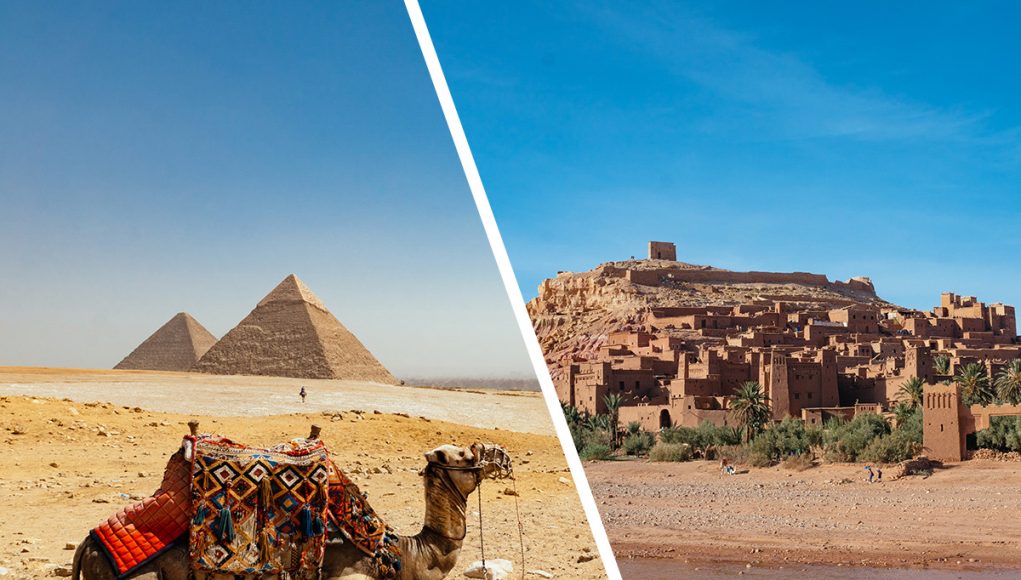 A detailed look at Northern Africa’s most popular tourist destinations – Egypt or Morocco? Which country is better?

Are you planning a trip to Northern Africa? And now you are wondering about the main differences between Egypt vs Morocco? Well, then you came to the right place!

I’ve been to both amazing countries and covered them extensively on my blog. There are so many things to do in Egypt and Morocco as equally dazzling tourist attractions. They are, however, quite different. In this travel guide, I’ll show you which country is more suitable for you.

But mark my words: I don’t believe for a second that neither Morocco or Egypt is better than the other. It just boils down to personal preferences. Are you a fan of exploring ancient temples three thousand years or old? Or do you want to lose yourself in medieval markets smelling of spices, leather, and tea? Do you want to go snorkeling? Or are you more into hiking through a remote Beduine village?

So, let’s take a closer look, shall we?

Note: Make sure to read my detailed Egypt Travel guide as well

If you are looking for a current assessment of the situation, read my guide on whether you should book a trip to Egpyt now or not.

First of all, let’s see what Morocco and Egypt got in common. Both are, quite obviously, located in Northern Africa. Both are predominantly Muslim, though there is quite a large Coptic (=Christian) minority in Egypt. The climate in both countries is very arid and big parts of each country is a desert.

So, whether you walk through a market in Cairo or in Rabat, you actually won’t notice that much of a difference. You can visit beautiful mosques in both countries and it does have the same general “Arabian” vibe. The food shows a similar influence.

So, what are the main differences?

Egypt is home to one of the oldest civilizations on this planet. Just a short ride from Cairo Airport will get you to the Pyramids which were built 4,700 years ago (Saqqara is the oldest). Life in Egypt has always been dominated by the mighty river Nile. Which is both the longest River in the world and the only one flowing from South to North.

Nile Cruises are a popular way to explore the ancient Egyptian temples in Luxor and Aswan. A lot of tourists even make their way down to the border to Sudan and explore the Nubian temples and visit Abu Simbel.

In Cairo and Alexandria in Nile delta, you will be able to explore the Islamic past of the country, which is equally as impressive. A lot of European tourists also visit Hurghada and Sharm el-Sheik on the Red Sea to go snorkeling (one of the best spots in the world) and enjoy some quality time at the beach.

Of course, there is also the desert. Places like the Siwa Oasis come to mind or the Wadi Hitan (The Valley of the whales). But it’s generally a lot less developed than in Morocco.

Morocco’s ancient Beduine culture didn’t leave behind as impressive temples and tombs. But there are a few amazing places, like Quarzazate and Ait Benhaddou, where the winds haven’t carried away the adobe walls into the desert long ago.

Marrakesh is probably the main highlight of the country. The city and it’s gigantic market Jemma el-Fnaa is nothing short of intoxicating and is actually also home to quite a lot of amazing luxury hotels where you can get pampered and enjoy a traditional Haman.

It’s much easier to get in contact with the local culture here than in Egypt – especially if you visit the medieval imperial cities of Meknes or Fez. In places like Volubilis, you can even explore the ancient Roman past of the country.

Deep down in the desert, you can follow the winding tracks of ancient caravans, while the rough Atlantic coast is the home of some beautiful fishing towns (like Essaouira or Agadir). It’s not the best for swimming, but perfect for surfing. Generally speaking, Morocco is quite a bit greener and colder than Egypt (or let’s say not as blistering hot).

I would visit Egypt if…

I would visit Morocco if…

Morocco or Egypt – which country is safer?

A lot of people traveling to Islamic countries are worried about their safety And after 9/11, who could fault them? So what about Egypt or Morocco? Are they safe to visit? Which one is safer?

Generally speaking, both countries are perfectly safe to visit. I would like to use this opportunity that Iraq, Afghanistan, and Syria are quite a bit away and it’s kind of insensitive to project your prejudices on a country solely based on the religion.

Did terror attacks happen in Egypt and Morocco? Yes, they did. But there were attacks all over Europe and the U.S. as well. This is sadly a fact you will have to face almost no matter where you travel these days.

The living standards in both countries are considerably lower than in the western world. Especially Egypt faced quite some hardships in the past decade and is only slowly on the way of recovery. As a result, you will face minor scams in both countries – but if you are vigilant, it’s nothing you need to worry about.

Based on the statistics, Morocco is a bit safer than Egypt, though there is an ongoing conflict with Western Sahara.

Egypt vs Morocco: The final verdict

Egypt is the perfect place for people who love to explore ancient world wonders and spend time on the beach. Morocco, on the other hand, is perfectly suitable for people who want to explore medieval markets and breathe in the unique vibe of the Beduin culture.

I personally couldn’t say what I liked more: Egypt or Morocco. I am a huge fan of archeology, so naturally could think I loved Egypt more. But when we drove through the beautiful adobe towns boarding the Sahara in the south, you probably could hear my jaw dropping all across the ocean.

Egypt will leave you speechless because it is hard to accept these tombs and temples are really 3,000 years old and look like they were built just yesterday. Morocco is more of a place where you can dive into a culture and really experience it. In Egypt, you are a bit more separated from the locals and everyday life. In short: Visit both *smirk*

So, this was my guide to the main differences between Egypt vs Morocco. I hope I was able to give you some good pointers. Feel free to ask your questions below 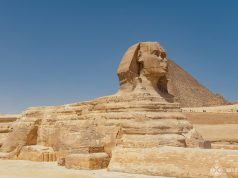 The best time to visit Egypt