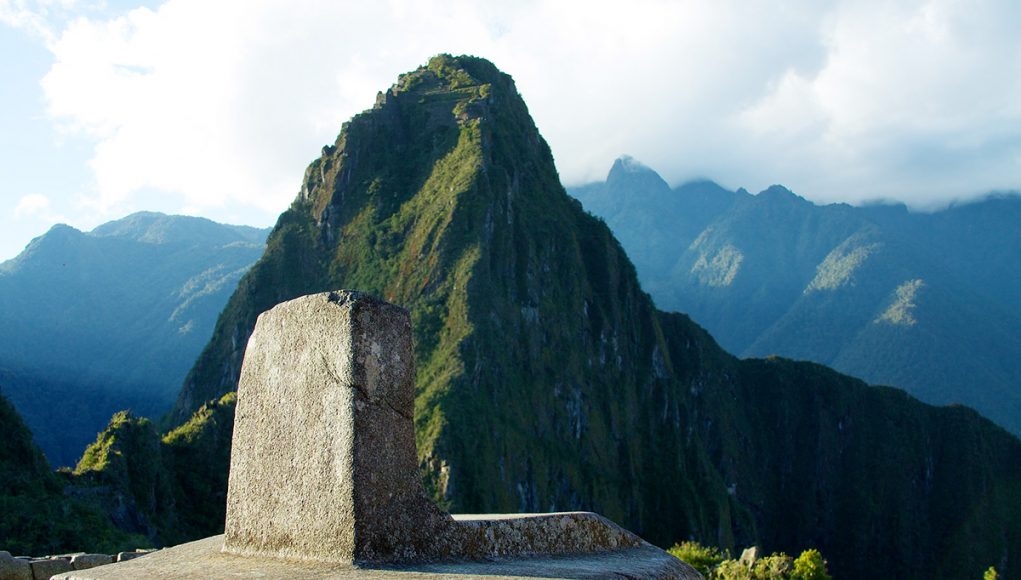 Machu Picchu is unique. Certainly, there is the spectacular setting and its utter beauty. But the ancient Inca ruins is also famous for its pristine architecture and especially for the only surviving intact Intihuatana (there is another one in Pisac, but not as imposing); a mysterious device that clearly was used for astronomical observations and ritual ceremonies.
________
Planning a visit to the Inca citadel? Don’t forget to check out my ultimate Machu Picchu packing list

Intiwatana (Intihuatana is the more commonly used Spanish reading) translates from the native Quechua language as “place to tie up the sun”, with inti being the word for sun, wata being the verb root for “to tie” or “to hitch”, and –na a suffix indicating tools or places. Please be aware, that this is actually NOT the name the Inca originally gave the stone. This is a made-up construct, due to the fact that there are no written records (a problem with most Inca sites). It is thus sometimes referred to as

It is thus sometimes referred to as Saywa or Sukhanka stone. Just know that neither of them is right or wrong. Just for the record – Machu Picchu is just a made up name as well. If you want to know about the Inca ruins and its history, read my ultimate guide to Machu Picchu.

Anyway, here is all you need to know about this unique stone:

Appearance & function of the Intihuatana stone in Machu Picchu

Machu Picchu’s Intihuatana has been carved from a huge slab of rock, standing on the highest elevation within the Inca citadel. This part is often called the Sacred Plaza. It follows a tiered, pyramid-like setup, with a small rock needle at the top. Through its high elevation, it is thought to connect the different levels of the Inca mythology (Hana pacha, Kay pacha, Ukhu pacha; Spiritual World, Now, Underworld) in one focal point. (read more about Machu Picchu’s architecture here)

The four sides of the Intihuatana represent the 4 cardinal points (north, south, east, and west).

Its primary function was most certainly astronomical. It looks a bit like a sundial, and that is actually not far away from the truth. During the two equinoxes (so March 21st and September 21st) the sun stands directly above the Intihuatana – creating no shadow whatsoever. This is only possible because the upper part of the Intihuatana stone has an inclination of around 13 degrees. The fact alone is marvelous since similar stones in the area of Quito didn’t require this angle and hint and the grand depth of the astronomical knowledge of the Inca.

It is believed that the Inca held ceremonies on these auspicious dates. These ceremonies were meant to hold the sun in place, ensuring a good harvest and general prosperity.

The Intihuatana is often wrongly associated with the solstices – but that is a myth. Only the Temple of the Sun (a few hundred meters away) casts an auspicious shadow on that date. The Winter Solstice festival is known as Inti Raymi and is still being celebrated in Cusco each year.

That being said, the Intihuatana shows an alignment with the December solstice. On this date, the sun sinks behind the Pumasillo mountain and at sunrise, the light projects a triangle which highlights two concentric circles on the floor.

The whole scope of functions of the Intihuatana is unknown. We can tell for sure, however, that the unique stones were one of the primal focus points of the Inca religion. The Spanish destroyed them in all known cities of the Incas – save for Machu Picchu, which they never discovered.

Looking closely at the Intihuatana you will see many little steps and other dents. The purpose of these is not known. Some of them probably served astronomical purposes, while others were most likely of ceremonial importance – perhaps for the placement of sacrifices or mummies of holy ancestors.

One myth, for example, says, that the Inca believed that tying the sun to stones like these on auspicious dates prevented her from going down for good. For even the Inca knew, that if the sun goes out, all life would come to an end.

To give you an idea, just how much was lost. It was only in 1920 and by sheer coincidence, that the German astronomer Ralf Müller became aware that the two largest sides of the Intihuatana facing 25.5 degrees off the magnetic north and 27.5 degrees off the magnetic west. He thus was able to figure out they would point in that direction at the beginning of wintertime and summertime. Before Ralf Müller and Hiram Bingham (who is believed to have coined the name Intihuatana), nothing was known about the stones in the western world. Weirdly enough, William Prescott possible wrote something about the Intihuatana way before, in 1847 to be precise.

“The period of the equinoxes they determined by the help of a solitary pillar, or gnomon, placed in the center of a circle, which was described in the area of the great temple and traversed by a diameter that was drawn from east to west. When the shadows were scarcely visible under the noontide rays of the sun, they said that ‘the god sat with all his light upon the column.”

This was written 64 years before the rediscovery of Machu Picchu. But obviously, there are many different cultures around the world celebrating important celestial events. It remains without a doubt, however, that the Inca were an agricultural society. Especially so high up in the mountain, only seeding the fields on the correct dates and times of the year prevented famine and crop failures. It is beyond likely, that the Intihuatana and a couple of other devices must have helped in determining these dates.

There is one other site in Peru, where another Intiuatana stone survived. In Pisac, not that far away from Machu Picchu (roughly 85 kilometers), you will be able to see another Intiuatana. Most tourists just visit the upper regions (or citadel) of Pisac, but if you walk about 30 minutes down into the valley, you will see the highlight. Here a very complicated and pristine temple district survived. In the middle, you will be able to find a structure with curved walls (thus indicating it is a temple of the sun). Inside this temple is smaller Intiuatana, little more than a small rock needle (perhaps 30 centimeters high).

Note that, here as well, the Intiuatana was carved from the natural bedrock. It’s quite tempting to attribute this to the hitching process. The Incas wanted to chain the sun to the earth, to the here and now, but possibly also looked for a connection to the spiritual world. Thus they were possibly looking for an unbroken link to these spheres of Inca mythology and didn’t craft it anew like one would a statue.

In years before visitors were allowed to touch the Intihuatana. But after a lot of incidents (and some naked transgressions), the holy stone is now partitioned off. There is a permanent security guard watching all tourists (Read more about the dark side of Machu Picchu here). Previously visitors had placed their hands on the stone to absorb the positive energy the stone is believed to be a focal point for.

The Intihuatana suffered some damage during the shooting of a beer commercial when a 1,000-pound crane dropped on the upper tip of the stone. A small portion chipped off, leading to an uproar among the natives. The National Institute of Culture filed a lawsuit and sued the beer company in 2005.

Want to know more about Machu Picchu? Here are some reading recommendations: 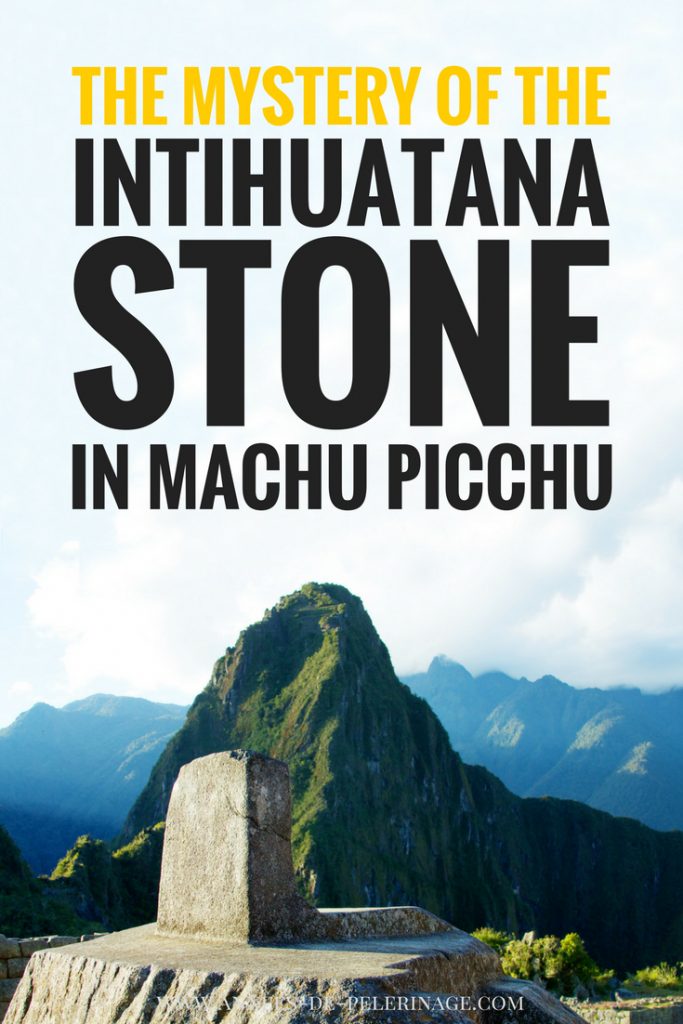