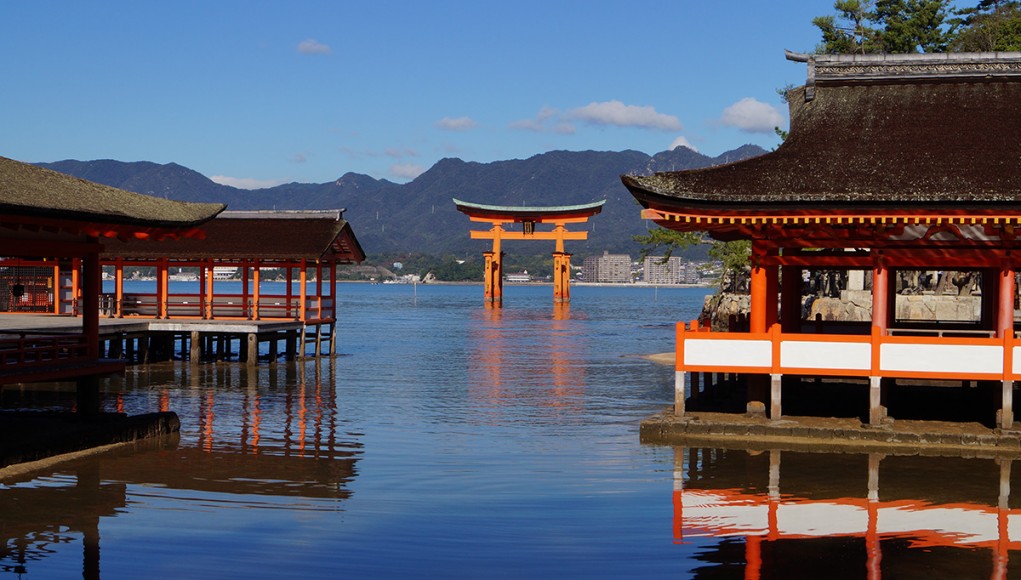 Itsukushima Shrine is a UNESCO World Heritage Site located on Miyajima Island in Japan. The Shinto shrine is best known for its red torii gate floating in the water.

Visitors on the island of Miyajima along Japan’s Inland Sea cannot miss the giant red torii floating in front of the bay. The world-famous vermillion gate marks the entrance to the sacred ground of the Itsukushima Shrine. In fact, the o-torii, how such big torii are called in Japanese, is for some tourists the only reason for their visit (it’s certainly why I featured it in my Japan itinerary).

Millions of postcards, calendars, books, and advertisements around the globe use the iconic architecture of the spiritual gateway to symbolize Japan as a whole. No other symbol, barring perhaps the Fujiyama and Tokyo’s busy pedestrian crosswalks, is so readily identified with the country among westerns (if you like to check out other must-sees in Japan, read my guide).

Note: I compiled a guide to the best things to do in Miyajima, you really should check out if you plan to visit!

History and significance of the Itsukushima Shrine

No one knows exactly when the first religious buildings have been erected on Miyajima. These days the earliest records date back to the 6th Century AD. A guy called Saeki Kuramoto is said to have erected a shrine here in 593. The current version of the shrine, however, can be traced back to a reconstruction phase under Taira no Kyomori in 1168. The style is called the Shinden style and can be found in Kyoto as well.

The whole complex of the Itsukushima Shrine consists of 37 buildings and 19 outbuildings on the shore. Due to typhoons and the corrosive salt waters, probably nothing of the old structure remains to this date. However, the buildings and poles have been continuously replaced ever since and the shrine is said to remain virtually unchanged from what it looked like almost 1000 years ago.

Why the temple has been built in the water remains unclear. It might allude to the fact, that the temple is dedicated to three daughters of the sea goddess Susano-o no Mikoto. It could thus be a skillful rendition of the mystical Rygu-jo (A dragon palace under the water). Another legend ties the design to ancient Buddhist believes since the dead can only crossover to paradise by boat.

By boat is also the only access to the sacred island of Miyajima. So there lies another significance in the fact that the temple is located on the water rather than on the island itself. It can be seen as a way to keep the island pure.

Actually, in ancient times commoners weren’t allowed to enter the sacred island at all. Those few pilgrims that were allowed had to take their boats through the big red torii and dock at the shrine’s pier. Even today no deaths or births are permitted on the island. Burials are forbidden on Miyajima too.

About the torii of Itsukushima Shrine

The most prominent feature of Itsukushima Shrine is certainly its giant red torii located some 200 meters in front of the main complex. The gate, seemingly floating on the water, is constructed from camphor wood. A wood that is especially rot-resistant. It is painted with vermilion lacquer as another means of protection against corrosion. The gate has been added when the shrine was reconstructed in 1168.

But the Itsukushima Shrine burned down a couple of times in the meantime. It is also doubtful that, even without such calamities, the wooden construction would have lasted a thousand years. It remains a fact, however, that the current 16-meter high gate dates back to 1875 (using the design established in 1547).

Unlike most other torii throughout Japan, the o-torii of the Itsukushima Shrine features six legs instead of just two. Each main pillar gets support from two additional, smaller legs. The shrine thus reflects the principle style of a Shinto sect called Ryōbu Shintō. The pillars are not buried in the seabed but rather stand on their own weight.

To help to stabilize this section of the intertidal zone in front of Miyajima pine stakes have been driven into the sand around the torii. Other than that the box-shaped upper part of the Red Gateway has been stuffed with roughly seven tons of stones to prevent the gate from being washed away.

On top of the giant red torii of Itsukushima Shrine, you will find a black plate. There is a moon painted on the one side and on the other a sun (among some calligraphy). This iconography can be traced back to the teachings of Feng Shui, where the northeasterly direction marks a demon’s gate. The sun, however, can block this demon’s gate, hence the painting on the plate.

It also remains a highly controversial debate among scholars that torii is actually nothing else but chicken roosts. This could be another hint, why there is a sun painted on the plate. The mythological story goes that the highest goddess in Shinto (Amaterasu = the sun goddess) hid once in her heavenly cave and the world became dark. To lure her out again an annoyingly crowing cockerel had been placed in front of her cave on a roost. Which ultimately worked and the world was once again clad in light.

These days Itsukushima Shrine is open to the public for a small fee of 300 yen per person.

The shrine will be open to the public throughout the year with no closing days. At night the giant red torii will be illuminated by lights. As a tourist, you should check a tidal chart before your visit. During high tide, the red torii will appear to float on the water. During low tide, you can actually walk all the way up to the pillars of the torii.

Depending on your preferences you should time your stay accordingly.
There are also many tour operators on the island that will take tourists on a boat through the Bay of Miyajima. Tours will typically last around half an hour. During high tide, you can actually drive through the torii! Tickets for such a cruise can be bought along the promenade leading to the temple from the ferry port.